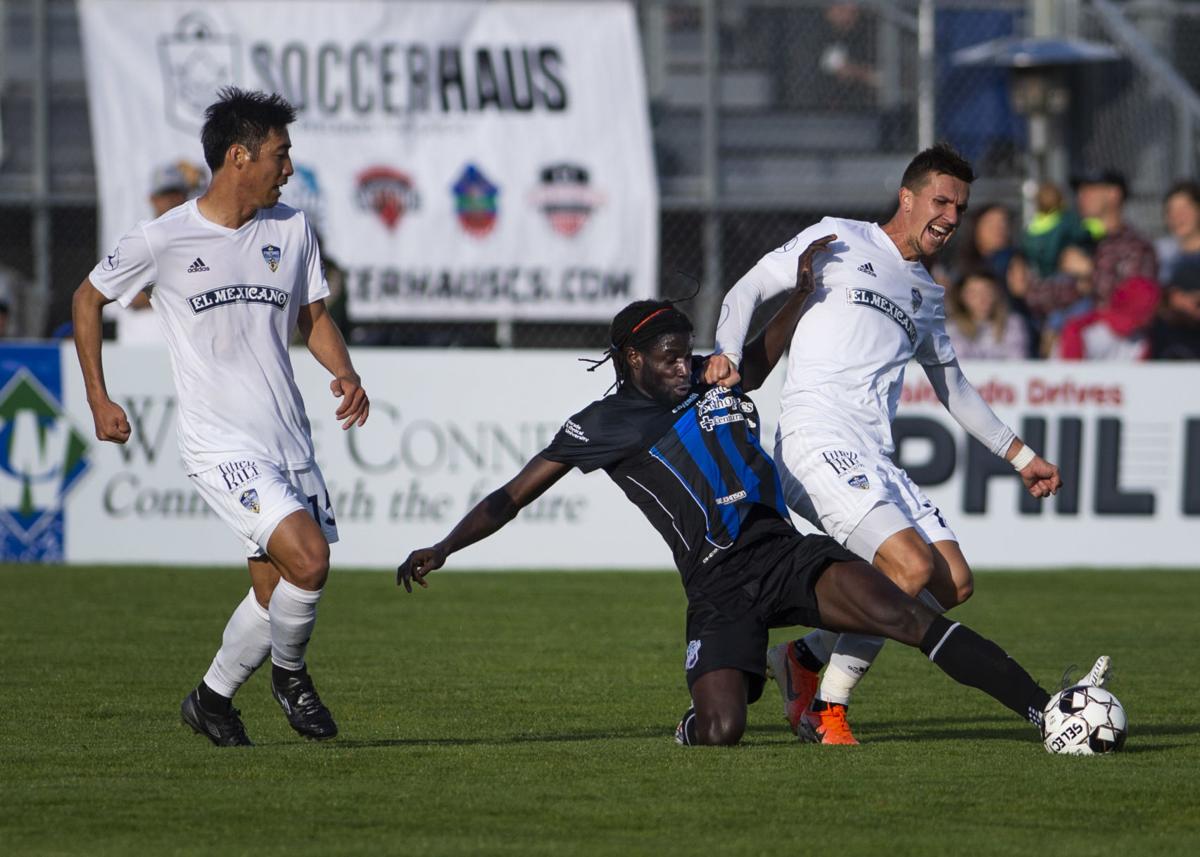 The Switchbacks’ Ismalia Jome slides to steal the ball June 1 against Fresno FC at Weidner Field. Jome is the only Colorado Springs player with multiple goals and assists. 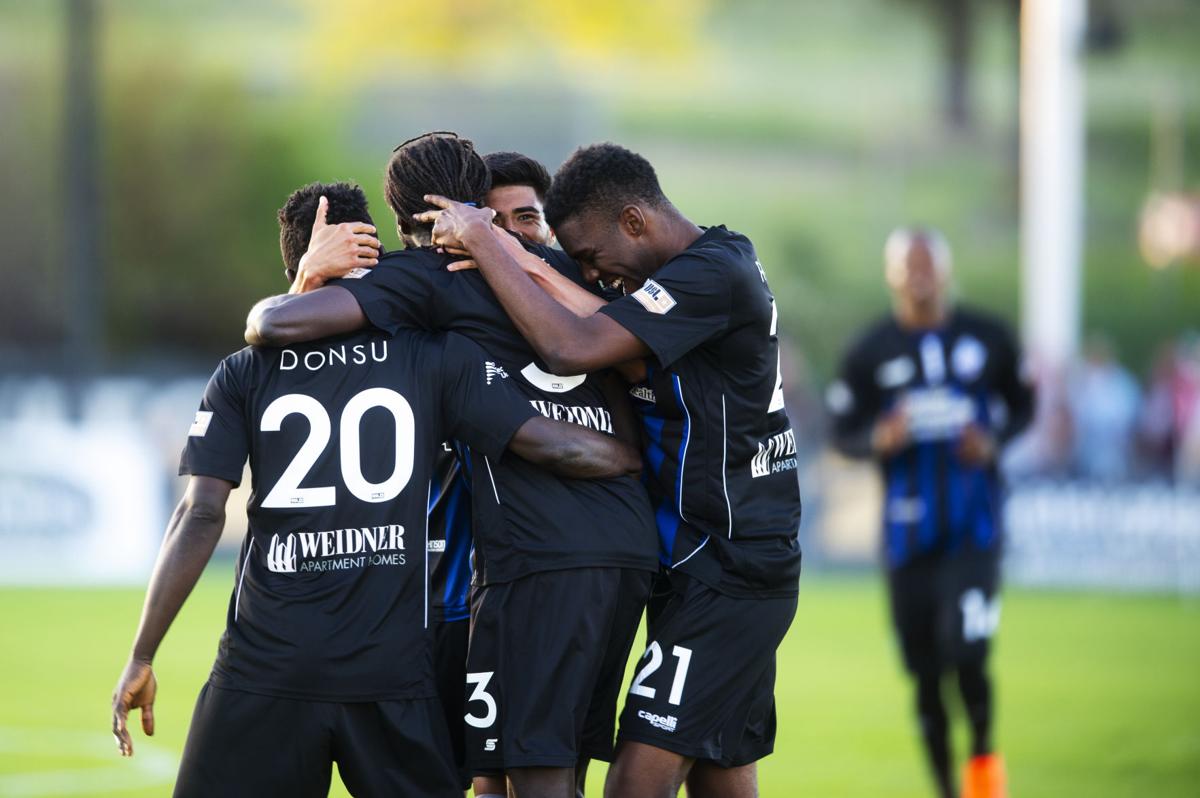 Ismaila Jome (3), Kwasi Donsu (20), Kris Reaves (21) and Rony Argueta (6) celebrate after Jome scored the third and final goal late in the second half of the Switchbacks game against the Tacoma Defiance on June 9.

The Switchbacks’ Ismalia Jome slides to steal the ball June 1 against Fresno FC at Weidner Field. Jome is the only Colorado Springs player with multiple goals and assists.

Ismaila Jome (3), Kwasi Donsu (20), Kris Reaves (21) and Rony Argueta (6) celebrate after Jome scored the third and final goal late in the second half of the Switchbacks game against the Tacoma Defiance on June 9.

Some 30 minutes after the Switchbacks finished training Thursday — when players wore jackets on a warm day to prepare for expected heat during Saturday’s game at Rio Grande Valley — Ish Jome had to be pulled off Weidner Field where he was still working on set pieces.

The fear was the left back might run out of energy as the Switchbacks look to win a third straight league match, but Jome is well-read on the subject of human performance, and others. Jome said it’s a competition between him and central midfielder Jordan Schweitzer for the title of biggest bookworm on the team.

Jome’s recent favorites include “Rich Dad Poor Dad,” “High Performance Habits” and “The Endurance Diet,” which seems useful, as Jome has played all 1,260 minutes of the first 14 league games.

“That’s just about getting the best of yourself athletically,” Jome summarized while sitting on the bench as the city workers finally took their mowers to the field, “just about (how) you should be eating or finding the right diet for you that’s healthy and gets the best out of your body.”

The other books feature glimpses into what could be possible careers once Jome hangs up the boots. He took the advice of a recently retired Major League Soccer player and explored other interests before playing days expire.

“I’m just reading about things I’m interested in like stocks and stuff like that. I’ve gotten a lot more into that,” Jome said. “I’ve kind of taken that (advice) to heart and really explored and delved into other things that I would be interested in.”

His more immediate focus is helping the Colorado Springs continue a climb into a Western Conference playoff position.

“If we can keep our defense tight and capitalize on our scoring opportunities, we should be able to rebound our season,” Jome said.

Though a member of the back four, the modern game and the Switchbacks’ system adds some responsibility to get forward, serve crosses into the box and create in the final third.

“That’s part of our attacking thing, getting our outside backs involved,” coach Steve Trittschuh said.

Jome is the only Switchbacks player with multiple goals and assists after scoring late in last week’s 3-0 win over Tacoma, earning a second consecutive appearance on the league’s Team of the Week for his work on both ends.

Jome ventures farthest forward among a now seemingly consistent back four, which includes Kris Reaves — another big reader who was disqualified by Jome because “Kris is in school right now, so he has to read,” — and Abdul Rwatubyaye at center back and Ibrahim Yaro on the right. Though Yaro’s natural position is in the middle, the group has — with help from Schweitzer and Rony Argueta in the midfield and Andre Rawls in goal — seemingly come together over the past month after a shake-up in response to Jamal Jack’s injury and the acquisition of Rwatubyaye on loan from Colorado Rapids.

“That’s really helped us, to have that consistency and be able to defend better as a back four and a team,” Jome said.

Like Rwatubyaye and a couple of other teammates, Jome has cashed MLS checks, helping Minnesota United jump from the North American Soccer League in 2017. He joined the Switchbacks from Nashville SC, which is preparing to join MLS in 2020, prior to the season, and filled the void at left back created by Josh Suggs signing with New Mexico.

Getting back to the top flight remains a goal, and though he admits there are instances he thinks that’s where he belongs, he says he doesn’t allow himself to obsess over it.

“Everyone’s path is different,” Jome said. “I try to just focus on what I can control.”

His goals off the field include going back and getting a degree from UC Santa Barbara after he left to pursue a professional career during his junior year.

“I have like a quarter left, and I’ve been trying to find a way to finish it, but I have to be there, like physically,” he said.

For a kid who moved from Gambia in West Africa to Minnesota at 6, there are worse places to be, and while California’s sunshine and beaches remain his preferred climate, he’s warming up to the Springs.

“The weather has been a lot nicer recently, so that’s helped,” Jome said. “I like it so far.”

And should an early summer thunderstorm move him inside, he’s good with that too.

Winger Shane Malcolm got back to Colorado Springs on Wednesday night after helping Guam advance in World Cup qualification, practiced Thursday and traveled with the Switchbacks Friday ahead of Saturday’s game.

Should Malcolm, who scored in a 5-0 win over Bhutan, need some time off his feet after lots of travel, the Switchbacks will have a little more depth on the wing and in the attack, as recent signees Austin Dewing and Tucker Bone are expected to travel to Rio Grande Valley for a possible professional debuts.