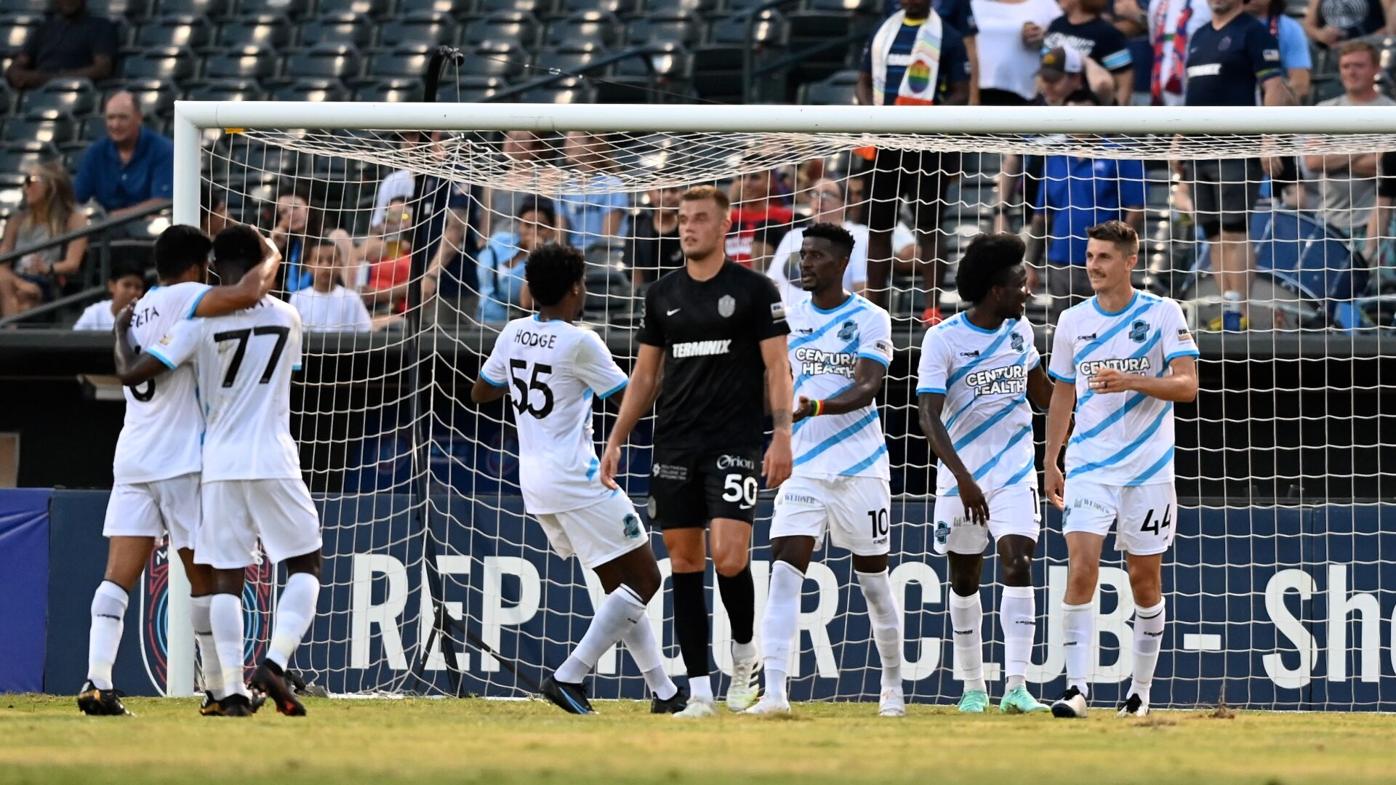 Switchbacks players celebrate after Hadji Barry, third from right, converted a penalty kick to give his club a 1-0 lead in the first half of Tuesday’s game in Memphis. 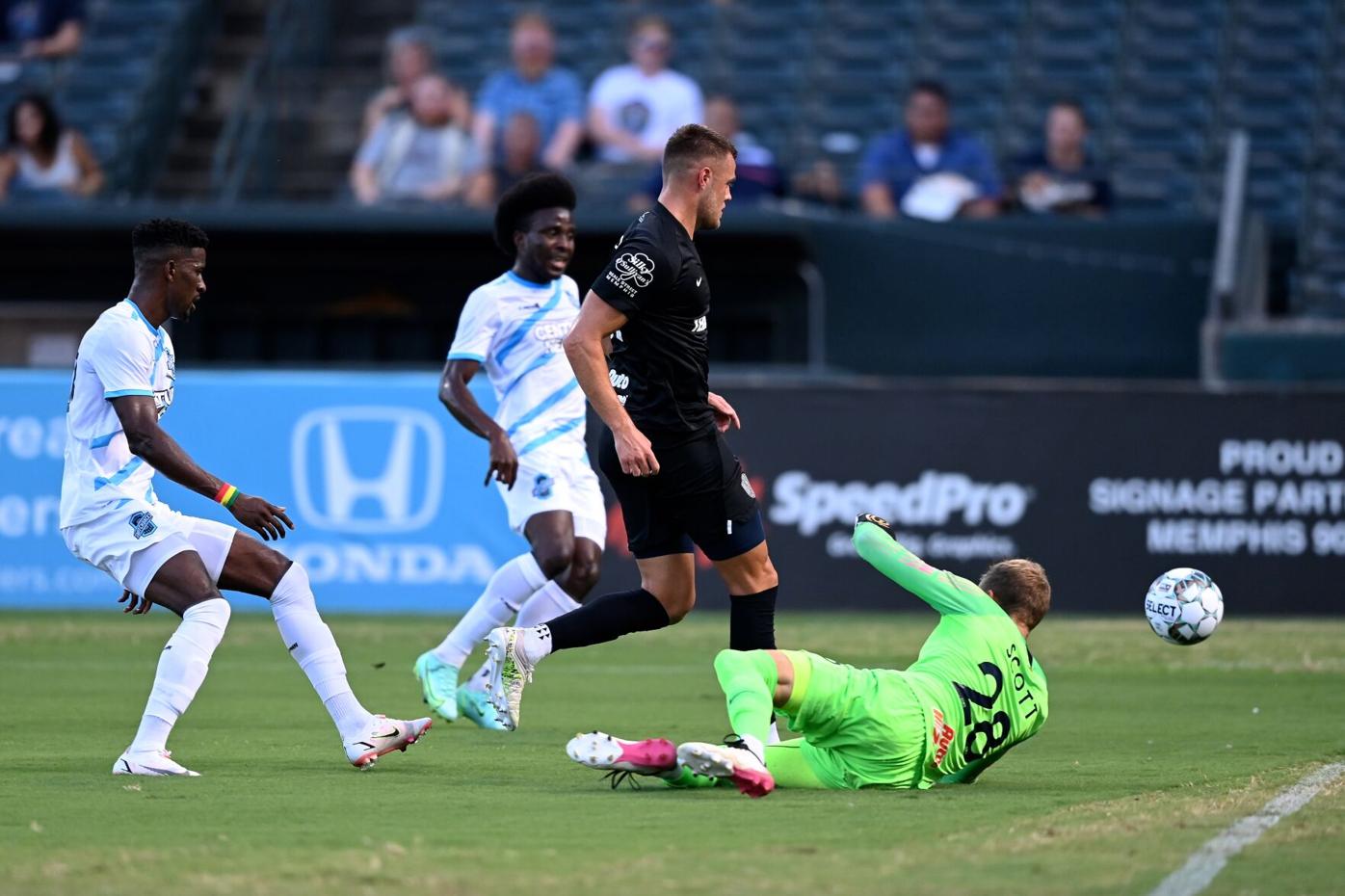 Switchbacks players celebrate after Hadji Barry, third from right, converted a penalty kick to give his club a 1-0 lead in the first half of Tuesday’s game in Memphis.

The first ever meeting between the Colorado Springs Switchbacks FC and Memphis 901 FC ended in a 1-1 draw Tuesday at AutoZone Park in western Tennessee’s Bluff City.

AutoZone Park is also the home of the Memphis Redbirds Triple-A baseball team.

Both scores were a result of penalty kicks in a match that saw a combined 10 yellow cards, five on each side.

Switchbacks striker Hadji Barry gave his club a 1-0 lead in the 34th minute when he blasted a shot past Memphis goalkeeper Brady Scott.

It was Barry’s USL Championship-leading 16th goal in 17 games. The man from Guinea is only nine goals back of Cameron Lancaster’s league record of 25 goals in a regular season, set with Louisville City FC in 2018.

Barry has 15 games remaining to try and set a new league mark.

Barry’s goal was set up when Scott tripped Switchbacks midfielder Andre Lewis in the box as Lewis was racing toward the goal.

Earlier in the day, Lewis was named to the league’s team of the week for Week 16. Last Saturday he scored two goals, had one key pass and completed 33 of 37 passes overall while winning seven of 10 duels in the Switchbacks’ 4-2 victory over Hartford Athletic.

Memphis did a good job of marking Lewis as the Switchbacks dominated the first half of play with 63% possession. They managed just two shots on target. Lewis missed both of his long opportunities.

Switchbacks midfielder Beverly Makangila was forced into concussion protocol in the 24th minute when he banged his head against the grass turf going for a loose ball. He was replaced by Stevie Echeverria.

The Switchbacks (7-6-4, 25 points) had several chances to widen their lead in the second 45 minutes of play. Barry came close in 53rd and Michee Ngalina missed a golden opportunity on a breakaway chance in the 77th.

Switchbacks defender and captain Jimmy Ockford picked up his second yellow card of the night and an automatic ejection in the 82nd minute when he pulled down Memphis’ Francis Atuahene in the penalty area. That led to a penalty kick opportunity by Kyle Murphy, who blistered his team-leading ninth goal past Switchbacks goalie Sean Melvin.

The Switchbacks played a man down the remainder of the match, but neither team had a shot on target down the stretch.

The Switchbacks head to south Texas on Friday afternoon to prepare to take on Rio Grande Valley FC Toros on Saturday night at H-E-B Park in Edinburg. RGV (8-5-4, 28 points) is second in the Mountain Division. It will be the first meeting of the season between the clubs.

Ockford will miss the match as he serves a one-game suspension for his red card.