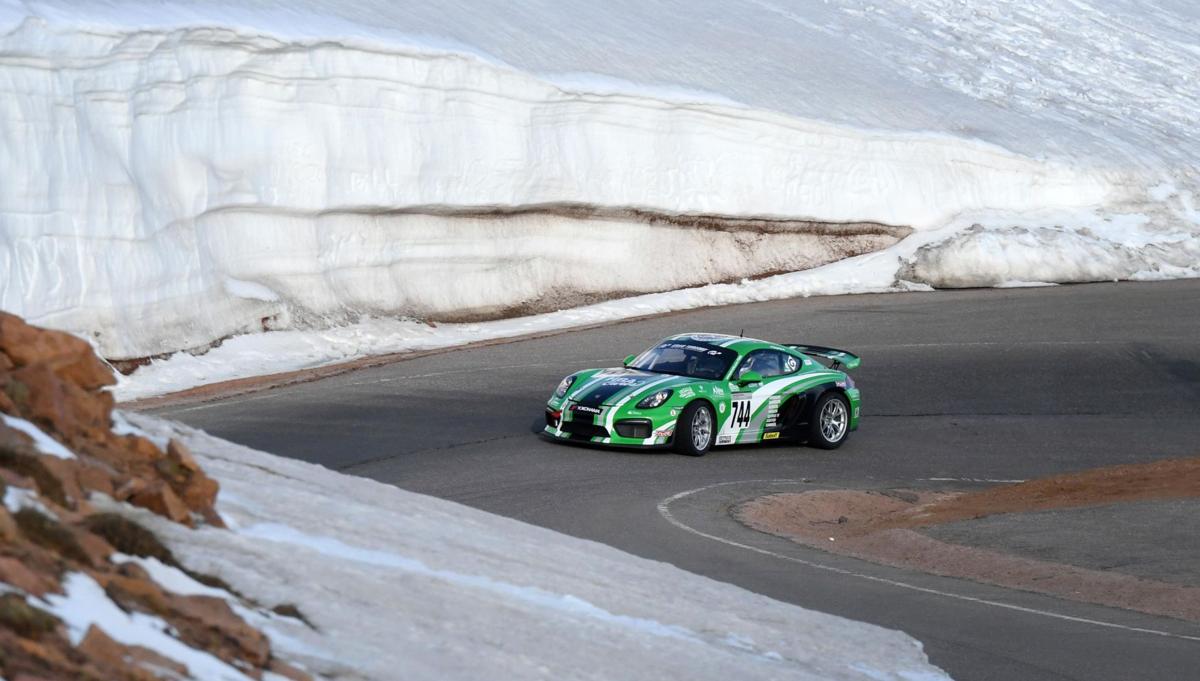 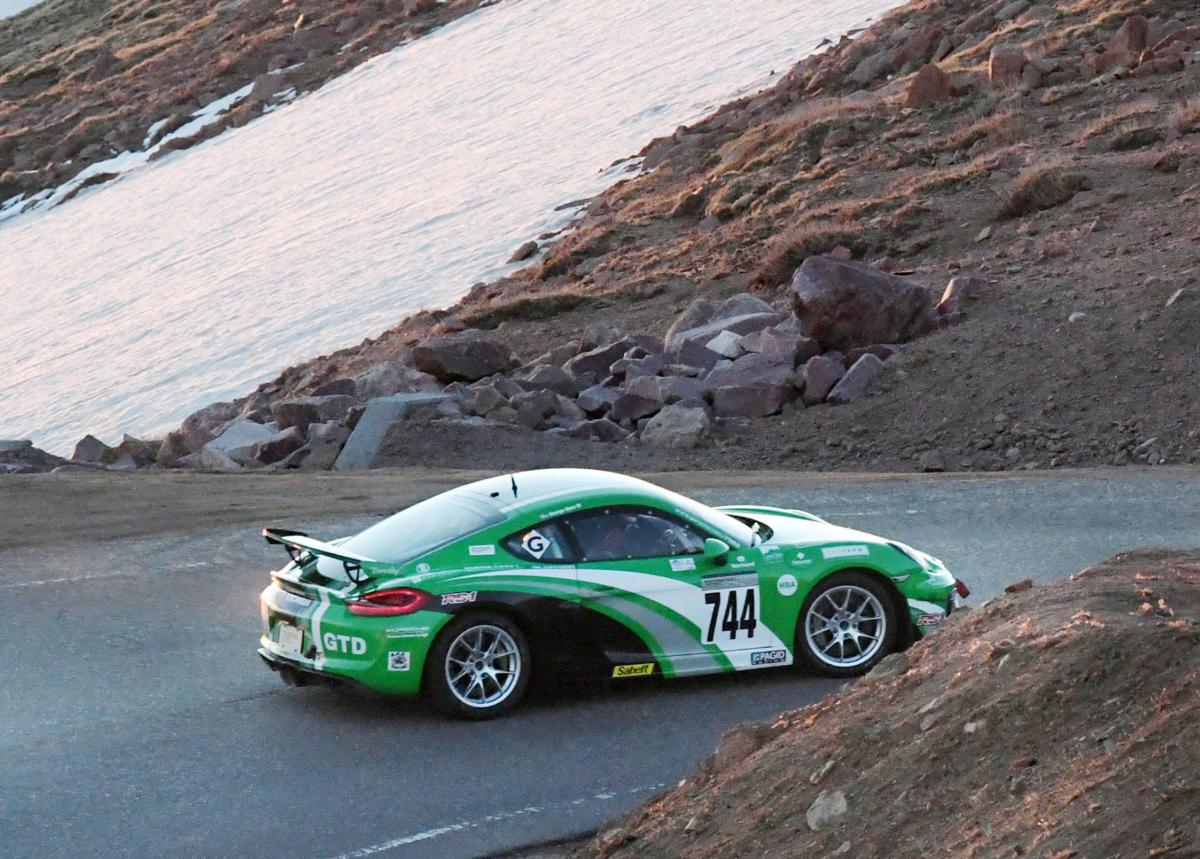 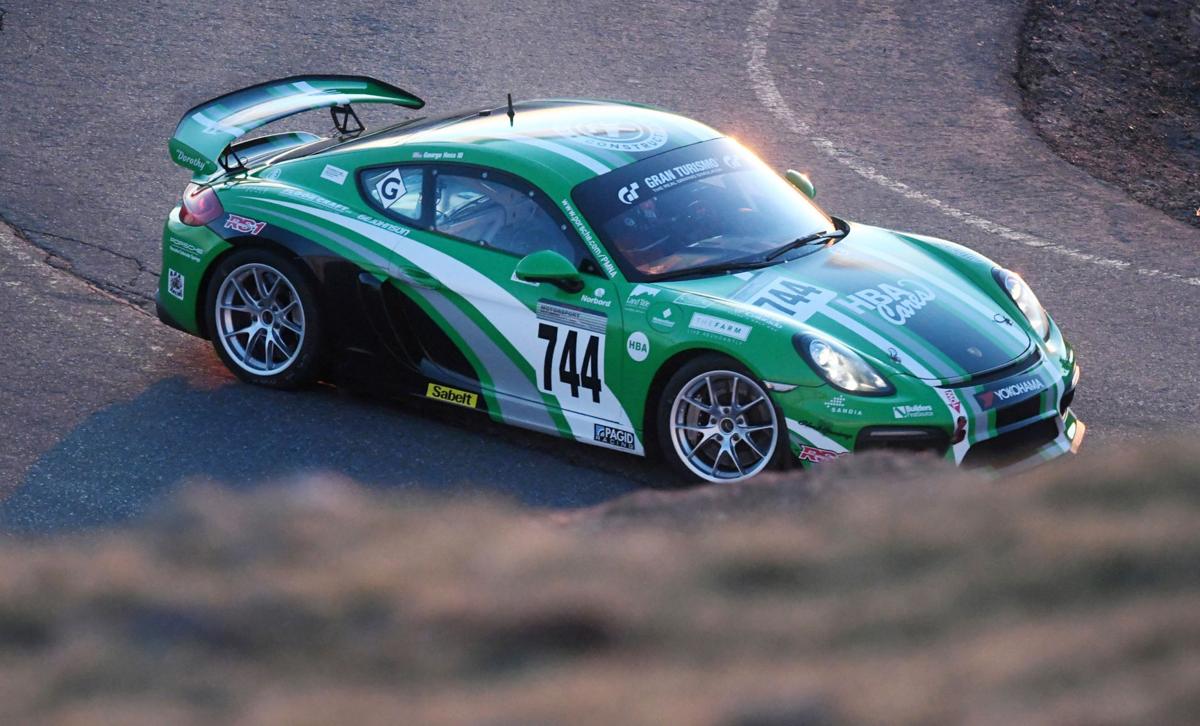 A week ago, Mike Hess found his father, George Hess III, lying in his tent with his iPad out and his headphones in.

The two were on a horseback riding trip, camping in Westcliffe with over 150 other Pikes Peak Range Riders — a nonprofit organization that focuses on charitable community activities. All the riders were out of their tents talking, eating and having a good time, except George.

He was preparing for the 97th running of The Broadmoor Pikes Peak International Hill Climb.

“We were in the middle of the mountains in Westcliffe and he was watching a simulation of Pikes Peak,” Mike said. “That’s the perfect explanation of who he is.”

Sunday, the Colorado Springs native will be racing a 2016 Porsche Cayman GT4 Clubsport in the Hill Climb. It’ll be just the third time George has raced to the top of America’s Mountain.

But George’s Hill Climb story isn’t a new one. In fact, his story started in 1976 when he raced to the clouds on a Can-Am 250 Bombardier motorcycle. He made a return to the Hill Climb in 2018, after 42 years away from the race.

“I took almost a 50-year sabbatical,” George said with a laugh.

During his time away, George stayed busy. He started a company, became a professional rodeo roper and raised two children. Now, at 64, he’s found a passion for racing again, specifically on Pikes Peak.

He’s put countless hours into training for the race, and despite his little experience, he’s become one of the better drivers in the field.

“He’s a go-getter. He goes for the gusto,” George’s wife, Barbie, said. “He puts 1,000% in everything he does, whether it be work or chores around the house or racing up Pikes Peak.”

He’s always had a need for speed

She says she didn’t realize how big of a deal it was at the time. George says it was for a different reason.

“I think she hated motorcycle racing,” George joked. “Part of it, I think, was she thought I liked them more than I liked her.”

George and Barbie have been together since they were sophomores at Mitchell High School in Colorado Springs. Their first “date” was to Cheyenne Cañon.

“I thought I was just going as a ride, not a date,” Barbie said. “And the rest is history.”

The two were married in 1978, the same year George graduated from Colorado State and started his home building company — Vantage Homes.

“His devotion to the company is why it’s been so successful and is still around 35 or more years later,” Mike said. “He’s incredibly passionate about the company. He immersed himself in it. It’s that same passion he throws in every extracurricular activity he does.”

George has always had side hobbies.

Living on a ranch, he often had “the biggest and fastest horses,” according to Mike. This led him to becoming a professional rodeo roper and joining the Pikes Peak Range Riders Foundation. He and Barbie have always had an affinity for donating to charitable organizations, like the Range Riders, earning him the Silver Spur Award in 2016 for being an “outstanding community citizen.”

But in 2018, George’s itch for racing resurfaced, an itch that Barbie says has always been there.

“He’s always had a need for speed,” Barbie said. “He just seemed like he had such a focus on cars and racing.”

George’s thought of returning to the Hill Climb came after his close friend and local driver Fred Veitch invited him to a track day. George brought his Ford Cobra Replica, a car not really built for track racing, but spotted the brand of car he wanted to race: Porsche.

“When he said he had an interest, I encouraged him to do so because he’s a very good driver,” said Veitch, who has raced in the Hill Climb the last seven years.

With Veitch’s encouragement and a car in mind, George went home and pitched the idea to Barbie. She had no problem with the idea, saying “I supported him because I knew he would have fun and be safe doing it.”

George then bought a 2000 Porsche GT3 and got to work.

He employed a personal trainer to get in shape, attended driving school to get his racing license, hired a crew to help with the technical side and started driving the road at Pikes Peak nearly every day. He became an expert in the sport, soaking up knowledge from experienced Hill Climb drivers.

“I spent a lot of time learning about and driving the road,” George said. “It’s not a race without danger. If you go into a wall, it’s not that big of a deal. But if you go off the track at Pikes Peak, there’s big boulders on one side and a lot of air on the other side.”

After just around six months of training, George made his race to the top.

“It was daunting, but we were so excited for him and all the hard work he put into just making it to the top,” Mike said. “But I knew, when he came down in the parade and started talking about how the Porsche drove, we’d be back this year.”

Similar to last year, George’s car will be covered in stickers with local sponsors, like all the other cars. But what’s different about his car, is it’s completely funded by himself and all sponsor money goes to charity.

That’s one of the biggest reasons he wants to continue to do the race.

“The community of Colorado Springs, outside of his family, is the biggest thing for him when it comes to what he dedicates his time and resources to,” Mike said. “He and mom live by the Bible verse ‘From whom much is given, much is expected.’ They see the Hill Climb as a way to give back.”

George will again be in a Porsche on Sunday, but this time a 2016 GT4. He’ll be racing in the Porsche Pikes Trophy by Yokohama Division against experienced racers like Travis Pastrana and JR Hildebrand.

While George hopes to race well and possibly win, the satisfaction of making it to the top after months of preparation is what he looks forward to most.

“There’s only 100 people a year that get to go do this,” George said. “It’s never been a bucket-list type thing, but the experience and the camaraderie and the support from everyone up there, has been outstanding.

Tyler Portillo was always destined to follow in his father’s footsteps and will race in The Broadmoor Pikes Peak International Hill Climb on Sunday.