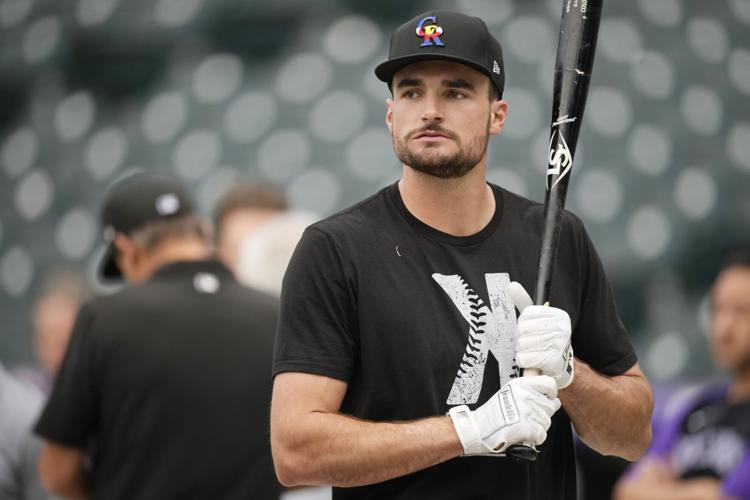 Rockies right fielder Sam Hilliard wears a strikeout ALS shirt during warmups before a game against the Nationals on Sept. 28, 2021, in Denver. 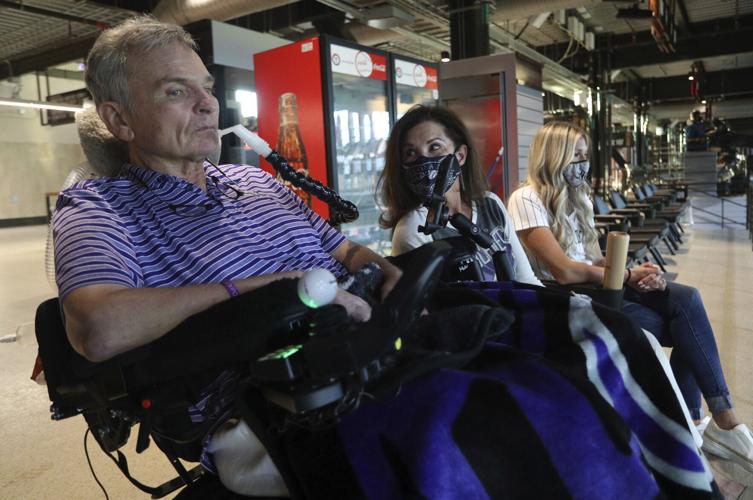 Jim Hilliard, Tamara Hilliard and Kat Minnerly watch the Colorado Rockies play against the Texas Rangers in an exhibition baseball game Tuesday, July 21, 2020, in Arlington, Texas. The Hilliards are the parents of Rockies left fielder Sam Hilliard and Minnerly, now Sam's wife, was then his fiancee.

DENVER — Sam Hilliard did the viral ALS Ice Bucket Challenge just like everyone else in 2014. He didn't know much about the disease, but he was tagged to participate and went along with it.

Four years later, the disease hit close to his heart.

Hilliard's father, Jim, was diagnosed with ALS in 2018, and died last September. His family has made it their mission to raise awareness and funds for the deadly disease, and played a major part in getting Major League Baseball to recognize Lou Gehrig Day. There is no cure for ALS.

On Thursday, all 30 teams wore patches and special red wristbands. The Rockies took it a step further, honoring the Hilliards, as well as two other families, on the field before the game. The team also wore Team Hilliard Foundation shirts during pregame warmups, and Sam Hilliard had custom cleats with his father's initials on them.

"There's a lot of emotions," said Hilliard, who did not play on Wednesday after taking a hard fall the day before. "I wish my dad was here to see it and take part in this with us. We're proud of this day that we helped put together."

The efforts to create a Lou Gehrig Day began in 2019. Bryan Wayne Galentine, a country singer and songwriter who was diagnosed with ALS in 2017, was a passionate baseball fan. He created a small committee to start the grassroots efforts. Tamara Hilliard, Sam's mother and Jim's husband, joined the efforts shortly after.

For the next two years, the group went by team-by-team pitching the day to them. The Rockies were the first to get on board, but it was a slow process to get other teams to join in. Then they got an unexpected boost from Derrick Hall, president of the Diamondbacks. He has a personal connection to ALS, and, upon hearing about the efforts, immediately sent a note to all of the other team presidents. Twenty-four hours later, all 30 teams were behind it.

Tamara Hilliard and the committee then went to MLB, and by March 2021, the day was approved and on the calendar for June 2, the anniversary of Gehrig's death.

"It's bittersweet," Tamara Hilliard said. "Obviously, I wish Jim was still here and we were fighting this battle together and able to watch him play together. It's real special."

While his mother was advocating, Sam Hilliard was climbing up through the Rockies minor league system, with his father on his mind at every step. It was hard to be away from their home, especially as his father's health declined. But Jim Hilliard wanted his son to be out there, living out his dream.

Jim Hilliard was able to make it out for Sam's debut in Denver in 2019, and he was one of the rare fans given access to games during the pandemic 2020 season. But by 2021, Jim Hilliard had to use a wheelchair and was rapidly losing muscle function. He was only able to watch his son on TV.

"I still think people don't quite understand the details of the disease, how horrible it is," Sam Hilliard said. "It's essentially a death sentence when people get diagnosed with it."

Sam Hilliard was able to get a few days off to spend with his father before his death, but he returned to the team almost immediately after. He honored his father right away, hitting a home run just days after Jim Hilliard died.

Sam Hilliard shed tears in the outfield as the emotions took over and he realized, for the first time, he wouldn't have a text from his father waiting for him.

"He kept a strong face on the entire time," Sam's wife, Kat Hilliard, said. "He's never usually vulnerable with me, but especially towards the end, he showed vulnerability. It was hard to see him like that. ... I think finishing the season was exactly what his dad wanted. He did it for him."

Now, Hilliard and his family are focused on raising awareness and funds in honor of Jim Hilliard. Team Hilliard Foundation, a 501c3 organization, donates its funds to the ALS Therapy Development Institute in Boston, which is researching treatments for the deadly disease. Sam Hilliard has become the face of the efforts.

And soon, they'll be passing on Jim Hilliard's legacy to a new family member. Sam and Kat are expecting a baby boy in October, and plan to give him the middle name James.

"I just wish my dad was here," Sam Hilliard said. "I know he would have been a great grandfather. We lose my dad, but we gain a son. We're really excited to meet him and eventually tell him about my dad."

DENVER — Starting pitching was hailed as the hallmark of the Rockies' team heading into the 2022 season.