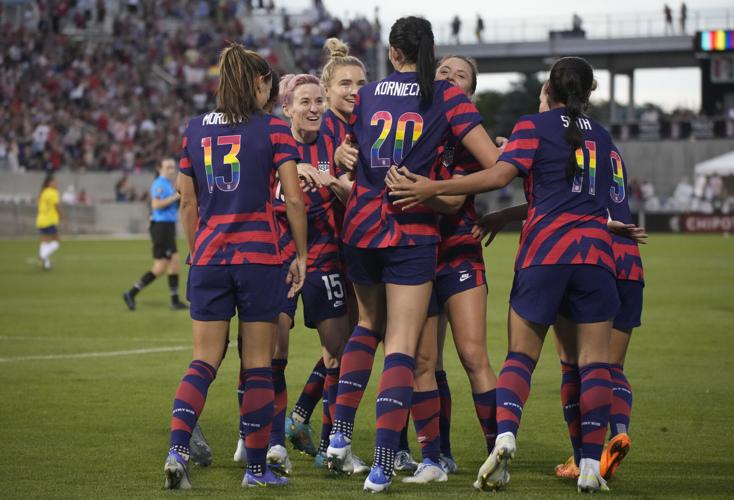 U.S. midfielder Taylor Kornieck, front center, is surrounded by teammates after scoring a goal against Colombia during the second half of an international friendly soccer match Saturday, June 25, 2022, in Commerce City, Colo. (AP Photo/David Zalubowski) 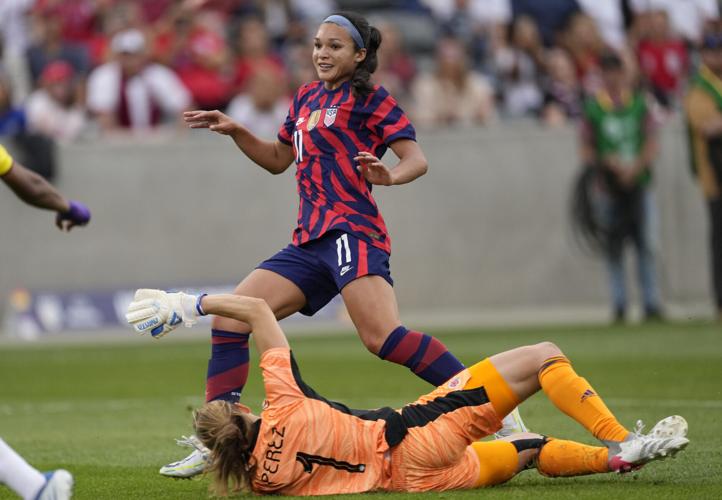 U.S. midfielder Taylor Kornieck, front center, is surrounded by teammates after scoring a goal against Colombia during the second half of an international friendly soccer match Saturday, June 25, 2022, in Commerce City, Colo. (AP Photo/David Zalubowski)

COMMERCE CITY – A SaberCat opened the scoring and a Buffalo completed it in the United States Women’s National Team’s 3-0 win over Colombia in a friendly Saturday at Dick’s Sporting Goods Park.

Sophia Smith, a Windsor native who attended Fossil Ridge High School, scored the first two goals, and Taylor Kornieck, a former star at the University of Colorado, capped her national-team debut with a goal in the 90th minute.

“Scoring, obviously, wasn’t a part of the plan,” Kornieck said. “But it’s a good perk.”

Rose Lavelle played Smith in behind the Colombia defense for the first two goals, while Kornieck’s header came off Megan Rapinoe’s service on a late set piece. The national team legend said it was a special moment for her as well as the rookie.

“Obviously having a target like that is ridiculous,” Rapinoe said. “It was kind of fun. I was like ‘No (expletive) way this is going to happen. First cap, this is perfect.’ Obviously my first game back in a while, so very special moment for her, special moment for me as well.”

At 6-foot-1 Kornieck is believed to be the tallest field player in national team history.

“They’re always looking for my head,” she said. “Obviously, I’m a really good target to play to.”

Lindsey Horan, of Golden, and Highlands Ranch native Mallory Pugh were also in the starting 11 for the United States.

Smith and Pugh nearly connected for the opening goal 12 minutes in. But Pugh failed to put her attempt on target.

After a series of missed scoring opportunities in the first half, Smith earned a penalty kick in the final minutes of the first half. Horan stepped up to the spot, but Colombia goalkeeper Catalina Perez made the save to keep the match scoreless to start the second half.

“We needed that first goal to kind of get going,” Smith said.

Kornieck entered the match in the 73rd minute to loud applause from the sellout crowd of 17,143. She said she didn’t hear any of it amid the chaos of her international debut. She still managed to impress coach Vlatko Andonovski, who said she was also performing well in training.

“We wanted to give her minutes to go through the stress and anxiety of a first cap, because we believe we will need her when we’re in the tournament,” Andonovski said. “What we saw from her is what we pretty much hope to see from Taylor – little touches to speed up the play and then dominate the box and aerial challenges.”

The match was the first of two friendlies against Colombia. The two teams meet again Tuesday in Sandy, Utah, though Saturday’s match will be hard to beat, at least for the goal scorers.

"I got to play at home for the national team in front of everyone I love," Smith said. "I've never done that before, and it might be a while until I get to do that again."

“I was so excited. I think the first thing I said was ‘I can’t feel my legs.' But it just means everything to me,” Kornieck said. “It has been my dream ever since I was a little girl.”