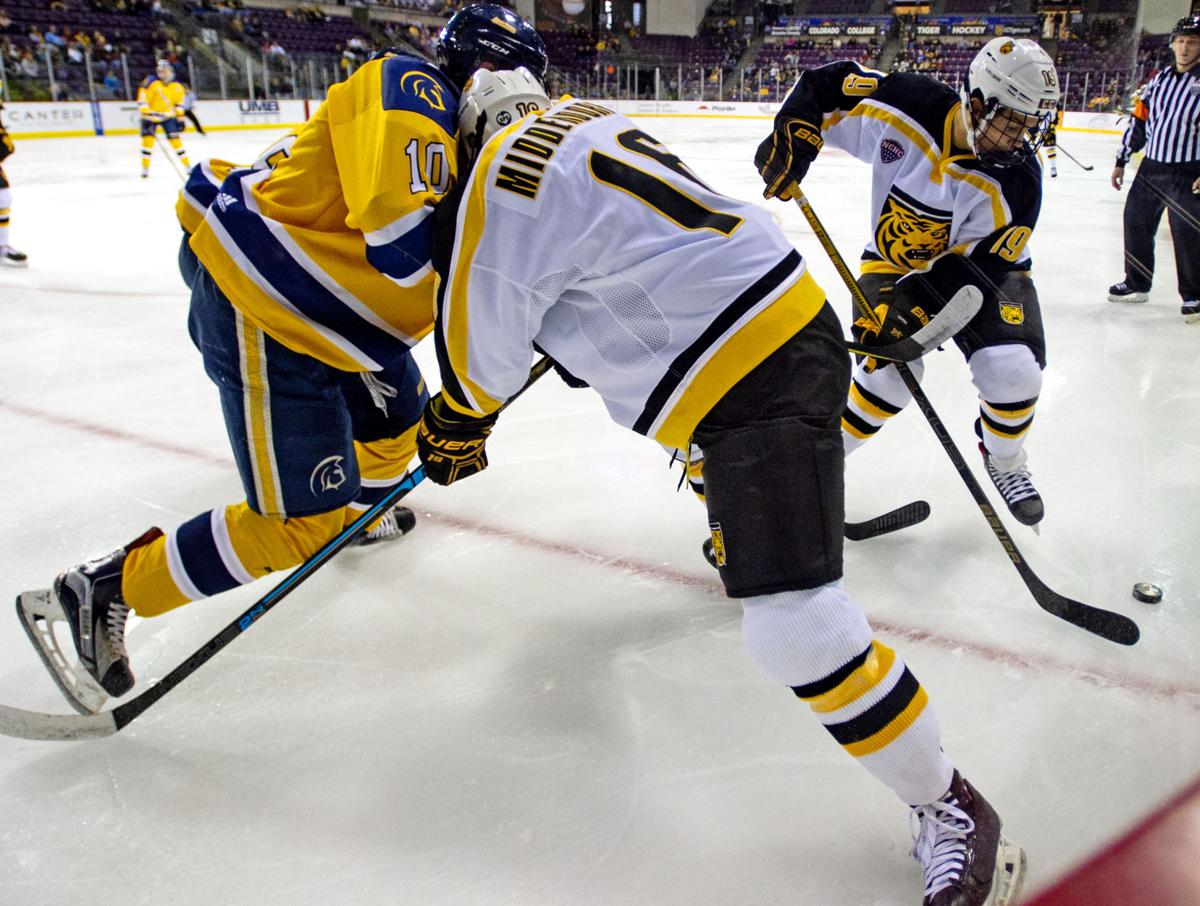 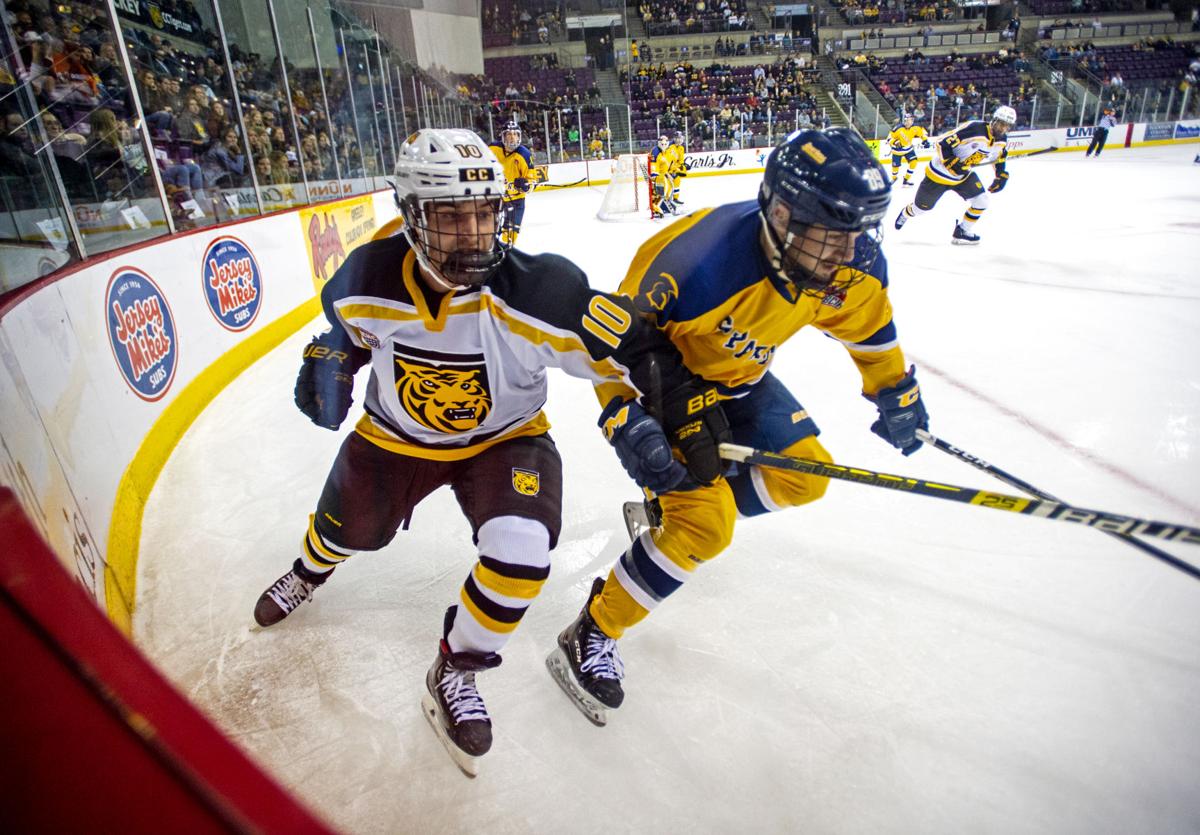 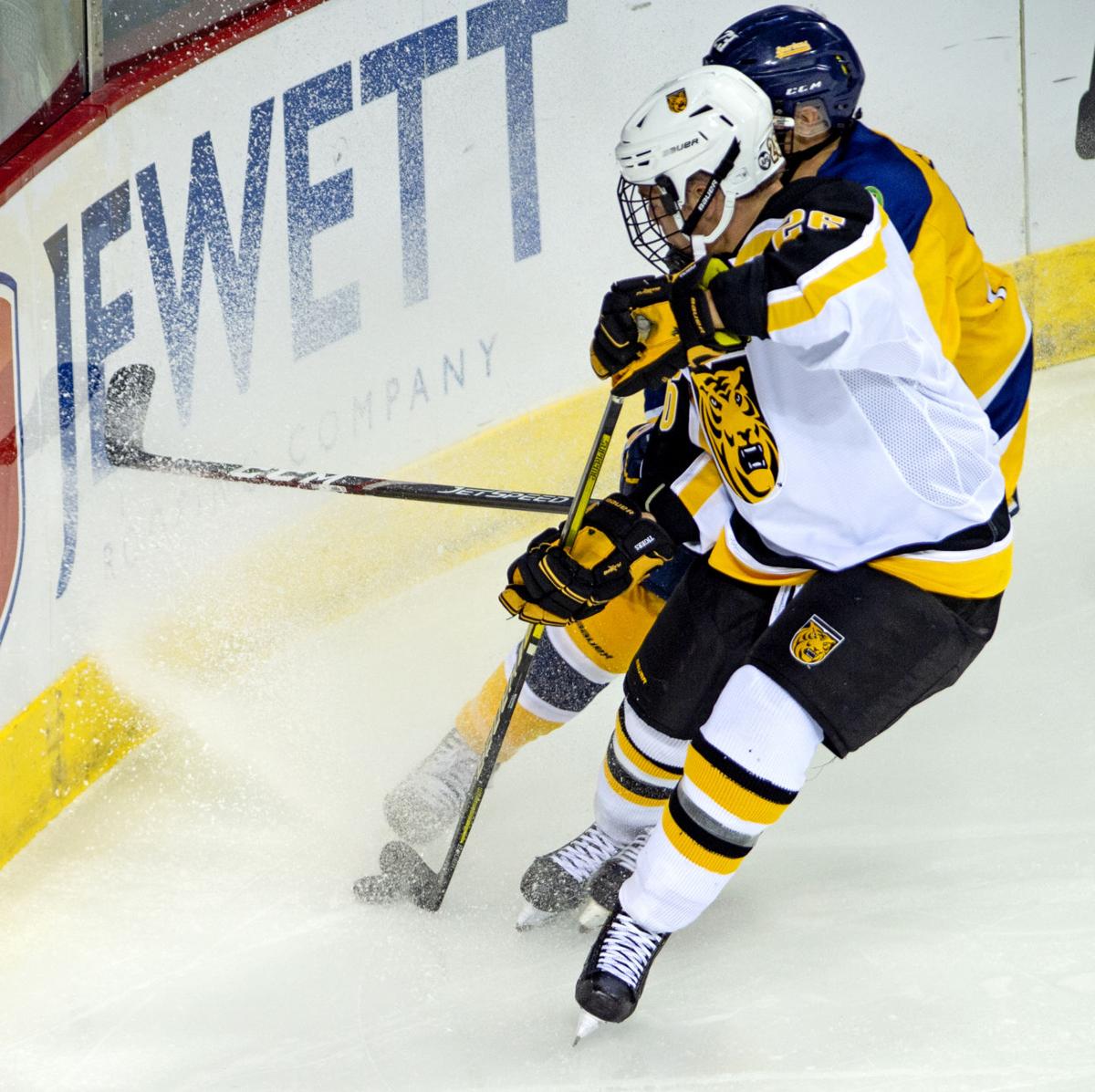 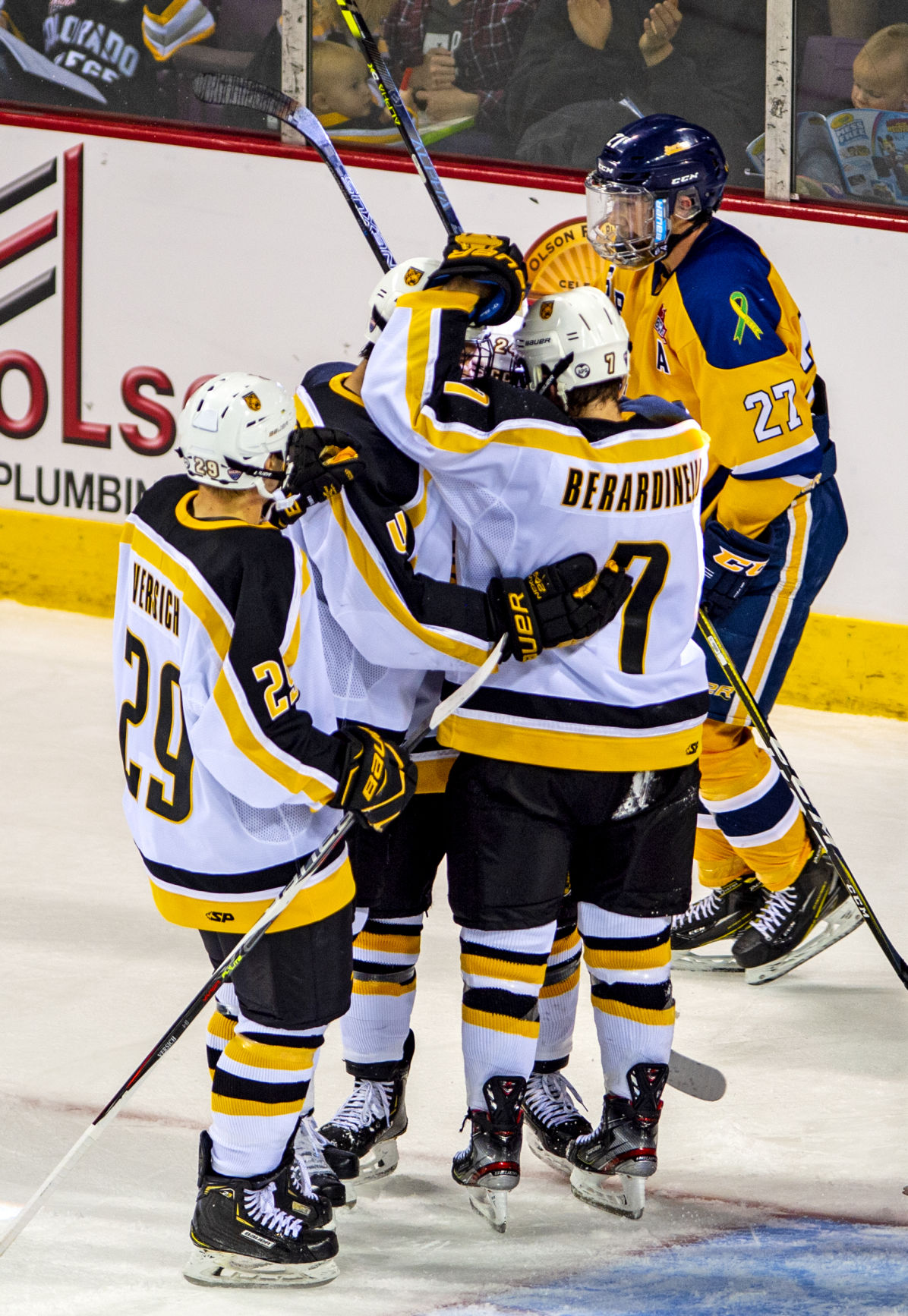 Colorado College's Christiano Versich (29), Alex Berardinelli (7), Jack Gates (24) and Bryan Yoon (4) celebrate after getting a goal during the second period of their game against the Trinity Western Spartans at the World Arena on Saturday. (Parker Seibold/The Gazette) 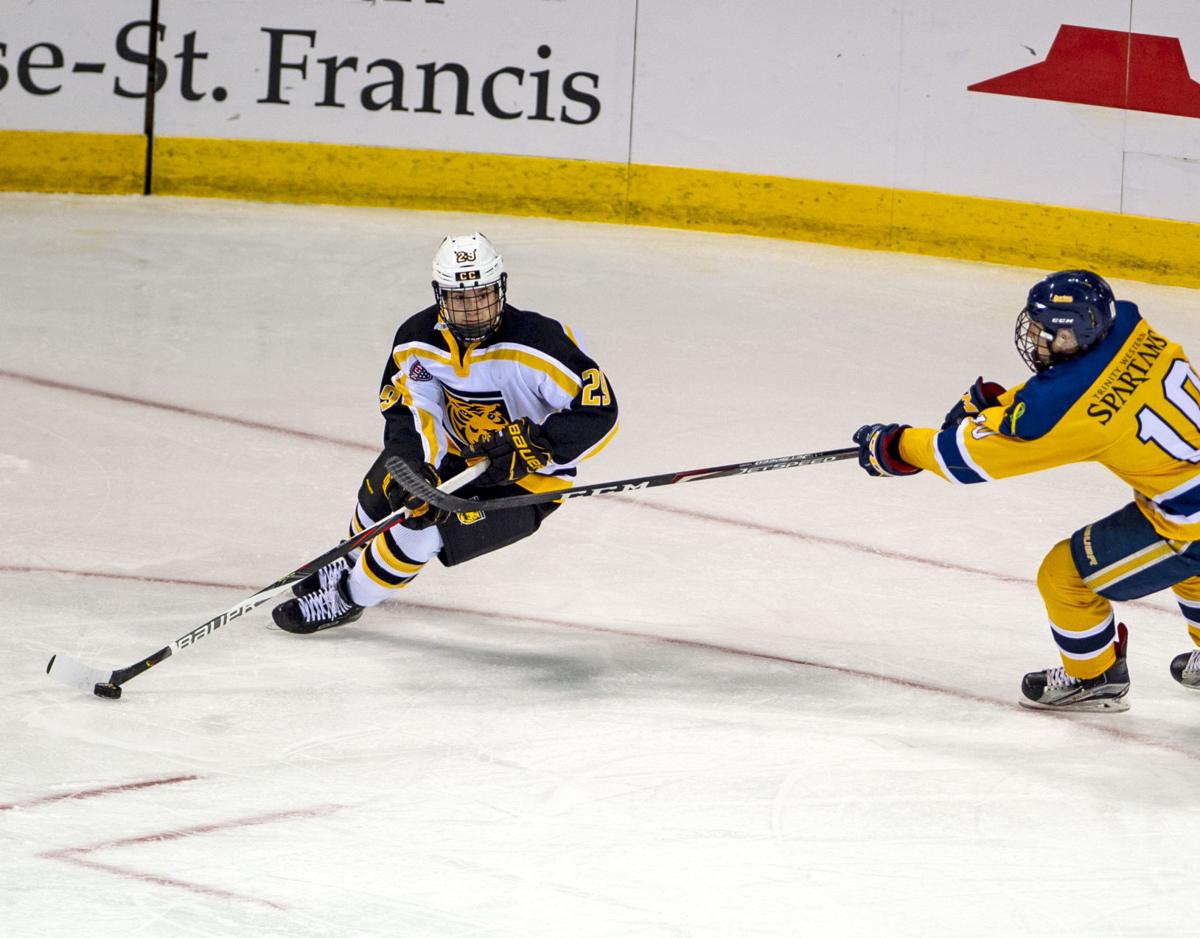 Colorado College's Christiano Versich (29), Alex Berardinelli (7), Jack Gates (24) and Bryan Yoon (4) celebrate after getting a goal during the second period of their game against the Trinity Western Spartans at the World Arena on Saturday. (Parker Seibold/The Gazette)

It wasn’t great hockey, but it wasn’t supposed to be.

Nearly all of Colorado College’s potential contributors showed what they had as the Tigers hit the ice for their first game action. Alex Berardinelli scored twice in a 4-1 exhibition win over Trinity Western on Saturday night at The Broadmoor World Arena.

The Tigers ran five lines and four and a half defensive pairings. That led to some awkwardness, but the faster, more skilled Tigers were good in transition and the defense didn’t give the Spartans much.

Everyone on CC’s roster made it into the game except senior Kristian Blumenschein, half of the Tigers’ most potent defensive pairing last season with Bryan Yoon and a trusted power play point man. Coach Mike Haviland said Blumenschein tweaked something in warm-ups, “there was no reason to play him” and he’s day-to-day.

There wasn’t much room on the bench.

“It was actually kind of nice,” forward Christiano Versich, who had two assists, reasoned. “Every time you got out there, you were fresh.”

“It was a weird game. I think the game definitely served a purpose.”

One purpose was to see as much as possible before the Tigers open the regular season next weekend against Minnesota.

“It’ll be tough to see the lineup come Friday because we’ve got some tough decisions,” Haviland said.

McKay Flanagan put forth his bid for play of the game with a booming open-ice hit with five seconds left in the second period, but it backfired. He drew a five-minute major for interference, which the Tigers killed off without incident in the third, matching the Spartans’ shot total 2-2.

Chris Wilkie broke open the scoring 9:03 into the game. Freshman Connor Mayer picked up his first of two assists.

“Everyone was kind of getting their jitters out,” Mayer said. “I think it’s pretty important.”

Versich sent it back for the trailer, co-captain Berardinelli, on the Tigers’ second goal. Berardinelli crashed the net for another score late in the second period.

The goaltending work was distributed evenly. Ryan Ruck handled the responsibilities in the first period while the Tigers were still getting their feet under them and made 10 saves. Matt Vernon relieved him for the second and weathered Trinity Western’s first power play with a few flashy saves among his eight.

Jon Flakne, the backup for the latter half of 2018-19, made six saves in the third period. That’s when the Spartans’ Evan Last scored their only goal five seconds into a power play.

“I thought they were all solid. They did their job,” he said. “We’ll see what happens on Monday.”

Bailey Conger and Erik Middendorf took off on a 2-on-1 as the minutes wore down. In his first game appearance with CC after sitting out a year due to transfer rules, Conger waited until the last moment to feed Middendorf, who buried it.

Freshman Josiah Slavin saw time with what appeared to be the Tigers’ top power play unit and was very visible among the hoard of roster hopefuls, but that wasn’t all.

Versich said it was Slavin’s idea that the two of them and rookie defenseman Chad Sasaki kneel at center ice for a postgame prayer after the game. Time will tell if it becomes a tradition.

On other side of transfer year, CC hockey's Bailey Conger back doing what he loves

An 8-0 exhibition win was hardly an indication of what’s to come as Air Force opens the regular season next weekend at No. 10 Notre Dame. But it certainly wasn’t a bad sign for the Falcons.