Colorado Avalanche defenseman Cale Makar is swarmed by teammates after scoring against the Nashville Predators during overtime in Game 2 of an NHL hockey Stanley Cup first-round playoff series Thursday, May 5, 2022, in Denver. The Avalanche won 2-1. 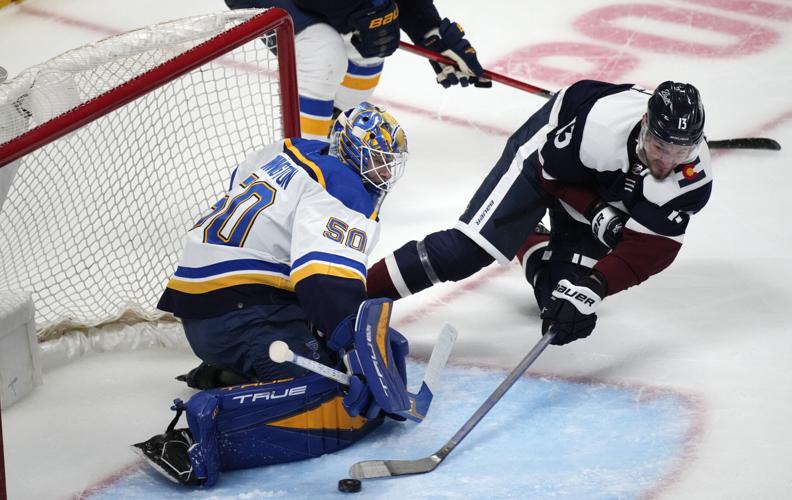 Avalanche right wing Valeri Nichushkin, right, tumbles to the ice while trying to wrap around the net to put a shot on St. Louis Blues goaltender Jordan Binnington in the first period April 26 in Denver.

Colorado Avalanche defenseman Cale Makar is swarmed by teammates after scoring against the Nashville Predators during overtime in Game 2 of an NHL hockey Stanley Cup first-round playoff series Thursday, May 5, 2022, in Denver. The Avalanche won 2-1.

Avalanche right wing Valeri Nichushkin, right, tumbles to the ice while trying to wrap around the net to put a shot on St. Louis Blues goaltender Jordan Binnington in the first period April 26 in Denver.

For one, the Avalanche coach would be the worst emoji ever. Dude doesn’t do emotion. His resting face hovers between did I turn off the iron? and who cares? I look great in wrinkles, anyway. Bednar once got into a heated spat with superstar Nathan MacKinnon on the bench, yet he maintained the look of a Zen dad with a pouty 3-year-old: You done yet? Let's move on.

So there’s something to be said for the caution relayed by the Avs coach leading into this series vs. the St. Louis Blues: “They’re extremely deep,” he said. Then he cautioned some more.

“Offensively, Nashville (Colorado’s first-round victim) had one line. These guys got three.”

Yeah, yeah. I get it. Coaches often throw up the caution flag without a crash. But I tend to agree with Bednar regarding a series that starts with Game 1 Monday or Tuesday at Ball Arena.

This series, right here, is the one. This is the series that answers if the Avs are still regular-season frontrunners ... or the all-time team the numbers suggest. Better bring it, because this series is going to be a serious test. The second round of the playoffs has been the Avs’ bugaboo, and this St. Louis squad is playing better hockey than the 2019 Sharks, 2020 Stars and 2021 Knights who ended Colorado's seasons.

“I think we are more ready this year,” forward Mikko Rantanen said.

Well, as often philosophized by Gary Kubiak, who helped another local sports club exorcise its demons, "We're fixin' to find out."

The Blues are good, not great, and the same could be said about the last three teams that clipped the Avs in the second round. None won the Stanley Cup. Two lost before the final.

Suggesting the Avs are in for a test won’t be a popular opinion, and it sounds a little goofy after the Avalanche treated the Predators like orange pylons. Shoot, five Stanley Cup playoffs series needed Game 7s this weekend. Two other series went six games. Then you had the Avs, who needed seven ... days ... to sweep the Predators. Light work. Now they’re heavy favorites again.

The Blues closed the season 14-2-2, while the Avs won two of their three matchups. There will be St. Louis fans at Ball Arena, because why the heck would you live there if here is an option?

Now that we’ve made the Blues into the '80s Oilers or '90s Red Wings, here’s the truth: If the Avs do Avs things, the Blues don’t stand a chance. All due respect, nobody does. That’s why the Avs' focus during a week off was on the Avs and not which team they would be playing.

“Trying to make the pace as fast as we can and make the other team keep up with us,” as defenseman Josh Manson said.

Gabriel Landeskog took in his daughter’s final soccer practice of the season. Manson caught every moment of the Oilers-Kings series, where his father is a coach with the Oilers. Bednar advertised a gorgeous John Deere lawn mower from 4Rivers Equipment up in Greeley. Jealous.

And that’s what finally escaping the second round would be, therapy, if not a straight-up exorcism. Believe it or not, it’s been 20 years since the Avs reached the Western Conference final — with six second-round exits in between.

“I think a lot of the time you have to look at the teams that are hoisting it had to go through some things before they get there,” Landeskog said during an interview on Altitude 92.5 FM.

Make mine the Avalanche in seven, and don’t expect many peaceful bedtimes along the way.