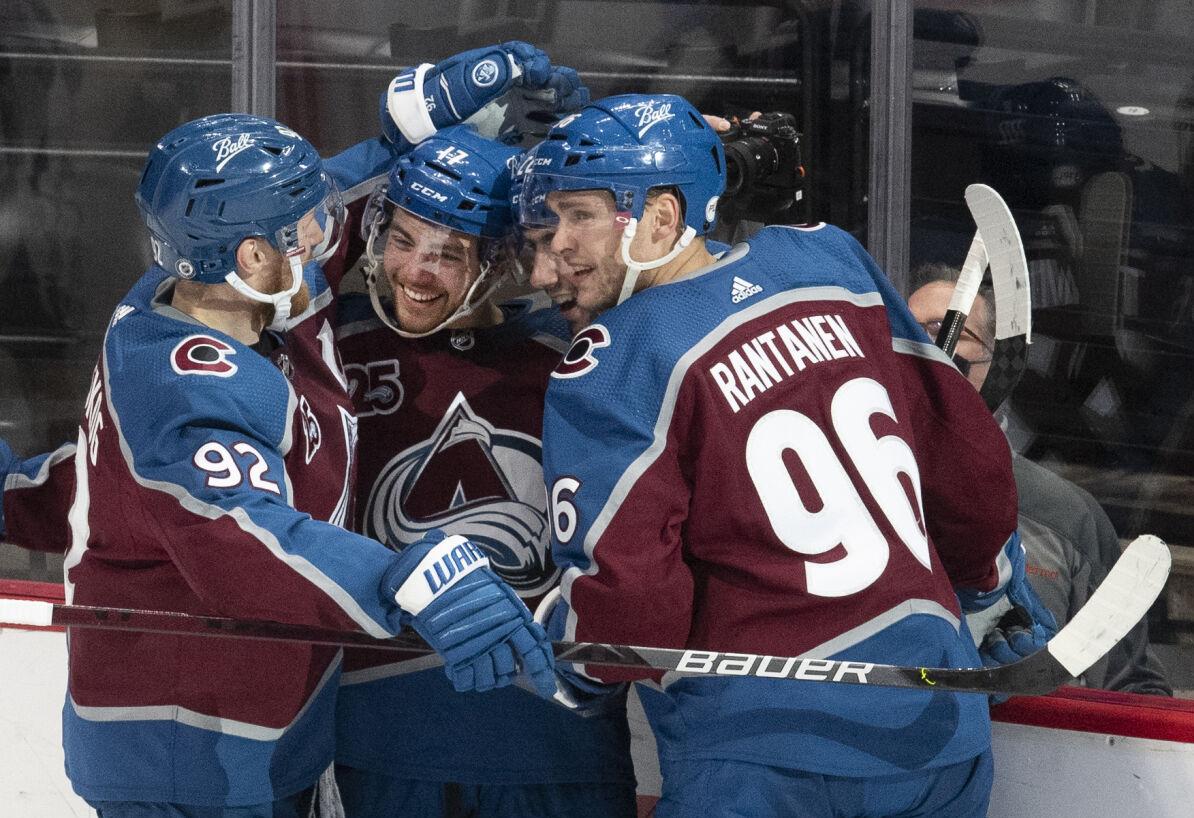 Colorado Avalanche center Tyson Jost (17) celebrates with his teammates after scoring his first of two goals against the Los Angeles Kings during the second period Thursday, May 13, 2021, at Ball Arena in Denver. The Avalanche scored five goals in the period to take a 5-1 lead. (The Gazette, Christian Murdock) 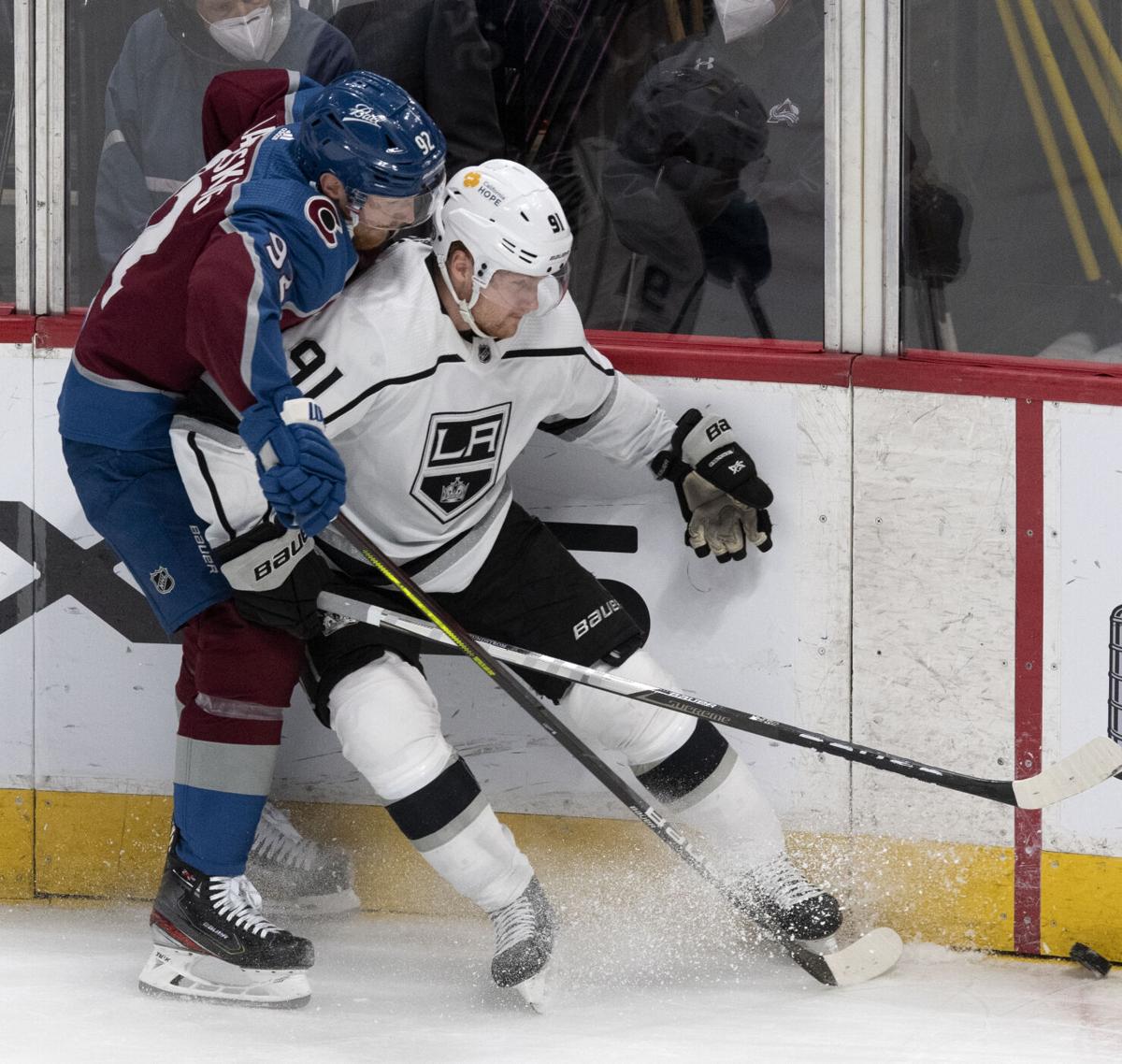 Colorado Avalanche center Tyson Jost (17) celebrates with his teammates after scoring his first of two goals against the Los Angeles Kings during the second period Thursday, May 13, 2021, at Ball Arena in Denver. The Avalanche scored five goals in the period to take a 5-1 lead. (The Gazette, Christian Murdock)

DENVER — It took until Game 56, but the Colorado Avalanche proved they were as good as advertised.

At least during the regular season.

The Avalanche beat the Los Angeles Kings 5-1 on Thursday and clinched the Presidents’ Trophy, winning a tiebreaker with the Vegas Golden Knights. They also seized the top seed of the West Division and a first-round series with the St. Louis Blues, which begins Monday in Denver.

“It’s been some good series against those guys,” forward Tyson Jost said of the Blues. “We’re excited.

“It’s going to be a good matchup and we know what to expect. That’s a veteran team out there.”

The Avalanche will enjoy home-ice advantage throughout the postseason, a goal they set before play began.

“Two years ago, we lost Game 7 in San Jose. Our year-end exit meetings, everyone talked about how nice it would have been to have home ice,” coach Jared Bednar said.

At 9:46 of the second period Thursday, Jost wristed the puck past L.A. goaltender Troy Grosenick. That shook something loose for the Avalanche, who scored four more unanswered before the end of the period and sailed to the victory.

Most of the first period was spent in Los Angeles’ end and Grosenick turned aside 13 shots. The Joonas Donskoi-Nazem Kadri-Andre Burakovsky line combined for five shots, but was on the ice for a goal with 45 seconds left before the horn. Burakovsky was tangled up with Sean Walker and lost an edge at the blue line. Walker tore past him on a breakaway and beat Jonas Johansson low.

“We didn’t put our heads down,” points and goals leader Mikko Rantanen said. “We knew we were the better team in the first period. It took a while to get the first goal, but after that we found a way."

The Kings didn’t register a shot until nearly seven minutes into the second period. Soon after that, the Avalanche revved up.

Jost’s second goal was off a perfectly threaded pass from Conor Timmins, which Jost tapped in. Pierre-Edouard Bellemare went in after a rebound with a stick in his midsection and gave Colorado the lead less than three minutes later.

Donskoi, who had come close several times in the first period, batted a Kadri rebound out of midair for his career-high 17th of the season. Burakovsky took a pass from Devon Toews and scored for his 12th point in eight games.

Brendan Lemieux threw Samuel Girard – who returned from an injury Wednesday – to his rear and fellow defenseman Ryan Graves went right after Lemieux. A tussle with lots of tugging and spinning but little actual fighting ensued.

Johansson, who went in goal in place of Wednesday’s winner Philipp Grubauer, made 21 saves.

“We checked the one box,” Rantanen said. “Everybody knows what the next box is.”

The Presidents’ Trophy has been awarded 34 times, but only eight of the winners have gone on to win the Stanley Cup, most recently the Chicago Blackhawks in 2013. Colorado has now won it three times, including the 2000-01 season when they went all the way. In an abbreviated season, the 2020-21 Avalanche topped the points percentage record of .720 set 20 years previously, finishing with .732.

This was the Avalanche’s 10th division title since moving to Denver.

Mikko Rantanen assisted on Wednesday’s first two goals, giving him not just the regular-season team lead in goals (30) but points (66). He passed Nathan MacKinnon, who missed four of the last five games with what coach Jared Bednar said are separate injuries.

With an assist Thursday, Cale Makar reached 44 points (8 goals, 36 assists) in 44 games, the only defenseman in the league (that has appeared in more than one game) so far to average a point per game. He also finished plus-17.

The Avalanche had seen the L.A. net from all angles but failed to put the puck into it almost halfway through the game. Tyson Jost scored from the hashmarks and the Avalanche were off.

Colorado hosts the St. Louis Blues in the first round of the playoffs.

If the Colorado Avalanche crafted a vision board during their brief preseason, the Presidents’ Trophy would have been on it. Nowhere near as p…