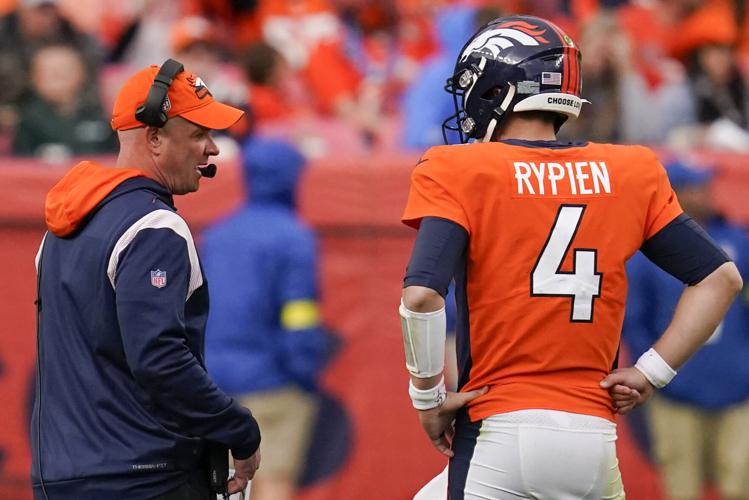 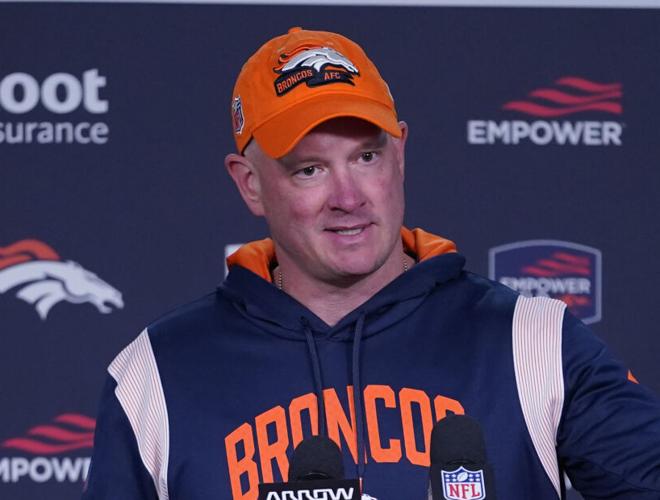 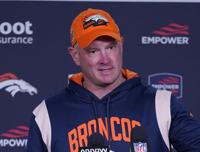 Being the head coach of the Broncos’ offense is a fireable offense.

If Nathaniel Hackett worked for Walmart, he wouldn’t even have a job as a store greeter Monday.

The corporation’s former CEO, Rob Walton, and its current board chairman, Greg Penner, would dismiss him on the spot if they had hired Hackett. If any of us had paid a record $4.65 billion for the Broncos this year, we wouldn’t put up with this skit.

But the Walton Family & Friends are new to the football world, still are enjoying their owners’ suite, the shrimp and the champagne, and they aren’t about to make a brave, bold and brazen move with Hackett – even though he’s the third straight former assistant coach who isn’t qualified to be a head coach. Instead, he is another example of The Peter Principle.

The most immediate and appropriate move Monday for Hackett and his Broncos is to get out of the country. They belong in a London fog.

The Broncos are in-com-plete, and the coach is in-com-pe-tent.

The Broncos were reduced at the end of Sunday’s game to throwing up literally and figuratively Hail Mary passes as they continue to have the worst offense in the league and possibly the worst offense in franchise history. They have scored 16 or fewer points in six of seven games and 9 points in two of the past three

The Broncos’ loss to the Jets can’t be blamed on Pat Shurmur, who is long gone. Russell Wilson can’t be held accountable for this one. The Broncos’ defense certainly can’t be criticized, condemned or censured for allowing just one stinking touchdown again. And Brett Rypien isn’t at fault. The backup quarterback did the best he could, which is not good enough.

The muck stops here with the coach.

I plead guilty to piling on, but the crowd @ Mile High stadium absolutely agrees. The 70,000 who did come never seemed enthusiastic except when the players from the 1997 first Broncos NFL Super Bowl championship were introduced at halftime for the 25th anniversary celebration.

There never will be dancing in the streets of downtown Denver or even a hint of a parade for the 2022 Broncos. The head coach will be added to the Broncos’ Hall of Ashamed with Josh McDaniels, Vance Joseph, Vic Fangio and Whatstheirnames from the 1960s.

The most preeminent quarterbacks at the stadium Sunday were John Elway and Peyton Manning.

If those two had played with Coach SpongeNate SquarePants, his own self offensive coordinator, scheme contriver and play caller, they might have scored only eight touchdowns in seven games, too. Yet, they wouldn’t have played for him.

The Broncos are last alone in the AFC West at 2-5 and haven’t even gotten to the most difficult section of the schedule when they play division leaders Baltimore, Tennessee, Kansas City and the Rams, who may be in first by Christmas.

This could be the saddest of the six-season streak of senselessness.

And the Jets were just as awful as the Colts, and both prevailed with a combined total of one touchdown.

The Broncos were in position at midfield to tie or win – stop me if you’ve heard this one before – with 48 seconds remaining and the score at 16-9.

But Rypien, in his only start since the Jets in 2020, was ordered, we assume, to throw the long ball to KJ Hamler on second down at the Jets’ 49. Then, on third down, he threw 16 yards to Courtland Sutton, but the ball was deflected and intercepted. Alas, the official review reversed the turnover, as the pick touched the turf, and ruled incomplete pass. On fourth down Rypien flung to Hamler in the end zone, and the ball was knocked down.

Obviously, Hackett had nothing on his play sheet creative enough to drive to a touchdown. What else is new?

Doesn’t the coach have a Walmart Special?

Playing without starting quarterback Russell Wilson, who has a hamstring injury, the Broncos again put together another offensive disaster Sunday — this time with Brett Rypien as the starter.