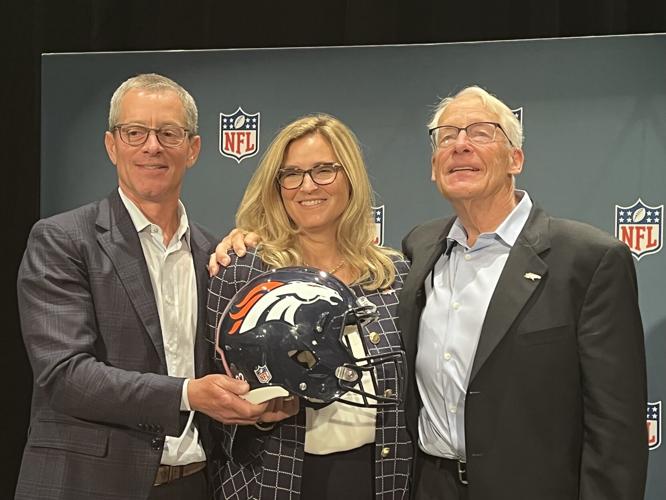 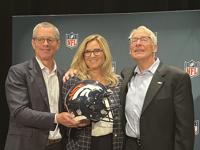 (from left) Greg Penner, Carrie Walton-Penner, Rob Walton and NFL commissioner Roger Goodell pose for photos after the Walton-Penner Group was approved by the NFL as the new owners of the Denver Broncos. 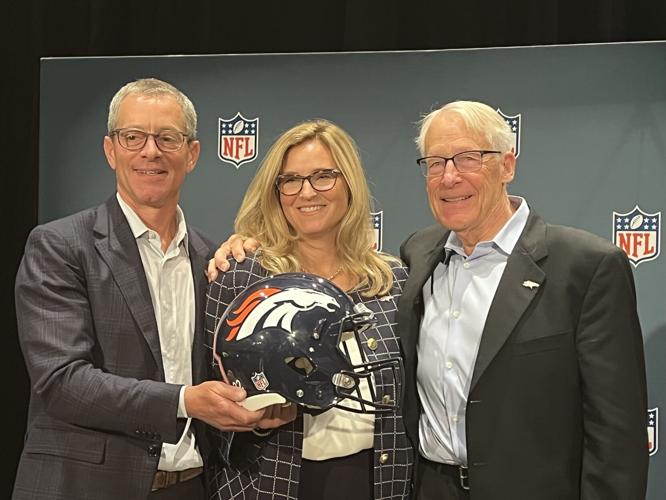 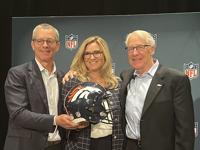 Greg Penner (left), Carrie Walton-Penner (center) and Rob Walton (right) pose for a picture at the J.W. Marriott in Minneapolis. The Walton-Penner group was approved unanimously by NFL owners as the franchise's new ownership group.

(from left) Greg Penner, Carrie Walton-Penner, Rob Walton and NFL commissioner Roger Goodell pose for photos after the Walton-Penner Group was approved by the NFL as the new owners of the Denver Broncos.

Greg Penner (left), Carrie Walton-Penner (center) and Rob Walton (right) pose for a picture at the J.W. Marriott in Minneapolis. The Walton-Penner group was approved unanimously by NFL owners as the franchise's new ownership group.

BLOOMINGTON, Minn. — It's officially a new era for the Denver Broncos.

After 38 years of leadership under the Bowlen family, the Broncos have new ownership. The Walton-Penner Ownership Group led by Walmart heir Rob Walton, along with his son-in-law Greg Penner and daughter Carrie Walton-Penner, were officially approved as the franchise's new majority stakeholders Tuesday at the J.W. Marriott in Bloomington, Minnesota.

NFL commissioner Roger Goodell said the Walton-Penner group received a unanimous vote among the 31 other league owners, marking a monumental moment in American professional sports history, with the team being sold for a U.S. record $4.65 billion. The last NFL team sold, the Carolina Panthers in 2018, sold for $2.2 billion.

"We are so excited to officially become the owners of the Broncos," Walton said in a 10-minute press conference after the special owners meeting. "It's a big, big day for us."

The official purchase marks the end of what has been a busy past year for the Broncos, who now have a new quarterback in Russell Wilson, head coach in Nathaniel Hackett and owners in the Walton-Penner group. And on Tuesday, the new leaders of the franchise made it clear their motives won't be any different than that of the previous regime led by late owner Pat Bowlen, who oversaw all three of the franchise's Super Bowl victories.

"Putting a winning team on the field is our No. 1 priority," Walton said. "We couldn't be happier with both the coach and our general manager. As we looked at this from the early days, we thought we might get here without a coach and without a quarterback... Joe Ellis and the trustees and George (Paton) came up with an outstanding coach, I think, in Nathaniel. We think we have the pieces to really fit together and have a great season."

Broncos owners through the years

Listed by season since team’s inaugural AFL season in 1960.

Walton said purchasing the Broncos was something they had discussed doing 10 years ago, knowing the team might be up for sale in the future. And when the opportunity presented itself in January, the family jumped at the opportunity. And they weren't alone, as several other billionaires made a run at the team, including Josh Harris, who owns the Philadelphia 76ers and New Jersey Devils.

"The Broncos are the one sports franchise we considered buying," said Walton, who has never owned a professional sports team. "(When) they actually announced the team was for sale earlier this year, we got in the middle of it, first thing. We have connections — Greg and Carrie live in Colorado, I've been going to Colorado a long, long time. Great connections for us. It's a terrific team."

The sale of the team came after late owner Pat Bowlen died in June 2019 and after his children were unable to come to an agreement on which of Bowlen's seven children would be the next in line to own the team. It was once thought Brittany Bowlen, the fifth-youngest child of Bowlen, was set to be her father's successor. But after several lawsuits between the siblings, Ellis and the trustees decided it was best for the team to be sold.

Since Bowlen's death, Ellis, along with Bowlen's trustees, served as the franchise's standing owner while the family decided whether or not to sell the team. Ellis announced Tuesday he will be stepping down as the team's president and CEO and will now serve in an advisory role.

"As I step down as president and CEO, it has been the honor and privilege of a lifetime to be part of the Denver Broncos for 27 seasons," Ellis said in a statement. "I am forever thankful to our dedicated staff, the players and coaches for making this franchise what it has become today — one of the best organizations in all of sports."

When Bowlen's health started to deteriorate in 2013 due to his battle with Alzheimer's, the team began to struggle. Since winning Super Bowl 50 in February 2016, the Broncos haven't appeared in the playoffs and have five consecutive losing seasons.

The Walton-Penner group hopes to change that and follow in Bowlen's footsteps, as he turned the Broncos into one of the NFL's most successful franchises. During the Bowlen era, which officially began in 1984 when he bought the team from Edgar Kaiser for $78 million, the Broncos had 21 winning seasons, 13 division titles, nine conference championship berths, seven Super Bowl appearances and three Super Bowls titles.

"We are committed to making sure the Denver Broncos are the best team to play for, work for and cheer for," Walton-Penner said. "Pat Bowlen created an incredible legacy in the Broncos and he leaves big shoes to fill. We look forward to continuing to build on that legacy, as we continue to work with the community as well as within the organization to continue to strengthen what he created. We'll be doing that as we have changes that we're making."

One change the Walton-Penner group has already started to make is putting together an impressive list of team shareholders. Chairwoman of Starbucks Mellody Hobson, former U.S. Secretary of State Condoleezza Rice and Formula One champion Sir Lewis Hamilton have already joined the group.

These additions to the group come after the league strongly encouraged the new owners be diverse, as the league has few minority owners. The NFL and the Broncos' trustees wanted diversity to be a priority.

It's unclear what other changes the Walton-Penner group intends to make, but facilities will likely be high on the list. It's been speculated that a new stadium may be built, as Empower Field at Mile High is now 21 years old.

But on Tuesday, the new owners weren't ready to make a commitment to a new home for the Broncos just yet.

"Premature to start talking about a new stadium," Penner said. "I'll say that Empower Field at Mile High is a world-class facility. We've got a good partnership with the metropolitan football stadium district and fortunately have almost 10 years left on our lease. So we'll evaluate all of our options and really dig in and understand the situation before we make a decision."

For the Walton-Penner group there's still plenty of questions to be answered going forward. They only took five questions during Tuesday's press conference in Minneapolis, but are expected to meet again with the local media Wednesday in Denver, along with Hobson and Rice who will be in town.

But they did answer the most important question, even if it was the easiest to answer. They didn't spend the most money in American professional sports to lose. They're coming to Denver in hopes of re-instilling a winning culture within the Broncos organization.

"The Broncos are an iconic franchise that means a lot to Colorado and the whole Rocky Mountain region," Penner said. "We know our fans' expectations are high and we embrace that. We're really anxious to get started.

"We want to compete and we want to win."

CENTENNIAL • The Broncos were back in action Monday after a day off from training camp, and it was a practice that might have featured the bes…