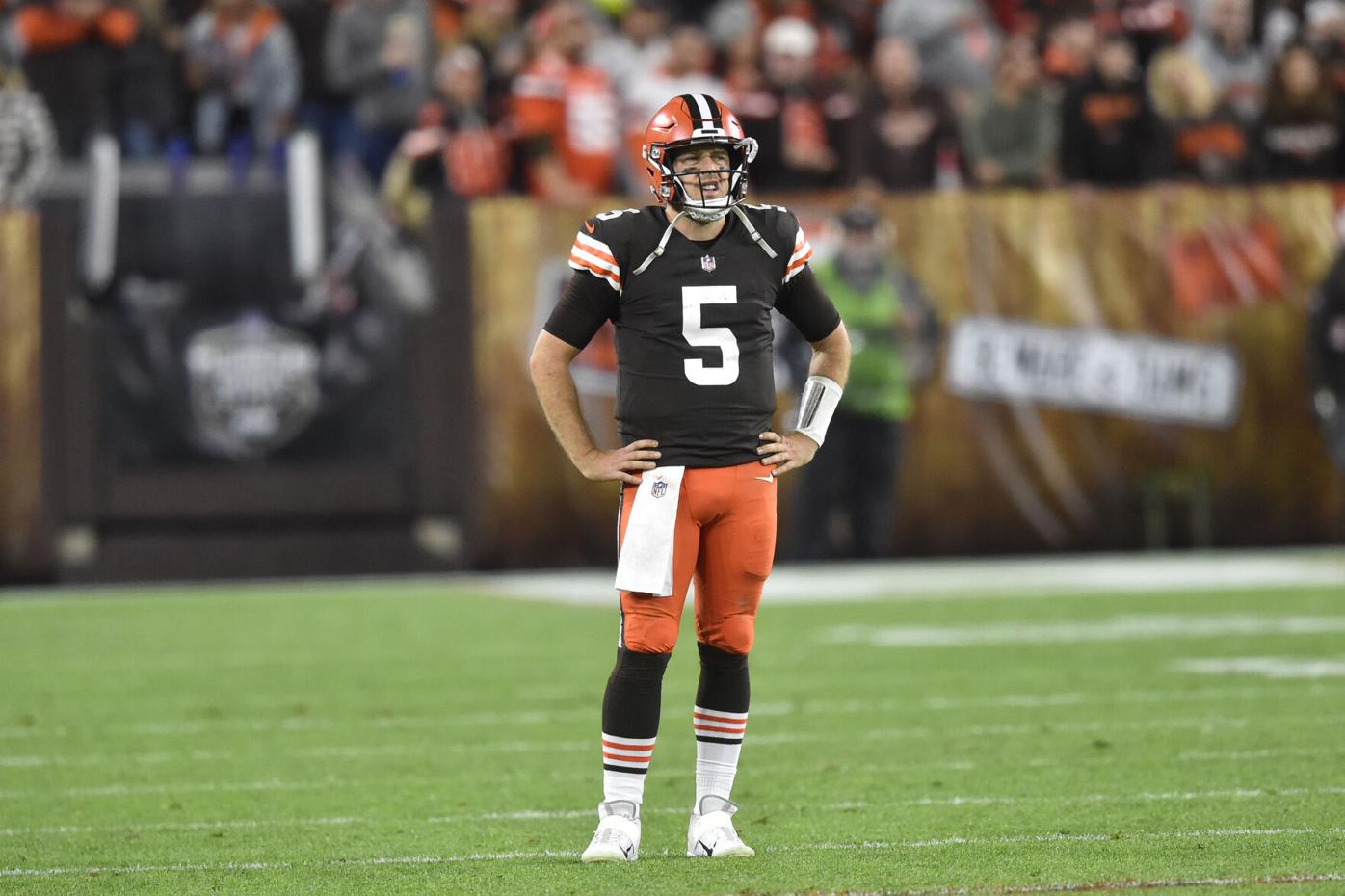 Cleveland Browns quarterback Case Keenum (5) watches a video review during the second half of an NFL football game against the Denver Broncos on Thursday in Cleveland. 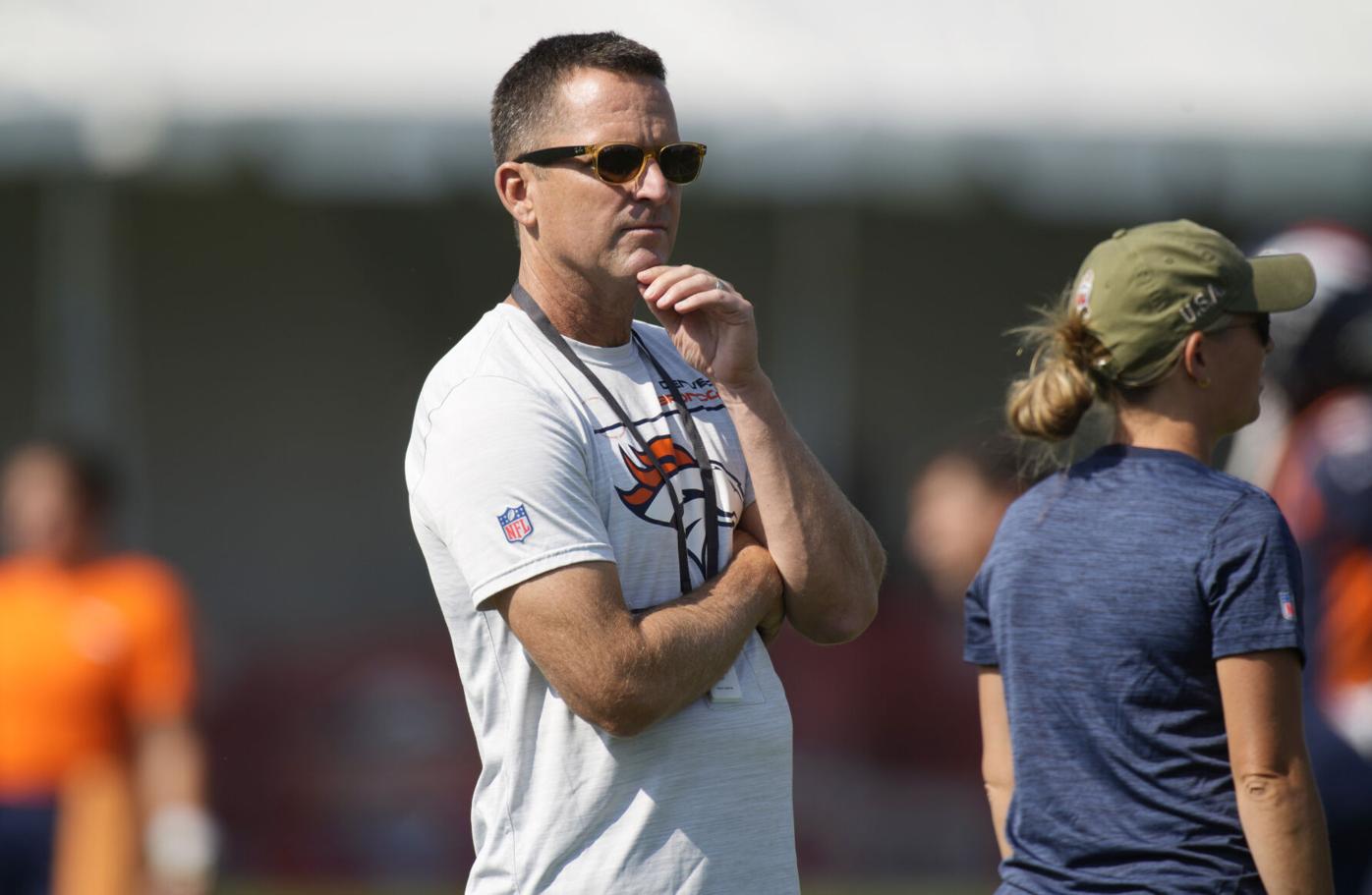 Cleveland Browns quarterback Case Keenum (5) watches a video review during the second half of an NFL football game against the Denver Broncos on Thursday in Cleveland.

This Broncos project is going to be a long road back to relevancy. Better get a move on.

If Paton is the general manager the Broncos need him to be, the new guy will speed this up and make the toughest decision first. Fire Vic Fangio. Promote Mike Munchak to head coach.

That won’t fix everything that's plaguing the Broncos, but there used to be standards around these hills, and it’s past time to bring 'em back.

After the Cleveland Browns deployed Case Keenum at quarterback — yep, same Case Keenum — to beat the Broncos 17-14 Thursday night inside FirstEnergy Stadium, it’s time we all learned who’s in charge around here.

I mean that literally. Who’s in charge around here?

Because this is a mess. The Broncos’ house looks like a 3-year-old discovered spray paint. In back-to-back weeks, the Broncos got blown out by the Raiders, who were without their coach, and got beat by the Browns, who were without their quarterback. The Raiders and Browns — the Raiders and Browns! — don’t need very important contributors to beat the Broncos. They just need to plug in the special teams coach or Case Keenum and show up.

“We didn’t play well enough to win the game,” Fangio said after.

Failing as a head coach isn’t a referendum on a man’s coaching ability. Ask Wade Phillips, who once told me he was “a lousy head coach” a couple days before he won Super Bowl 50 as the defensive coordinator here. You might have noticed by now I don’t believe Fangio is the biggest problem with the Broncos. When the same ol’, same ol’ happens over and over under different systems and coaches, the pattern suggests the personnel is a common thread.

What’s wrong is folks are too comfortable.

Do you remember when GM John Elway stepped forward after a 2014 playoff loss to the Colts to say he wanted to make things uncomfortable around Dove Valley? That worked out well.

Now you’ve got Case Keenum running — not passing, running — through a Broncos defense designed by Fangio and paid for with big bucks. The Browns led 10-0 before the Broncos even had a first down, but the play that sealed the revenge game was Keenum scrambling for a first down, breaking two tackles in the process.

If you had Case Keenum as the opposing player who would put the Broncos' season on life support, buy a ticket to Las Vegas right now. But that’s how bad it is for the Broncos, who are 3-4 after an 0-3 start and have 10 days until the next game, enough time make changes and, at least, try to salvage the season. Can’t lose to the Raiders one week, Case Keenum the next.

Can’t do it. Or at least you couldn't do it for the 30 years when Pat Bowlen was around, when standards were around. Who's in charge now?

“It’s not a coaching thing. It’s not a personnel thing. We’ve got everything we possibly need to win games,” said Von Miller, who does not have a full sack over the Broncos’ past four games.

I suspect Paton is playing the long game and won’t move on from Fangio with 10 games still on the schedule. Fair enough. Can’t blame him for spending two decades in the NFL before landing a GM job and wanting to see through the first year before making a dramatic change.

But boy would making changes to the coaching staff send a message that just OK isn’t OK. The most consistent franchises align the Big 3 — owner, coach, quarterback — and work down from there. The Broncos have no permanent owner, no permanent coach, no permanent quarterback. They are 0-for-3 in the prerequisites for success. They’re not close.

The Browns were missing their top two running backs — Nick Chubb and Kareem Hunt, a couple of studs — and still had 182 rushing yards. Once the Browns built a 10-0 lead, the Broncos had no chance. Nothing comes easy for Denver’s offense, again. Yet the Broncos still opted for an injured Teddy Bridgewater over Drew Lock, and that tells you exactly how they feel about Lock.

“The way we look at it is it’s a marathon, and each week is its own race,” said Bridgewater, whose offense totaled 223 total yards, its lowest total.

There is hope with Paton, but it's in the unknown.

If Paton took Teddy and Von on one-year deals to help make room for Aaron Rodgers in Year 2, he’s going to look like a genius. Cool beans. Hope that happens. But the new GM passing on Justin Fields and Mac Jones signaled this season was more of a tryout for George Paton.

Either way, the most important figure in rebuilding the Broncos in still a wild card. He hasn’t even been here for a year.

But it would be smart to move fast on important decisions. Time to get a move on. Year 2 with the Broncos the fingers start pointing at the GM.

Woody Paige | D'Ernest downs Denver: The Browns running back was dominant in a 17-14 victory

Earnest and D’Ernest will live on forever in the folklore of the Browns and the Broncos.