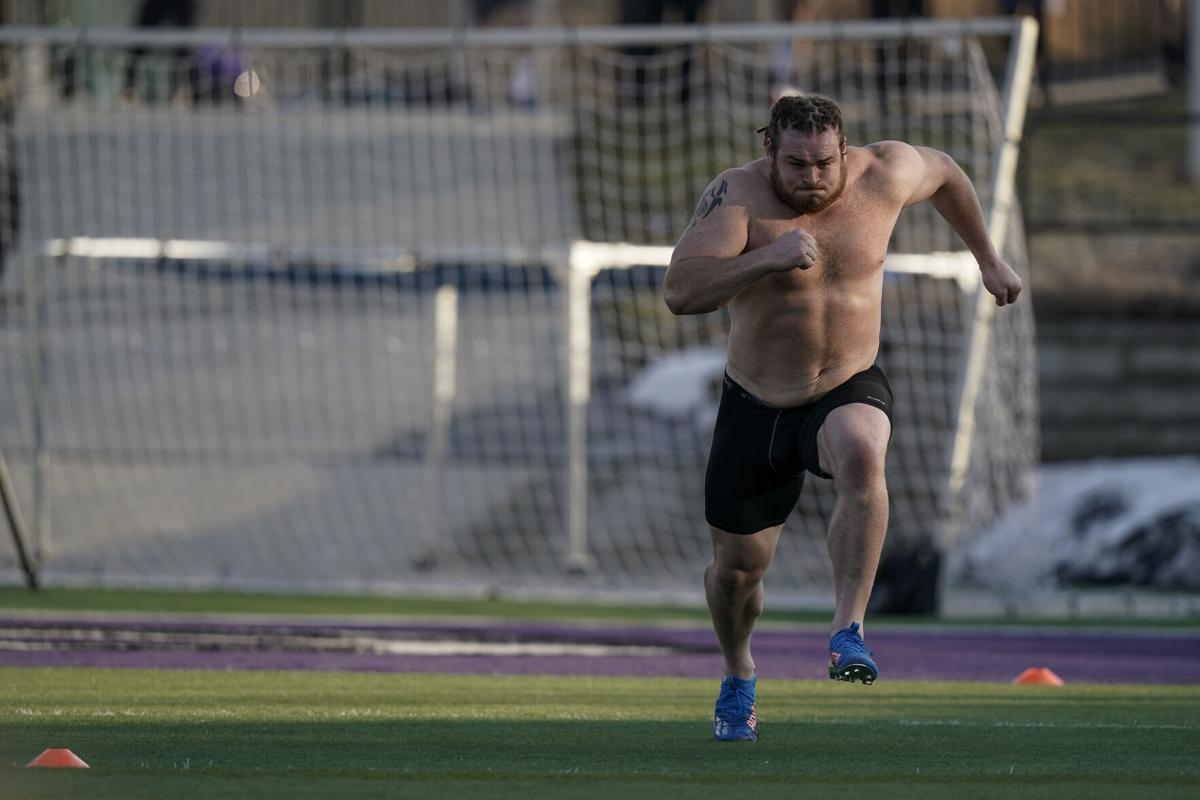 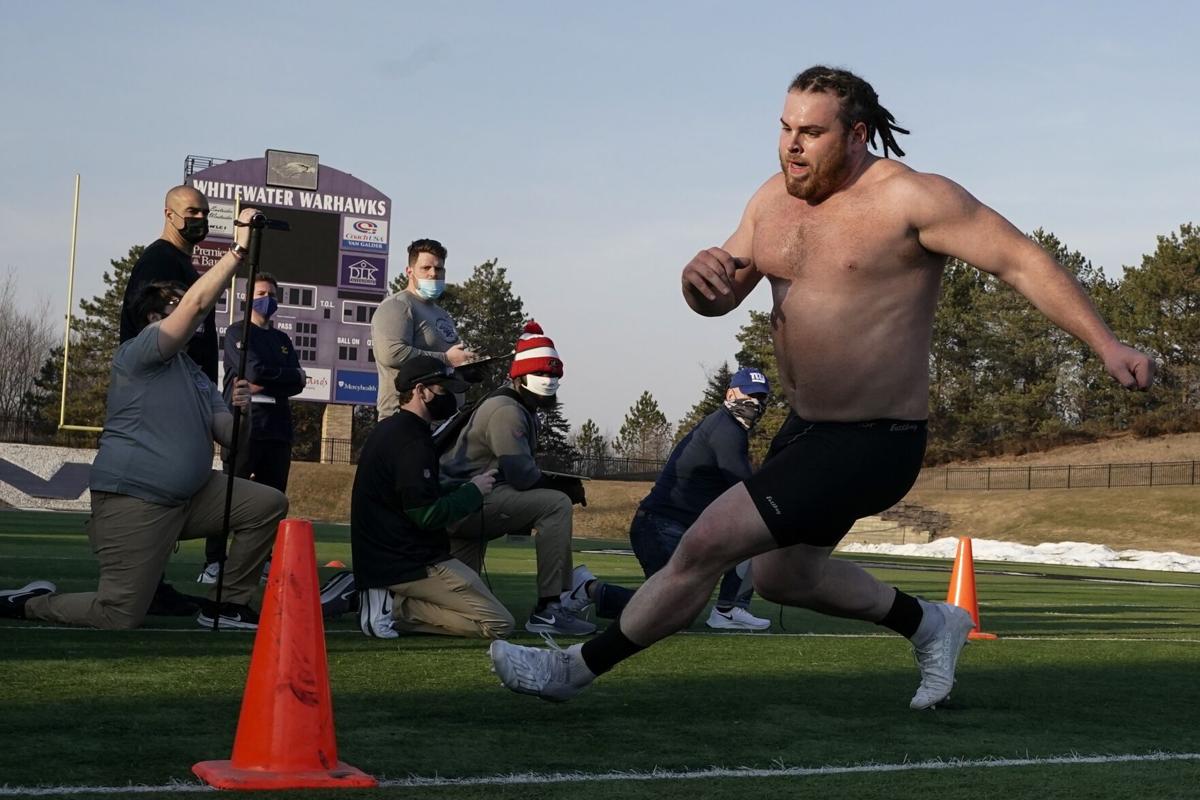 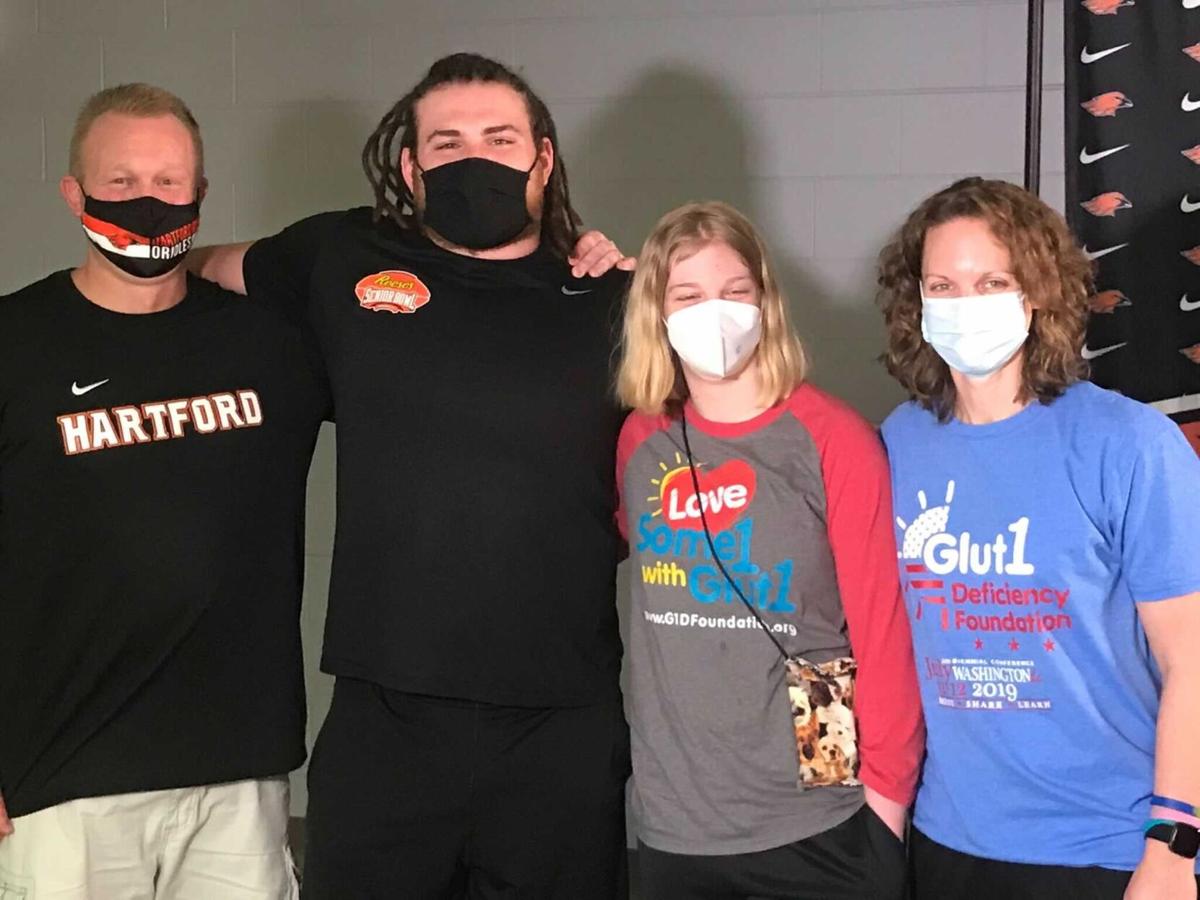 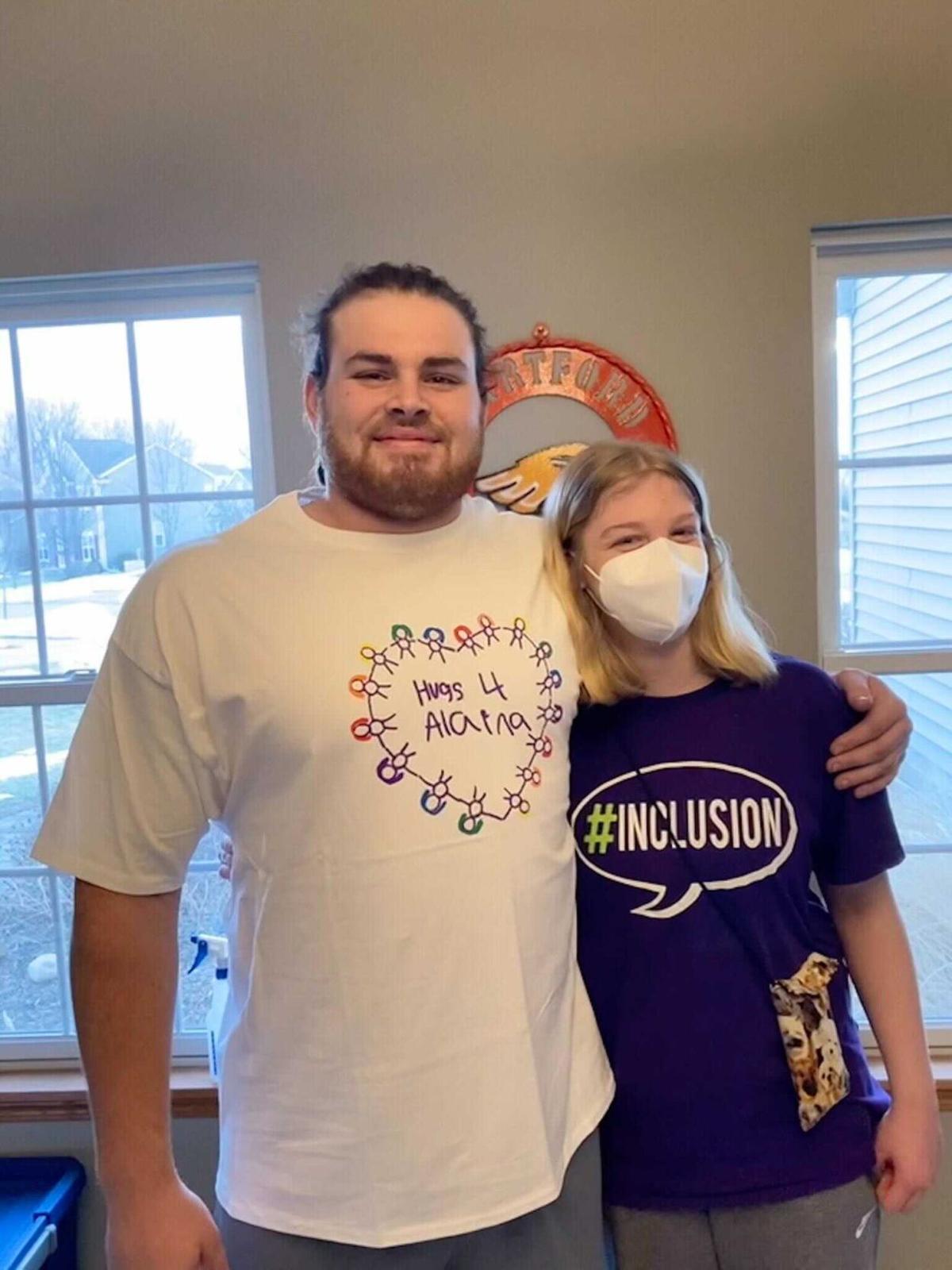 You’ve probably seen the viral picture of his gut at the Senior Bowl. You’ve likely watched his workout videos on a remote island in Canada. And you’ve might have read the national feature stories written by ESPN, The Washington Post and The Athletic, detailing his journey from Division III football to the NFL.

People can’t get enough of Broncos rookie offensive lineman, Quinn “The Gut” Meinerz. The third-round pick from Hartford,Wisconsin, is soon-to-be a fan favorite in Denver, as he became the feel-good story of the draft — a small-town kid whose personality is as big as his stomach.

But to really know Meinerz, one must understand the small town he came from and the lives he's touched, starting with Alaina Shelsta.

Alaina, 14, suffers from GLUT1 deficiency syndrome, a rare metabolic disorder that prevents spinal fluid from carrying glucose to the brain properly. It often causes seizures and only around 300 people worldwide are diagnosed with it. She’s the daughter of Meinerz’s high school offensive line coach, Paul Shelsta.

Meinerz has been one of her closest friends and biggest supporters since she was diagnosed at 9. He watched as Paul and his wife, Christine, struggled with the mental toll of taking care of her and all that came with it. Now, he hopes to give back.

“It’s been extremely tough on our family,” Paul said. “But Quinn — he’s been a shining light for her. And just like my daughter, it means everything for the town of Hartford. It means absolutely everything to be represented so well on a national stage.”

For the Shelstas and all of Hartford, Meinerz represents more than just a mauling offensive lineman who became famous for his belly and insane workouts that led him to the NFL. To them, he’s a reflection of their town.

Located in a rural part of Wisconsin about an hour northwest of Milwaukee, Hartford has a population of just under 15,000 and is mostly known as the home of the Wisconsin Automotive Museum. While football is king at Hartford Union High School and plenty of good players have gone on to play college ball, Meinerz is only the third Hartford native to have been drafted, joining John Shinners (1969) and Art Hauser (1958).

But while they take pride in his play, it’s not his football skills the citizens of Hartford gravitate toward. It’s his outgoing personality and the bonds he’s forged with people like Alaina that will leave a lasting legacy.

“Hartford’s been a great place to me,” Meinerz told The Gazette. “To have the community of Hartford say I’m a representation of the city, it’s just unbelievable.”

So while Meinerz may be living in Denver soon, his contagious and charismatic persona is coming with him — a persona manufactured in Hartford.

“On the field, he’s the meanest, toughest guy out there. And then off the field, he’s an unbelievably good person,” Paul said. “Right now, he’s leading our community. And soon, he’ll be leading players in the NFL. I think the Denver Broncos, they got a gem. They’re going to have a guy who’s going to fit right in.”

Despite having few family members who played football, including his dad, the sport has always been a part of Meinerz’s life.

And that part of his life has been well told over the past several months.

He attended Wisconsin-Whitewater, a premier Division III program an hour south of Hartford, after receiving little offers elsewhere. At Whitewater, Meinerz saw the field some his freshman year before becoming a starter at guard his sophomore year. He was then first discovered by, ironically, Broncos scout Scott DiStefano, who was at Whitewater’s practice to watch Nate Trewyn, an NFL prospect at the time.

“Come back in two years,” Bullis told DiStefano. “He’ll be even better.”

From there, he went viral for his summer workouts at his great uncle’s resort on an island in Canada, where he lifted logs and gas tanks. Which eventually put him on the Senior Bowl’s radar after his senior season was canceled due to COVID-19. And it was there, in Mobile, Alabama, that he made a name for himself in the NFL draft process.

Having never played center before, he spent the months leading up to the Senior Bowl practicing in his backyard, snapping against a tree. His hard work paid off as he went from a borderline draft pick to a second- or third-round choice.

“I think he raised up everyone’s draft board because there were a lot of unknowns about him,” Broncos GM George Paton said. “When you see him in one-on-one drills blocking guys that are first-and second-round picks, it was pretty amazing. You don’t see that very often. The more you dig into the person, the player, Whitewater, and where he came from, I think that he rose on everyone’s draft boards.”

But before the workouts at his great uncle’s resort or his spectacular Senior Bowl performance, Meinerz was like any other kid in Hartford. He spent most of his days as a teenager fishing in the town's ponds and eating at the local Culver’s, where he’d always order a double mushroom and swiss burger, with cheese curds instead of fries, a side of ranch and a chocolate concrete mixer with cookie dough bites. He’ll be happy to know there’s 18 Culver’s in Colorado.

“Everyone liked Quinn,” said Ryan Zuern, who played running back at Hartford Union. “There’s not a person in Hartford who would say a bad thing about him."

He wasn’t always the biggest, either. As a freshman in high school, he weighed 180 pounds and was 5-foot-8. He spent the summer before his sophomore year working out in his dad’s basement, also known as the “Grit Dungeon.” He grew 6 inches and gained 80 pounds that summer, which earned him “The Gut” nickname. The “Grit Dungeon” is also where he worked out during the beginning of the pandemic.

“He's built like a rock and his stomach sticks out like a stone,” said Aaron Rusch, who coached Meinerz at Hartford Union. “He’s an animal.”

Meinerz quickly grew into one of the best offensive linemen in school history, starting at right tackle as a sophomore.

“From the start, you could see how much he loved the weight room,” said John Redders, Meinerz’s high school head coach. “From the moment he stepped in Hartford Union High School, he said ‘I’m going to whatever it takes to be the best I can be.’”

He helped Hartford Union to the playoffs each year and was a key part in Zuern, his best friend, breaking the school record with 340 yards rushing in a game. They essentially ran two plays the whole game: Base 25 and 26. Basically, run behind Meinerz.

“He was just throwing dudes around all night,” Zuern said. “He was unstoppable.”

All those hours spent in his dad’s basement had paid off. He had become one of the best offensive linemen in the state.

While his hard work didn’t generate him many offers, he still carried that same work ethic to Whitewater, which would turn him into the national phenomenon he’s become.

“Most of my motivation comes from within myself,” Meinerz said. “Part of that is a line my dad always said, ‘If you’re going to do something, why not be the best at it?’ That’s always my answer when people ask me that. I’m always trying to be the best at whatever I’m doing."

He wanted to represent Alaina in some way. He had just gone viral a few days prior for the picture of his stomach and knew he had a chance to do something special. He asked Paul if he could put "Hugs4Alaina" — her foundation — on his Senior Bowl helmet.

“I just started crying. That meant so much,” Paul said. “The fact that this is his time, he’s making a name for himself. He’s putting himself in a position to get drafted and he’s thinking about my situation. That shows the type of person he is.”

Three months later, when he was drafted by the Broncos, he again promoted Hugs4Alaina with his “Belly of the Beast” shirts that donates directly to her foundation, hoping Broncos Country would join the cause.

“It really shows his character,” Redders said. “For a guy who has a chance to bust into the national scene and for him to put this girl, who’s a freshman in high school, at the top of my list — it’s really neat. Not everyone would do that. It’s neat to have a celebrity now that’s going to take it that much further and not to just make him look good, but I think he really cares about the family.”

Meinerz isn’t going to stop there, either. He said plans to have Hugs4Alaina be his My Cause My Cleats next year, while also continuing to support the foundation financially.

Like his motivation to be a great football player, Meinerz said it’s hard to explain where that type of attitude comes from. Of course, some is from his parents and coaches throughout his life. But a large part of it is just who he is. It’s not complicated, he said.

“It’s just about treating others the way you want to be treated,” Meinerz said. “Really just try to just treat everybody the same and be a good person and do things the right way. Just do things right and everything else will fall into place.”

Meinerz credits Hartford for helping him become the man he is.

The motivation to make it to the NFL was sparked by the fact few have done so in Hartford. And the affection he's shown to others was a product of those he grew up alongside.

And soon, Denver will get to see just how special the kid from Hartford is.

“Denver is going to love him,” Paul said. “He’s just a normal guy trying to make the world a better place who’s going to play football while doing it.”

Paul Klee: Pick a Bronco, any Bronco: Who goes on Denver's billboard, if they had to sell tickets?

The 2021 Broncos are a scout’s dream and nobody’s nightmare, Paul Klee writes. Who goes on the Broncos billboard if they were to erect one?