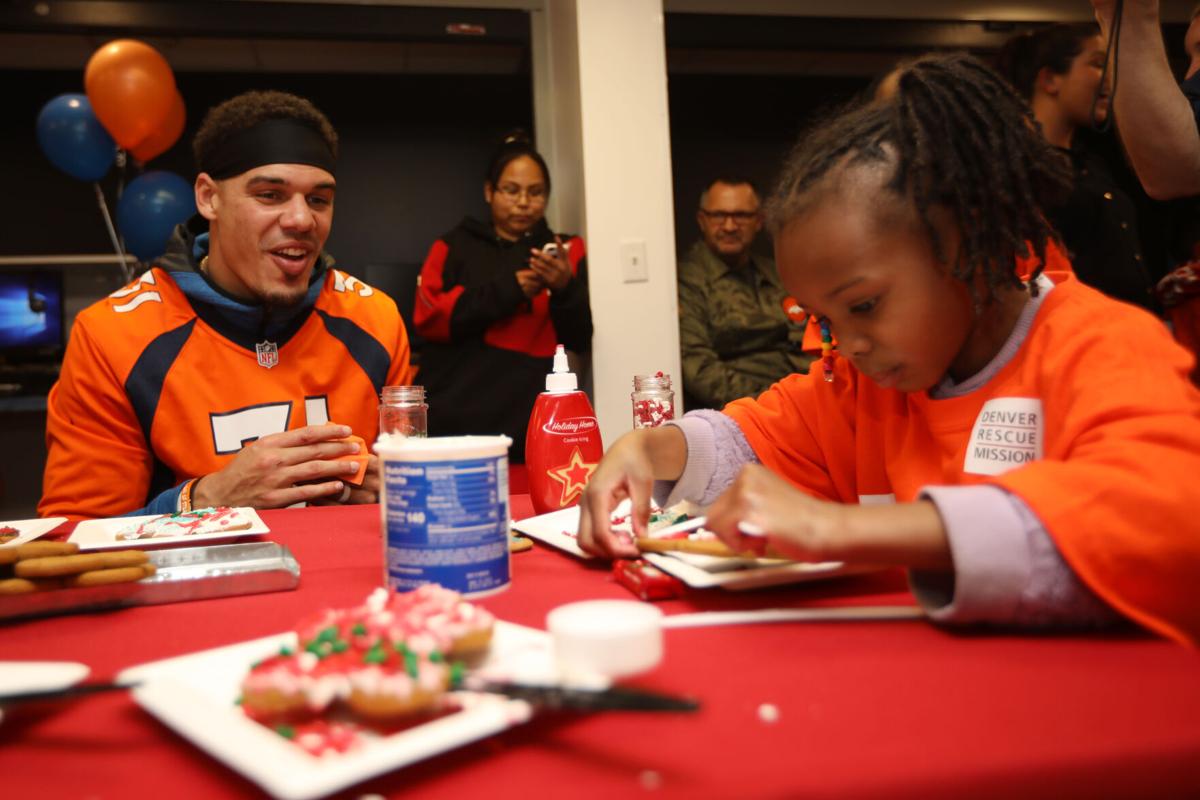 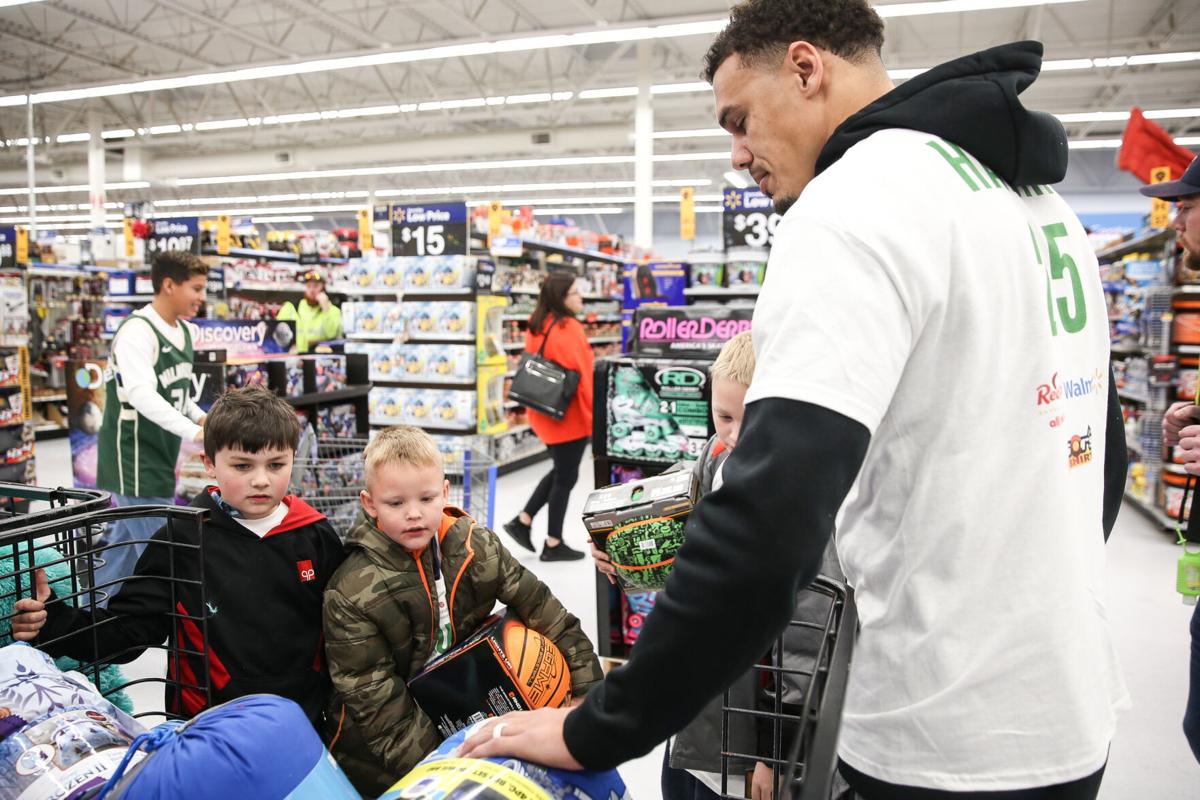 Justin Simmons helps out as Chris Harris Jr. hosts children from the Denver Children's Home and the Salvation Army for shopping spree as part of the Chris Harris Jr. Foundation's annual Shop with a Jock event on Dec. 10, 2019. (Photo by Jeremy Rincon) 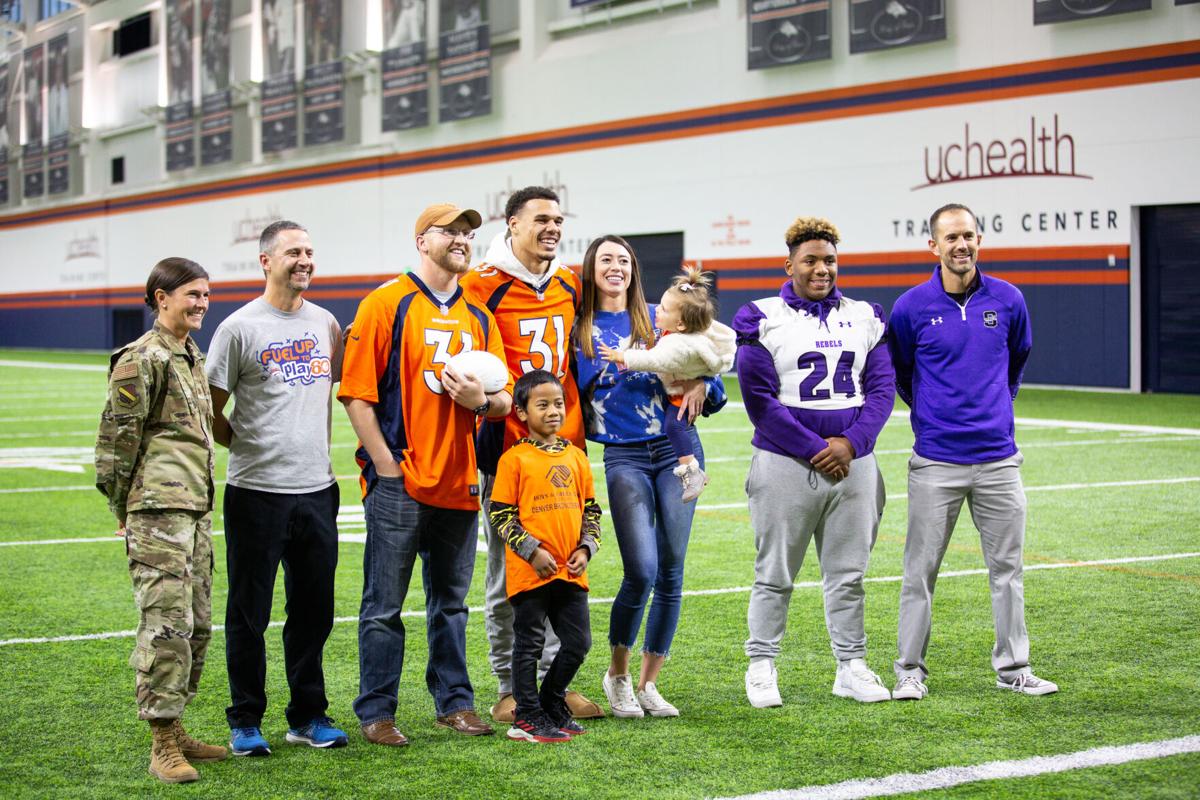 A group photo of Justin Simmons, his wife, Taryn, their daughter, Laney, and others as part of a surprise presentation of the Denver Broncos' 2019 Walter Payton NFL Man of the Year nomination on November 21, 2019. Several members of the community whom Simmons has impacted surprised him with the nomination after sharing why he had such a great impact on them. (Photo by Jeremy Rincon)

Justin Simmons helps out as Chris Harris Jr. hosts children from the Denver Children's Home and the Salvation Army for shopping spree as part of the Chris Harris Jr. Foundation's annual Shop with a Jock event on Dec. 10, 2019. (Photo by Jeremy Rincon)

A group photo of Justin Simmons, his wife, Taryn, their daughter, Laney, and others as part of a surprise presentation of the Denver Broncos' 2019 Walter Payton NFL Man of the Year nomination on November 21, 2019. Several members of the community whom Simmons has impacted surprised him with the nomination after sharing why he had such a great impact on them. (Photo by Jeremy Rincon)

Sure, coach Vic Fangio and Simmons’ fellow Broncos were thrilled for their friend and teammate. But when Simmons signed his four-year, $61 million deal, making him the highest-paid safety in NFL history, he didn’t just make a long-term commitment to the Broncos.

He made a commitment to the city of Denver.

“It's hard to find a really good football player, but it's really hard to find someone that's out in the community like Justin,” Paton said at Simmons’ press conference Monday. “His work in the community is a big part of who he is, whether that's through his foundation or his weekly visits to our Boys & Girls Club. It's something we're incredibly proud of, and as an organization, it's something we embrace.”

From spending countless hours at the Boys & Girls Club of Metro Denver, to being a leading voice in social justice initiatives, to helping pay people’s bills during the pandemic, Simmons’ impact in Denver has been immense.

And for Tschetter, Miller, Barrows and Fitch, who have seen Simmons’ work off the field up close within their respective organizations — the Denver Rescue Mission, RISE, the Broncos Boys & Girls Club of Denver and the Justin Simmons Foundation — they couldn’t be more grateful to have someone like him as a leader in the community for at least four more years.

“I think it’s vital that you have someone who is visible on TV and plays for the city’s favorite team to be present and present consistently,” said Fitch, the executive director of Simmons’ foundation. “For Denver, they received a gem. Denver has someone who can really pull their community together, regardless of where you stand politically, where you stand on racial lines — Justin is the glue that can bring that all together.

"What blessing for Denver and the Broncos franchise to have a guy like that in uniform.”

During a meeting with a few kids at the Boys & Girls Club this past year, Simmons overheard one of the older kids say they had just gotten a new job at Dickey’s Barbecue Pit. Simmons told the 15-year-old he’d visit them during their first week on the job.

When they were at work the next day, in walked Simmons for lunch.

“That sounds like little stuff,” said Barrows, the director of the Broncos Boys and Girls Club of Denver. “But it’s so important to show these kids that you are exceptional and you are special and I care about you. I think him doing that is a lesson for everybody, really.”

Simmons has made it an emphasis to focus on kids and young adults in his charitable work, spending thousands of hours at the Boys & Girls Club, where he's made it a priority to never miss an event.

That’s why one of his biggest contributions to the Boys & Girls Club has been with RISE — a partner with the club and the Broncos, as a national nonprofit whose goal is to educate and empower the sports community to “eliminate racial discrimination, champion social justice and improve race relations.”

One of the most vocal Broncos players during the nation-wide social justice protests that took place throughout the 2020 summer, Simmons dedicated eight weeks of his time — in the middle of the season — to be a part of the RISE initiative in Denver. Starting in October and ending in November, Simmons spoke with local kids weekly about diversity and inclusion in their communities.

“He’s simply down to earth and because of that, he immediately clicked with the students in the program,” said Miller, the VP of programs at RISE. “And it’s not a situation where an athlete is coming in and doing a Q&A and a speech. This is a scenario where Justin is doing the activities right alongside the young people.”

RISE partners with dozens of professional sports teams and universities, with hundreds of athletes and coaches leading the way as some of their most prominent voices. Simmons is one of the most active participants.

“He’s definitely one of the standouts and, frankly, when we talk about the program, he’s an example we give frequently,” Miller said. “I would put him in that top category and it’s because of working alongside those students, it’s about being vulnerable and sharing the personal experiences, and his willingness to share what he’s still learning, what he’s working on. Justin was not shy in sharing his perspective and that’s really important for these young people to see."

Simmons hasn’t only spent his time with RISE and the Boys & Girls Club, either.

He most recently donated several thousand dollars to the Denver Rescue Mission to help those in need during the pandemic, by helping pay everyday expenses, such as utility bills, for multiple Denver families. He’s also been a frequent speaker at their STAR Transitional program, which is designed to help kids who are transitioning out of homelessness.

It's things like this and speaking with kids weekly, that sometimes goes unnoticed, but is what makes Simmons a leader Denver needs.

“To have Justin Simmons, who is one of the top players, to step up time and time again especially in the time of COVID-19, is just really remarkable,” said Tschetter, public relations manager at the Denver Rescue Mission. “He doesn’t do it for the social media or the press, he does it because he genuinely cares about changing people’s lives and helping them. You don’t find that type of person every day.”

Simmons and his wife, Taryn, first met with Fitch in his South Florida home in February 2020.

He wanted to start his own foundation, listing everything from social justice, to voting rights, to disadvantaged kids, to feeding families as the main areas he wanted the foundation to focus on.

It was only a month later that Simmons was franchise tagged by the team, meaning his time in Denver may be nearing its end. But that didn't change Simmons' mindset on his foundation and what he wanted to accomplish in the community.

“Denver was always at the forefront mainly because of how the Bronco community had really embraced him," Fitch said. "There were so many organizations that he was volunteering his time with before the big contract while he was just on the franchise tag. It was never ‘I’m not under the big contract yet, let’s not focus on Denver.’ It was always ‘I’m playing in Denver, I want to do some things here in the community I’m performing for.’”

Fitch, who is also the executive vice president and partner at Coaching Charities and has worked with several professional athletes, said Simmons' work the past year has been "nothing short of remarkable."

"To have a heart like he has and to make time all the time is extremely rare and I just don’t think he gets the attention that he deserves," Fitch said. "And even though he’s a back-to-back Walter Payton Man of the Year nominee, I still feel that’s not enough for what he’s done. Justin has paid utility bills, he’s done Zoom calls, he’s mentored kids — and there’s some great guys in the league, but he’s at the top of that list in my eyes."

That makes Simmons atop of two lists: the highest-paid safety in the NFL and one of the most giving individuals in football.

So according to those who have seen him exceed expectations on and off the field, Simmons was worth every penny of his new contract. To them, he represents so much more than his All-Pro status on the field.

To them, and much of Denver, he represents what the city aspires to be.

“I am so thankful that he’s coming back,” Barrows said. “I think he is just one of the best examples of a loving, caring individual that happens to be a Denver Bronco football player. He really loves and cares about this community and the kids and the people in it.

"We need a whole lot more Justins in the world."

Rejoice, Broncos Country. More football is coming to Denver in 2021.