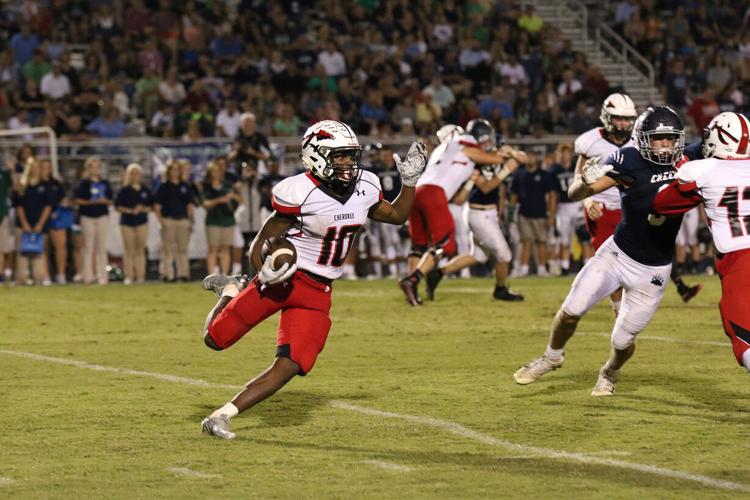 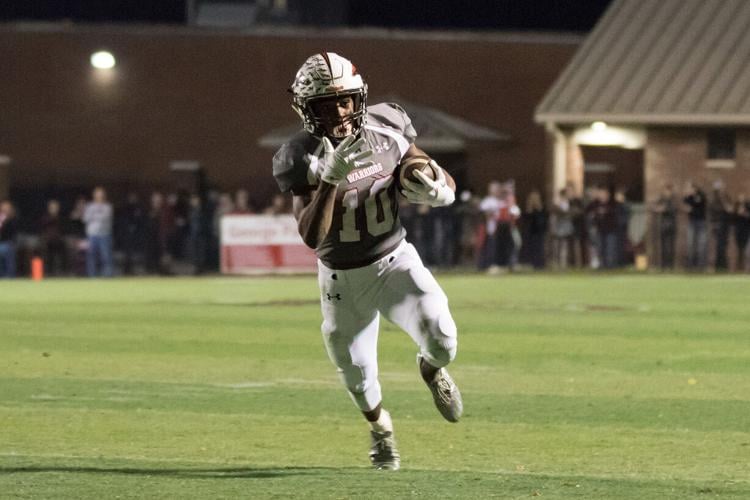 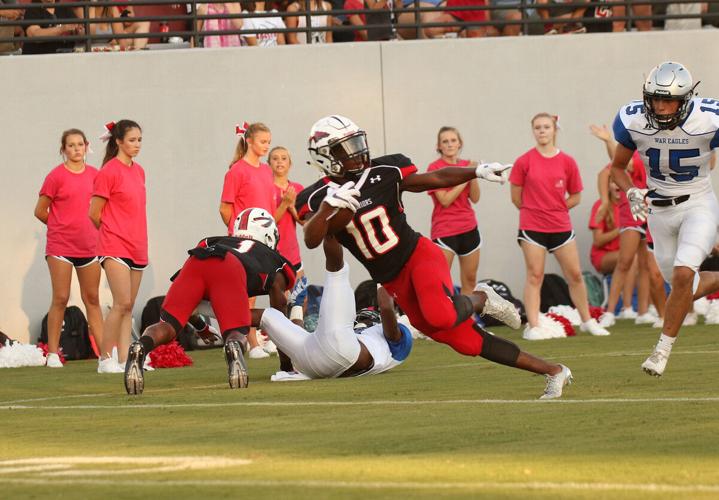 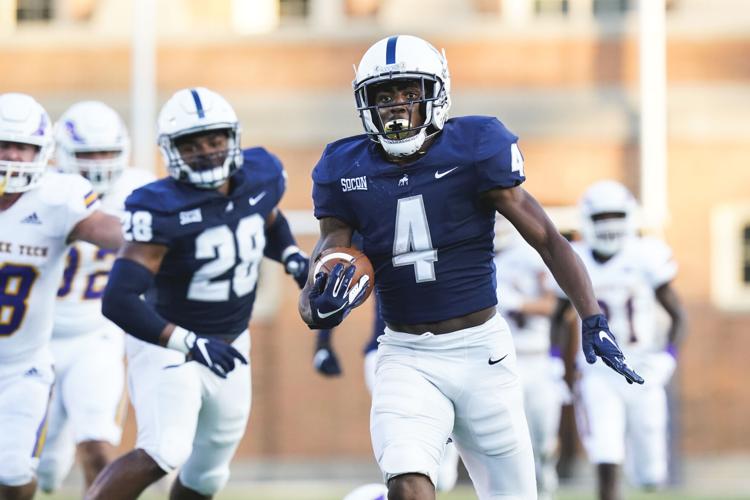 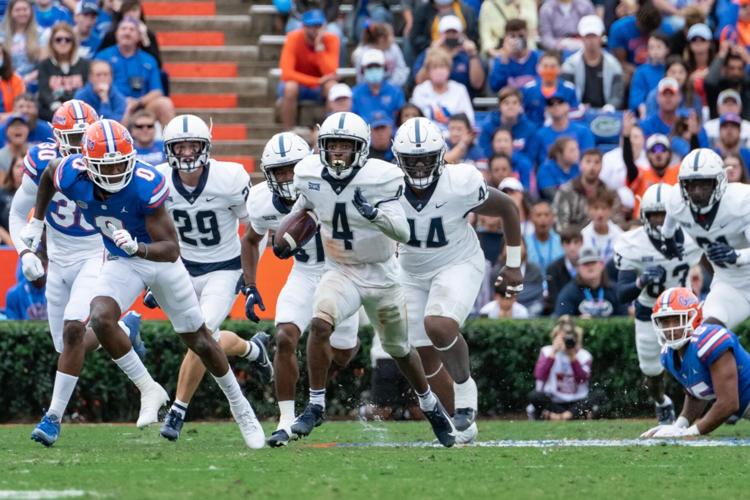 Montrell Washington returns a kick for a touchdown against Florida Nov. 13, 2021.

“I wasn't even worried about the draft to be honest with you,” Washington said on Saturday, just minutes after being drafted. “I just worked and if it happened, it happened. If it didn't, I knew I worked hard at what I did and if it didn't happen, I would have been pleased with the outcome.

“I was watching it, but I'm just ready to get out there and get my one shot and do what I do with that one shot, however it works out.”

Washington wasn’t alone in thinking he wouldn’t get that call this weekend.

CBS Sports ranked him as the 371st best player in the draft. The Athletic’s Dane Brugler had him ranked the 70th best wide receiver. And Pro Football Focus didn’t even have him ranked in their mock draft simulator.

Many outside the Broncos organization are skeptical of how the just over 5-foot-9, 181-pound, do-it-all speedster will pan out in the NFL. But for those who have coached or played alongside him, they believe he’ll be the steal of the draft.

“That’s why the NFL is fun,” said Stephen Jackson, who was Washington’s high school offensive coordinator. “They don’t give a (crap) where you came from or where you played. They want to know one thing — can you play? And Montrell can play.”

Watch Washington’s high school and college highlight reels and it’s easy to see why the Broncos took a chance on him. He makes defenders disappear with his elite agility and quickness. He models his return game after former Chicago Bear Devin Hester, who is considered one of the greatest return men of all time. And he could provide a missing piece to a roster full of talent. He’s expected to be Denver’s punt and kick returner, which has been a Broncos’ struggle recently, owning the fifth-worst punt return unit and 11th-worst kick return unit in the league last season.

“We feel like he can be a duel returner for us,” Paton said. “He's really good with the ball in his hands. He has incredible ball skills.”

Washington still has much to prove, having not even practiced yet, let alone played a game. But it’s his potential that has the Broncos excited. And it’s his journey from an unknown prospect to an NFL Draft pick that could turn doubters into believers.

Jackson spent most of 2014-16 finding new ways to get Washington the ball.

The former Cherokee High School offensive coordinator knew he had a special talent on his hands, after watching Washington play junior high football. And once Washington joined varsity his sophomore season in 2014, it was up to Jackson to get him the football.

“We had him at running back, outside receiver, inside receiver, snapped him the ball directly, ran him on reverses — just anything that allowed him to have the ball with a little bit of space,” said Jackson, now the offensive coordinator at Milton High School.

But his senior year?

Washington had a school record of 93 receptions for 1,086 yards and 10 touchdowns; 74 carries for 801 yards and seven touchdowns; eight kickoff returns for 283 yards (35.4 average) and one touchdown; and five punt returns for 95 yards. He was a first-team All-County, Region and State selection, and was named team MVP and the region’s offensive player of the year. He also broke the school record for single-season all-purpose yards with 2,265.

“The speed was something no one had seen before,” Cherokee head coach Josh Shaw said. “You couldn't give him an inch of space.”

Washington’s most iconic play in his senior season in class 7A, the highest in Georgia football, came against Milton High School when his teammate, who was being tackled, unexpectedly tossed him the ball and Washington reversed field, made five defenders miss, and took it 70 yards for a touchdown.

“He was a killer,” said Andrew Harris, who is Washington’s close friend and former teammate at Cherokee and Samford. “He was the best high school football player I had ever seen.”

Washington garnered little attention from colleges, mostly because of his grades. Shaw said it was a battle to keep him eligible each week.

“His freshman year academically was a little rough and we spent the next three years trying to dig him out of a hole,” said Shaw, who has been Cherokee’s head coach since 2012. “He turned things around and that’s honestly what I’m most proud of.”

Washington worked hard to get his grades up, and eventually found a home at Samford.

“I switched everything up,” Washington said. “I was able to get an offer from Samford, Kennesaw State University, and Valdosta State, and Wingate [University]. Those were my only offers. I chose Samford University — one, my best friends from high school (Harris) went there and they threw the ball a hundred times a game, so I had no choice.”

Like Shaw and Jackson, the Samford coaching staff was unsure of where to exactly play Washington but knew he had to be on the field.

“The biggest thing about Montrell was — what was he?” said Hatcher, Samford’s head coach since 2014. “He wasn’t the best running back. Maybe not always the best wide receiver. But he was the best guy with the ball in his hands that I’ve ever coached.”

He contributed all four years at Samford, playing wide receiver, running back and return specialist. And similar to his time at Cherokee, he had a breakout senior season.

In 2021, he led the FCS with 1,967 all-purpose yards, including 813 receiving yards, 742 kick return yards, 243 punt return yards, 140 rushing yards and 18 total touchdowns — three of which were on special teams. He finished his career with five kick or punt return touchdowns.

“You don’t really want to change your offense around for one guy, but as time went on, we learned what a special player Montrell was,” Hatcher said. “Once he showed that he could be that electric playmaker, we would have been crazy not to get him 20-30 targets a game.”

It was Washington’s performance against Florida on Nov. 13, 2021, though, that put him on the radar of NFL teams.

In a 70-52 loss, Washington had 322 all-purpose yards (179 returning, 124 receiving, 19 rushing) and three touchdowns, including a 98-yard kickoff return for a touchdown and a one-handed touchdown grab. He was the first FCS player since 1998 to record a rushing touchdown, receiving touchdown and kick return touchdown against a Power Five team.

“We expected it from him — I shouldn’t say expected — that’s just how he played each and every week,” Hatcher said. “It didn’t matter what the competition was ... On that given Saturday, he proved what he could do against the very best competition in the country.”

Since the season’s end, Washington has spent most of his time training with Harris and former CFL cornerback Willy Dorcin.

He wasn’t invited to the combine, but did work out at several pro days. He also had private workouts at Cherokee High School with several teams. And he impressed in those workouts, recording a 4.38-second 40-yard dash. Though, according to Harris, he’s seen Washington clock a 4.25 before.

Washington’s speed and versatility stand out. But it’s also Washington’s work ethic and competitive personality that the Broncos want.

Those who have coached and played with him use the common term “locker room guy” when describing Washington, which is exactly what the Broncos prioritize.

Washington has a long ways to go, as Paton said he will have to earn his spot on the 53-man roster. And that won’t be an easy thing to do, with a talented receiver room that consists of Jerry Jeudy, Cortland Sutton, Tim Patrick and K.J. Hamler, plus a veteran kick returner in Tyrie Cleveland.

Washington has been counted out before. And still, he made it to the NFL. Now, it’s time to prove his worth.

“It’s a great story in itself,” Hatcher said. “The guy persevered. He never quit. To be honest with you, I think there were days he probably thought about it, but he didn’t. And he ended up living out a tremendous dream of being a college graduate, an All-American and now gets to perform at the highest level in the NFL. It’s what dreams are made of and it couldn’t have happened to a better person.”

Jerry Jeudy hoping for productive season with Russell Wilson as his quarterback: 'He could help me a lot'

ENGLEWOOD — Few Broncos should be more excited for the 2022 season than Broncos receiver Jerry Jeudy.