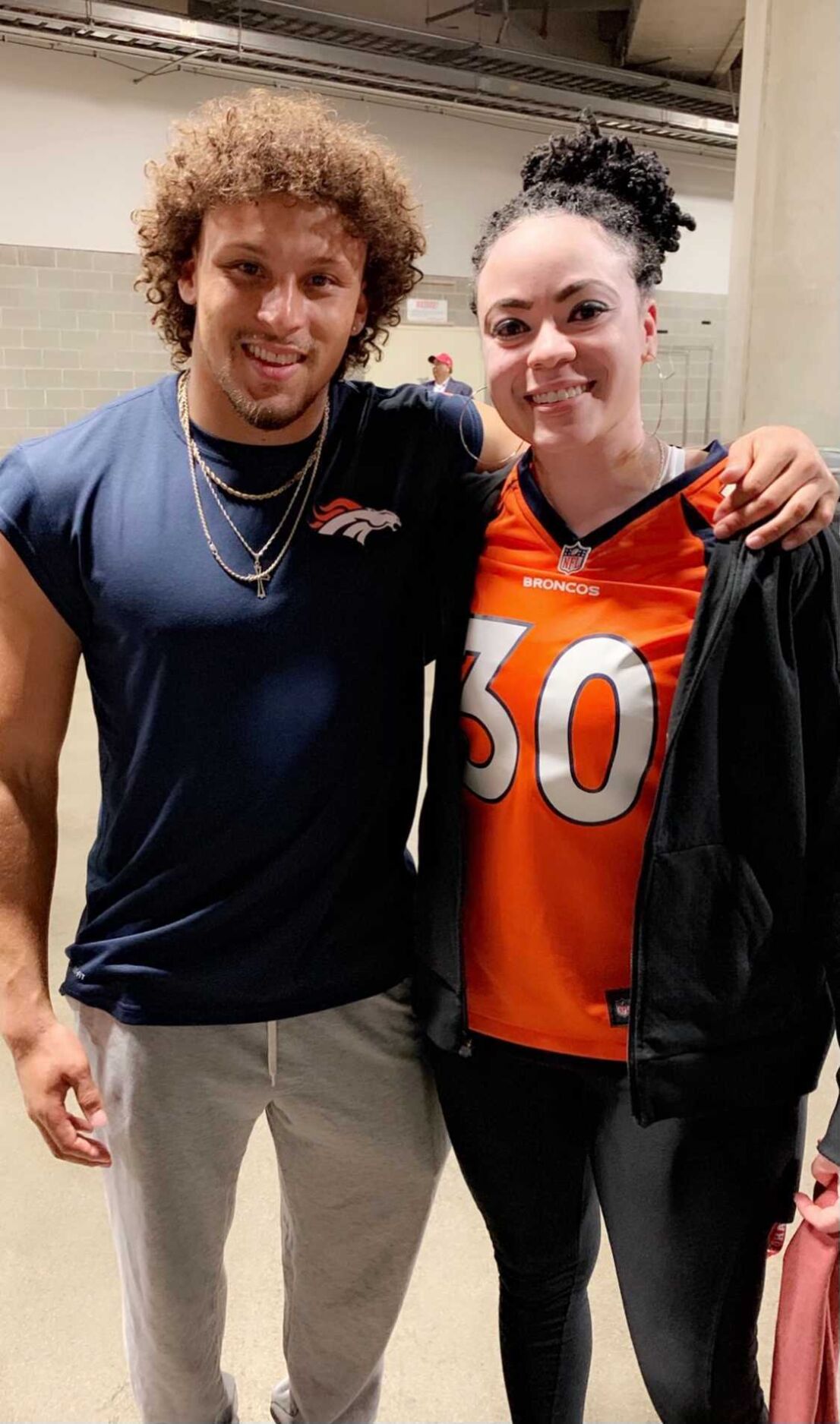 Phillip and Cheri Lindsay pose after a Broncos game in 2019. Colorado natives, the Lindsays have supported each other’s careers all their lives. 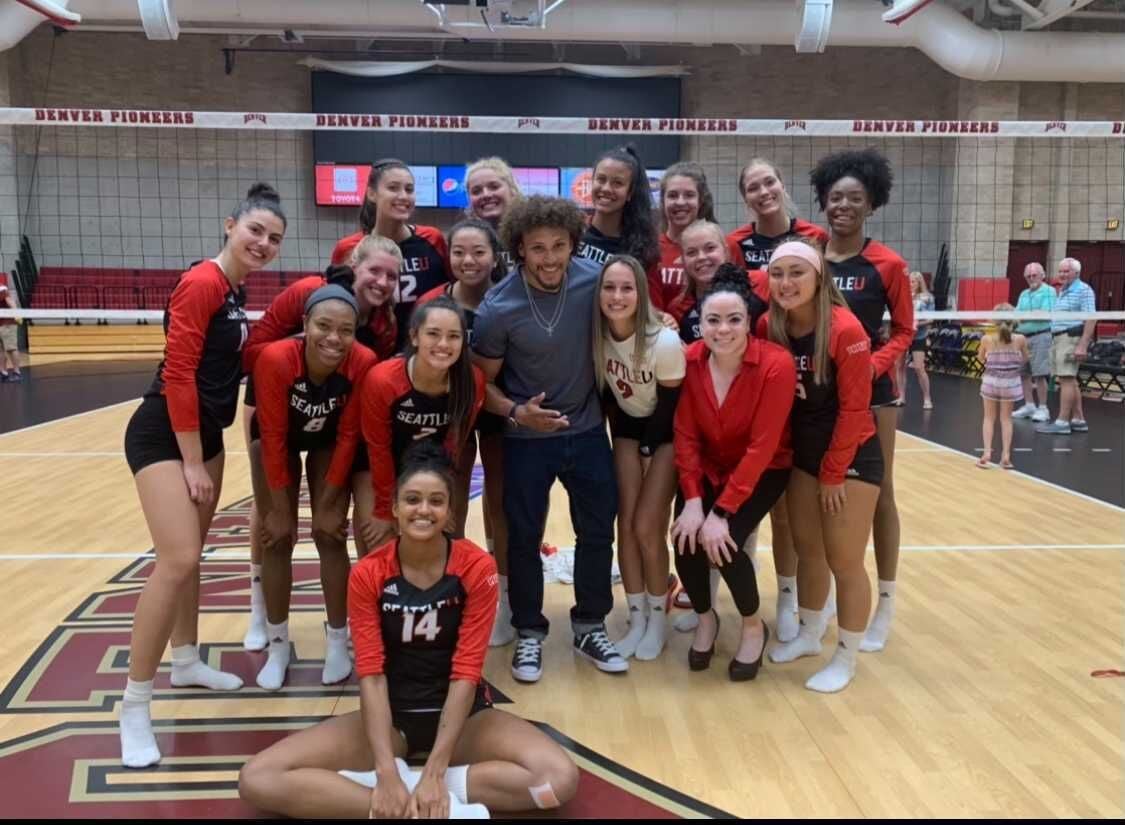 Phillip Lindsay poses with Seattle University’s volleyball team, where his sister, Cheri, was the assistant coach in 2019. Seattle played Denver University on Aug. 31, 2019.

Phillip and Cheri Lindsay pose after a Broncos game in 2019. Colorado natives, the Lindsays have supported each other’s careers all their lives.

Phillip Lindsay poses with Seattle University’s volleyball team, where his sister, Cheri, was the assistant coach in 2019. Seattle played Denver University on Aug. 31, 2019.

Phillip and Cheri Lindsay didn’t always get along.

“Phil was a crybaby,” Cheri said of her younger brother, now a Broncos running back. “He’s going to hate that I said that, but, oh man, he was a crybaby.”

But now, like most brothers and sisters, the two would do anything for each other, including helping the other with their careers, his as an NFL running back and hers as a Division II volleyball coach.

While Phillip is chasing his dream in the NFL in Denver, he’s also supporting his older sister's as the new head volleyball coach at East Central University in Ada, Okla.

"Seeing my sister go for her dreams and her being as successful as she has through the ups and downs, it's really cool," Phillip said. "We're high competitors in everything we do and we care about each other. So I'm not surprised with how successful she is because the type of person she is as a coach."

Phillip has always been Cheri’s biggest fan, going back to her playing days at Byers High School in Denver, where one can easily spot a young Phillip dancing at the top of the bleachers. Today, it's much of the same for the entire Lindsay clan.

Last year, when Cheri was an assistant coach at Seattle University, the whole family showed up to their match against Denver University — her mom and dad, Troy and Dian, her older sister, Sparkle, and, of course, her three younger brothers, Marcus, Zach and Phillip.

“We are a very close-knit family," Cheri said. "When you’re a Lindsay, it’s just a way of life. You try to help each other."

With Cheri and Sparkle both playing collegiate athletics, Phillip said his older sisters inspired him and his brothers at a young age to chase their dreams.

"We were always competing against each other, always making each other better," Phillip said. "When they went to college, it made the three boys want to go to college. When they got a degree, it made us want to get a degree. They were definitely the starting point to us having success in sports and everything else."

Cheri, 31, takes over a program that’s only won two matches in the last two years and hasn’t posted a winning season in its 12-year history. A former player at Prairie View A&M and coach at Seattle University, Tiffins University and Bethany College, she knows what it takes to win at the collegiate level.

Her goal is to flip the East Central program upside down and to do that she needs some help, which is why she started a fundraiser to help raise $8,000 for new equipment.

“It’s a total revamp. Everything just needed to be shaken up a little bit, so that’s what I’m doing,” Cheri said. “We are in need of a new netting system and net systems are typically expensive. Neither one of our nets are 100%, but what I’m looking to get is a new game net with new poles and ref stand and all that. And of course balls — I don’t think they’ve had new balls in quite some time. And just overall gear and upgrades. So yeah, a little goes a long way, for sure.”

That's why Phillip shared the fundraiser’s link Monday on Twitter.

SPORT FANS! My sister is the new Head Volleyball Coach at East Central University. She is building the team from scratch so any donation will help them reach their goal of $8000.00. Let’s help them reach it! https://t.co/JNIWuDqpMu

But Cheri says Phillip offers more than his 73,000-plus Twitter followers of mostly diehard Bronco fans who might have contributed to the fundraiser. He's often the person she's called for advice throughout her coaching career.

“Now that we’re older, it’s really interesting how you go from being the one that they’re always coming to for advice to now trusting them enough to give you some feedback,” Cheri said. “There’s times when I’m frustrated with my team and I’m calling Phil and I’m just going off. And Phil’s always so calm. I think that’s what’s been so shocking for me. I mean, he really thinks through things where I’m a little bit impulsive. He’s a relaxing presence and helps me think of things in a different way.

“He's definitely not a volleyball expert, but when you’re in sports and you’re in competition and just the way we’ve been brought up, he understands the frustration that us as coaches deal with.”

And Cheri has returned the favor, offering some of the best advice he's received in his young career.

"She tells me to be where my feet are," Phillip said. "Take it for what it is. Embrace it. And just be there. Don't worry about anything else that's happening. What can you do to help yourself in this moment?"

Similar to last year, Cheri said Phillip is planning to try and make a match or two this season, as East Central will be playing a spring schedule while he's in the offseason. She expects her whole family will, too.

Because, as she said, that's what Lindsays do, whether it's at Empower Field on Sundays or the Kerr Activities Center in Ada.

“I think being in the family that we have, it’s so much competition, but it’s like that healthy competition where we’ll sit at the table and talk about stuff and we’ll laugh and yell at each other," Cheri said. “And now I get the opportunity to make something my own and make it my own program and do my own thing. They know I’m hard-headed, I’m stubborn and I’m going to do what I have to do to make my program well. Having all their support is my driving force.”

After a slow start, Jerry Jeudy is hitting his stride for the Broncos. He’s totaled 34 receptions for 552 yards and two touchdowns this season, with nearly half of that production coming in the last three games.