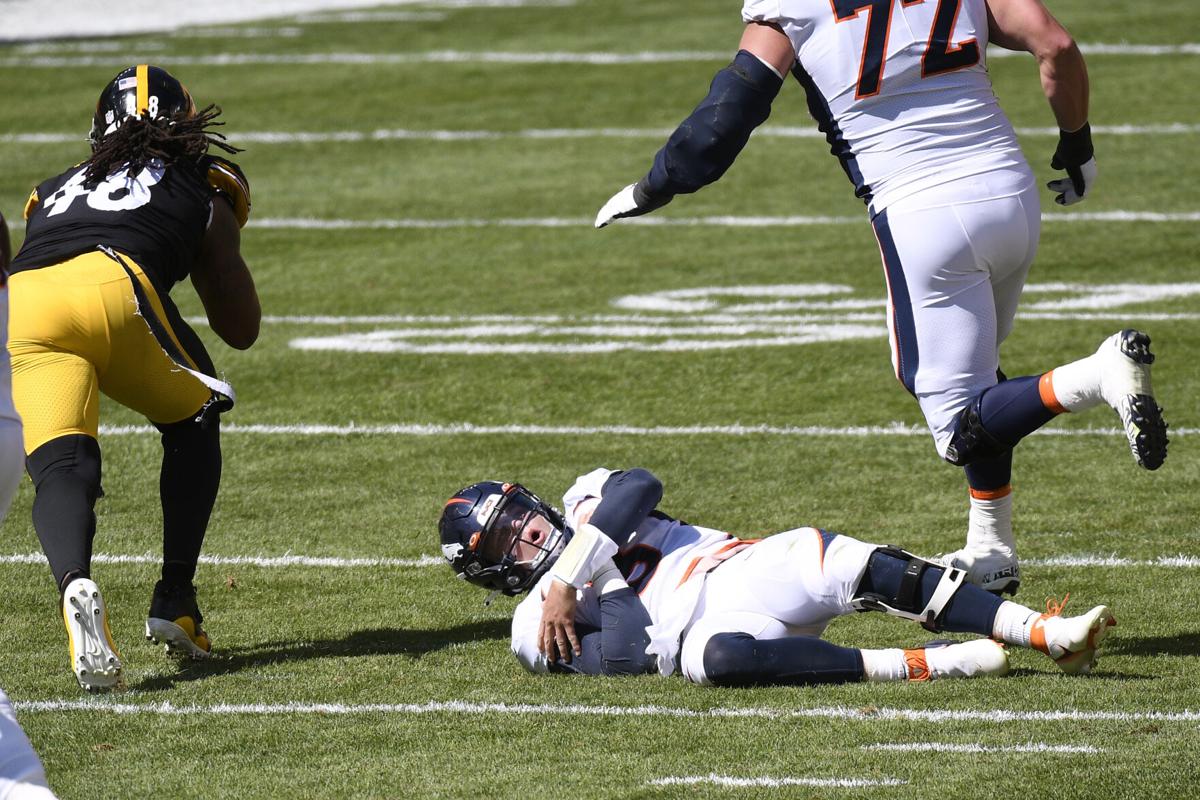 Denver Broncos quarterback Drew Lock (3) holds his arm after being injured while fumbling the ball during the first half of an NFL football game against the Pittsburgh Steelers, Sunday, Sept. 20, 2020, in Pittsburgh. (AP Photo/Keith Srakocic) 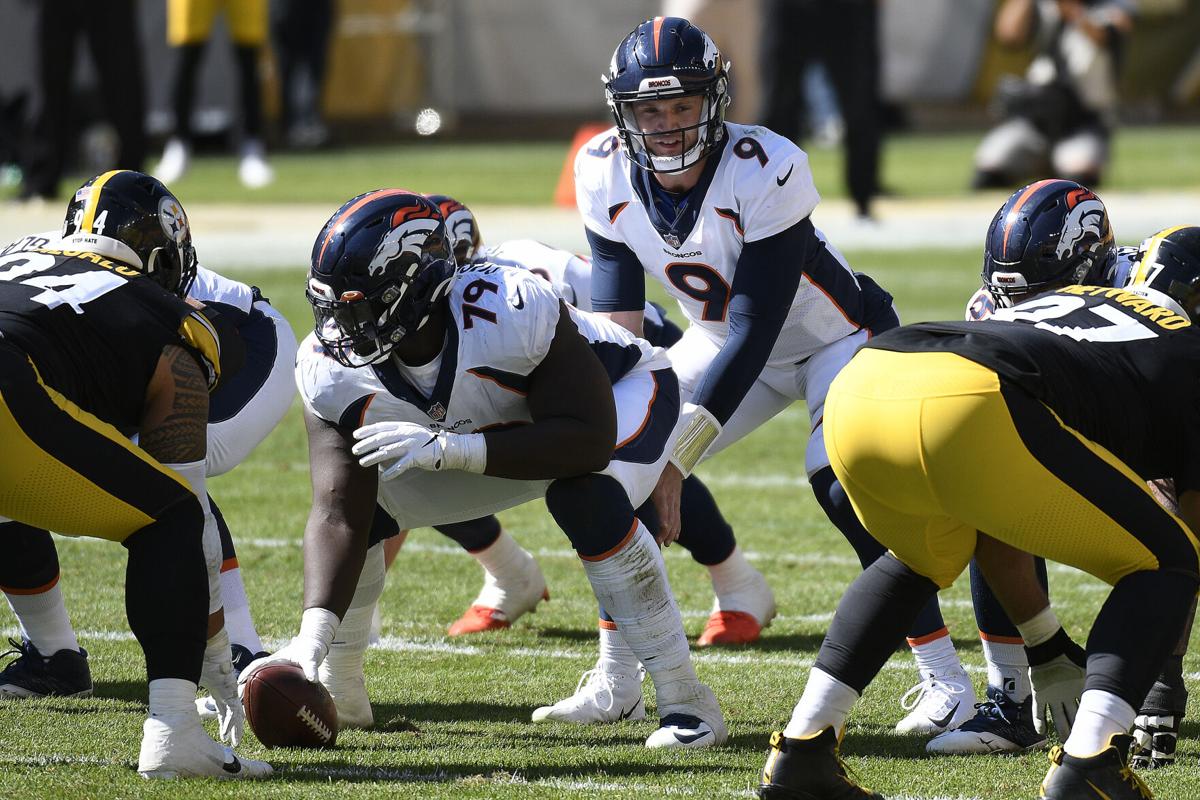 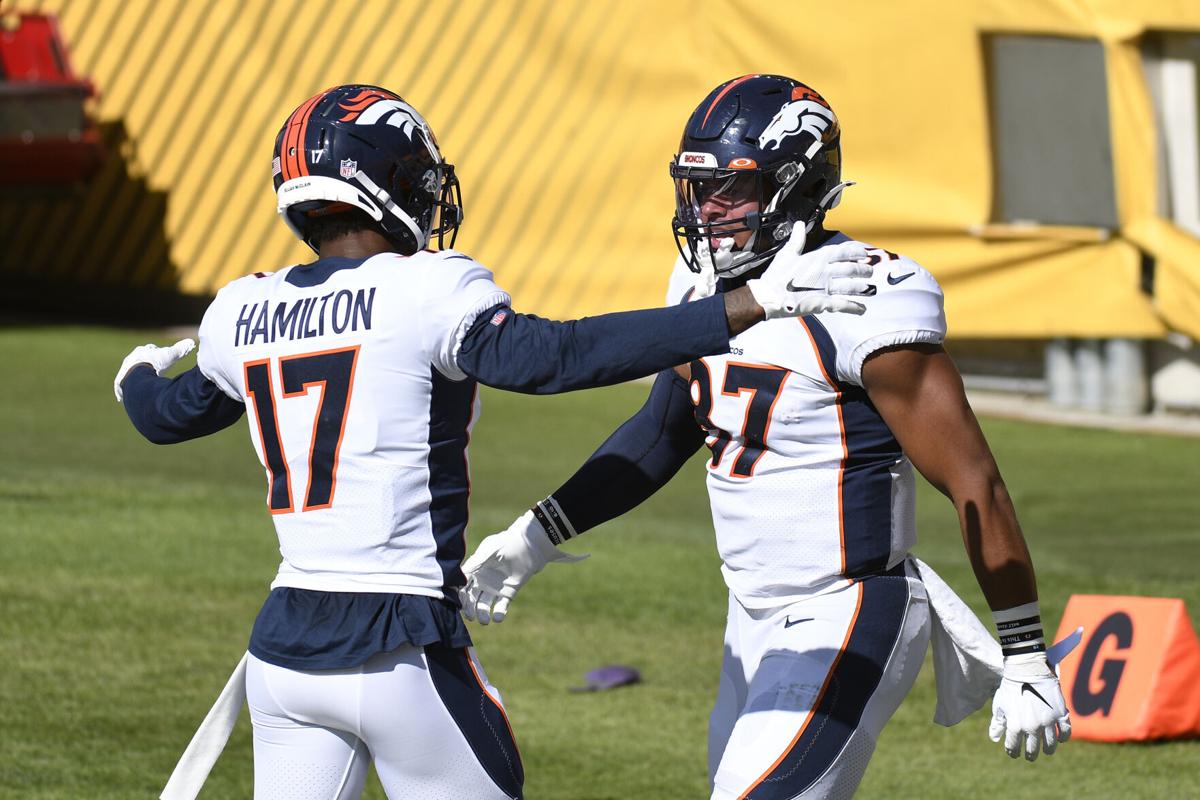 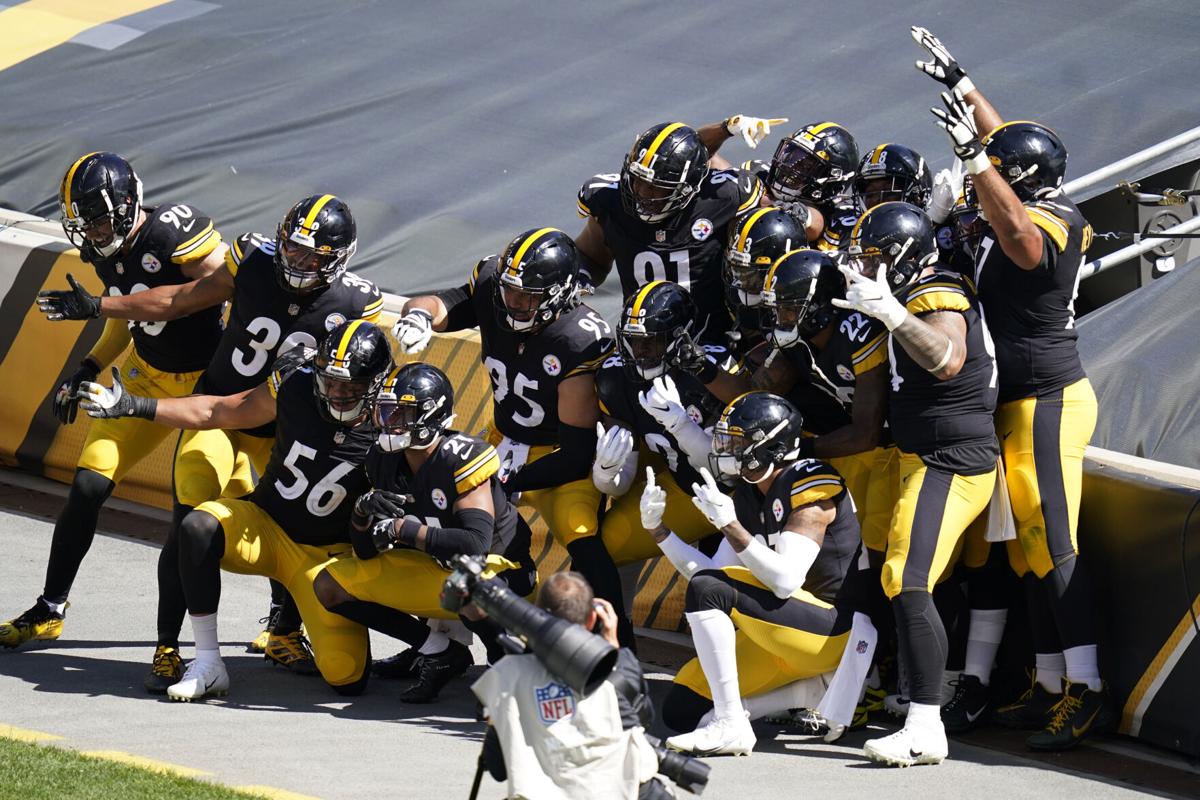 The Pittsburgh Steelers defense poses for pictures after an interception by Joe Haden during the first half of an NFL football game against the Denver Broncos, Sunday, Sept. 20, 2020, in Pittsburgh. (AP Photo/Keith Srakocic)

Denver Broncos quarterback Drew Lock (3) holds his arm after being injured while fumbling the ball during the first half of an NFL football game against the Pittsburgh Steelers, Sunday, Sept. 20, 2020, in Pittsburgh. (AP Photo/Keith Srakocic)

The Pittsburgh Steelers defense poses for pictures after an interception by Joe Haden during the first half of an NFL football game against the Denver Broncos, Sunday, Sept. 20, 2020, in Pittsburgh. (AP Photo/Keith Srakocic)

The Broncos went all-in with quarterback Drew Lock, so they were left scrambling Sunday when he went out.

Denver managed several rallies behind backup Jeff Driskel after Lock went out in the first quarter with a shoulder injury but eventually fell 26-21 at Pittsburgh.

The Broncos are 0-2 for the fourth time since the AFL-NFL merger in 1970. They have never reached the playoffs after dropping their first two.

“We’ve proven we can put ourselves in position to win against two really good teams—two teams that most people have picked to go to the playoffs,” said coach Vic Fangio, whose tenure is quickly being defined by near misses.

There were two issues that defined Sunday’s game at Heinz Field, and they overlapped – Pittsburgh’s ability to get to Denver’s quarterbacks, and the Broncos' inability to keep key players healthy.

The Steelers had seven sacks, two takeaways and a safety. The most consequential play, and one that might keep Denver reeling for weeks to come, occurred when Isaiah Buggs flushed Lock out of the pocket with pressure up the middle. Stumbling to his right, Lock was then hit by Ben Dupree with a hit that jarred the ball loose and brought Dupree down on top of the second-year quarterback.

The Broncos had committed to Lock – who went 4-1 late last year as a rookie second-round draft pick – in the offseason, opting against an established backup who might provide a challenge to the position. They instead brought in Driskel, who is with his fourth franchise as a career backup and owns one victory.

And because the focus is developing a young quarterback, Lock monopolized first-team reps in practice throughout the week.

Pittsburgh jumped ahead 17-3 at halftime, but the Broncos closed to within three points at 17-14 after a field goal and a Driskel touchdown pass to Noah Fant (with a 2-point conversion also going to Fant).

The Broncos had the ball in Pittsburgh territory in the final two minutes, trailing by five, but Pittsburgh earned a stop on downs with a sack of Driskel on a blitz from safety Terrell Edmunds.

“Anybody is capable of coming,” Steelers coach Mike Tomlin said. “That’s kind of the code that we live by.”

Driskel blamed his eye positioning for not picking up Edmunds as he raced untouched off the edge and into an empty backfield without a running back there to get in his way.

“Some of those sacks are on me,” Driskel said. “I’ve got to move around a little bit, try to get the ball out on time. But the more reps you get and live action you get, the more comfortable you’ll be.”

Sounds like those reps might be on the way, as online reports indicated Lock could be sidelined for 2-6 weeks with a sprain in his throwing shoulder.

So it’s next man up. Again. As the Broncos are left reeling by a close loss, again.

“If Drew’s going to be out, I think (Driskel is) a great guy for us to rally around,” Fant said. "Obviously we want Drew back, but Jeff’s a great guy who can do the job.

“I think we have a very resilient team. We have guys who are going to fight.”

Stephen Gostkowski connected on the 25-yard game-winning field goal with 17 seconds remaining in a 16-14 Tennessee victory in the season opener Monday night.