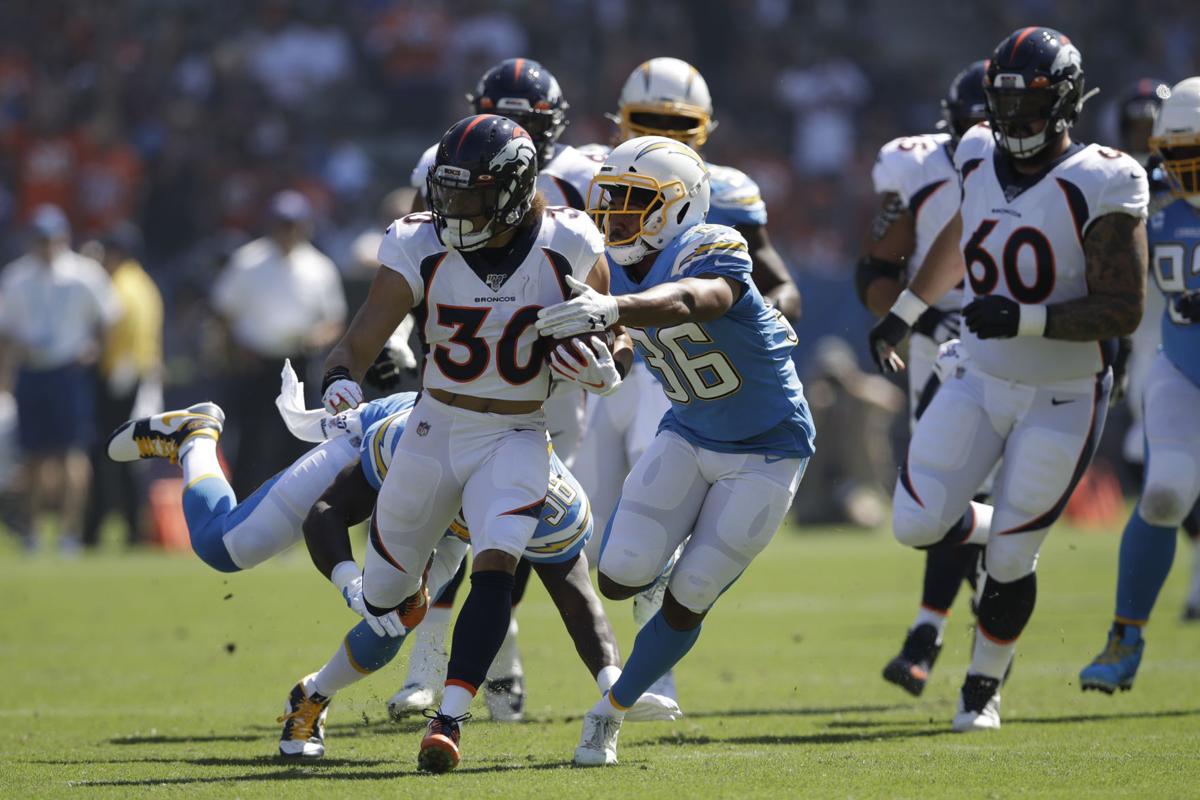 Denver Broncos running back Phillip Lindsay (30) runs against the Los Angeles Chargers during the first half of an NFL football game Sunday, Oct. 6, 2019, in Carson, Calif. (AP Photo/Marcio Jose Sanchez) 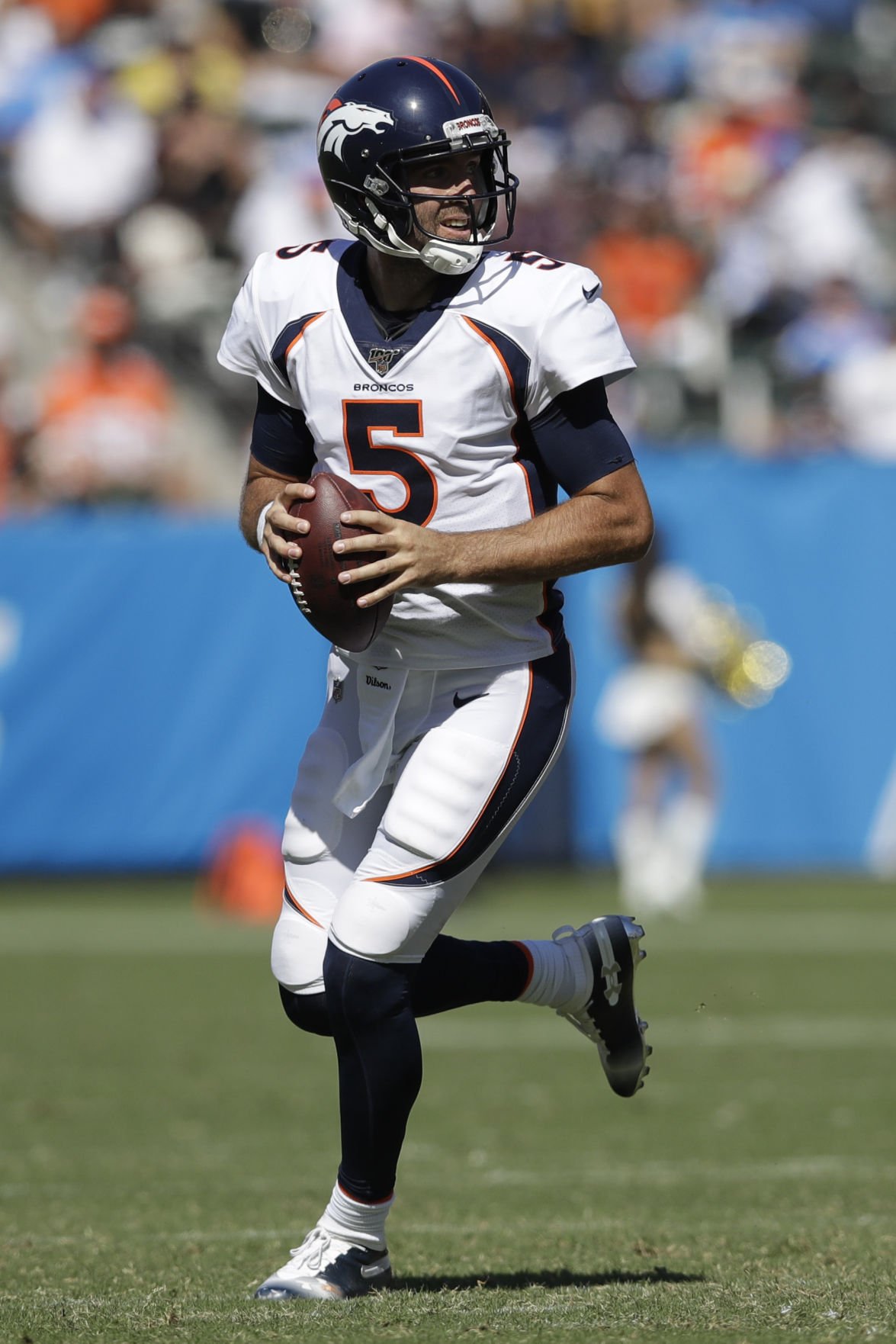 Denver Broncos running back Phillip Lindsay (30) runs against the Los Angeles Chargers during the first half of an NFL football game Sunday, Oct. 6, 2019, in Carson, Calif. (AP Photo/Marcio Jose Sanchez)

Paul Klee's rapid reactions from Southern California after the Broncos beat the Chargers:

1. Colorado’s long nightmare is over, and Vic Fangio celebrated his first win as a head coach with hugs from his players. The losing streak ended after eight games and 308 days. And the Broncos were not afraid to trash talk the Chargers through every second of a mostly lopsided win Sunday afternoon at Dignity Health Sports Park. The Broncos had not won a game since Dec. 2, 2018, so it’s no wonder Kareem Jackson was feeling his oats after a touchdown-saving tackle of Austin Ekeler to close the first half. Denver’s defense locked up the win with a clutch goal-line stand, and the Broncos are back on the board. Just one question: What took so long?

2. One key to the Broncos' rebuild: keeping Mike Munchak around. If the offensive line guru is strutting around UCHealth Training Center, no one should blink an eye. The most important acquisition of the offseason, Munchak is molding the offensive line into a proud unit that can get some things done. The O-line blew up the Chargers during an eight-play, 75-yard touchdown drive to open the game. Aside from Garett Bolles getting beat when Joe Flacco was stripped of the ball, the Broncos’ heavies stood tall on both sides of the ball. Now don’t let Munchak bail. Stick around for a while, coach. The Broncos piled up 192 rushing yards.

3. Football’s fun, and its rewards outweigh the risks — except when a situation like De’Vante Bausby’s happens. With 14:41 still left in the second quarter, Bausby was struck by Broncos teammate Alexander Johnson, a hulking linebacker. Bausby, a slight cornerback who’s listed at 177 pounds, hit the turf, motionless. Bausby was taken to a local hospital and had movement in his extremities, the team said. It was just on Wednesday I had a delightful conversation with the 26-year-old who turned a Division II and AAF career into a starting spot in the NFL. At the same time football afforded him an opportunity, it threatened his well-being. Prayers for No. 41.

4. The first quarter on Sunday was a thing of beauty for Broncos Country. Two touchdowns and the season’s first forced turnover? Like Christmas in October. The Broncos racked up 187 yards of offense in a single quarter. They pounded out scoring drives of 75 and 81 yards, the latter thanks to Courtland Sutton’s 70-yard touchdown catch. (Don’t look now, but Sutton’s evolving into one of the top wideouts in the NFL.) Credit Fangio for pulling out the stops, even if his moves were out of necessity. The coach yanked defensive lineman Adam Gotsis in favor of Coloradan Mike Purcell. He subbed out Isaac Yiadom in favor of Davontae Harris.

5. Can the Chargers continue to play at tiny Dignity Health Sports Park in coming seasons? Asking for some orange-and-blue friends. The Broncos improved to 2-0 at the soccer stadium that’s being used as NFL digs while the Bolts await the completion of their new home, SoFi Stadium. Dignity Health seats 27,000 and offers the best fan experience in the league. SoFi Stadium, the $5 billion facility being built by Stan Kroenke, seats 70,000 — with 260 luxury boxes, 13,000 premium seats and dibs on Super Bowl LVI in February 2022. Kroenke said the stadium will open in summer 2020. The Broncos would be cool with staying right here in Carson.

Woody Paige: Nearly time for a change for John Elway with the winless Broncos?

Columnist Woody Paige says John Elway should relinquish his GM position, and stay as president of football operations, if the Denver Broncos don't improve the rest of this season.