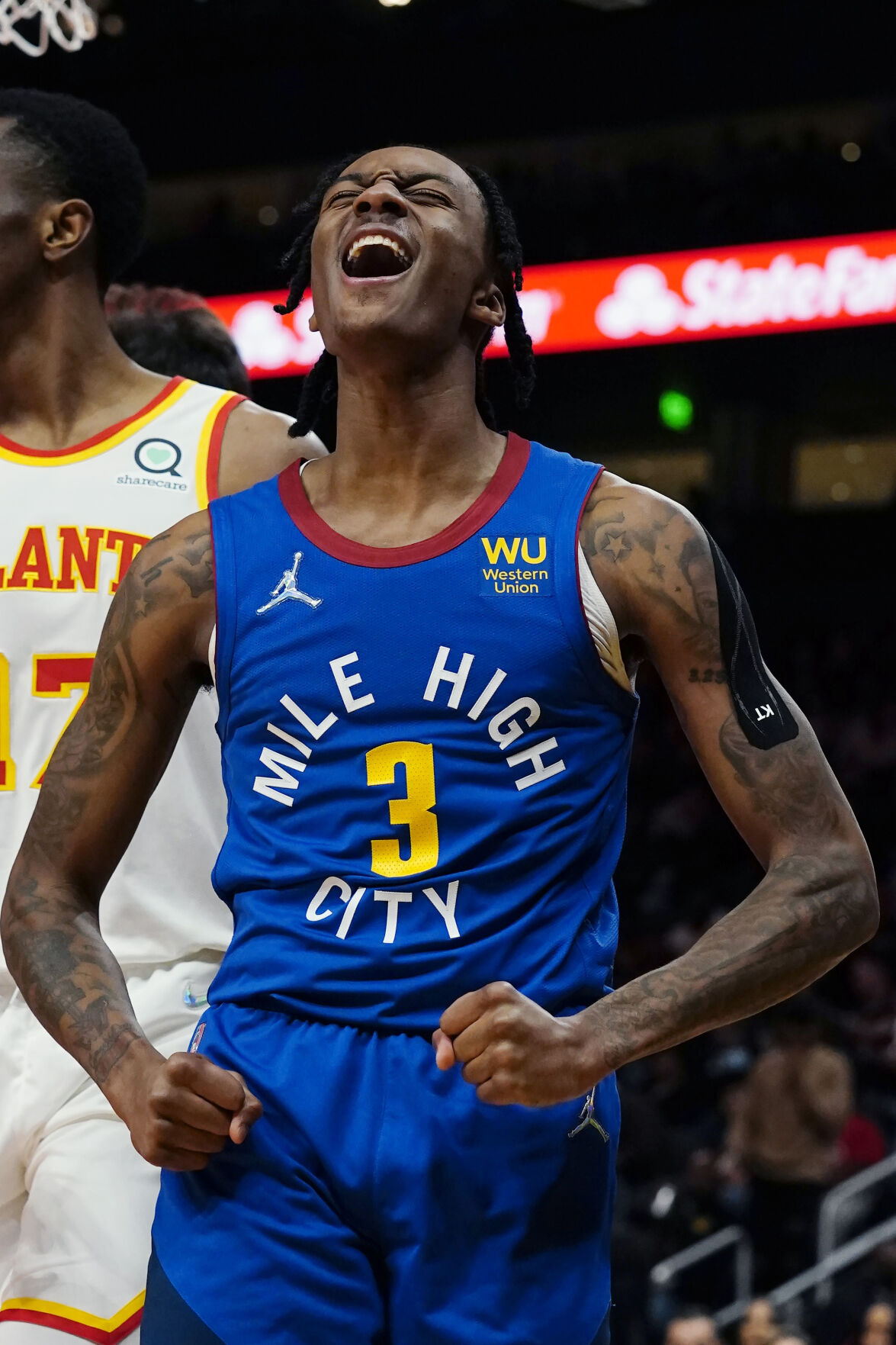 Denver Nuggets guard Bones Hyland (3) reacts after a basket during the second half of an NBA basketball game against the Atlanta Hawks Friday, Dec. 17, 2021, in Atlanta. (AP Photo/John Bazemore) 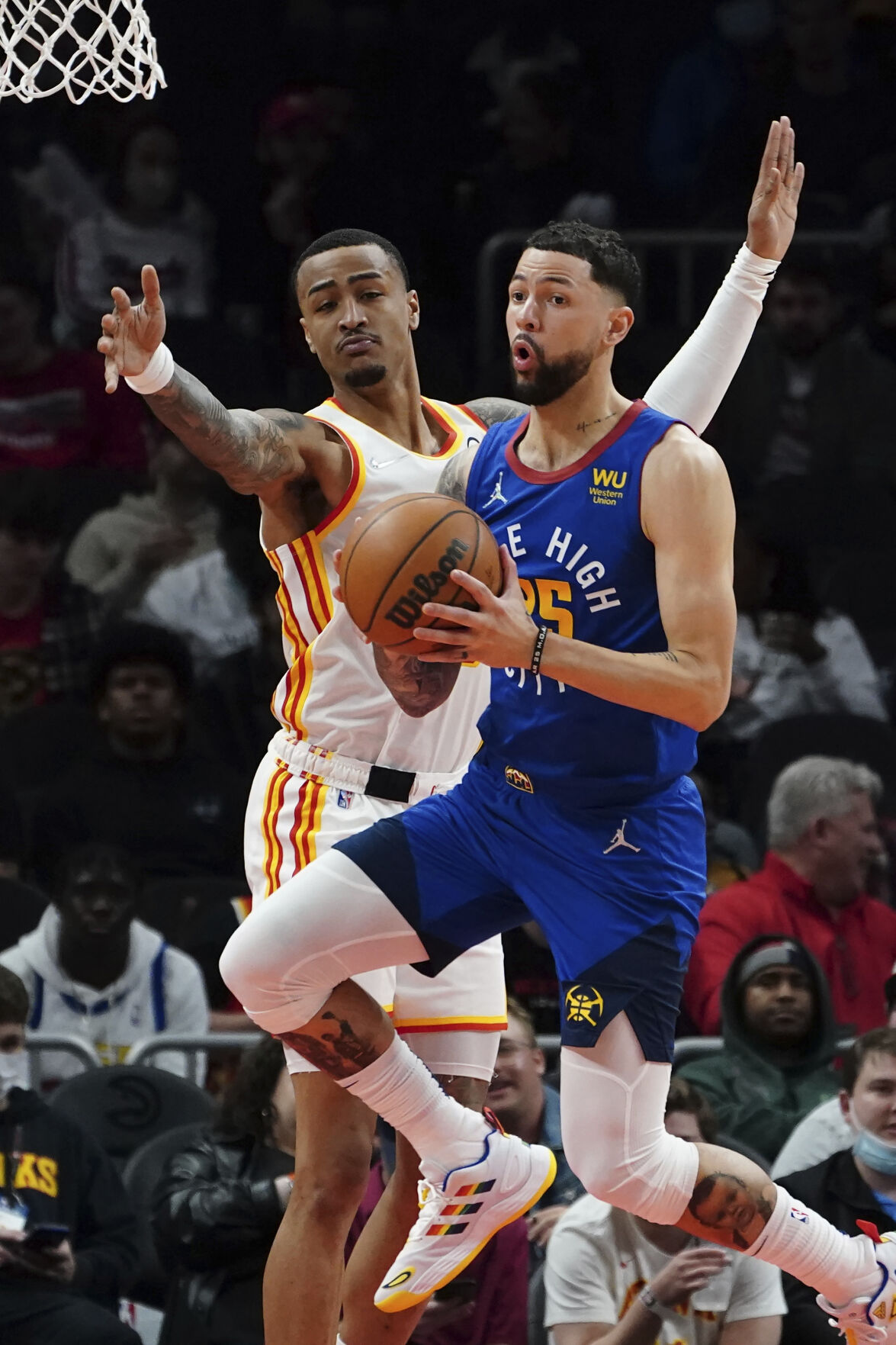 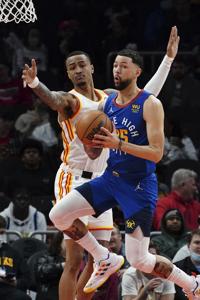 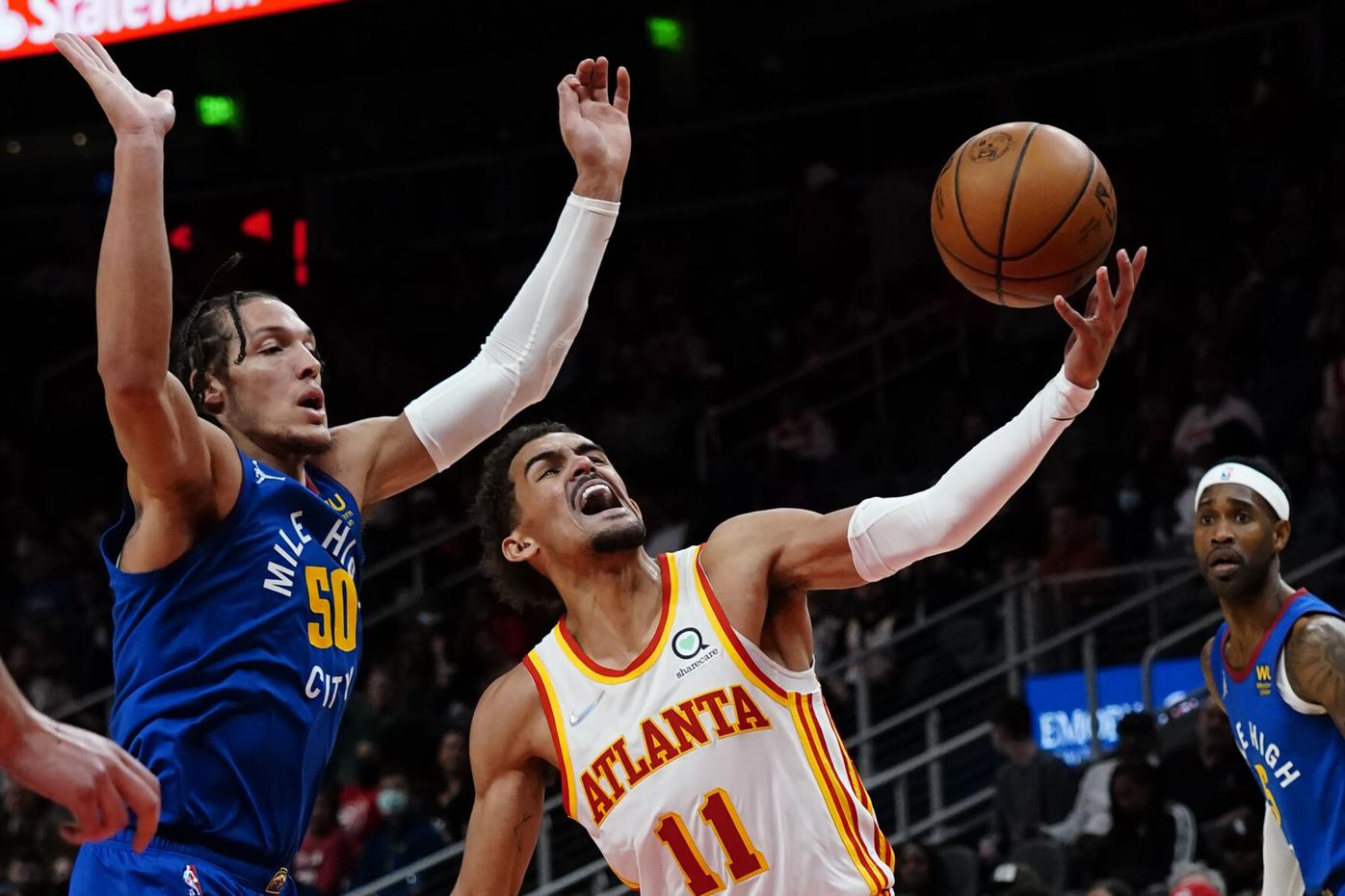 Denver Nuggets guard Bones Hyland (3) reacts after a basket during the second half of an NBA basketball game against the Atlanta Hawks Friday, Dec. 17, 2021, in Atlanta. (AP Photo/John Bazemore)

The absence of Bones Hyland and Austin Rivers varied in length and severity, but their return to the rotation provided a boost in the Nuggets’ 133-115 win over the Hawks on Friday in Atlanta.

After being sent home Wednesday for a violation of team rules, Hyland led six Nuggets in double figures with a new career-high 24 points.

“We missed Bones last game. We need him here,” Nuggets coach Michael Malone said. “I know he’s a rookie. I know he’s the 26th pick in the first round. I don’t care about any of that. He’s a good player. He’s helped us win games this year, and we’re a better team when Bones Hyland is available. He knows that. This is a learning process for all young men. Tonight, He’s back with the team. He learned his lesson, and he helps us get a really important road win.”

Malone declined to detail the reason for the one-game suspension. Hyland said he was moving on, and he did by making 8 of his 11 shots from the field, including a 4-of-5 mark from 3-point range with four rebounds, two assists and two blocks.

“It was a point of emphasis to myself to be, you know, locked in and just go out there and provide whatever I can,” Hyland said.

“Lesson learned, you know, move on from it.”

Hyland’s output was a big chunk of Denver’s 51 bench point, while Rivers added 11 points, three rebounds and an assist in 17-plus minutes after missing more than two weeks with COVID-19.

“It was hard. I actually got sick, so I had a couple nights where I was struggling breathing a little bit and was nervous with that,” Rivers said. “The COVID stuff is really no joke. I thought being vaccinated and being young, I didn’t think I would have symptoms, but I ended up having them. I just kind of had to work through that.”

The veteran guard said he was biking and running to try to maintain his fitness and watched his clips from earlier in the season while he couldn’t play. He wasn’t thrilled with what he saw in his game but credited the Nuggets’ training staff with having him feeling good before Friday’s return when he scored in double figures for the third time this season.

“I wasn’t being as aggressive. To be completely honest, I kind of came into the season not mentally right. I just had a lot of stuff going on internally. I just wasn’t really the player that I was last year for this team,” Rivers said.

“I just wasn’t myself. I wasn’t having the same joy playing basketball, and this is the best job you can have in the world, you know what I mean? I’m so blessed to out here and thankful. So, it just kind of gave me a chance to just really lock back in, man.”

Nikola Jokic finished with 20 points, 10 rebounds, seven assists and three steals, while Monte Morris (21), Jeff Green (20) and Aaron Gordon (16) also scored in double-digits as the Nuggets set a new season-high in points. The Nuggets finished with 35 assists, 17 made 3-pointers and 60 points in the paint.

Trae Young led the Hawks with 34 points, nine of which came on 10 free throw attempts. He made 12 of 27 shots from the field.

“I know Trae Young wound up with 34 points. I thought Aaron Gordon did a hell of a job on him once again,” Malone said. “He’s a hard cover. As well as Nikola being in all those pick and rolls, being up and being active.”

The Nuggets scored 15 of the game’s first 18 points, opening a double-digit lead in the first four minutes. Atlanta answered with a 16-2 run to erase the deficit before Facundo Campazzo’s 3-pointer in the final seconds of the first quarter broke a tie and gave the Nuggets a 29-26 advantage. Campazzo, playing alongside Rivers and Hyland with the second unit finished with seven points and a team-high eight assists to go with three rebounds and three steals.

“If we’re attacking and we’re playing for one another like that, it’s going to be very hard to slow us down.”

Hyland caught fire early in the second quarter, helping the Nuggets regain a double-digit advantage. Jokic and Gordon, who hit consecutive 3-pointers, continued the offensive production when the starting group returned, leading the Nuggets to a 24-point advantage late in the second quarter before Atlanta scored the final six points before halftime.

The Nuggets maintained a double-digit lead throughout the second half even though Jokic had to take a seat after picking up his third and fourth fouls in the first two minutes of the third quarter.

Prior to Friday’s game, the Nuggets announced reserve guard Markus Howard, who provided some quality minutes when Rivers or Hyland or both were unavailable, would be re-evaluated in six weeks after suffering a sprained left knee in Wednesday’s game. Without Howard as a back up option, the Nuggets will be relying more on their bench guards, two of which just returned.

“I think every time Bones is available and plays, he does something positive. I thought Austin was really good as well. This is a guy that has been out for awhile with the COVID and just getting back and trying to get in game shape,” Malone said. “But that’s two quick, downhill, attacking guards that can also stretch the floor and make 3s.”

The Nuggets are scheduled to continue a three-game road trip Sunday against a Brooklyn Nets squad that had seven players in health and safety protocols Friday.

Denver Nuggets' game in Brooklyn postponed due to COVID-19