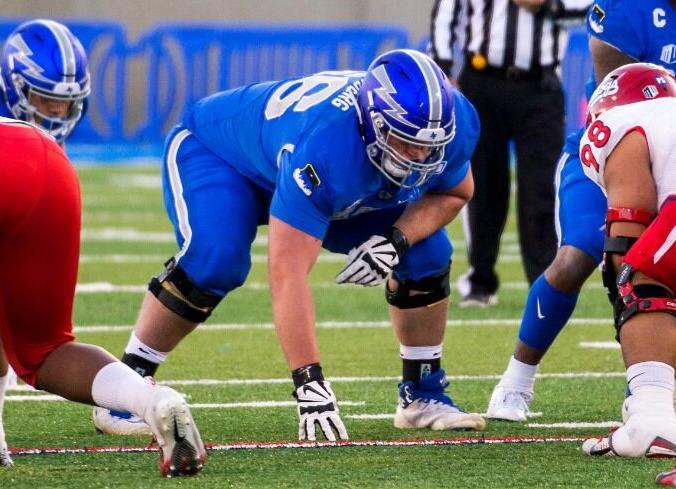 Guard Nolan Laufenberg has made a case to be included among Air Force's all-time best players. 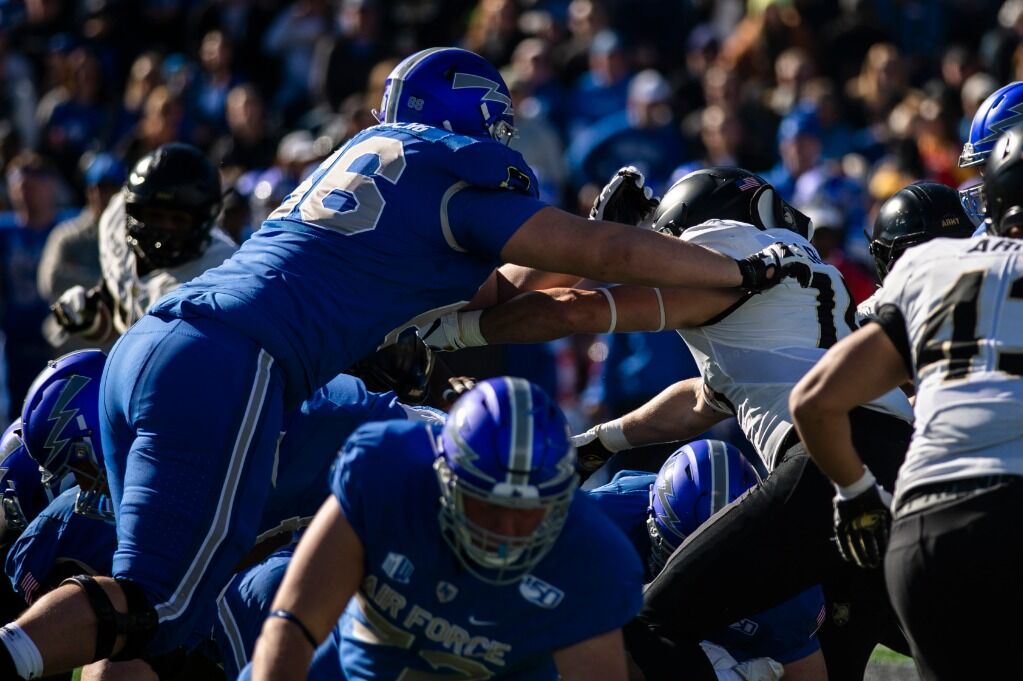 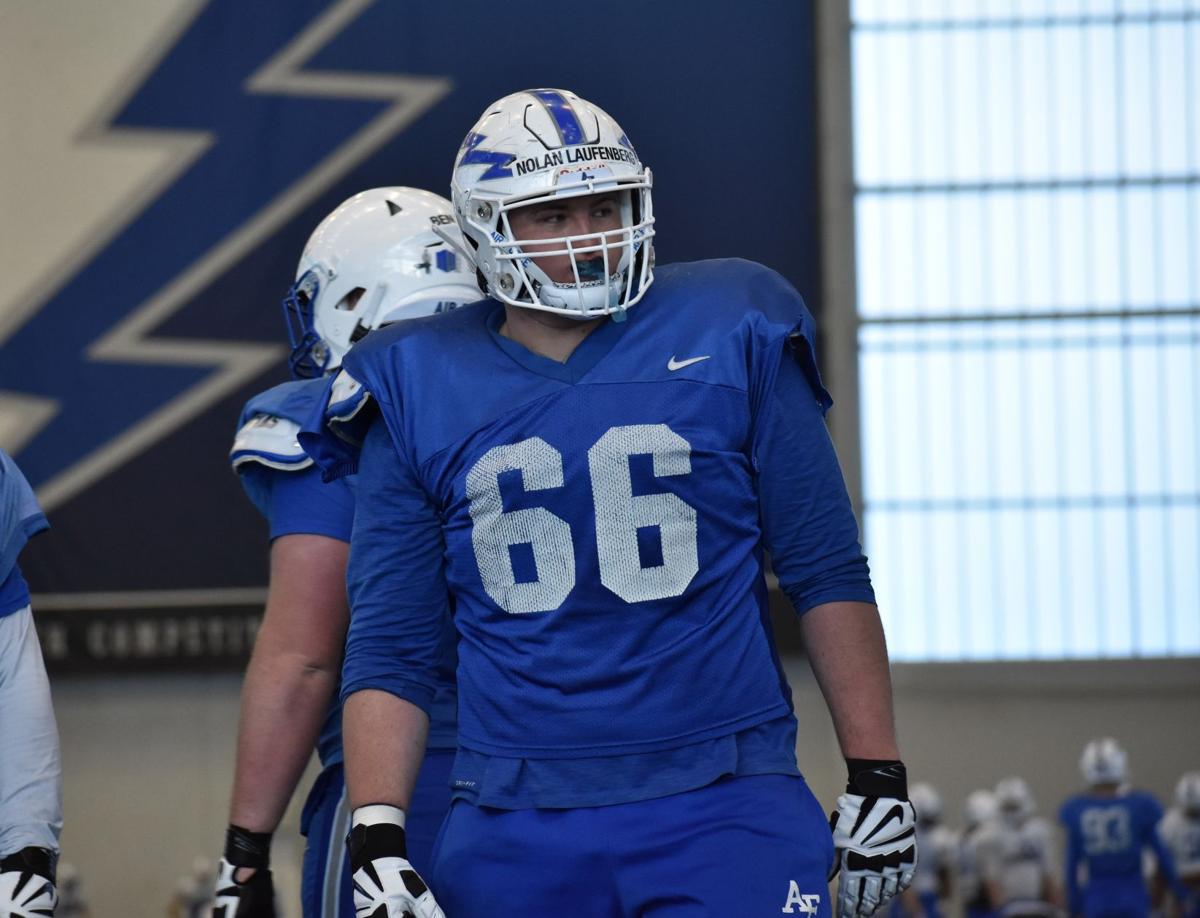 Guard Nolan Laufenberg has made a case to be included among Air Force's all-time best players.

The preseason All-American left guard will (likely) take his final snaps for Air Force, leaving a legacy that, by nature of the position, can’t necessarily be quantified.

A good starting point would be his measurables. At 6-foot-3, 315 pounds, he’s probably the largest offensive linemen to see action for the program.

“Definitely standing next to him, I look like his little brother,” said 6-foot, 285-pound center Nick Noyen.

This week he was named to the All Mountain West’s first team, the first offensive lineman from Air Force to earn that distinction twice since the program began conference play in 1980.

He was second-team preseason All-American pick honoree from Walter Camp, USA Today and the Associated Press. A top-five preseason lineman by Pro Football Focus, a third-team All-American by Phil Steele magazine, a starter on the Group of Five lineup by College Football America Yearbook and a member of the Outland Trophy watch list.

He has graded out at 93% this season, best on the team. He’s averaging 13.6 knockdown blocks per game in his four appearances this year. He averaged 21 knockdowns last year, which led the team by 7.5 per game.

But none of that quite captures it like hearing from Noyen, a senior first-time starter who described his anxiety in this year’s opener against Navy that was quelled when Laufenberg helped with a double team.

“He came by to double team and give me push,” Noyen said. “Guys were just flying all around him. I was like, ‘That’s definitely helpful.’”

Coach Troy Calhoun noted that Laufenberg had no other NCAA Football Bowl Subdivision offers when he committed to Air Force from half an hour up I-25 in Castle Rock. He then put in the work to change his body over three years.

“Nolan was raised in a family that values… that sees what healthy competition can do,” Calhoun said. “Not only athletically, but some of the pursuits you can have outside of football. That’s a real tribute to dad, and to mom, too.”

A testament to Laufenberg’s worth came Oct. 19 when Air Force visited San Jose State and had to leave the guard behind because of COVID-19 contact tracing protocols.

The Falcons have told players they won’t play in a bowl game, so, barring a reversal of that position, Saturday will wrap the career of Laufenberg and a senior class that also includes offensive tackle Parker Ferguson, who has started three years next to Laufenberg and could also make a case for inclusion in the upper echelon of players at his position for the program.

But where will Laufenberg be remembered?

When Dee Dowis finished his career with an invitation to the Heisman Trophy presentation in 1989 (finishing sixth) he left with the Falcons’ still-standing rushing record. When Chad Hennings’ career wrapped he had 34 sacks and the Outland Trophy. Carlton McDonald and Weston Steelhammer had a combined 34 interceptions, Ernie Jennings had 148 catches and, thanks to those accolades and countable statistics, their places in the program’s pantheon are without dispute.

It is more difficult to speak confidently about those toiling anonymously up front.

On the offensive line, Air Force hasn’t had a consensus All-American since Brock Strom in 1958. A few others – Orderia Mitchell (1972), Dave Schreck (1982), Frank Mindrup (1998) and Brett Huyser (2002) – have appeared on All-American teams as second- or third-team representatives. Laufenberg’s status would be secured if he makes that list, but as the College Football Playoff rankings have shown, recognition based on reputation (as offensive line votes often are) can be hard to attain for those outside the sport’s inner circle.

Maybe he’ll add to his credentials after leaving the program, as an NFL future is certainly within reason for him. For Ferguson, too.

In Laufenberg’s lone interview session with media this year, he spoke in front of a banner reading, “Army and Navy play of second.” When talking about the missed game (he never tested positive for the virus), he noted only the frustration of “wanting to be out there with my brothers.”

So, perhaps talk of a legacy can wait. He can still help to ensure Army and Navy were indeed playing for second last week as the Falcons close at West Point on Saturday in a winner-take-all battle for the Commander-in-Chief’s trophy. He’ll do that alongside his teammates. And he’ll be opening holes for players like Kade Remsberg, Haaziq Daniels and Brad Roberts, as they accrue stats that can be counted and slotted into definitive places in the team’s record books. That is, after all, what linemen do. And maybe, just maybe, nobody at Air Force has ever done it as well as Laufenberg.

Air Force has taken a neutral-site game to the Dallas-Fort Worth area before, playing New Mexico in 2016 in a game that was widely considered …