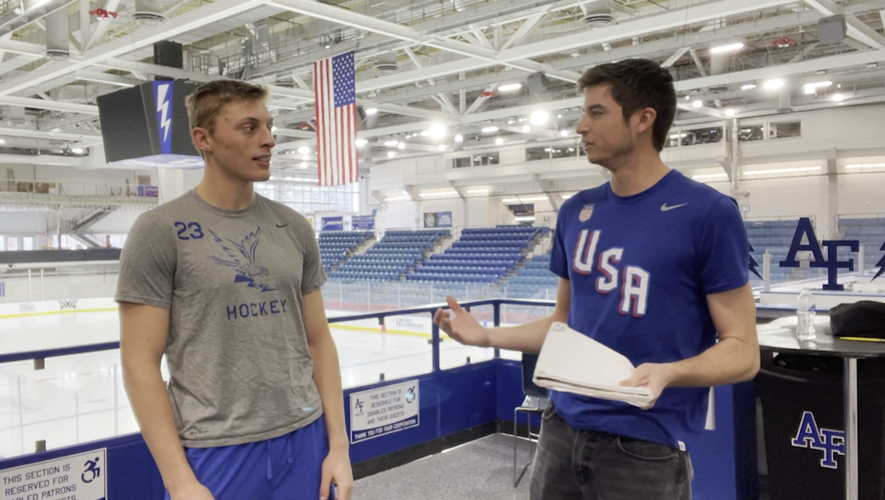 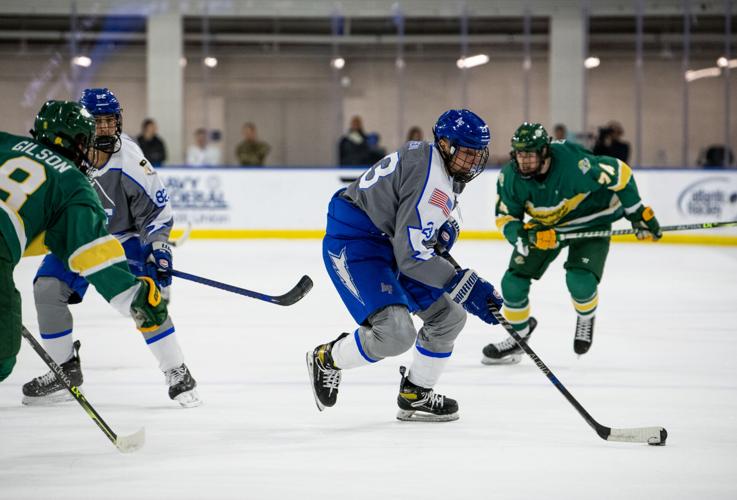 Air Force Academy men’s hockey forward Willie Reim (23) skates with the puck during the first period of a hockey game against the Alaska Anchorage Seawolf’s at Cadet Ice Arena on Saturday, Nov. 5, 2022. (The Gazette, Parker Seibold)

Air Force Academy men’s hockey forward Willie Reim (23) skates with the puck during the first period of a hockey game against the Alaska Anchorage Seawolf’s at Cadet Ice Arena on Saturday, Nov. 5, 2022. (The Gazette, Parker Seibold)

Willie Reim is one of Air Force hockey’s most experienced players.

Reim played his 100th career game last week in the Falcons’ road series against Holy Cross. The forward is fourth on the team with 13 points.

I spoke with Reim about his background, his future plans in the Air Force and his lengthy career with the program; here’s what he had to say:

How do you think growing up in Minnesota — a place where hockey’s sort of a religion — prepared you to play college hockey?

“I think it prepared me a lot. Everyone plays it, so growing up, I had all the competition in the world. Some players have gone on to the NHL, the AHL and other D1 teams. I was really lucky to play for a lot of really good teams growing up, and all the way up, it’s really prepared me.”

You played in your 100th game in last week’s series at Holy Cross. Do you have a favorite memory?

“I think there’s a few. First and foremost, the outdoor game when we were able to play at Falcon Stadium against Colorado College. When I was in high school, I got to play on a tarmac in Minnesota, so that was really cool. And freshman year, one of my first goals was against West Point, at West Point. Obviously the rivalry there, we’re going back in two weeks, there’s no better place than scoring there.”

With so many games under your belt, how do you think you’ve grown as a player and as a leader?

“A ton. I’m not recognizable if I were to look at myself freshman year. Not only really the hockey, but really just the bonds you build, whether it’s up on the hill or in basic training or different military things. Everything has aligned, and it’s really fun to look back and see how everyone’s grown.

As a senior, have you figured out which role in the Air Force you plan to take after graduating?

“We recently had our AFSC Drops, which is the job the Air Force assigns you. I was lucky enough to get contracted. My assistant coach from last year pushed me in that direction, so I’m really looking forward to it. End of February, we get our base locations, so I’ll be finding out where I'm going.”

You guys are on a nine-game losing streak right now. As one of the veterans, how do you think your leadership can spark something and help turn it around?

“It’s kind of a sad way of Air Force hockey. Every year I’ve been here, we’ve kind of gone on a stretch where we struggled to find the back of the net. But at the end of the day, the tide’s going to turn and everyone knows it. We have to just keep believing in ourselves and believing in the person next to you. Once you get over that hump, it’s kind of free sailing. That’s what happened last year. We were struggling and we were able to turn it around and we ended up in the championship game. It’s a similar script this year, and I’m glad everyone in the locker room has that mentality, and hopefully we can keep it going.”