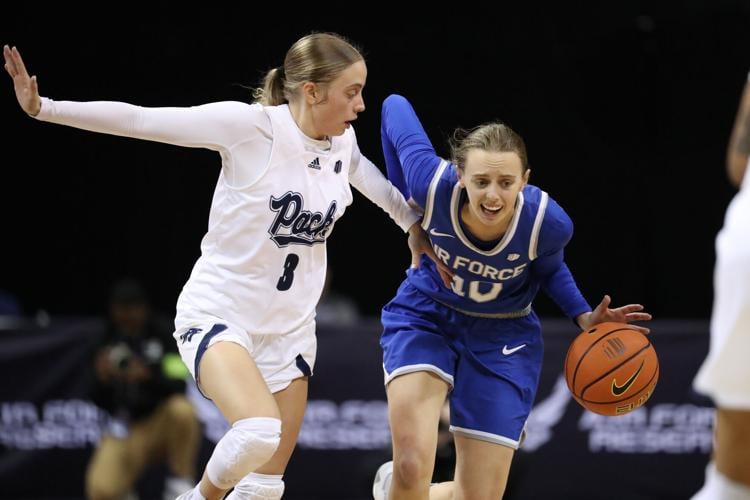 Jo Huntimer of Air Force competes March 7 at the Mountain West Men's and Women's Basketball Championship at the Thomas and Mack Center in Las Vegas. 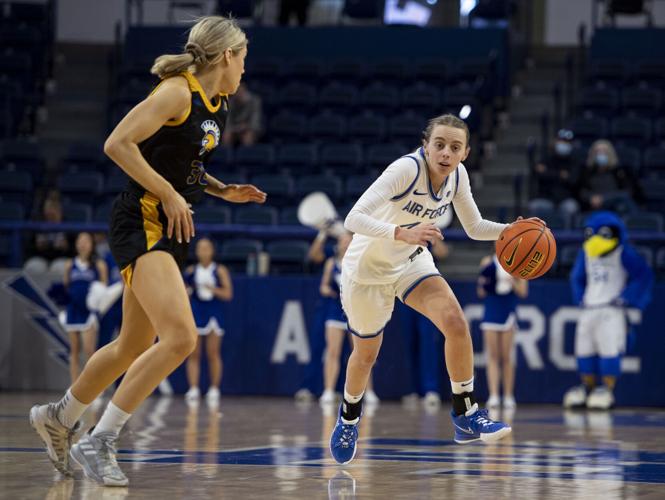 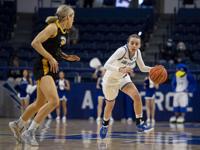 Jo Huntimer of Air Force competes March 7 at the Mountain West Men's and Women's Basketball Championship at the Thomas and Mack Center in Las Vegas.

Jo Huntimer only had one request for her family attending Friday’s game – no Navy gear allowed.

“I knew they would do something like that,” joked the sophomore Air Force point guard.

The Midshipmen women will tip off against the Falcons at 11 a.m. on Friday (Nov. 11, Veterans Day). There’s no intended symbolism to the start time –  the armistice that ended World War I became effective at 11 a.m. on Nov. 11, 1918 – as it was instead simply Air Force honoring Navy’s request for an early start.

For Huntimer, part of a Navy family, this game will be extra special.

Her father, James, is an E-9 master chief with 30 years spent in the Navy. Jo’s twin sister, Alexsandra, attends the Naval Academy and will be at the game as a manager with the Midshipmen’s team.

“Until I got to USAFA, my entire life has been Navy. So I think it’s going to be super fun,” Jo said. “It was all Navy. No Air Force. No mention of Air Force.”

Huntimer’s father will be among those in attendance on Friday.

Air Force hasn’t beaten Navy since the 2008-09 season, with the Midshipmen owning a 13-3 series edge and a nine-game winning streak.

“It just matters a little more,” coach Chris Gobrecht said of playing fellow service academies. “I think part of the reason those football games so often are knock-down, drag-out is because every single kid who steps on the field, steps on the court is just playing their brains out.

“Now, they don’t always play great; they’re just playing their brains out. Sometimes it’s hard. What you’re looking for is that balance between intensity and excitement and still being highly functional. That elusive spot in our brain that we all hunt for all the time and the great ones seem to find more often.”

Air Force (1-0) fresh off the best season in program history, is still feeling out roles after losing four key players from that squad. The Falcons defeated Denver 67-63 on the road in the season opener, overcoming a double-digit deficit.

Air Force coach Chris Gobrecht needs one more win for No. 600 in her career, and the next victory will be No. 57 with the Falcons, matching the program’s most coaching victories at the Division-I level.

She could hit those numbers Friday against Navy.

“If I was thinking about those things I probably would do some of the things I do, play some of the games I play,” said Gobrecht, whose team will play four teams from Power Five conferences this year.

Gobrecht’s career arc also shows how little she has chased numbers. After spending time at Washington, Florida State and USC, she has opted to take on rebuilds at Yale and Air Force.

“It’d be great to have it happen against Navy,” Gobrecht said. “But just beating Navy means more than anything else.”

Air Force picked a good day to have a very, very good day.