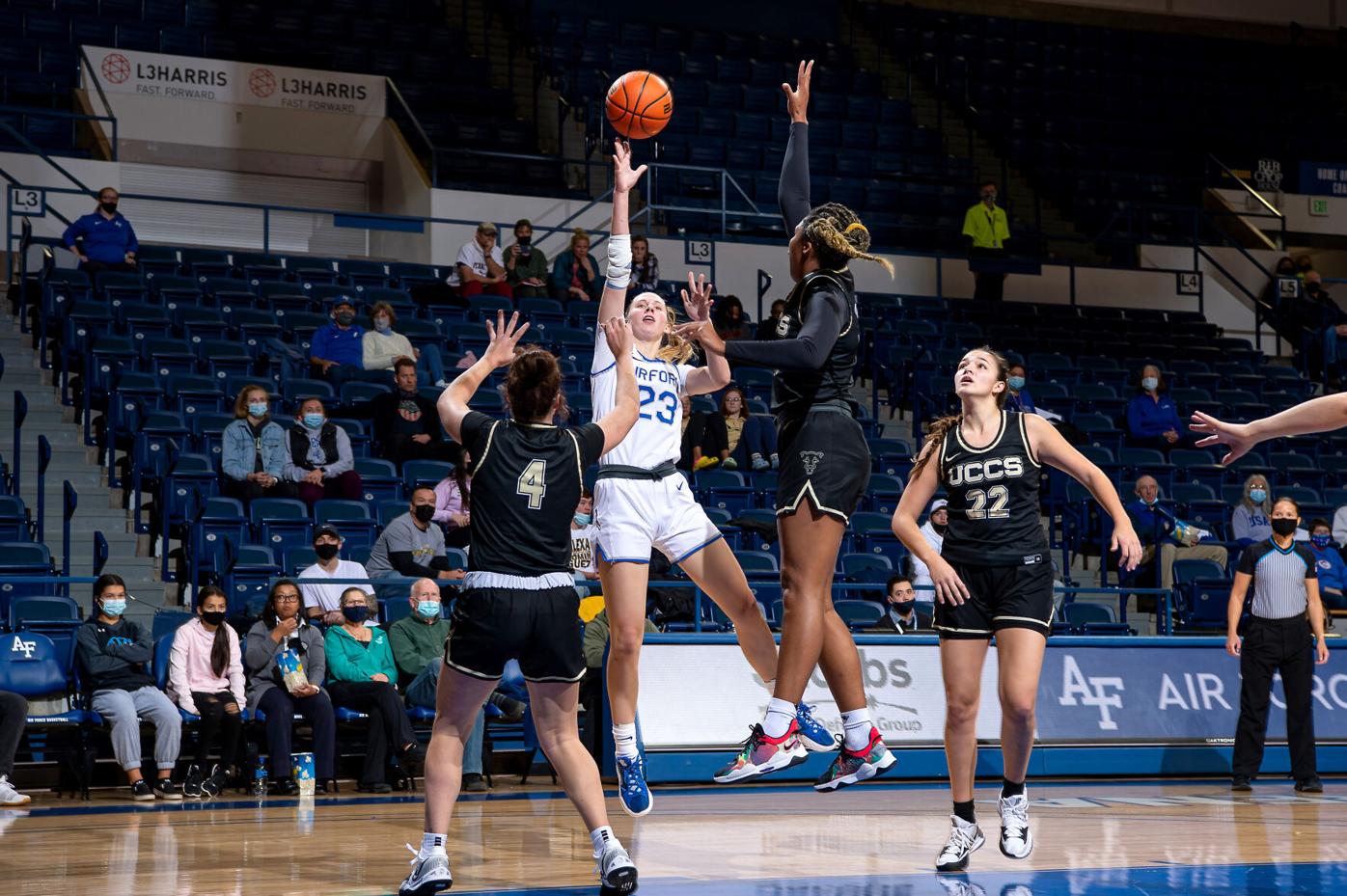 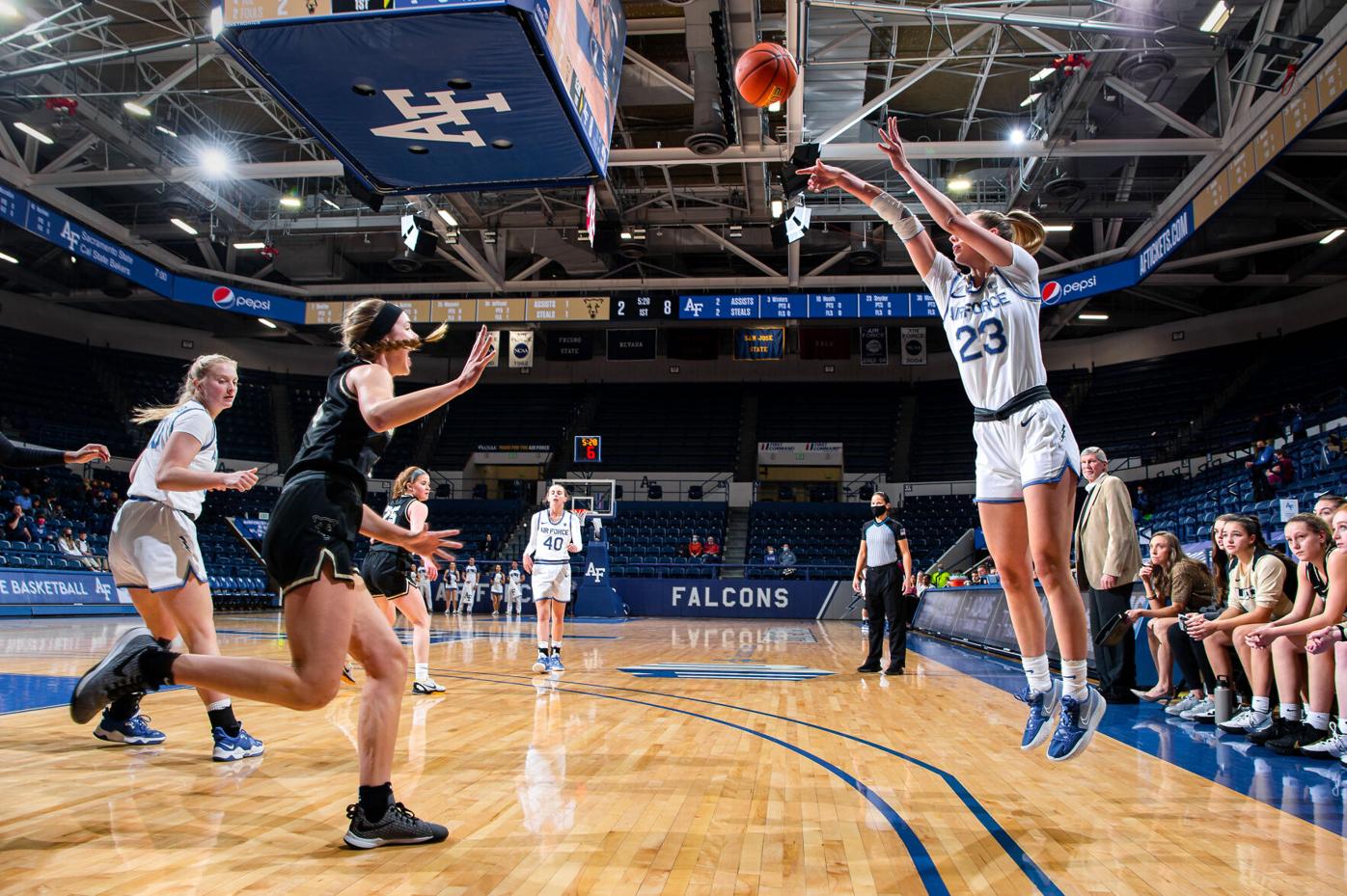 Riley Snyder shoots a 3-pointer in Air Force's 70-49 win over UCCS on Wednesday in Clue Arena. Snyder finished with 14 points. 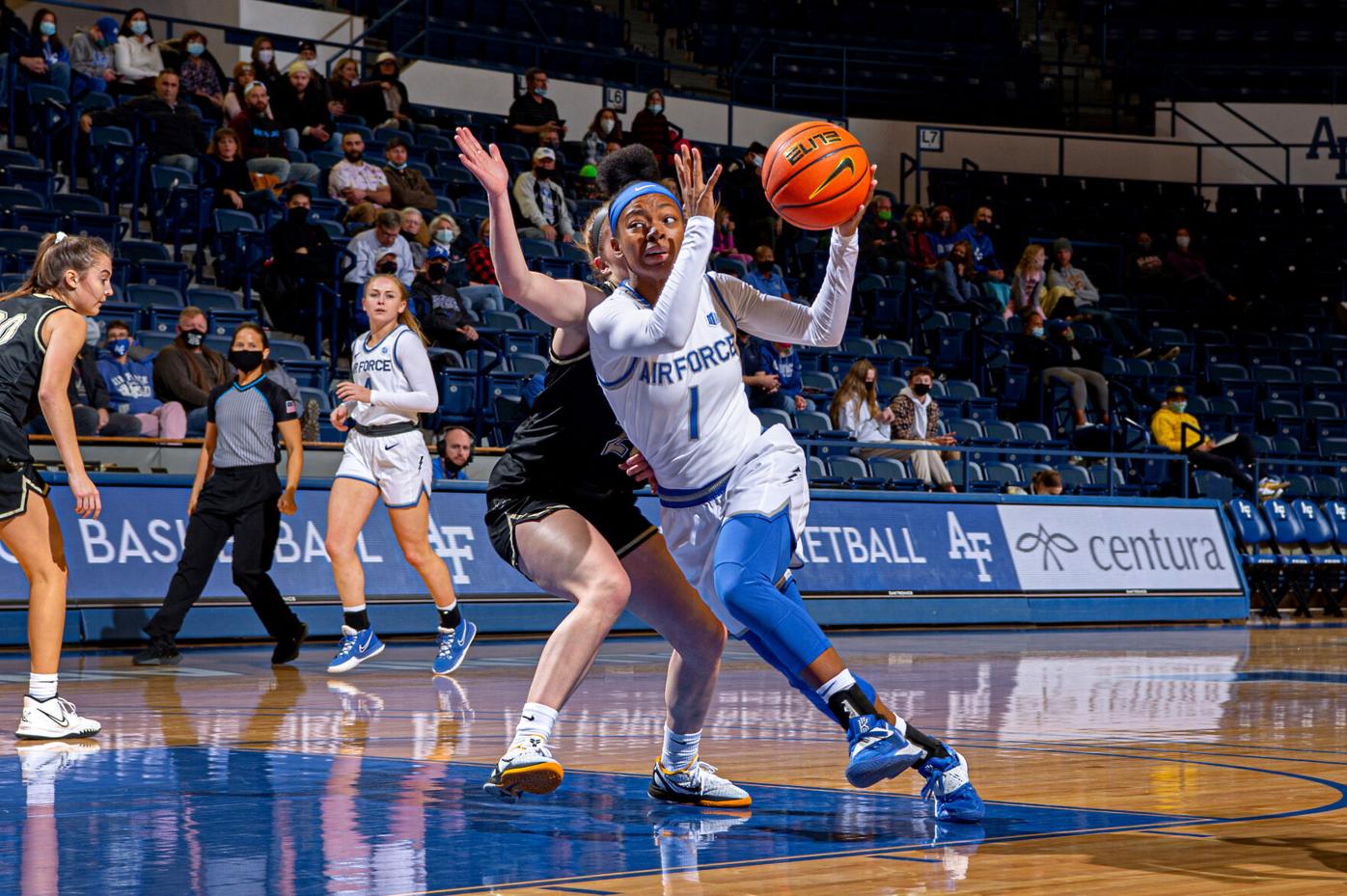 Briana Autrey-Thompson drives to the hoop for two of her 11 points in Air Force's 70-49 win over UCCS on Wednesday at Clune Arena.

Riley Snyder shoots a 3-pointer in Air Force's 70-49 win over UCCS on Wednesday in Clue Arena. Snyder finished with 14 points.

Briana Autrey-Thompson drives to the hoop for two of her 11 points in Air Force's 70-49 win over UCCS on Wednesday at Clune Arena.

Audrey Gadison catches the ball, her sapphire blue shoes positioned in the middle of the Mountain West logo — well beyond the 3-point line — and fires. The ball falls effortlessly through the hoop.

It was one of three 3-pointers the senior hit in the first half for Air Force, and part of a 47% shooting performance for the Falcons from beyond the arc.

It was a welcome site for an AFA team coming off a dismal 28% shooting night in a one-point loss to Long Beach State.

“It was great to see everyone shooting the ball well,” Cierra Winters said.

The improved shooting had an improved result, as the Falcons topped UCCS 70-49 on Wednesday at Clune Arena.

Gadison wasn’t the only one flexing her shooting muscles, as eight Falcons scored in the win. Winters led the way for Air Force with a career-high 17 points, Riley Snyder had 14, and Briana Autrey-Thompson added 11.

Winters got Air Force’s offense going, scoring two quick buckets and assisting Briana Autrey-Thompson on a third as the Falcons jumped out to a 6-0 lead.

For her second basket, Winters crossed up her defender, and executed a spin move, before shooting off the backboard for two points. Creativity was abundant in her offensive game throughout the night, scoring off step-throughs, free-throws, spins and a 3-pointer for good measure.

“We call her slippery,” Air Force coach Chris Gobrecht said with a laugh. “ She got us going there and then went to the bench with fouls. Then she was great in the second half. I don’t think she came out.”

When Winters went to the bench, it was Snyder’s turn to power the offense. She had 12 points in the first half, including her two 3-pointers.

Seeing the ball go in the hoop was a welcome sight for the Falcons, but after that, Gobrecht didn’t have much else to praise — except UCCS.

“I think our shooting was about the only good thing we did,” she said. “(UCCS) came out and fought the whole time. They didn’t give up. If they play like that in the RMAC, they are going to be tough on teams.”

The Tigers forced 21 turnovers on the game, and attacked their D-I opponent fearlessly throughout. Ellie Moore came off the bench to lead UCCS with 12 points, and the Tigers remained in striking distance for most of the first quarter.

Back-to-back 3-pointers — one from Snyder and the other from Gadison — gave Air Force it’s first double-digit lead, 19-8 with 2:33 left in the first. But UCCS stuck around, and was able to get within six with 39 seconds left in the period. Emily Doolittle lined up a 3 of her own, before AFA’s Dasha MacMillian answered with a mid-range jumper.

The Falcons lead hovered between 15 and 18 points for much of the contest, and freshman guard Jo Huntimer sealed the outcome when she knocked down a 3-pointer with 4:39 left in the third, putting her team up by 21.

UCCS is the second D-II opponent Air Force has played in the last week — the Falcons topped Regis 60-46 on Dec. 2.

Despite the lower-level competition, Gobrecht said the games are still beneficial as her team preps for conference play.

“In the preseason everything is about getting ready for that,” she said. “And we’ve had finals, so everyone is really tired, but I’m not making excuses. We’ve definitely got some things to clean up.”

Next up, Air Force travels to Dixie State on Dec. 18.