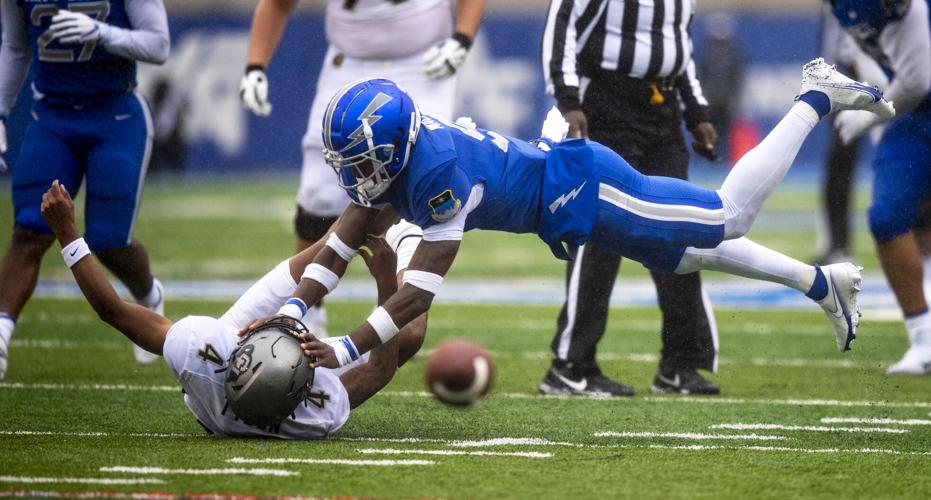 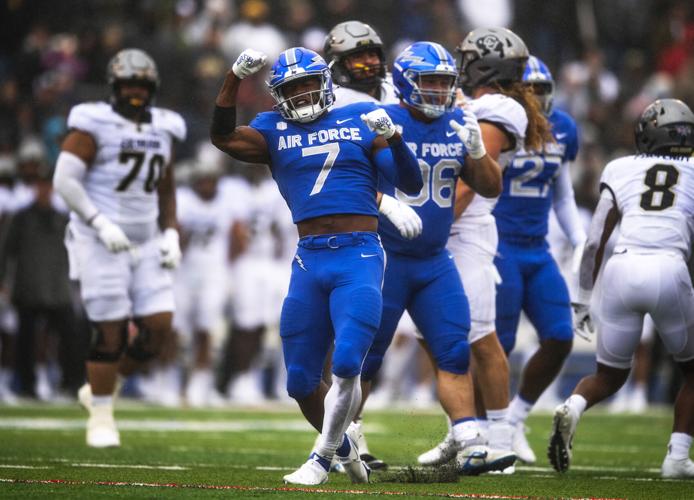 Air Force Falcons safety Trey Taylor (7) celebrates after making at tackle during the first quarter of the game against Colorado University Buffaloes at Falcon Stadium in Colorado Springs, Colo., on Saturday, Sept. 10, 2022. (The Gazette, Parker Seibold)

Air Force Falcons safety Trey Taylor (7) celebrates after making at tackle during the first quarter of the game against Colorado University Buffaloes at Falcon Stadium in Colorado Springs, Colo., on Saturday, Sept. 10, 2022. (The Gazette, Parker Seibold)

More from Air Force's 41-10 in-state victory over Colorado at Falcon Stadium on Saturday.

Air Force’s Player of the Game

Tough to single out any of them, so let’s just note what the unit accomplished. Safety Camby Goff intercepted a pass and broke up two others. Cornerback Michael Mack II had a fourth-down tackle among his team-high six tackles. Safety Jayden Goodwin delivered the game’s most devastating blow, jarring the ball loose from Colorado’s Alex Fontenot inches short of the goal-line and a touchdown that would have made the score 20-17.

As a unit, the secondary (which also consisted of safety Trey Taylor and cornerback Eian Castonguay) contributed to Colorado completing just 5-of-21 passes for 51 yards.

Every snap was handled by Michael Mack II and Eian Castonguay following the departure from the team of Corey Collins. They handled it with no problem, each breaking up a pass and helping in an effort to stymie the Colorado passing game.

Well, they had clarity. Sort of. The Buffaloes, who had split quarterback time the previous week between J.T. Shrout and Brendon Lewis and were noncommittal on a starter all week, stuck with Shrout. He threw for just 51 yards on a cold, wet day.

Zac Larrier made his season-debut for the Falcons and lined up at a spot other than quarterback for the first time. Used as a running back, the Mountain West track & field champion in the 200-meter dash gained 60 yards on six carries.

Consecutive field goals for sophomore Matthew Dapore, who hit from 54 and 47 yards on Saturday. Dapore is 12 of 14 in his career.

Rushing first downs by the Air Force, of its 25 in the game. The other came on a Colorado penalty.

Margin of victory in both games this season for Air Force: 48-17 over Northern Iowa, 41-10 over Colorado.

Rushing yards on eight carries for Air Force tailback John Lee Eldridge III, this coming after he went for 85 yards in a victory over Northern Iowa. He said after the opener his only goal was to “have his best game every game.” Mission accomplished so far.

Time of possession for Air Force, compared to 21:38 for Colorado. The Falcons ran 75 plays compared to 53 for the Buffs.

Announced attendance, a figure that would likely have been higher if not for chilly, windy and wet conditions in the stadium.

The day was miserable, and I’m not even talking about the weather.