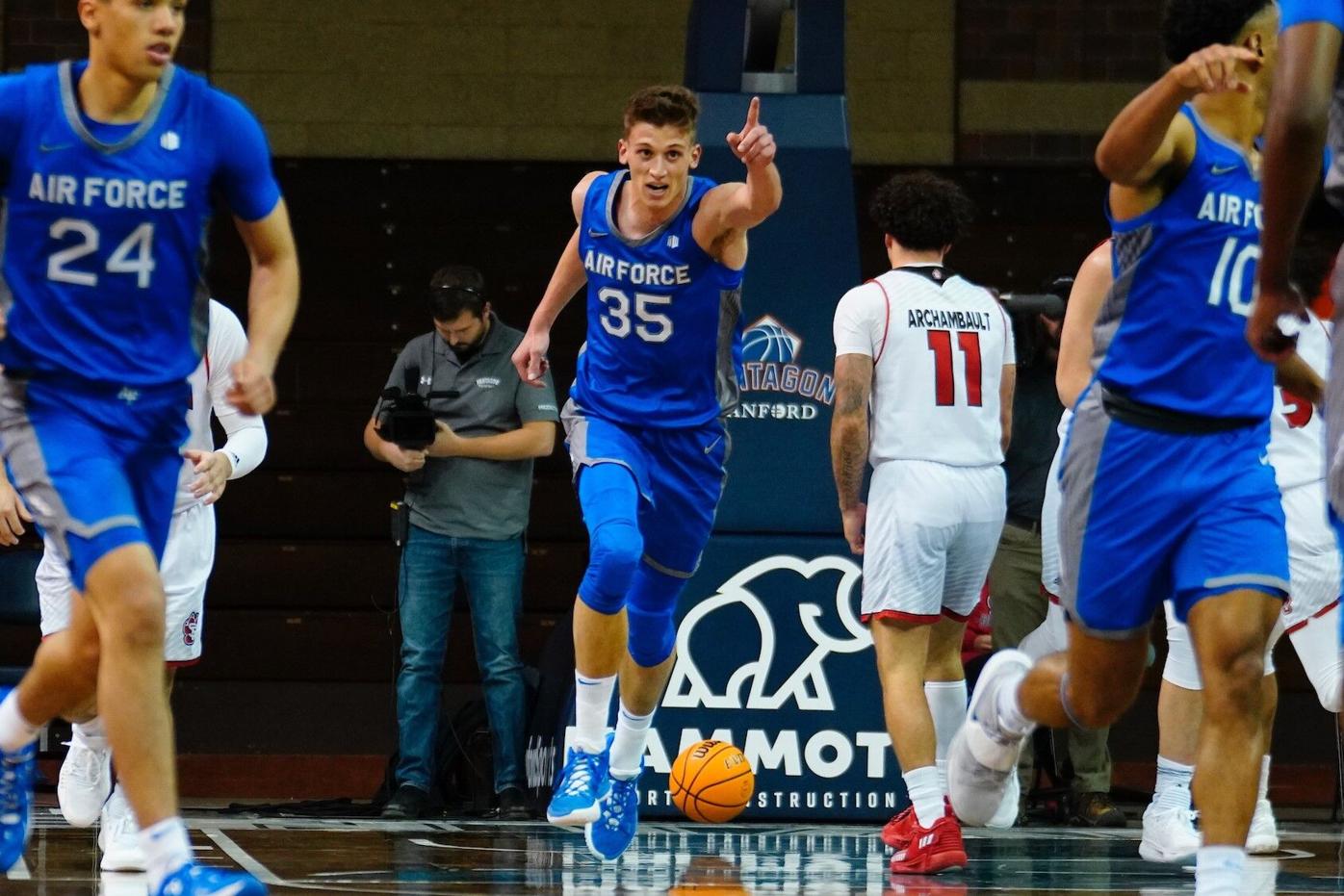 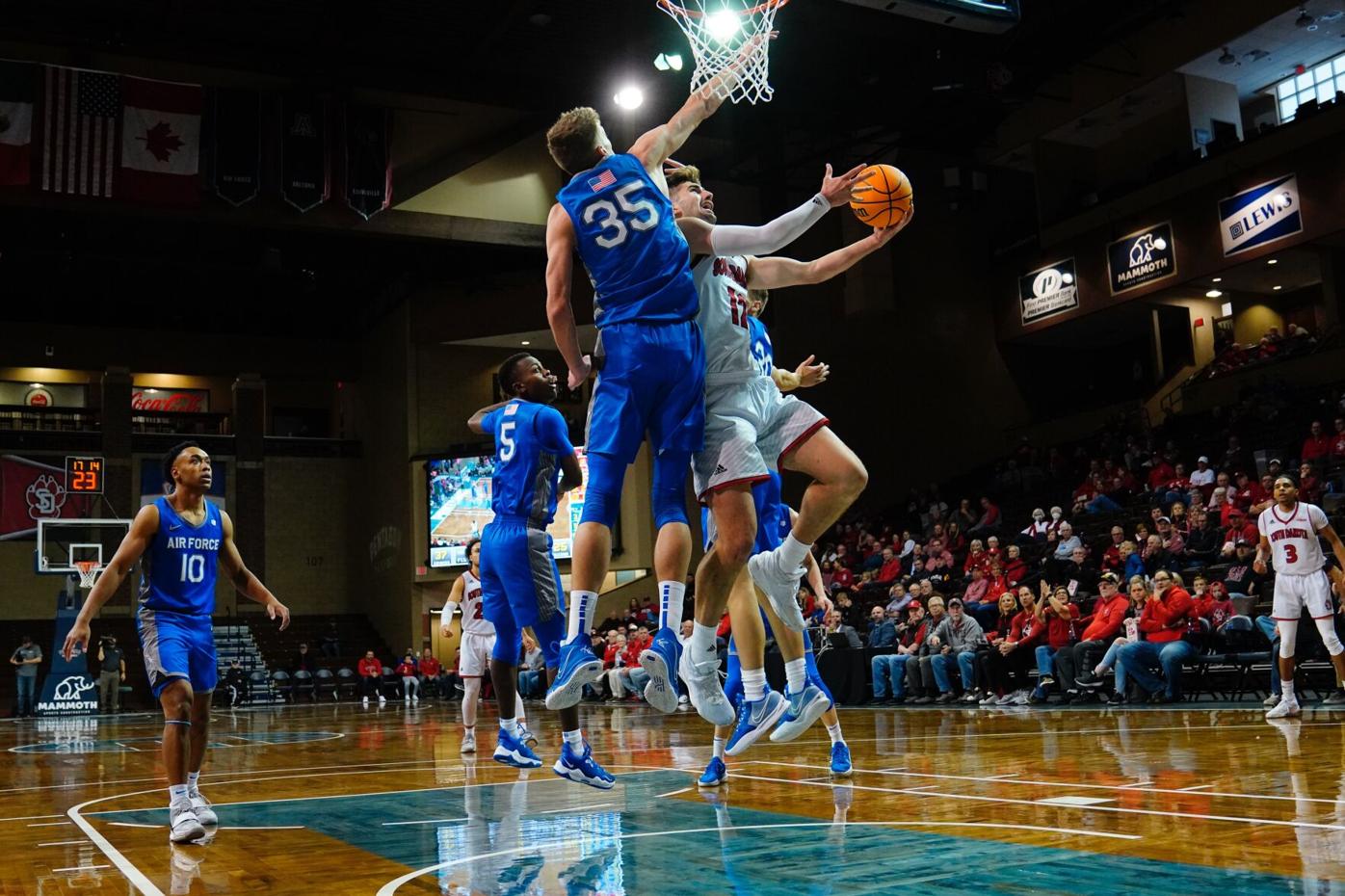 Luke Moerman’s presence will be seen every time his Air Force teammates attempt a contested layup.

Among the many advantages of having the 6-foot-10 freshmen on the team is he's there in practice everyday mimicking the challenge the Falcons otherwise would face only in games.

In Moerman, there’s now a big guy in the middle for Air Force.

Last year the tallest Falcon to see regular action was 6-8 Nikc Jackson. In the years before that, 6-8 Ryan Swan held the position. The last Falcon taller than 6-10 to see regular time was Zach Moer from the class of 2016. Moer had flashes of promise, but he never grabbed more than eight rebounds in a game and averaged 8.6 points as a senior.

Moerman, who has worked to add about 15 pounds to his frame since high school, already has grown out of the skinny look so often seen from young Air Force big men.

Moerman established himself immediately during Thursday’s season-opening 59-53 loss against South Dakota, scoring nine points with nine rebounds in his collegiate debut. The Colorado Springs native also blocked a shot and knocked down 4-of-5 field goal attempts.

By efficiency rating, Moerman and fellow freshman Ethan Taylor were at 16 for the game. No other Falcons registered above 7.

“Luke’s awesome,” Walker said. “I love playing with him. He’s high energy. He can take in any coaching. He’s just a good person to be around. He’s also a really good basketball player. Luke’s just the right person in the right time.”

Moerman averaged 15 points, 11 rebounds and six blocks as a senior at Doherty, earning Colorado Springs 5A Metro League Player of the Year. He then spent a year at the prep school and revised his shot that had featured a release point over and behind his head. Now he has a more traditional stroke from in front of his face.

“He’s gotten so much better,” coach Joe Scott said. “I’m putting him out there because he’s 6-10, he runs like a deer – he could be the fastest one on the team. He’s really long. He jumps. He’s active. He works extremely hard. You take a 6-10 kid and you say what I just said about him and he listens and he works hard; those guys get better.”

The center position, so often a relative weakness for Air Force, saw Moerman and Jackson combine for 20 points, 11 rebounds, two blocks and a steal on Thursday. Add that to the proven Walker, who is playing the No. 2 guard spot and Taylor, who looks like an instant standout as a 6-5 point guard, and the makings of a solid lineup are quickly taking shape for Scott’s team.

They’ll be back at it at 11 a.m. Saturday at Tulsa as part of the Sunshine Slam. The game will be broadcast on ESPN+ and carried by 740 AM KVOR.

“When you’re putting in all that work, you don’t see the rewards very much,” Moerman said. “You’re just grinding and seeing what all these other kids are doing and you’re kind of missing out. Now it’s really coming to me and, like, I’m getting the experience I really hoped for.

“It’s a childhood-dreams-coming-true kind of thing.”

Air Force’s comeback attempt fell short, but the first chapter in this new era for the basketball program presented plenty of hope.