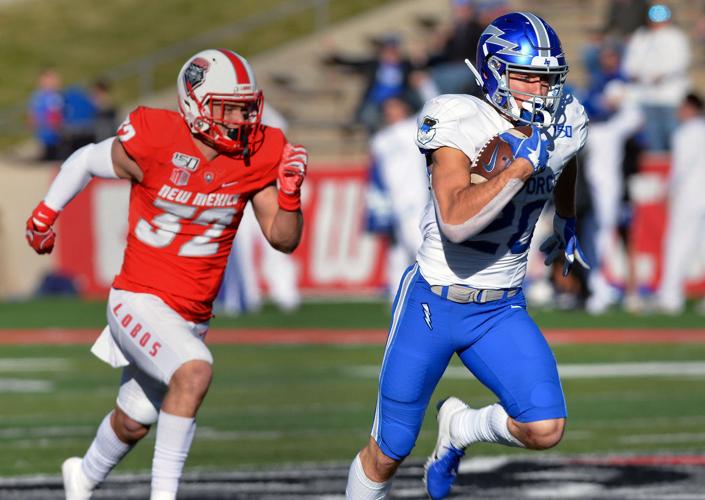 Airforce2/sports/jim thompson/ Air Force's #20 Benjamin Waters leaves UNM's #32 Johnny Hernandez in the dust as he heads towards the end zone for the score in the second half of their game Saturday afternoon as the Falcons beat the Lobos 44-22 in Albuquerque, NM. Saturday, Nov. 23, 2019. (Jim Thompson/Albuquerque Journal) 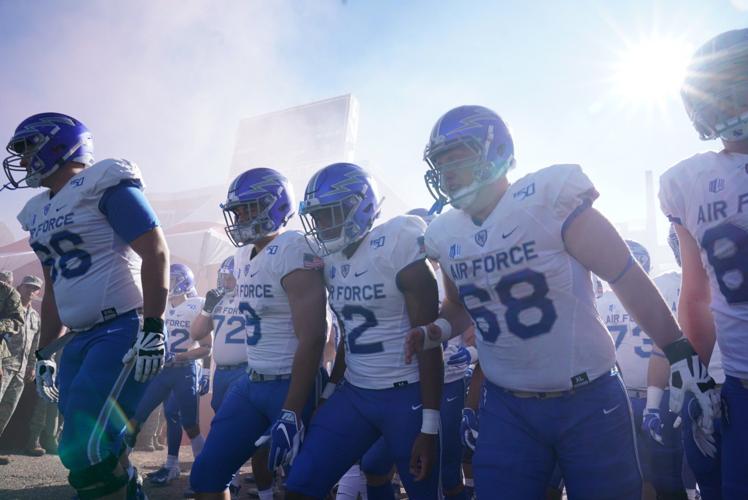 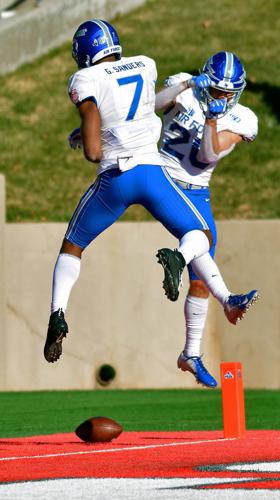 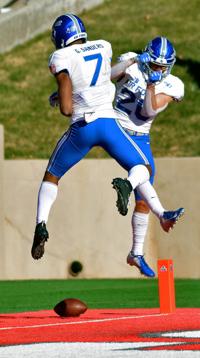 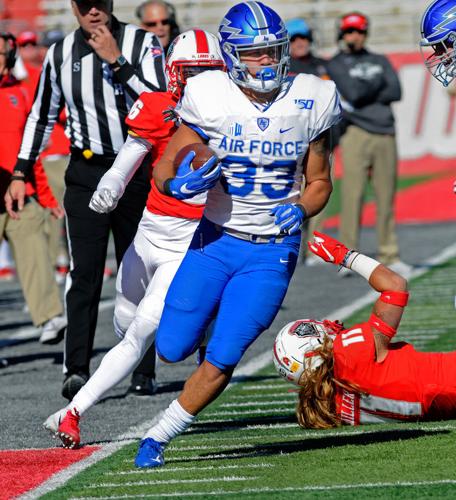 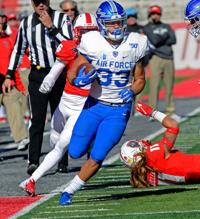 Airforce1/sports/jim thompson/ Air Force's #33 Taven Birdow leaves UNM players in his wake as he heads towards the end zone in their game Saturday afternoon as the Falcons beat the Lobos 44-22 in Albuquerque, NM. Saturday, Nov. 23, 2019. (Jim Thompson/Albuquerque Journal)

Airforce2/sports/jim thompson/ Air Force's #20 Benjamin Waters leaves UNM's #32 Johnny Hernandez in the dust as he heads towards the end zone for the score in the second half of their game Saturday afternoon as the Falcons beat the Lobos 44-22 in Albuquerque, NM. Saturday, Nov. 23, 2019. (Jim Thompson/Albuquerque Journal)

Airforce1/sports/jim thompson/ Air Force's #33 Taven Birdow leaves UNM players in his wake as he heads towards the end zone in their game Saturday afternoon as the Falcons beat the Lobos 44-22 in Albuquerque, NM. Saturday, Nov. 23, 2019. (Jim Thompson/Albuquerque Journal)

ALBUQUERQUE – Donald Hammond III didn’t want to spend too much time thinking about the scope of his performance.

“It’s special,” the Air Force junior said after posting the best passing game the program has had from a quarterback since adopting the option offense nearly four decades ago. “But you’ve got to go in tomorrow, get back to work.”

Hammond completed 9 of 10 passes for 327 yards and four touchdowns as Air Force raced past New Mexico 44-22 on Saturday. He also ran 11 times for 41 yards and a touchdown as the Falcons (9-2, 6-1 Mountain West) won their sixth straight.

His passing yards were the fifth-most in single-game program history, and the most since Dave Ziebart’s 339 in 1976. The touchdown passes put him into a five-way tie with Shaun Carney, Rich Haynie, Paul Stein and Mike Thiessen (who was calling the plays as offensive coordinator Saturday) for second most. The 90% completion percentage has been topped only by Dee Dowis in 1988 (11 of 11 vs. Northwestern) and Rich Mayo in 1959 (10 of 11 vs. Arizona).

“We’re not given many (passes), just because of our offense, and that’s totally fine,” Sanders said. “But we love when our name is called on, and we want to go make the best of the opportunity every time.”

Fullback Taven Birdow also ran for 110 yards and a touchdown on this prolific offensive day that saw the Falcons outgain New Mexico 540-358.

“I noticed once I started breaking through, the passing lanes opened,” said Birdow, whose role increased when sophomore Timothy (Duval) Jackson left with an injury that had him in a walking boot on his left foot after the game. “It works pretty well. It’s a machine.”

And as lopsided as the score turned out — Air Force led 44-16 before New Mexico scored against the second-team defense in the final 2 minutes — the Falcons needed every bit of that offense.

“The offense really put us in the backpack tonight and carried us,” said linebacker Demonte Meeks, who made a career-high 14 tackles.

The Lobos scored the game’s first touchdown and they lined up for a PAT with 5:25 remaining in the third quarter that would have brought them within four points.

Instead, the kick was blocked, deflecting off a New Mexico player’s helmet, and scooped up by Milton Bugg III and returned for two points.

The Falcons then scored three straight touchdowns to send the Lobos (2-9, 0-7) to their seventh consecutive loss.

But in a game full of noteworthy, first-time-since statistics, it was the passing game that stood out.

“Whenever you go into a game as an Air Force Falcon you never think you’re going to throw it (that much),” said Waters, whose 182 receiving yards were the 10th most for a Falcon in team history and most since Jalen Robinette’s 186 vs. New Mexico in 2016. “But that was unreal. That was fun.”

“Every one of his throws was on the dot. He was getting great protection, our o-line was playing unreal. It was a combination of efficiency, his arm and our o-line.”

After the game, coach Bob Davie lamented a number of injuries that have occurred for the Lobos, including one to quarterback Tevaka Tuioti during the game. New Mexico also misfired on a couple of opportunities for big passing gains and had an on-the-field fumble call against Hammond overturned, as that turned out to be his lone incomplete pass.

“We left some opportunities out there … We hung in there and fought, but we couldn’t stop the pass. That’s what it was,” Davie said. “This is the best Air Force team that I’ve seen since I’ve been at New Mexico.”

Or, as Hammond succinctly summed up his historic day, “Our guys ran the routes and I put the ball where it needed to be.”