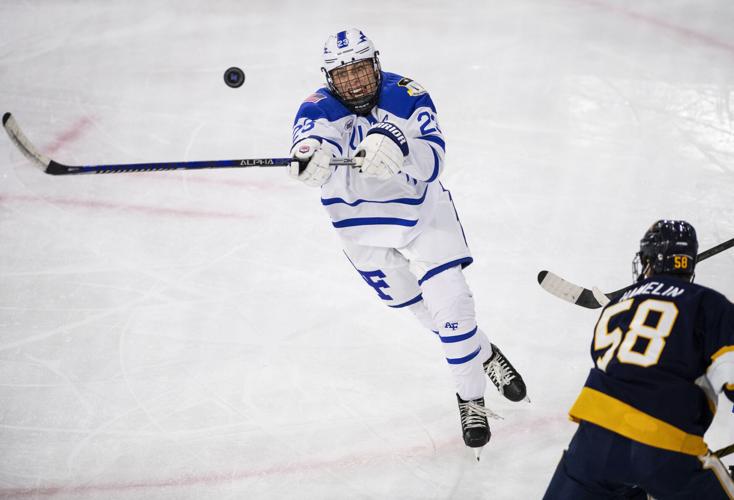 Falcons right wing forward Willie Reim raises his stick at the airborne puck during a Dec. 3 game in Colorado Springs. 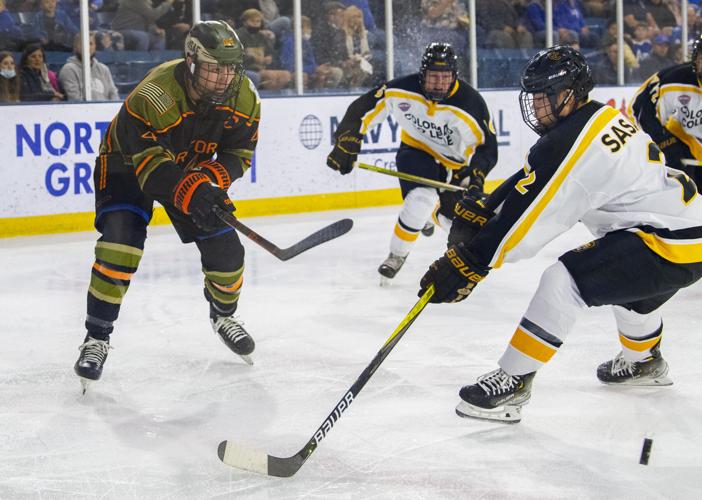 Falcons right wing forward Willie Reim raises his stick at the airborne puck during a Dec. 3 game in Colorado Springs.

In his four years at Air Force, senior forward Willie Reim said the attitude in the Falcons’ current locker room is the most positive it has been.

“It’s a really good atmosphere,” Reim said. “We have almost everyone back, and we’ll be able to take some chances this year.”

There’s good reason for this positivity.

After finishing sixth in the Atlantic Hockey Association (AHA) regular season standings, the Falcons made a run to the AHA championship game in 2021-22. From mid-January to their final on March 19, Air Force went 11-5-1.

“That’s typically our MO: playing our best hockey late in the season and being the team that time of year that nobody wants to play,” said associate coach Joe Doyle, who spoke at Wednesday’s CC vs. AFA Slap Shot Social instead of head coach Frank Serratore, who was ill. “We do think that’s going to lead to some momentum this year.”

Doyle, however, doesn’t want the Falcons to be overconfident after last year’s strong finish.

Air Force will face several tough opponents in the first few weeks of the season, including No. 9 Notre Dame, Maine and Colorado College, as well as its first conference series against Rochester Institute of Technology.

“We’re starting from ground zero right now,” Doyle said. “What we can’t do is think just because we finished strong last year that it’s going to start this year. But if they have the youthful enthusiasm that they had last year, the edge of their seat mentality, we have a chance to be pretty good early on.”

Doyle cited defense as one of the Falcons’ strengths. With Luke Rowe, Brandon Koch, Sam Brennan, Mitchell Digby and others all returning, the Falcons’ defense corps has a chance to be one of the strongest in the NCAA.

“Our defense is super willing,” Rowe said. “We’re willing to block guys, finish checks and take hits just to make the play. All of our defensemen, across the board, are fantastic players.”

Doyle added, “I think we probably have the best D-corps, on paper, that we’ve ever had.

Air Force also brings in a strong attack, returning 100% of the scoring from last year’s team, which finished 16-17-3 overall.

Reim noted size and physicality as some of the Falcons’ offensive strengths.

“We can throw our bodies around, take it to the net and hopefully capitalize a little bit,” he said.

Air Force graduated just one senior after the 2021-22 season, and that was goaltender Alex Schilling, who played in 34 of Air Force’s 36 games.

With Schilling gone, Doyle said sophomore Guy Blessing is the “leader in the clubhouse.” Blessing played in seven games as a freshman, starting in two.

Others in the mix will be Austin Park, Aaron Randazzo and Maiszon Balboa.

The Falcons begin the regular season on Oct. 7 against Maine as part of the Ice Breaker Challenge, hosted at Cadet Ice Arena.

But before that, they will face Colorado College in an exhibition game at the Air Force Academy Saturday. Because Air Force and CC share the same city, Doyle said the exhibition will likely be more "fierce" than a traditional scrimmage.

Doyle sees it as an opportunity for the Falcons to analyze their strengths and weaknesses before the games start to count.

“They’re such a talented, fast, well-coached team, so it’ll give us a chance to play a really good opponent,” Doyle said. “They will expose some things in our game that we can then go back to the drawing board and look at before the Ice Breaker.”

Quick notes on the Falcons

Air Force football will serve two years on probation but not face a post-season ban, the NCAA announced on Thursday.