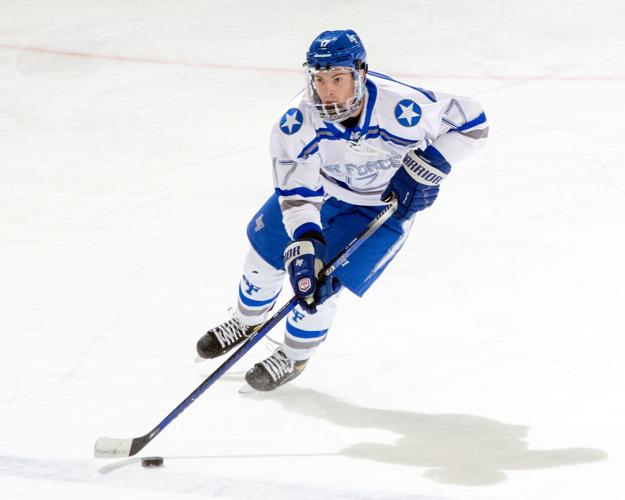 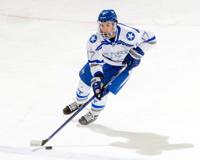 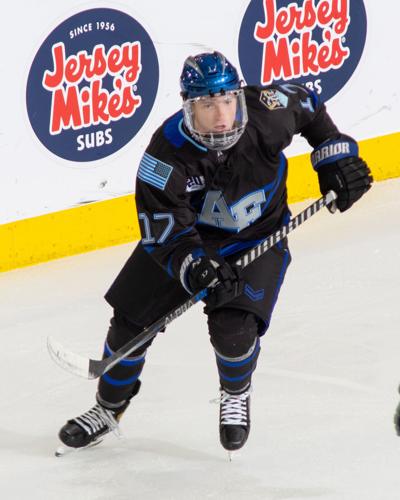 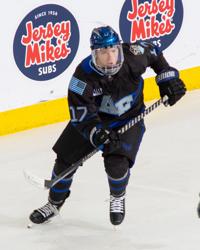 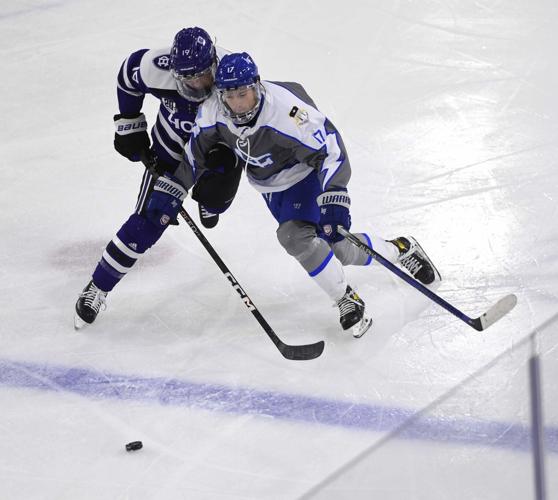 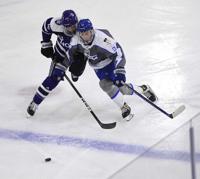 Air Force's Parker Brown scrambles for a puck next to Holy Cross' Alex Peterson on Saturday. 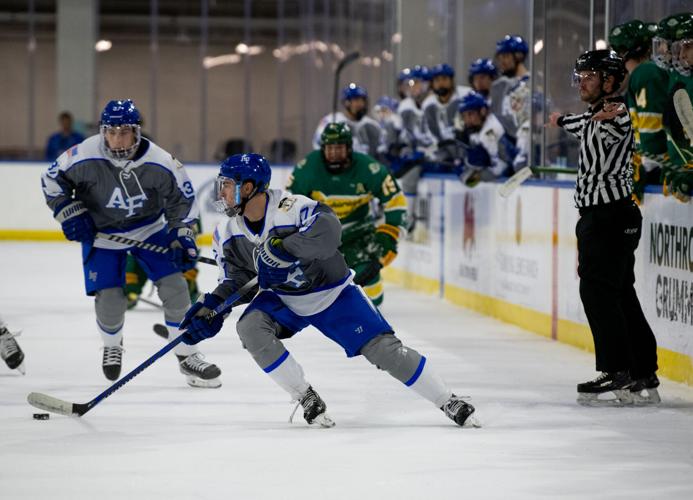 Air Force forward Parker Brown skates up the ice during a Nov. 5 game against Alaska Anchorage at Cadet Ice Arena in Colorado Springs.

Air Force's Parker Brown scrambles for a puck next to Holy Cross' Alex Peterson on Saturday.

Air Force forward Parker Brown skates up the ice during a Nov. 5 game against Alaska Anchorage at Cadet Ice Arena in Colorado Springs.

Parker Brown’s journey to becoming one of Air Force hockey’s most reliable players didn’t come without its roadblocks.

A junior forward, Brown is tied for sixth on the team with nine points. He has scored four goals and logged five assists this year alone.

Rewind a couple years, though, and Brown’s future at the Academy — and on the ice — was in jeopardy. Issues in the classroom and away from the ice nearly led to his expulsion from Air Force.

Brown, however, wouldn’t trade those struggles for anything. They allowed him to mature as a student, an athlete and a leader.

Brown admitted he didn’t have too many hardships growing up.

A native of Hanahan, South Carolina, Brown posted a 4.0 GPA throughout high school. And Brown’s youth and junior hockey career took him to Maine, Pennsylvania and Alaska, all places where he excelled.

Things became more difficult when he enrolled at Air Force.

Brown struggled mightily in his classes as a freshman, posting a 0.43 GPA and being placed on academic probation. He also got punished for an off-the-ice incident, putting him on disciplinary probation.

After no real struggles early in his life, Brown’s first few months in Colorado Springs were an eye-opener.

“I had to actually push myself to endure difficulty and new challenges,” Brown said. “Everything came easy growing up: School was easy, and I never worried about making any of my hockey teams.”

On the academic side, Brown had to stand before the Academic Review Committees (ARC) to plead why he shouldn’t be forced to disenroll. In addition to giving a speech before the ARC, Brown had to collect multiple letters of recommendation from professors and other leaders at the Academy.

Disciplinary wise, Brown couldn’t leave base for sixth months and was not allowed to wear civilian clothes in public.

And on the rink, Brown wasn’t allowed to play for his entire freshman year.

With so many roadblocks on the horizon, it would have been easy for Brown to give up. But those closest him convinced him to steer around them.

“I honestly think my parents played the biggest role in that,” Brown said. “They felt and I felt that I owed it to the Academy, the coaches and all the guys to give it a full year.

“After a year of being kind of miserable, I realized it was best for me.”

In his first year of college hockey — the 2021-22 season — Brown tied for sixth on the team with 19 points, helping Air Force win 11 of its final 16 games. This year, Brown has continued to produce at a similar pace, making his presence known on both sides of the ice.

Another aspect about Brown’s game that stands out is how he plays bigger than his size. Despite his 5-foot-10, 158-pound frame — much smaller than the average hockey player — Brown led Air Force with 65 hits last season.

That mark was third overall in the Atlantic Hockey Association. Brown was the only player under 190 pounds in the top five.

In just a couple of years, learned lessons have allowed Brown to not only be an offensive, defensive and physical leader, but a vocal leader, too.

“The leadership that we have as coaches and holding each other accountable as players speaks volumes on how you grow as a person every day and the work ethic you have to put in,” Brown said.

Brown’s growth has also made a good impression on his coaches and teammates.

Serratore described him as one of the team’s “most complete players.” The coach also cited his maturity for not only sticking with the program, but excelling in it.

“It would have been easy to walk away,” Serratore said. “Took a lot of substance and maturity and growth to dig in. He’s a better man for persevering.”

Not only has Brown seen success on the ice, he’s fixed his grades.

Brown’s current GPA is 2.82 — almost 2.50 points higher than it was his freshman year. After nearly flunking out, Brown is an above-average student at a United States service academy.

“I grinded for that,” Brown said.

Brown hasn't decided which role in the Air Force he wants to pursue.

He mentioned being a pilot or joining the United States Space Force as possibilities. And with his improved grades and discipline, Brown believes he is capable of fulfilling those aspirations.

But that’s in the long term.

Before that, Brown has goals for himself as a hockey player and for his team.

The Falcons are 6-12-2 overall and have lost seven games in a row. They wouldn’t be in the AHA Tournament if the season ended today.

Air Force is in a tough spot, but Brown’s used to clearing hurdles. The junior plans to use his personal growth to help the Falcons turn around their season.

“He was so low he had to look up to see the bottom,” Serratore said. “I couldn’t be more proud of that kid.”

Falcons fall 5-1 to No. 6 Boston to open Desert Hockey Classic

Air Force opened the Desert Hockey Classic with a loss on Friday, falling 5-1 to No. 6 Boston University.