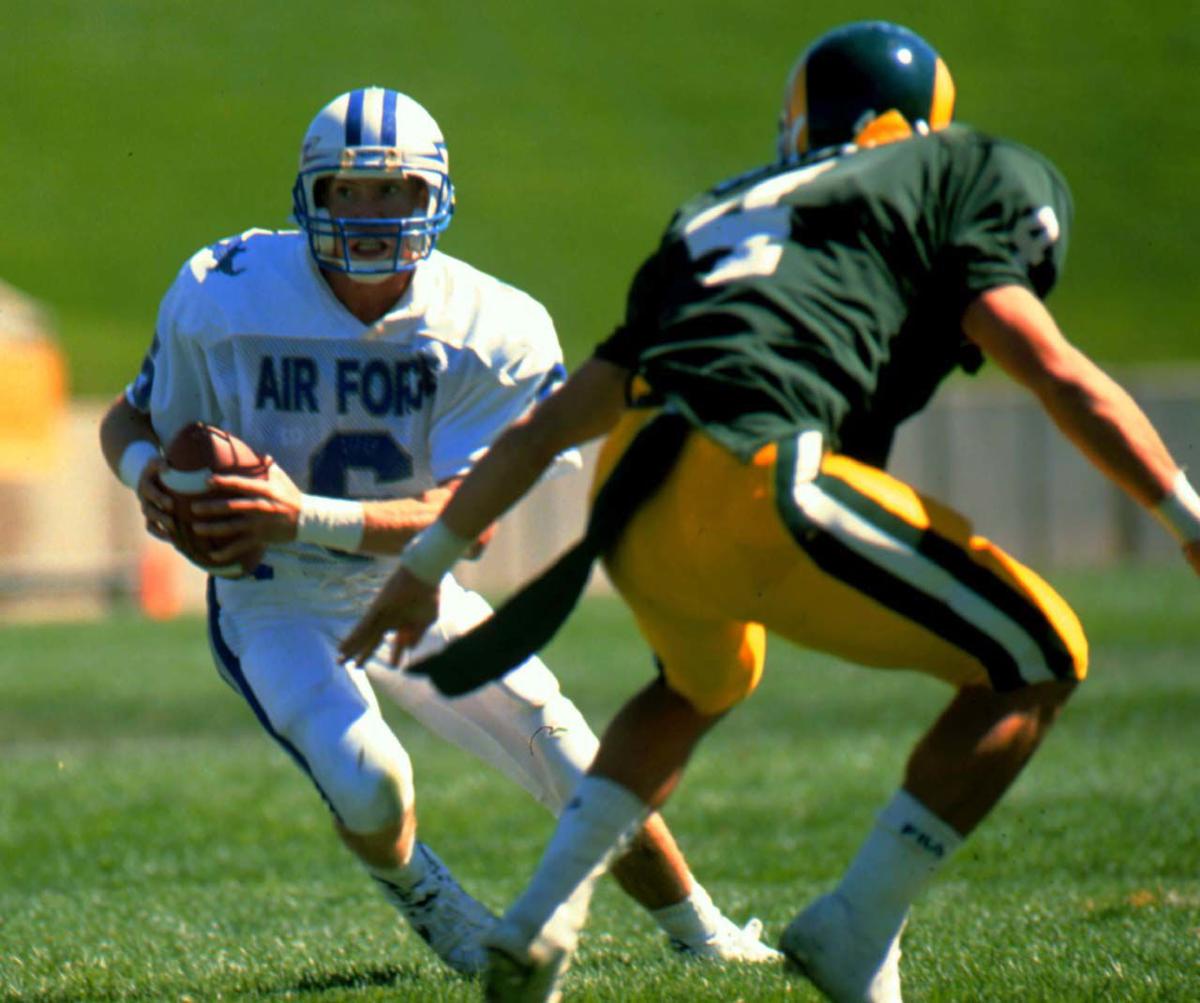 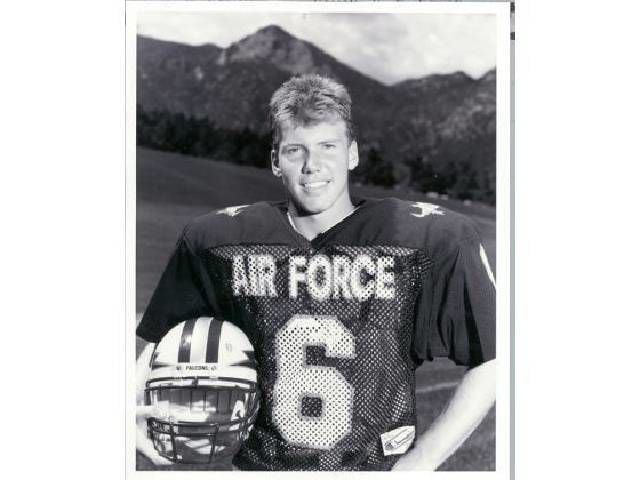 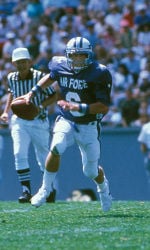 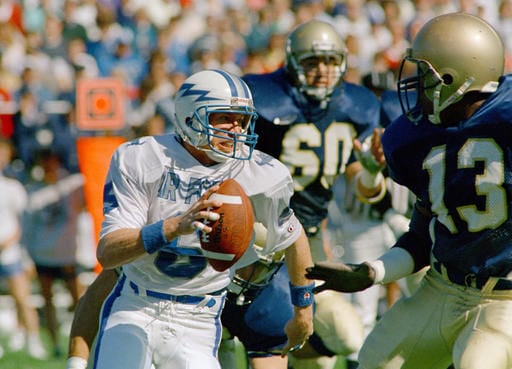 FILE - In this Oct. 7, 1989, file photo, Air Force quarterback Dee Dowis looks for running room against the defense of Naval Academy defensive back Rodney Brown during a college football game at Memorial Stadium in Annapolis, Md. Dowis, who finished sixth in the Heisman Trophy voting in 1989, died in a car accident outside Atlanta on Monday morning, Aug. 29, 2016, police in Gwinnett County, Georgia, confirmed. He was 48. (AP Photo/File)

FILE - In this Oct. 7, 1989, file photo, Air Force quarterback Dee Dowis looks for running room against the defense of Naval Academy defensive back Rodney Brown during a college football game at Memorial Stadium in Annapolis, Md. Dowis, who finished sixth in the Heisman Trophy voting in 1989, died in a car accident outside Atlanta on Monday morning, Aug. 29, 2016, police in Gwinnett County, Georgia, confirmed. He was 48. (AP Photo/File)

Dee Dowis, whose mastery of the Air Force Academy’s option offense made him a Heisman Trophy finalist, died early Monday morning in a crash near Atlanta.

The Gwinnett County Police department confirmed the death of Dowis, 48, with The Gazette on Tuesday morning. The traffic crash happened on Interstate 85 in north Gwinnett County just before 5 a.m.

“I don’t have adequate words to describe what a personal loss this is for me,” former Air Force Academy coach Fisher DeBerry said from his South Carolina home Monday night. “It’s a sad day for Falcon football. I’m sure so many people who enjoyed watching him play feel as empty as I do today.”

Dowis arrived at Air Force as a lightly recruited 5-foot-10, 150-pound quarterback in 1986, but became the starter in DeBerry’s offense as a sophomore and began setting records immediately.

He remains Air Force’s all-time leading rusher with 3,612 yards. He left college football with the rushing mark for a quarterback that held for 12 years until it was broken by Indiana’s Antwaan Randle El. Dowis' sixth-place finish in the 1989 Heisman Trophy vote after he became the fifth player in NCAA history to rush and pass for 1,000 yards in a season was the best in Falcons history and made him one of three service academy players to place that high since Navy’s Roger Staubach won the trophy in 1963.

“He was the most electric, dynamic and exciting football player probably in the history of service academy football, ever. And yet a better person,” said Air Force coach Troy Calhoun, who played with Dowis at the academy. “You just knew he was going to be quite, quite accomplished no matter what he did. Hands down the nicest and most humble human being, period.”

Dowis, who lived in South Carolina and worked as a pharmaceutical representative for Pfizer, is survived by his wife, Tracie, daughter Maddie, who attends college in South Carolina, and son Grant, who is in high school.

“I am shocked. So saddened. My heart’s broken,” DeBerry said. “It bleeds for Tracie and Madeline and Grant, Dee’s mother and family and for all our Falcon brothers. What a legacy he leaves for all of us and what it means to be a wonderful husband, devoted father, a Christian businessman and leader like he was. But he has secured his eternal home and one day we’ll be able to relive a lot of those Falcons days that we all had together.”

Word of Dowis’ death spread around the academy late Monday afternoon, but the news was not confirmed with authorities in Georgia until they contacted The Gazette on Tuesday.

The Atlanta Journal-Constitution reported that Dowis was traveling south in the northbound lanes of I-85 at about 4:48 a.m. when he pulled into the center median and began to back up his 2014 BMW. As the BMW was backing from the center median, it was struck by a northbound vehicle on the driver’s side door.

Dowis was not wearing a seat belt, police said, and was declared dead at the scene. Police do not believe speed was a factor.

The driver of the other vehicle, Jeremy Weiss, 22, of Raleigh, N.C., was treated at a nearby hospital, the Journal-Constitution reported.

The Gwinnett County medical examiner's office also confirmed the death with The Gazette, saying it was the result of a traffic crash. An official cause of death has not been determined.

“He was my first coach when I got here,” said Air Force offensive coordinator Mike Thiessen, also a former Falcons quarterback. “Dee was the one who fought for me to be a guy worth investing in. He was my personal coach my whole first year or two I was here. You talk about being able to learn from the right one. I don’t know if anyone would argue the fact that he was the greatest Air Force quarterback – maybe the greatest player.”

When DeBerry was told of Dowis' death he said he had to pull to the side of the road for 15 minutes. DeBerry said he later spent the day crying on the phone with former players and reminiscing about Dowis, who he saw three weeks ago at a charity event.

“Pound for pound, he was one of the greatest, most gifted and talented players to have played the college game,” DeBerry said. “Everybody in America had so much respect for him. And as great a player as he was, he was even a greater friend. His life never was about himself. All he wanted in life was to give back. This is just so tragic.”