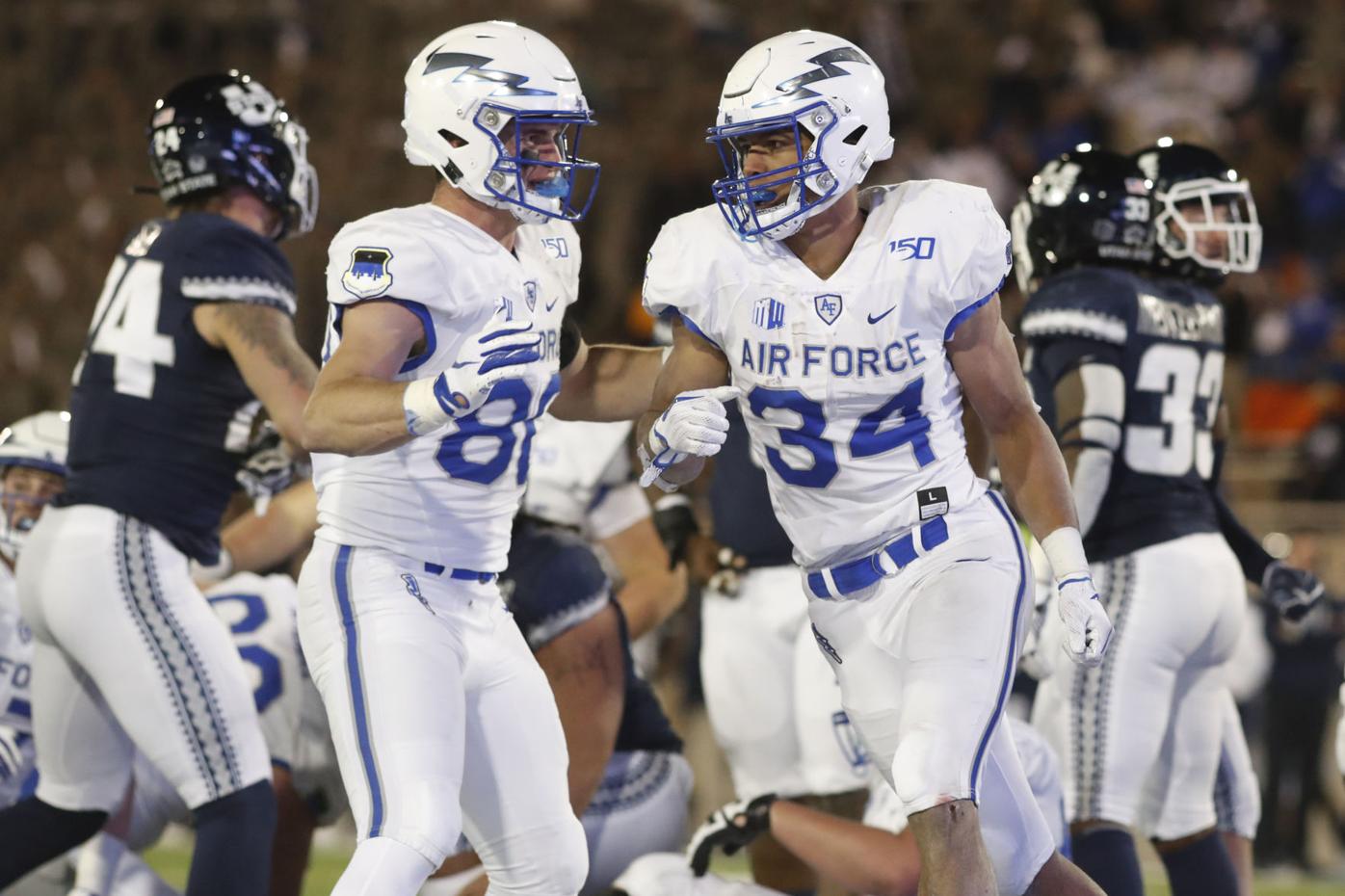 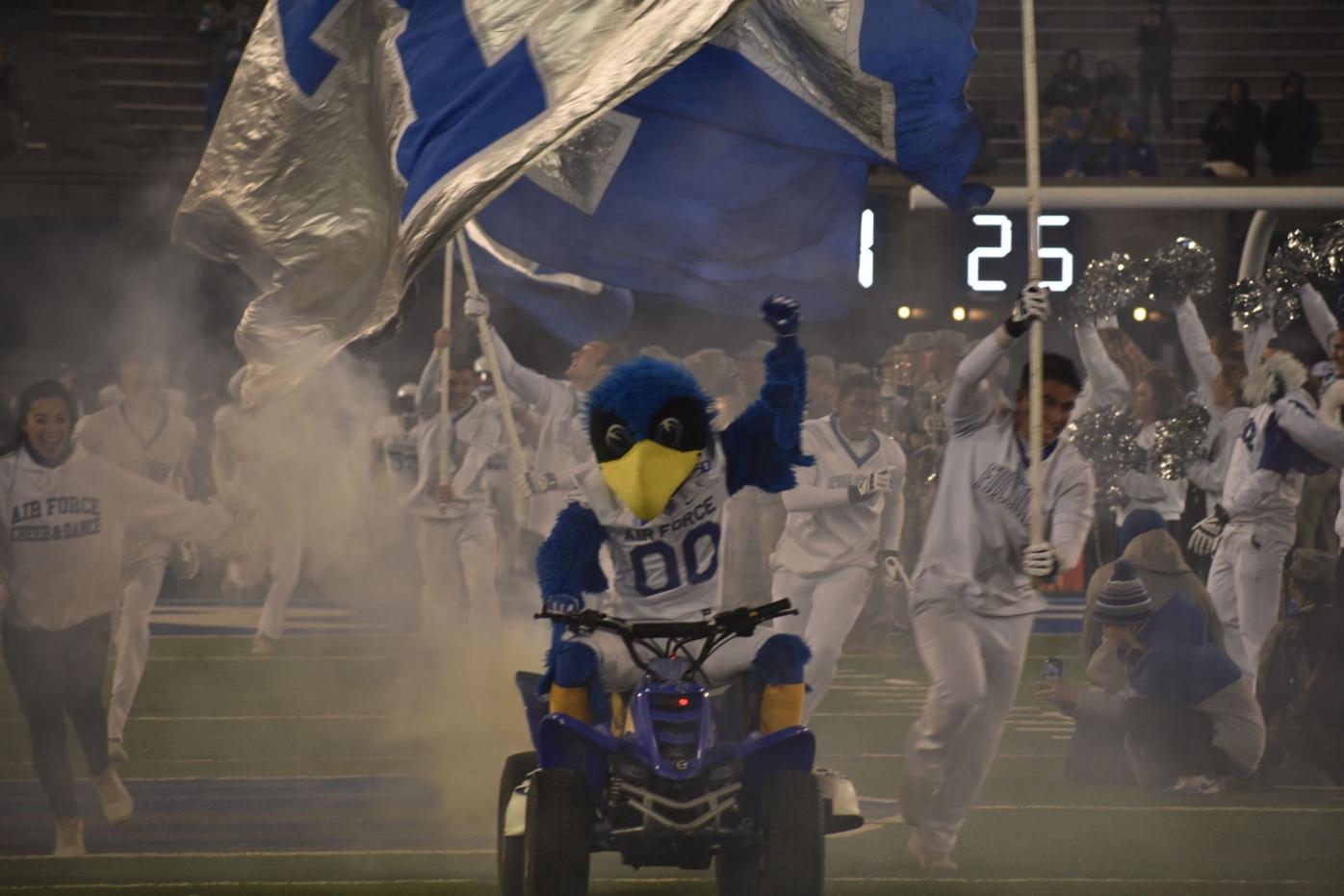 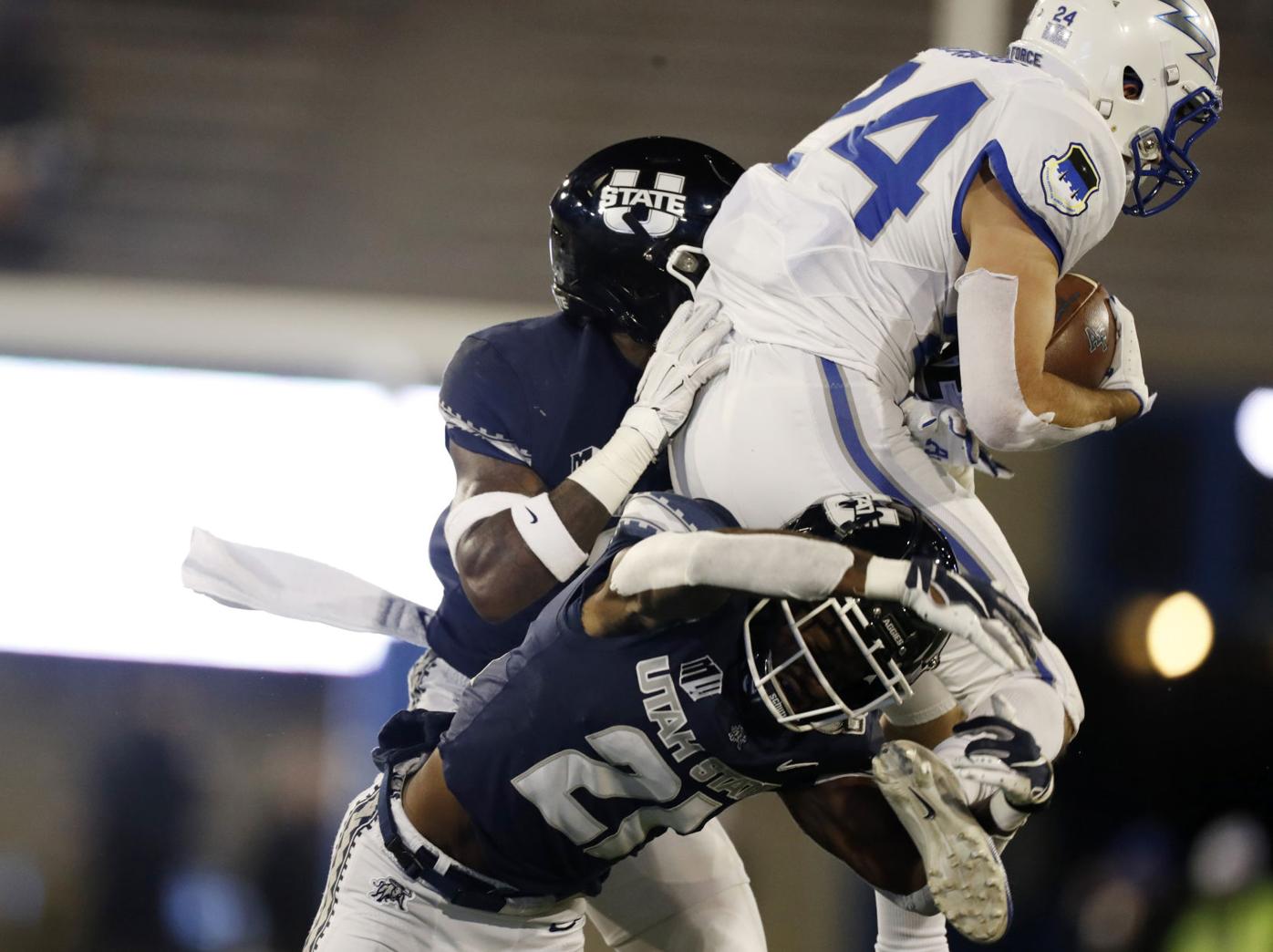 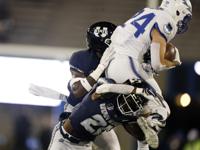 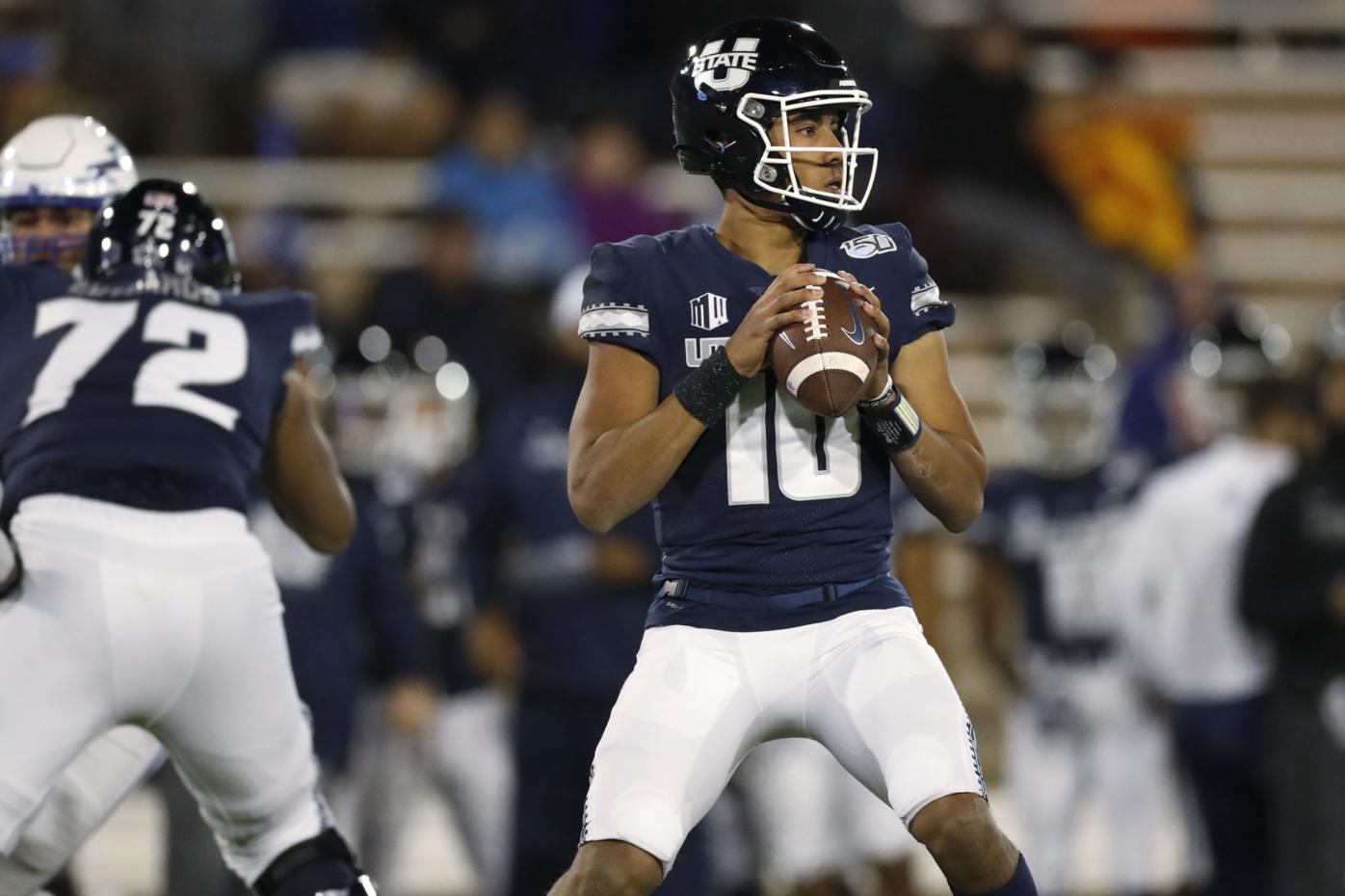 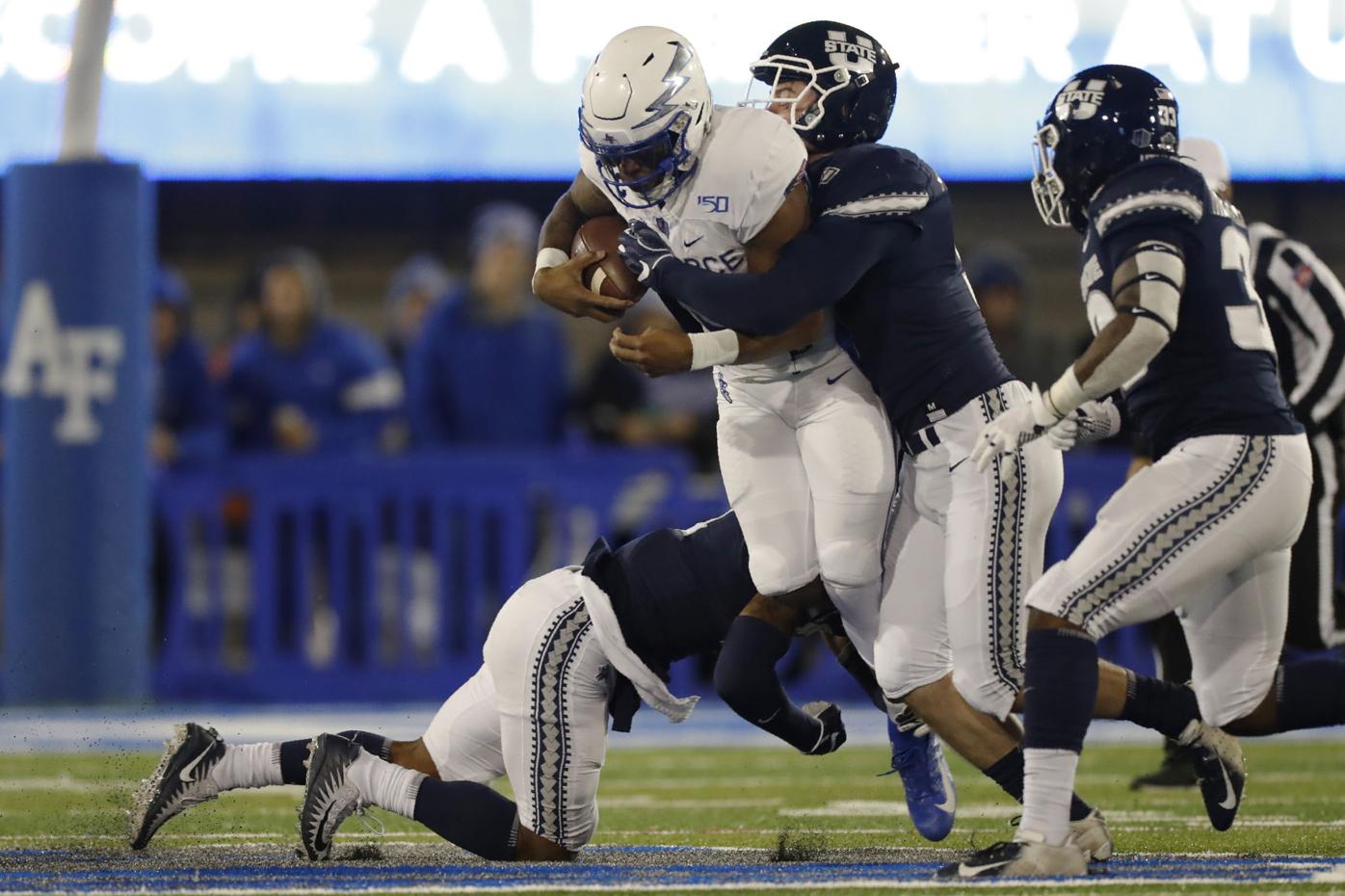 Air Force quarterback Donald Hammond III, second from left, is tackled by Utah State safety Shaq Bond, left, and linebackers David Woodward, third from left, and Kevin Meitzenheimer in the first half of an NCAA college football game Saturday, Oct. 26, 2019, at Air Force Academy, Colo. Hammond was hurt on the play and left the field but returned in the first half. (AP Photo/David Zalubowski) 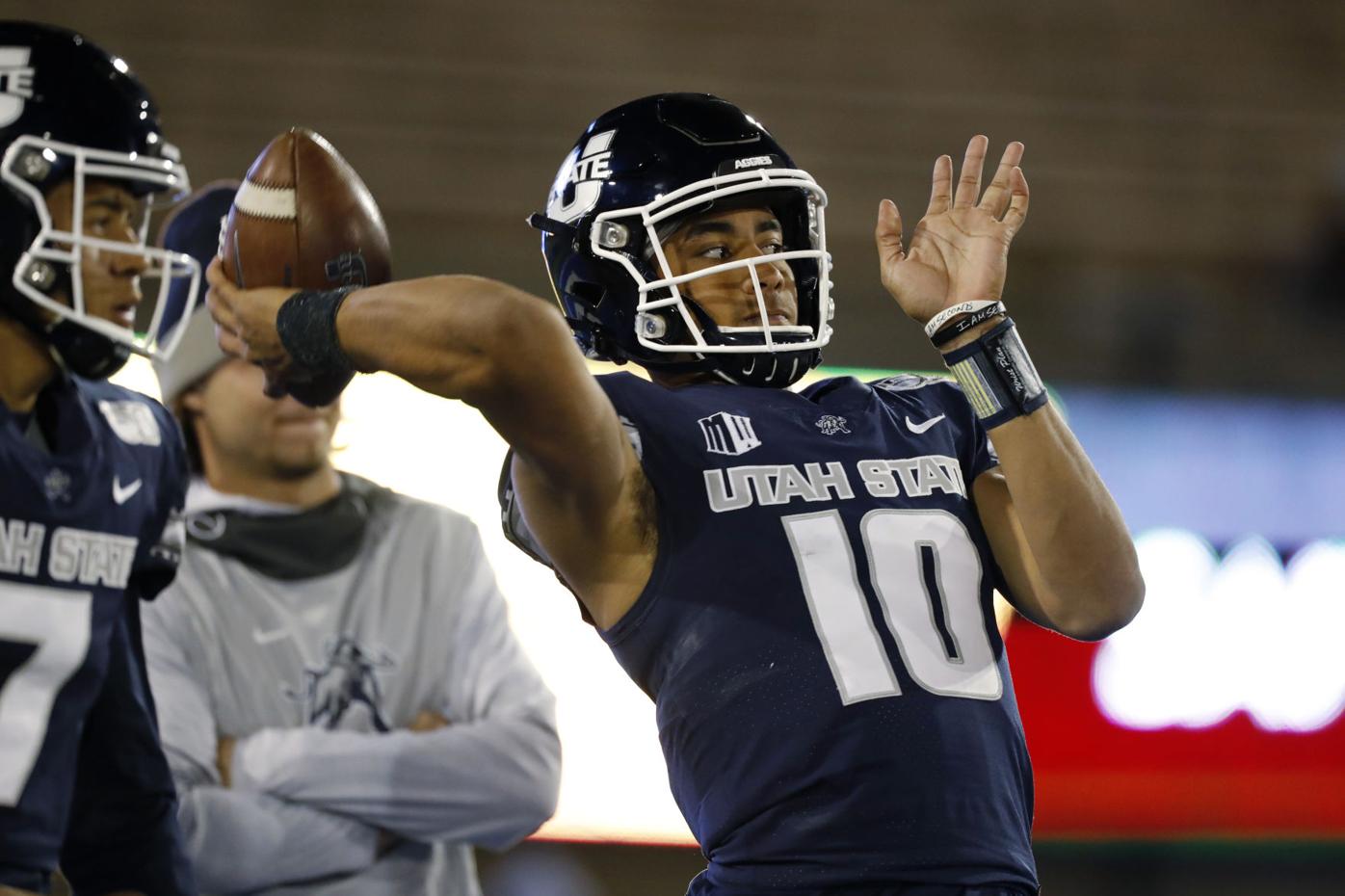 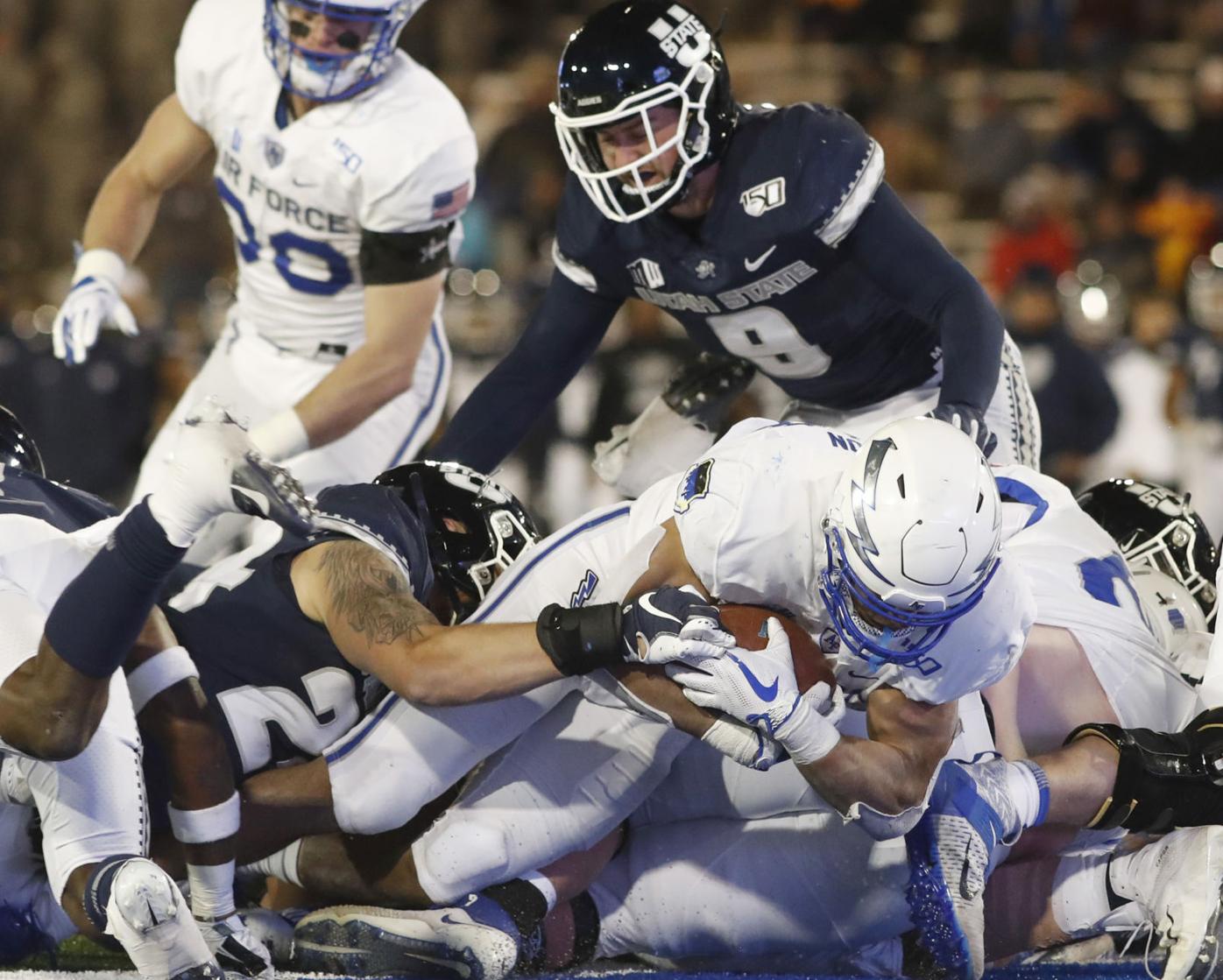 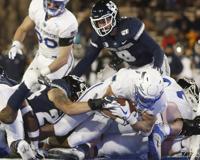 Air Force quarterback Donald Hammond III, second from left, is tackled by Utah State safety Shaq Bond, left, and linebackers David Woodward, third from left, and Kevin Meitzenheimer in the first half of an NCAA college football game Saturday, Oct. 26, 2019, at Air Force Academy, Colo. Hammond was hurt on the play and left the field but returned in the first half. (AP Photo/David Zalubowski)

This performance made Air Force bowl eligible. It ought to make it dream about bigger things, too.

An 11-win season, for example. Maybe 12 if it can sneak into the conference championship game.

After this one, why not?

The Falcons throttled Utah State 31-7 in a late game on Saturday night. This looked like, perhaps, the toughest challenge left on the schedule, and they handled it like an FCS foe visiting for the season opener.

“If we happen to get 11 or 12, then great,” said defensive end Jordan Jackson, part of a punishing defense that forced Utah State into punts on eight of nine possessions. “If not, it is what it is. We’re just trying to take it week by week.”

Since a stretch where Air Force lost two of three in disappointing fashion at Boise State and Navy, each week has brought better results with wins over Fresno State, Hawaii and now this one — that will be tough to match for its complete dominance.

Air Force outgained the Aggies and their NFL-prospect quarterback Jordan Love 472-128. First downs were 30-7 in favor of the Falcons. In the 60-minute game, Love and the Aggies possessed the ball for 14 minutes, 17 seconds.

“Air Force pretty much dominated both sides of the football in this game,” Utah State coach Gary Anderson said. “You’ve got to have things firing on all cylinders to have a chance. Obviously we did not and we got beat badly."

Air Force (6-2, 4-1 Mountain West) rushed for 448 yards, including 148 for Duval Jackson in the sophomore fullback’s third consecutive 100-yard rushing game — a first for the program since Cody Getz did it in five straight in 2012.

Jake Koehnke added a 57-yard field goal for the Falcons at the end of the second quarter.

The Falcons did this despite losing fumbles on their first two possessions and losing starting quarterback Donald Hammond III twice for a handful of plays.

Hammond returned to his spot as the starting quarterback after leaving last week’s game at Hawaii as Mike Schmidt entered and earned Mountain West offensive player of the week honors. With Hammond (shoulder) able to go and Isaiah Sanders back from a leg injury, Schmidt returned to the No. 3 spot on the depth chart.

Hammond left after the game’s first play, but returned for the second series. He later exited for one play.

“King of stung a little bit,” he said of the initial contact on a sprained right shoulder. “I was good to go after that.”

Hammond completed just 1 of 5 passes for 16 yards but ran nine times for 69 yards while directing an offense that kept the ball for three-quarters of the game.

Utah State simply provided no pushback to Air Force after forcing those two early turnovers on fumbles by Isaiah Sanders and Geraud Sanders.

The Aggies went three-and-out on their first three possessions and six times in the game. More than half of their total yards came on a 75-yard drive that opened the third quarter

Since losing in the final minute at Navy, Air Force has won three in a row against teams with winning records by an average of 24.3 points.

“We’re happy that we’re winning games,” Hammond said, “But we can’t let this confidence go to our head and go 6-6.”

Next week Army (3-5) visits after falling at home to San Jose State on Saturday — the same Spartans team the Falcons beat 41-24 at Falcon Stadium.

Army coach Jeff Monken told President Trump that Air Force is "not that tough," at a White House meeting in May. Air Force's response: "I guess we'll see next week."