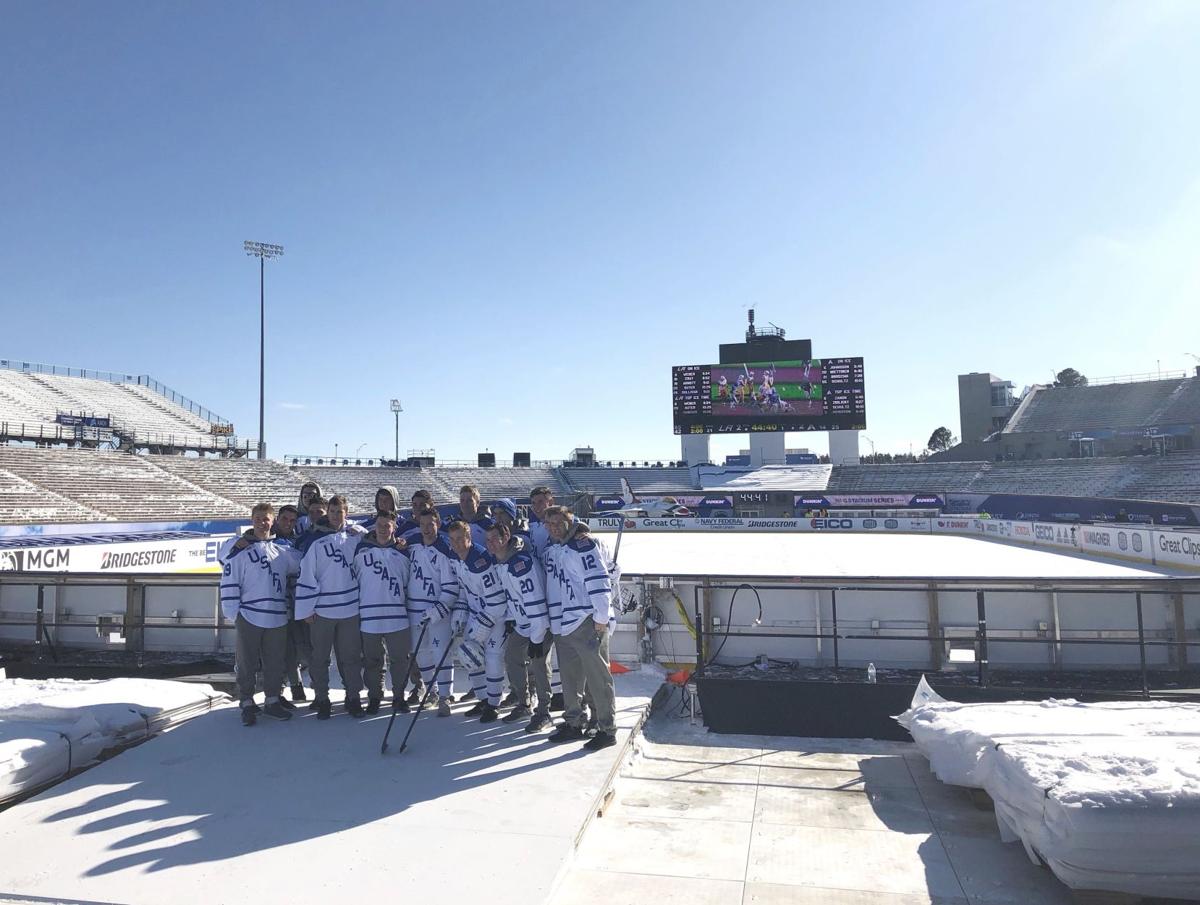 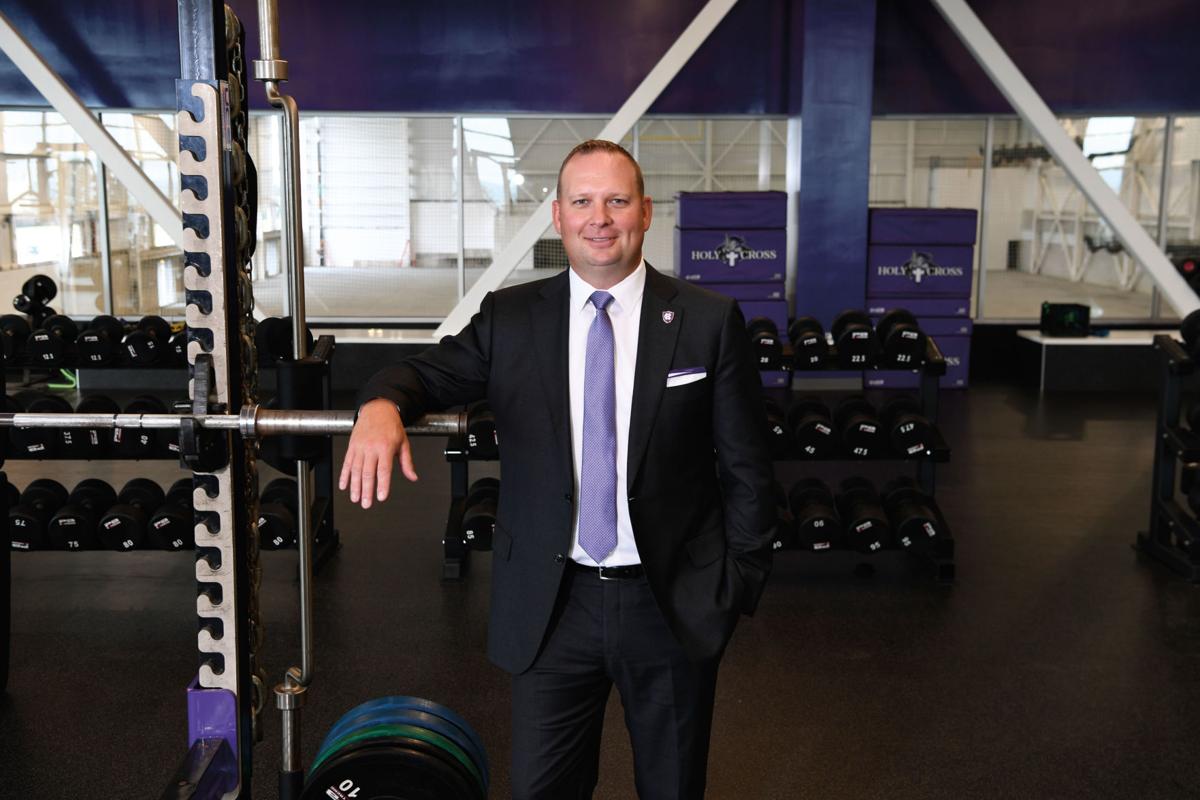 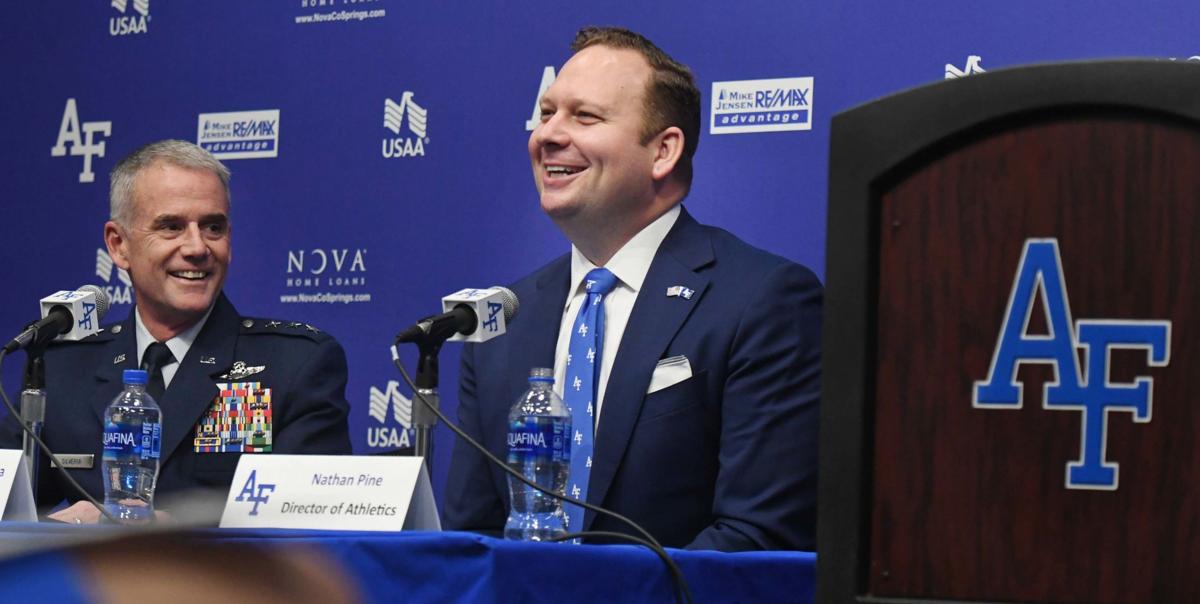 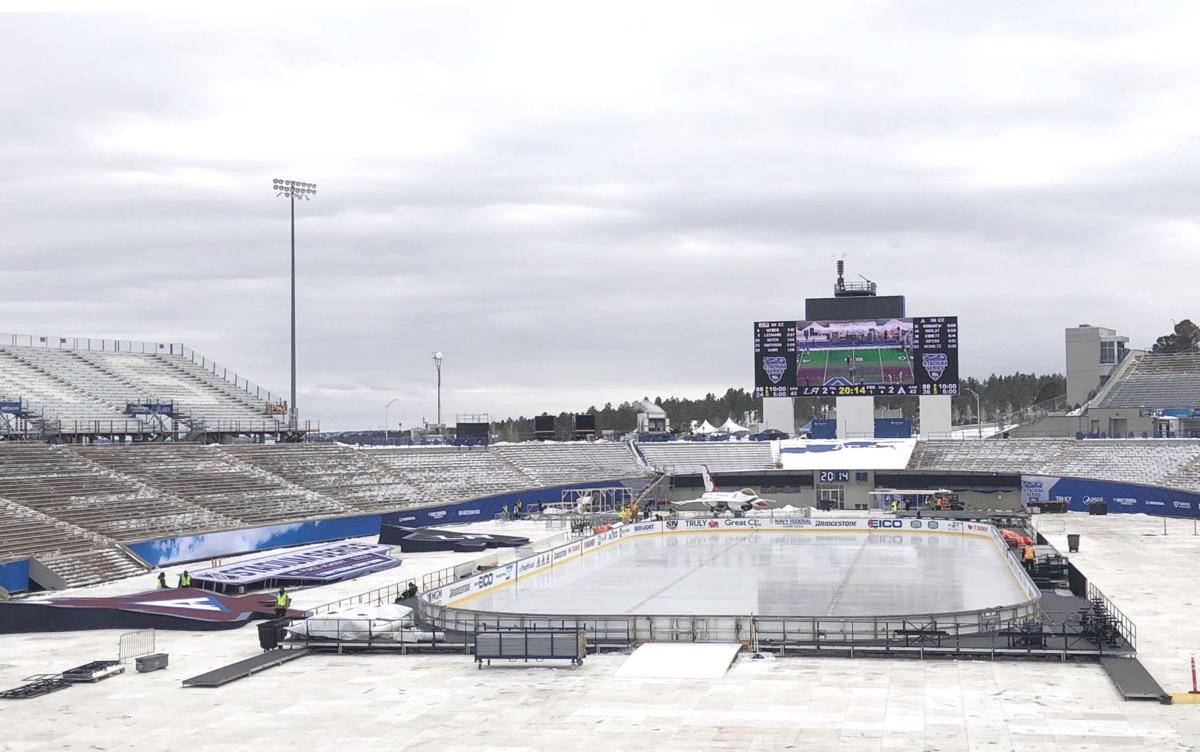 Falcon Stadium has been transformed into an outdoor ice rink by the NHL. (KATE SHEFTE, THE GAZETTE)

Falcon Stadium has been transformed into an outdoor ice rink by the NHL. (KATE SHEFTE, THE GAZETTE)

The NHL’s Stadium Series will feature the Colorado Avalanche and Los Angeles Kings in a game that could pack as many as 43,500 fans into Air Force's football stadium.

“I feel that Colorado Springs is seeing this as a showcase opportunity, and I think ticket sales have echoed that,” Pine said Tuesday. “We’re doing quite well. We’re expecting a sellout for this game, and that’s going to happen because there’s a lot of folks in Colorado Springs who are excited to come to the academy and see this."

The Falcons will take a percentage of ticket sales as part of a formula that also gives them a share of parking, concessions and merchandise as well as a rental fee for the facilities. The opportunity for revenue will extend beyond the weekend, as Air Force will retain rights to the Stadium Series logo.

But Pine, who welcomed The Gazette for an exclusive conversation from his top floor office that overlooked acres upon acres of white on the academy’s snow-covered athletic fields, sees more than green on the horizon.

There’s also the 3 1/2-hour broadcast, including game coverage on NBC, that Pine characterizes as an infomercial for the Air Force Academy. The broadcast will be filled with vignettes from around the academy, including a day-in-the-life follow-along with hockey player Jake Levin. And there’s the droves of fans who might not have previously visited the academy who Pine hopes to capture with an experience that will include flyovers, a march-on from cadets and a parachute display from Air Force’s Wings of Blue.

"The more folks that we can introduce to the academy, and maybe even to the Air Force, is good for our department," Pine said.

An NHL contingent attended the Air Force vs. Army football game in November to take notes of the pageantry associated with service academy football games and has worked to mimic much of that experience Saturday.

“The NHL, they know what they’re doing,” Pine said. “They’ve got a good plan. They’re constantly pushing the boundaries to make each one a little unique, a little bit different, and tell the story of the location they’re at. Obviously we’ve got a lot of good stories to tell, so it makes it a little bit easier.

The NHL game is only one piece of this. The Falcons hockey team also is set to host Colorado College at 5 p.m. Monday on the NHL ice, with around 7,000 tickets sold as of Tuesday. A high school game is planned for Feb. 18, with the possibility of additional youth games — perhaps attached to the city’s annual Presidents Day hockey tournament — added before the NHL crews dismantle the temporary setup Feb. 19.

All of this comes after this past weekend saw No. 4 San Diego State defeat Air Force men’s basketball in a tight game in front of 4,401 — the second-largest Clune Arena crowd in the past seven years. The No. 15 Air Force men's lacrosse team also fell to No. 9 Denver earlier that day in a game that brought a group of fans and tailgaters from the north.

The different levels of hockey, plus lacrosse and basketball, each had the potential to bring different groups to the academy, a goal that has been the driving force to many of the outreach events hosted at the stadium — from a Tiny House exhibition to concerts that have brought Blake Shelton, Tim McGraw and Brad Paisley. Much like the New England Patriots’ week spent preparing for a game at similar elevation in Mexico City led to the L.A. Rams and Chargers doing the same over the next two years, Pine hopes events snowball into more.

“As each one that we have is successful, there’s more exposure to it; more folks that are introduced to the academy,” Pine said. “We understand and continue to look for more opportunities to do more and bigger events. For us, this is the biggest. When it goes well it’s going to open other doors, and we’re always open to those conversations.”

Beyond receipts from the hockey games Saturday and Monday, Pine said a postgame media study will attempt to put a dollar figure on the value of hosting the Stadium Series by measuring print and broadcast exposure, weighing the print space and air time against what it would have cost the academy to otherwise purchase it.

Also, an eye will be kept on any uptick in community engagement for summer sports camps or ticket sales for next year in football, basketball and hockey. Applications for the academy could also see potential growth and will be monitored.

“Some of those things we’ll have to wait and see,” Pine said. “But a first-time exposure and a good experience usually brings a repeat customer.”

All this, and, for once, the Falcons don’t have to sweat the outcome — at least Saturday night.

“You always probably pull for the local team a little bit,” Pine said of the Avalanche, “but at the end of the day the winner is less important to the academy folks than maybe the presentation and the experience and where people leave feeling about their day here."

Air Force's losing streak hit seven in a row after Boise State pulled away in the final 10 minutes on Tuesday.