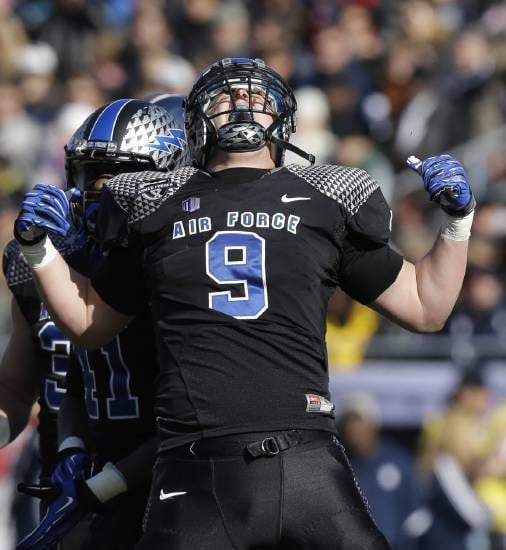 Air Force linebacker Alex Means (9) celebrates a sack against the Rice during the first half of the Armed Forces Bowl NCAA college football game Saturday, Dec. 29, 2012, in Fort Worth, Texas. (AP Photo/LM Otero) 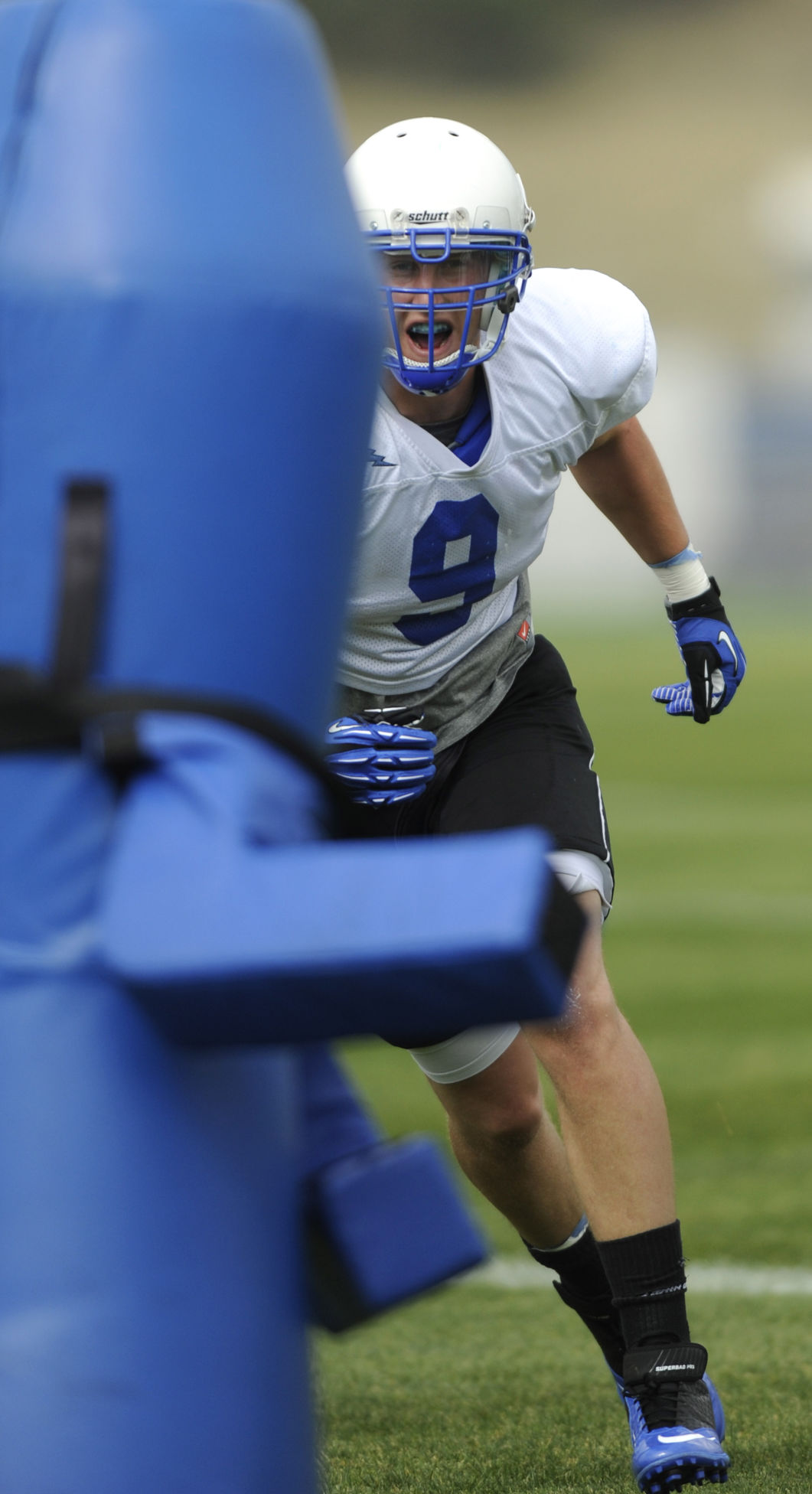 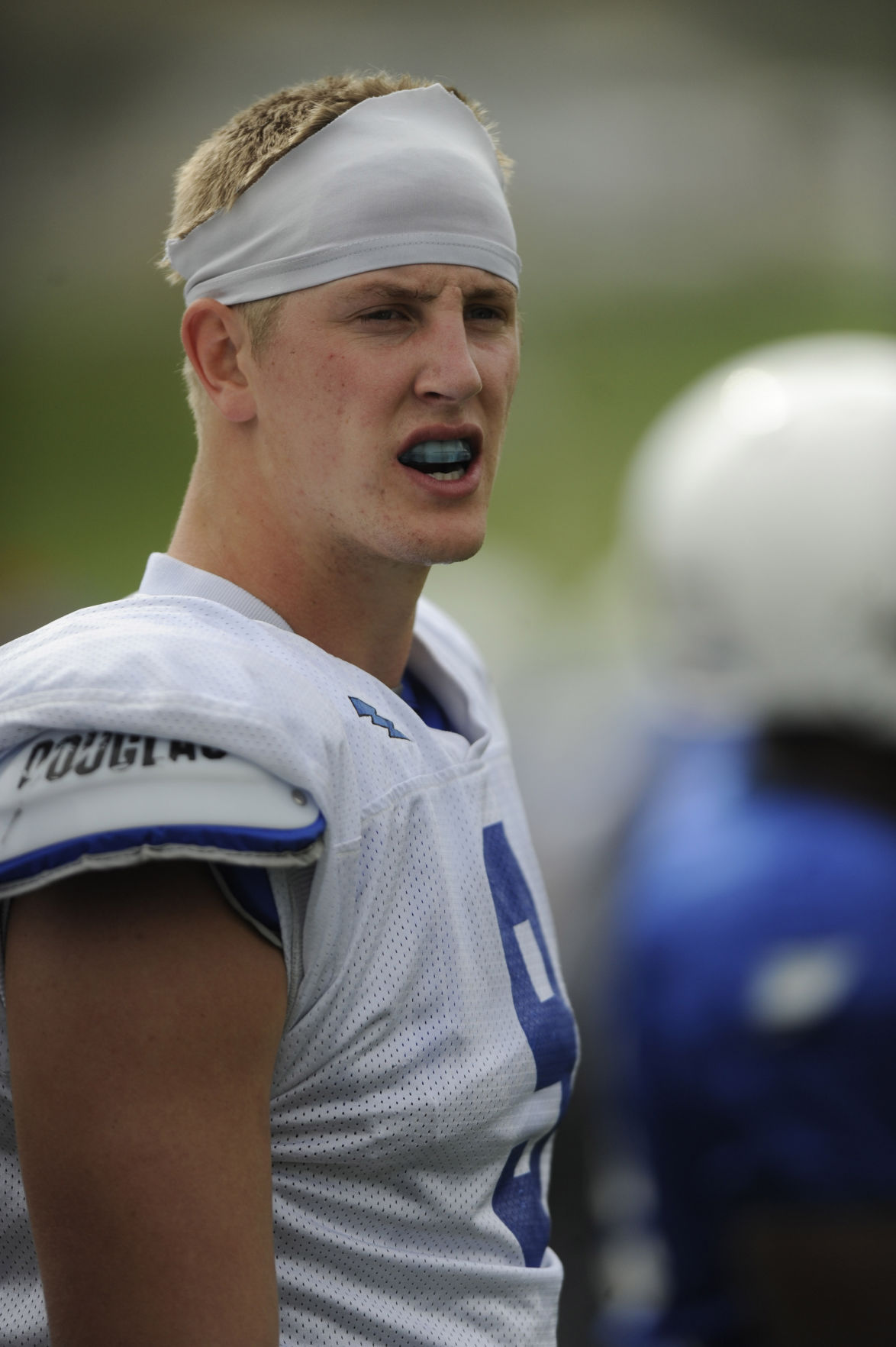 Air Force linebacker Alex Means (9) celebrates a sack against the Rice during the first half of the Armed Forces Bowl NCAA college football game Saturday, Dec. 29, 2012, in Fort Worth, Texas. (AP Photo/LM Otero)

The way Alex Means sees it, he boarded a “rocket ship” in Germany. And it brought him right back to where he started.

The former standout Air Force outside linebacker has worked his way back into the same position room, coaching the spot he once played.

“Part of me feels at home,” Means said. “I grew up in this program as an outside linebacker, playing this position. It feels like life is starting to come full circle.”

Means helped the Falcons to four consecutive bowl games as a player, earning second-team all-Mountain West honors as a senior while taking team Most Valuable Player recognition. He earned invitations to NFL minicamps following his career.

He returned for one year as a graduate assistant before being sent out on his military career.

It was while stationed in Germany and serving as a captain that he had the epiphany that he desired to enter the coaching profession. He phoned coach Troy Calhoun and, within hours, had an offer to serve as assistant at the Air Force prep school for the 2017 season.

By 2018 he was on the Falcons’ staff as a quality control military assistant. In June 2018 he separated from the Air Force as a captain and joined the staff full time as an assistant defensive line coach. After several assistants departed for larger programs and an NFL spot following an 11-2 season and No. 22 national ranking, Means took charge of the outside linebackers.

“He’s been a super, super addition,” Calhoun said. “He has his own meeting room, as he should. He’s got a great, great feel for that position; he played it. But just the work that he’s done to go out and learn and increase his knowledge. And it’s been neat to see, not only at that position, but being able to gather the bigger picture of what we’re doing defensively, too.”

Means will work in crowd control during his first season. Lakota Wills returns for his senior year and figures to be a four-year starter at the position. But remaining healthy has been a consistent issue for Wills. Behind him is fellow senior Grant Donaldson, the Cheez-It Bowl MVP, and rising junior Brandon Gooding, a former three-star recruit who stood out in spring practice.

It’s possible someone from that position could slide into a pass-rushing position in certain situations to allow two to share the field at the same time. Some could also work in at the “spur” linebacker position that is a hybrid between outside linebacker and defensive back, but there’s a glut there as well with candidates like Caleb Humphrey, Parker Noren and James Jones seeking action.

Right now, all of that is on pause as the academy sent all non-seniors home as a result of the coronavirus.

Means, a father of three children under 8 years old, has tweeted about his role in teaching the at-home work that has come with schools closing because of the virus.

The part of Means’ job that hasn’t ended is that of recruiter, and that’s where he feels like he’s the most natural fit. His work, primarily in the state of Arizona, has helped the Falcons procure commitments from three-star recruits Kyle Patterson and Nate Polk.

“That’s my favorite part of this entire job. To be able to go out and talk to the next generation and say, ‘Hey man, we’ve got a life-changing opportunity for you. There’s something special for you if you’re ready for a fun ride, but you’ve got to work for it.’”

Calhoun says it's Means' integrity, as much as his past experiences, that allows recruits to trust in his message. But having lived that life, with enthusiasm, certainly helps.

"I feel like I’ve been on a rocket ship, and it’s awesome," he said. "I’m loving every minute of it."

Air Force's defensive coaching staff will have an entirely new look in 2020.