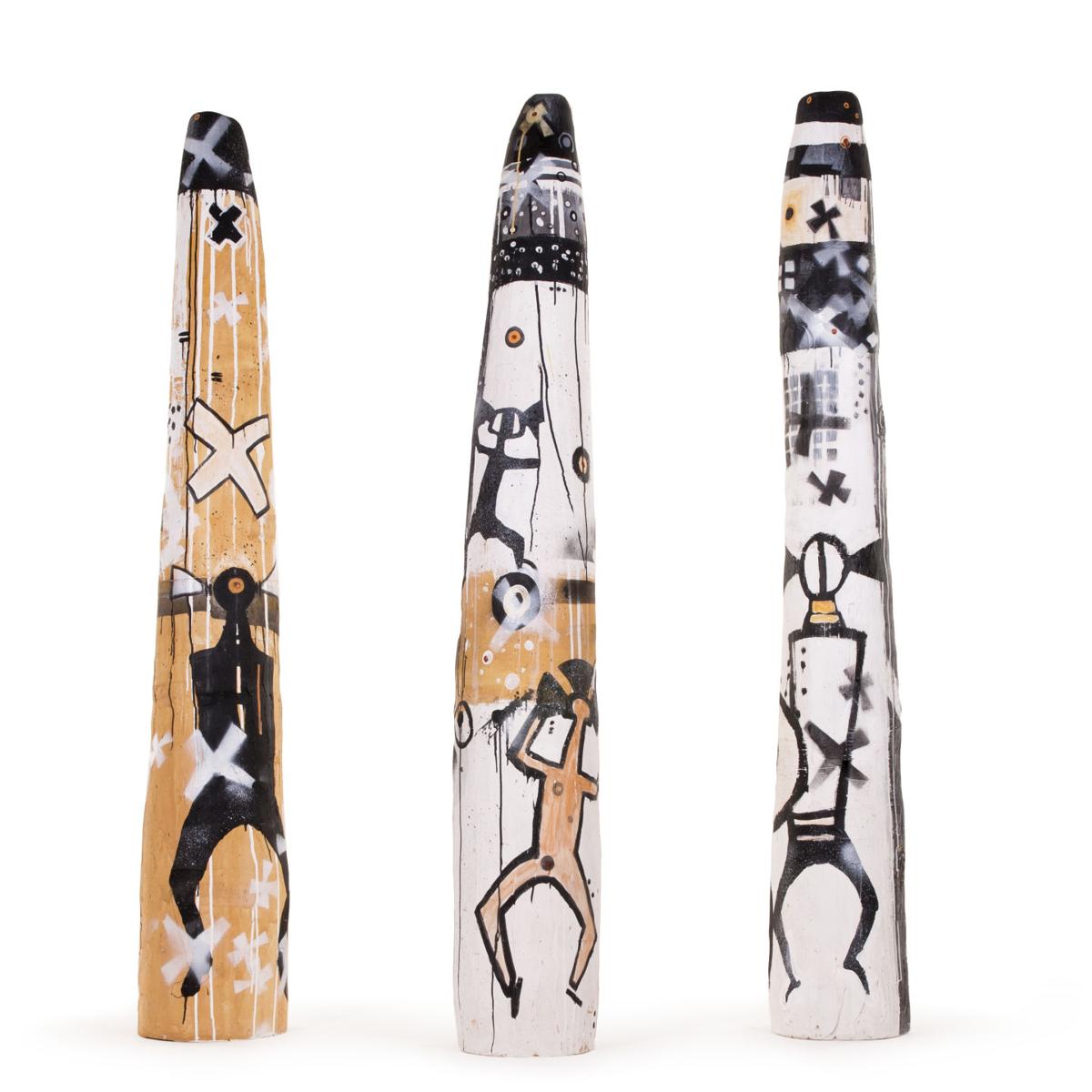 Nora Naranjo Morse, The Black White and Brown of It, 2008 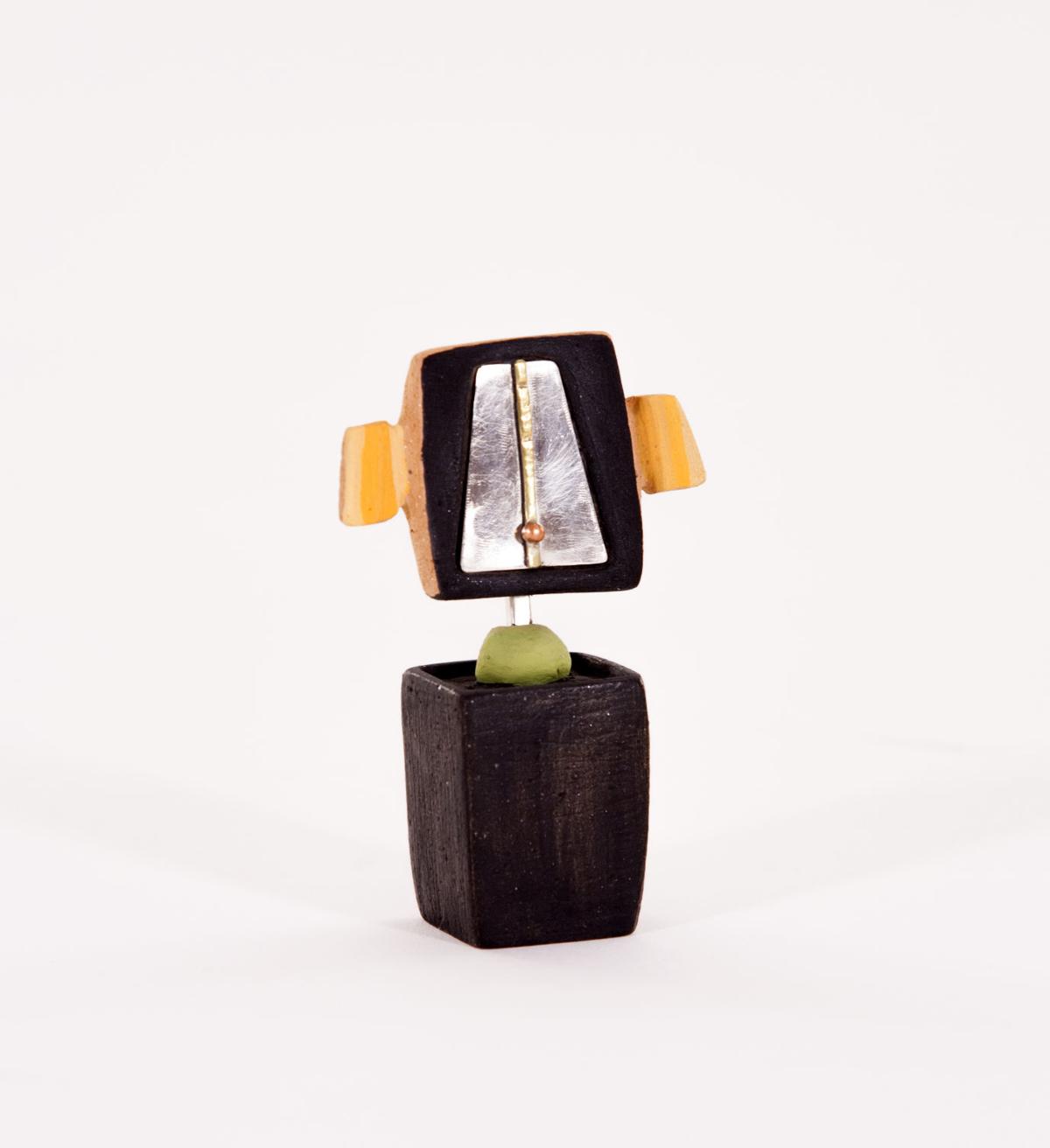 Nora Naranjo Morse, The Black White and Brown of It, 2008

At one end of the FAC gallery that contains Nora Naranjo Morse’s exhibition Gathering Ground hangs a horizontal aluminum sculpture, striking not only in its appearance but also in its scale. Although contemporarily rendered, patterns that are unmistakably ancient and Native in origin interlock evocatively.

Entitled Stories upon Stories and part of a permanent collection at the Smithsonian, it’s on loan for this exhibition. Of the inspiration behind it, Nora said, “I went walking in traditional pueblo tribal land, and I looked down and realized there are pottery shards all over the place, and instead of picking them up, I’m thinking, ‘Oh, just think of the hands that made this, that painted it — and their stories.’ So I’m taking those stories, interpreting them, and adding my own.”

Not picking up those shards was uncharacteristic of Nora. In fact, the title of the exhibition itself is derived from her penchant for gathering. “I travel quite a bit, and I’m always looking on the ground,” she laughed, “because I’m looking for material.” And indeed, gathered materials compose some of the most impressive installations in the exhibition.

Before even entering the gallery, the viewer is encountered by Webbing — a large serpentine sculpture that hangs over the entrance, beckoning patrons to follow it inside. Innovative lighting on the sculpture casts spectral dragon-like shadows on the surrounding walls. What the sculpture is composed of may not be immediately obvious, but upon closer inspection the viewer begins to notice all the small individual pieces: mesh from screen doors, packing material … crime scene tape.

Naranjo Morse said, “I’m making an environmental statement through these pieces. Collecting peoples’ discards. Because I was brought up in a world where you didn’t throw anything away, and then to realize we consume and discard in such a thoughtless way. I’m looking at the materials and reinventing a use for them.”

Likewise, the multiple sculptures composing the Gathering Again installation inside the gallery continue this approach with shower curtain rings, an old whiffle ball, cattle fencing and parts of tomato cages as components. The threading of all these elements become the cellular makeup of each piece, and contribute to communicating their greater message.

“This has taken me a lot of years and it’s been very meditative. When I started bringing the discarded material into the studio, I had no clue what I was doing at all. But there was a real deconstruction process of taking things apart; I was taking all of these things that I had been socialized to believe in my lifetime — as a Native person, as a human being, as a consumer — and started deconstructing it and then reconstructing [the works],” she said.

And ironically, in that reconstruction, these elements of disposable culture have been transformed into an engaging message about environmental awareness.

Naranjo Morse’s art career spans more than 30 years, and this exhibition features a diverse variety of her work. But as diverse as the various media may be, the sentiment always circles back to her passions for gathering, challenging stylistic labels and raising awareness.

Originating from the Santa Clara Pueblo of New Mexico, Naranjo Morse never wanted to be pigeonholed by creating the type of work that is commercially expected from a Native artist. “Because I come from there, and I’ve been raised in a particular cultural perspective, I think it informs my work quite a bit. But because I live in this ‘other world,’ I’m also informed by that.”

She recalled growing up part of a long multigenerational line of Native potters. “I would help my mother, so I knew the process very well; how to gather, what to look for, the different clay veins that run along the hillsides in New Mexico.” Despite this, she did not immediately feel drawn to it. But after earning a social welfare degree, Nora spent only about a week in an office environment before realizing it was not the life for her.

One day, as she contemplated the next path to take, her sister who was potting handed her some clay and, “I felt like I had come home. This is what I want to do; I don’t want to be in an office. I want to be in the mountains gathering clay. So that was the beginning.”

But she would never be content with the idea of making art that would be marketable at a Santa Fe trading post. She gradually evolved from working on pottery to exploring other media, like bronze. In the late 1980s, this was a statement in itself because at the time, bronze artwork was very male-dominated in the Native art market. By delving into metal sculpture, she was also breaking down preconceived ideas of what a woman’s capabilities in the art world were.

With The Way She Leans into Him, a rendering of Native imagery expressed in the unexpected media of bronze, explores subtle emotional nuances. Said Naranjo Morse, “I’m capturing one of those seemingly ordinary moments where a woman leans into her man, or listens to hear something. That second of movement which says volumes about the strength of this woman. This flexibility.”

Nora’s abstract clay sculptures show how she’s been able to push the previously accepted limits of what Native clay is capable of building. The Black White and Brown of It are tall, totem-like sculptures that seem to defy the limitations of the media from which they’re constructed. Likewise, the sculpting of the pieces in Stacked required the gradual layering of clay coils to achieve their impressive heights.

The recycling and repurposing of materials also seems to carry over symbolically in her frequent use of circular themes. “I like the idea of the circle, because it’s so continuous, and what you put into that circle or take out of that circle is an interesting thing to me.”

Halo-like rings surround her otherworldly clay sculptures entitled Pods. She said, “These were made because there are these beautiful pods in my garden, they have this sort of fantasy element to them, and I was responding to that.” Each pueblo has a variety of clay that is particular to the local environment, and about 20 years ago, Nora began combining clays, blending the (significantly stronger) micaceous clay that is traditional to the Taos Pueblo with Santa Clara clay. “And you can see some of the glitter — micaceous clay has this beautiful glitter when you fire it,” she added.

Bringing her creative philosophy full circle, she said, “There’s nothing else I can do in my life that interests me at all, except to look around and see what it is that I’m inspired by and the materials that I can collect to speak to these issues: cultural, social and environmental. I am very influenced by Native traditions, but I also know that I live in this world. And how am I navigating it? I’m really interested in doing something else.”