Mitchell High School senior Andrew Ware juggles schoolwork, football and working shifts at Burger King. Ware hopes to study culinary arts or business in college. "There's a lot coming at me at once," he says, "especially now, in my senior year." (Photo by Christian Murdock, The Gazette) 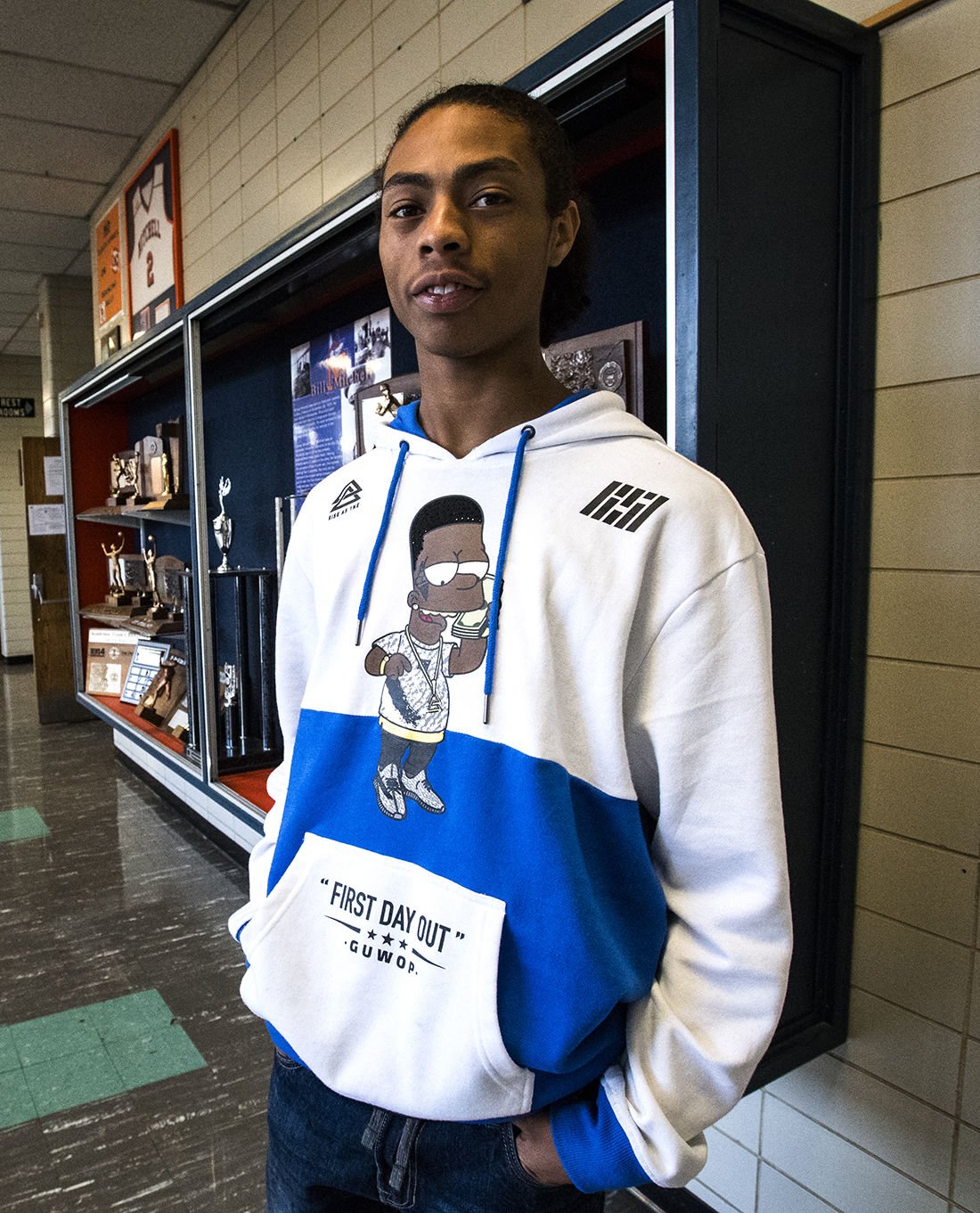 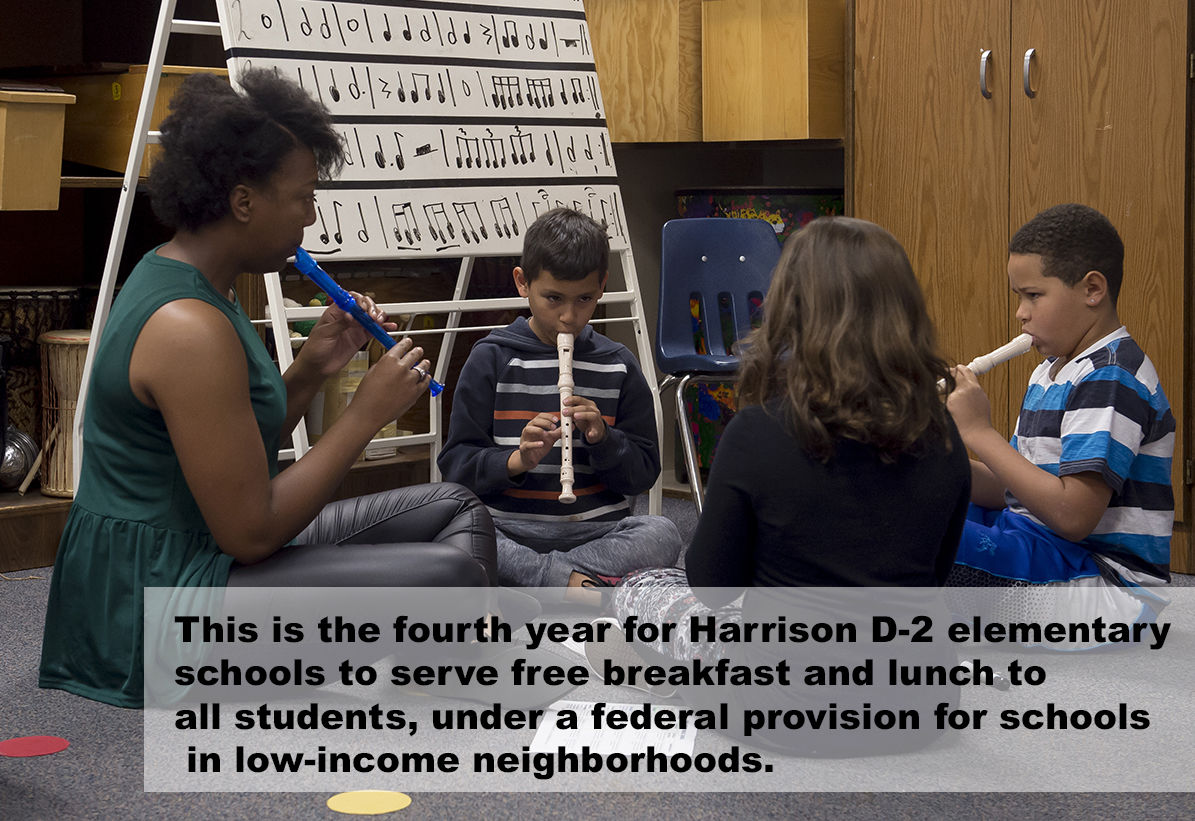 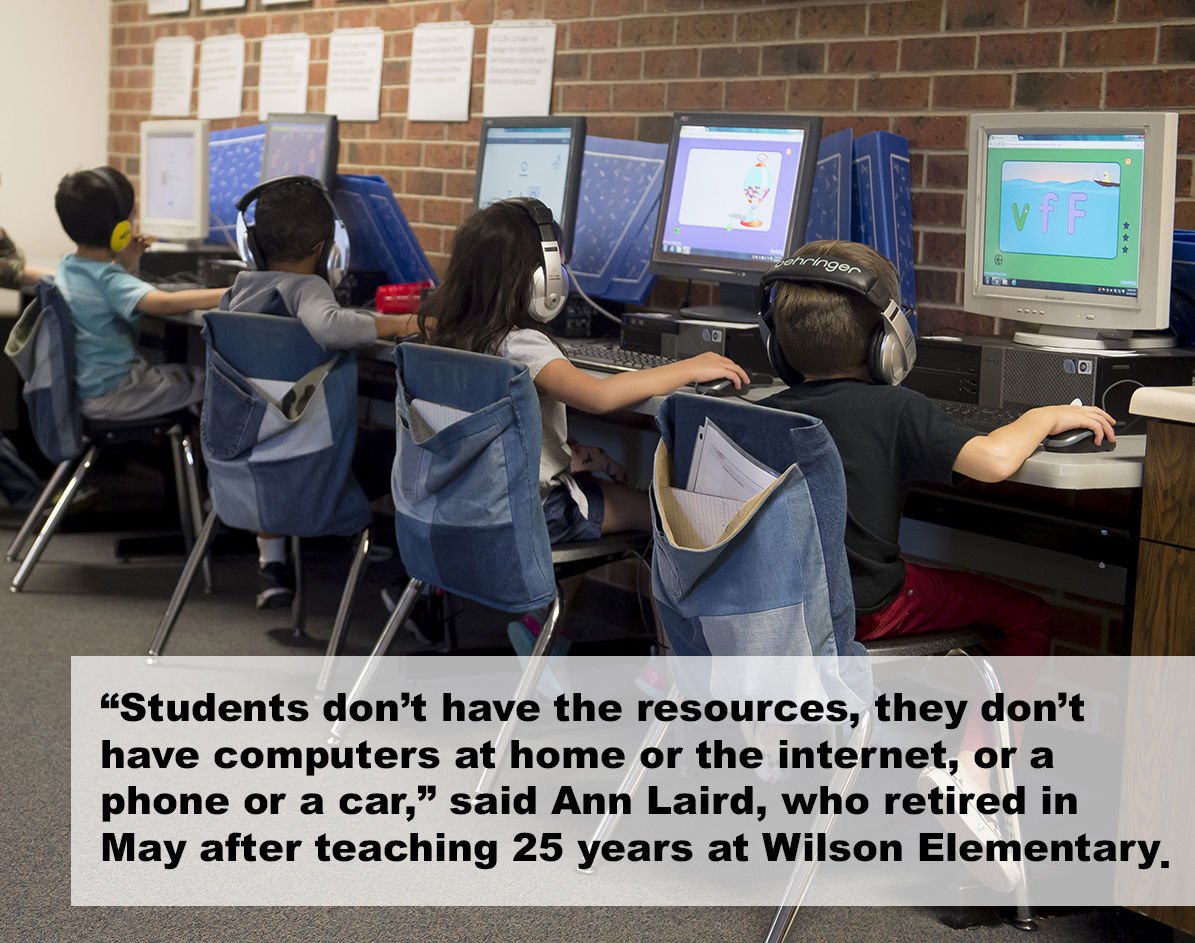 Students at Wildflower Elementary School use the computer lab. The school's poverty enrollment jumped to 84 percent this year. (Photo by Dougal Brownlie, The Gazette) 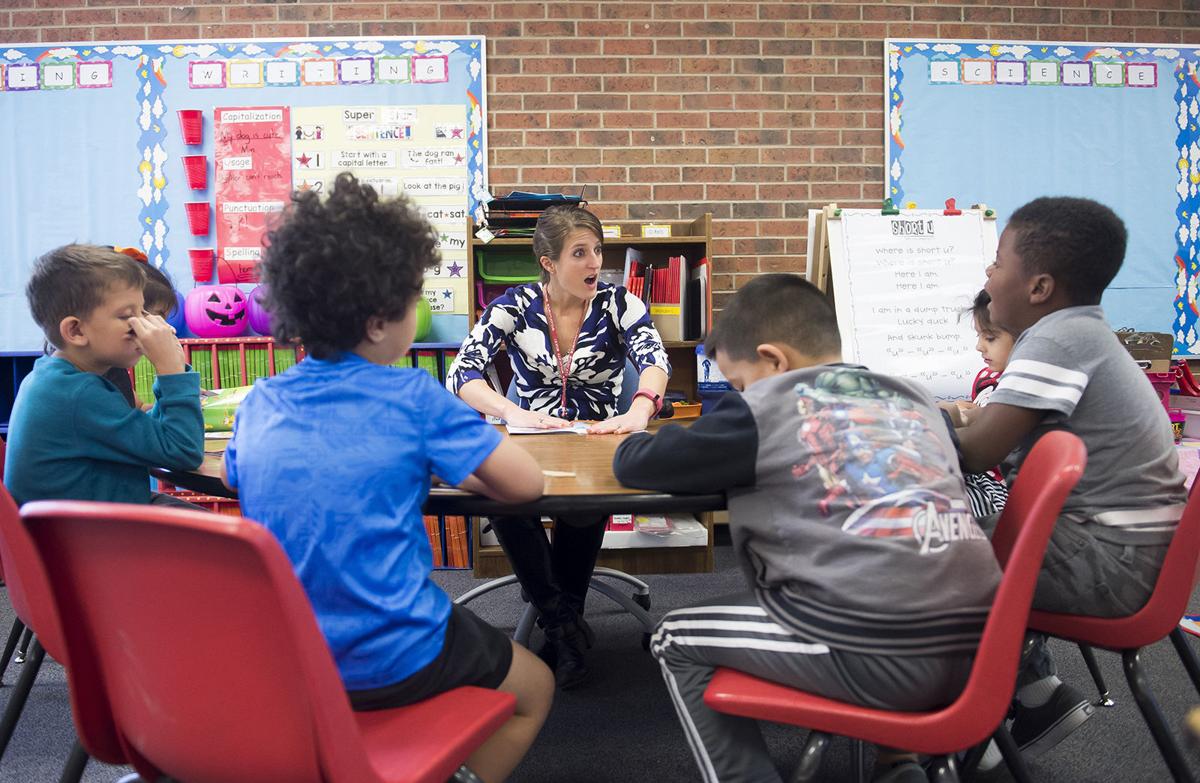 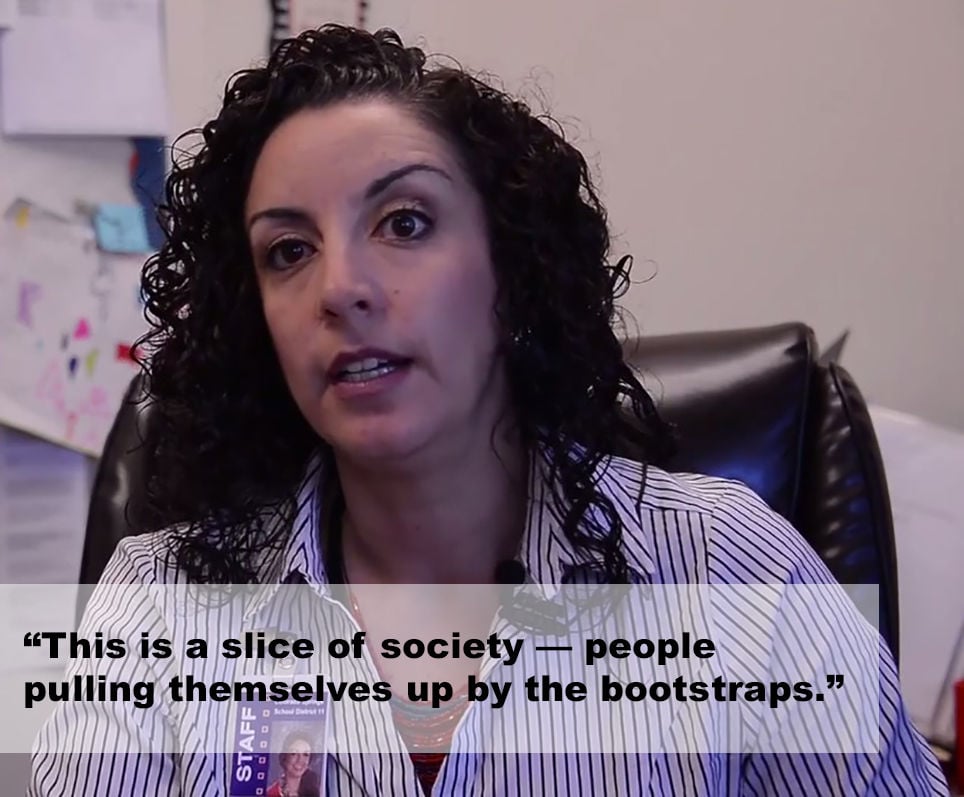 When he gets to school at 7:40 a.m., 17-year-old Andrew Ware already is tired. The night before, Ware had practiced football for three hours, then slung hamburgers and manned the drive-through at a Burger King for another three hours.

Sleep is a luxury he can’t afford.

“It’s really exhausting,” said Ware, the captain of the Mitchell Marauders football team. “I barely have time for homework.”

Most of his minimum-wage earnings help support his family, paying bills and buying necessities for the household.

“There’s a lot coming at me at once,” he said, “especially now, in my senior year.”

But Ware sees the positive in his difficult schedule.

“It’s helped me become a grownup faster. It gives me responsibility for when I get to college.”

Ware’s life experience is more the norm than the exception at Mitchell High School in Colorado Springs School District 11.

Located east of The Citadel shopping center since opening in 1965, when the area was bustling with vitality, Mitchell, like other southeast-area schools, has struggled in tandem with southeast’s neighborhoods.

Students are more likely than not to be considered economically disadvantaged, and many have parents who didn’t finish high school, let alone go to college. U.S. Census Bureau statistics show as low as 8 percent of adults living in parts of southeast Colorado Springs have a college degree.

“Our kids are not privileged,” said Mitchell Principal Carlos Perez. “They don’t come from privilege, so they have to persevere and be even more determined to meet their goals.”

Poverty, along with difficult home lives and personal circumstances, the absence of electronic devices outside of school and a lack of emphasis on the importance of education can result in students trudging through their academic career with automatic strikes against them.

They also tend to have more behavioral problems. Overall, about one in four students in southeast Colorado Springs middle and high schools were disciplined last school year. That compares to the statewide average of about one in 11 students.

Altercations related to racial tensions and drug deals flare from time to time at southeast schools, including an incident in October 2016, in which a sixth-grade boy stabbed a classmate with a pencil. The incident led to a plea agreement in juvenile court and a civil lawsuit by the victim’s family, claiming bullying and racial slurs were involved.

Being in the midst of high crime and gang activity, inner-city schools have taken on the role of safe haven, where children can feel nurtured and encouraged, not fearful and anxious, educators say.

“One thing I think we do a really good job of is not highlighting it as a challenge, but as an opportunity,” said Andre Spencer, superintendent of Harrison D-2, the region’s most culturally, ethnically and economically diverse school district.

Harrison D-2 comprises nearly all the schools in the southeast, except for Mitchell High and its feeder schools, which draw students from the southeast side.

After decades of sub-standard achievement, Harrison has accomplished what seemed like the proverbial impossibility of moving a mountain.

Several D-2 schools have improved academic performance enough to be recognized by the state and federal education agencies. And a few weeks ago came the announcement that both the 2018 Colorado Teacher of the Year and Counselor of the Year hailed from Harrison schools.

Strategies that lead to success are sensible, say educators who have seen results.

“We need to adapt to students’ needs,” said Ann Laird, who retired in May after teaching 25 years at Wilson Elementary, whose students eventually go on to Mitchell High. “I realized their parents don’t put as much value on education and aren’t educated themselves so can’t help with second-grade math because they don’t know how to do it.”

Many underprivileged youngsters start kindergarten already behind, not being familiar with letters or counting.

Laird’s school started an exchange program for students to take home books to read and explored the city during school-day field trips.

Schools in poor neighborhoods have to be more than classrooms, more than a place where students are taught for seven hours and then sent home. When basic necessities are not being met at home, schools are stepping in.

Poverty among Harrison D-2 students continues to climb, from 65 percent of qualifying for free and reduced meals in 2007 to 76 percent last year districtwide — one of the highest percentages along the Front Range, according to state education statistics.

This is the fourth school year for D-2 schools to serve free breakfast and lunch to all students, under a federal provision for schools located in low-income neighborhoods.

The program has made a “huge difference,” said Wendy Godwin, principal of Wildflower Elementary, which in September won a National Blue Ribbon Award for ranking in the top 15 percent of all Colorado elementary schools on state assessments for multiple years.

“We’re not hearing kids say they’re hungry anymore, which is phenomenal,” she said. “Research has said a kid that comes to school hungry is not going to perform at their best. We want to ensure our students are having those opportunities to eat.”

“We are in a lower socioeconomic area, and the needs of the community have increased,” she said.

Spencer said district staff “know there are services our kids and families will need,” so it becomes a matter of “how do we work with community partners to provide that service.”

The needs vary by school. Some schools work with agencies such as Care and Share Food Bank to give students food they can take home for their families. A few schools have an on-site health center. Two D-2 elementary schools have switched to a year-round calendar, which has helped with child care and students’ retaining information over the summer.

“All of our schools are seen as a community resource,” Spencer said. “We’re going to make sure we’re giving our kids and families all we can so they can be successful in life.”

Godwin said staff members are “constantly reaching out” to parents, she said, to figure out how they can help, from free dinner and discussion nights to free tutoring and free club memberships.

Students say they’re proud of Mitchell, like what it offers in the way of education and extracurricular activities, but it continues to have a stigma.

The topic comes up at sports events and other competitions, and even in normal conversation, said junior Rosa Henson.

“People ask where you go to school, and if you say Mitchell, they make a face, a smirk, a comment under their breath,” she said. “They don’t realize how successful the school is, and they dismiss the good things.”

Rosa ticks off Mitchell’s vast performing arts offerings and having the largest ROTC west of the Mississippi, automotive and construction trades programs and athletics.

But there’s still plenty of work ahead.

Mitchell High School’s class of 2016 saw the lowest graduation rate among high schools in the southeast, at 72.4 percent, compared with about 79 percent statewide. Mitchell also had the highest dropout rate last year, at 2.6 percent, slightly higher than the state average of 2.3 percent.

Pikes Peak United Way, in partnership with the University of Colorado at Colorado Springs, selected Mitchell in the spring for a pilot program, Colorado Springs Promise, to help improve its graduation rates.

Mentoring students, providing free refurbished computers, conducting fundraisers to pay college application fees, coaching students on interview skills and other assistance is being offered to help motivate students to stay in school and go to college.

But it’s been declining: D-2’s graduation rate decreased from 88 percent in 2013 to about 80 percent in 2016. Still, the rate is much better than 2010, when only 67 percent of D-2 students graduated, according to state figures.

“We want people to recognize that these are just kids like in any other district, whether they’re affluent or not, and we’re here to give them the best education they can possibly receive,” Wildflower’s Godwin said.

“I think we’re underestimated in Harrison, and some people may not realize all of the amazing things that are happening in our district.”

If a tornado uprooted Mitchell and plunked it down in a more affluent neighborhood, senior Noah Cisna believes it would have a much different image.

“We get that bad reputation because of our location,” he said. “We’re doing so much to change the idea that Mitchell is not a great school.”

“This is a slice of society — people pulling themselves up by the bootstraps,” she said. “Our students are more prepared for whatever comes in life, they can work together with people who may have another experience that is unlike their own.”

“Whether it’s poverty or they’re homeless or they’re adults as children, having to raise younger siblings, that contributes to the grit that young adults need to be competitive and for society to sustain itself,” Sanchez-Martinez said.

Student body president Jonathan Pena said he was bullied at his previous school and didn’t make many friends.

“The people here inspire me,” he said. “You don’t feel segregated; you feel welcomed. Sure, we have fights like any high school. We have a bad reputation, but our school isn’t bad at all.”

Among high schools in the southeast section of town, Mitchell had the lowest percentage of students disciplined last school year — 21 percent.

“I’m happy for the struggles,” Noah said. “We’re fighting for our voice, and we’re getting it.”

Spencer, Harrison D-2’s superintendent, agrees that it’s challenging to overcome the negative image of the southeast area of town.

“We really don’t focus on what other people are thinking but on what our families and kids need,” he said. “It’s important for people throughout our community to realize that people are people, and the more we can get across that all people need opportunities, it will make the situation much better.”