A pedestrian walks past shopping carts filled with clothes and trash along Mallard Drive near the Terry Ragan-owned Cedar Creek Club apartments. (Photo by Christian Murdock, The Gazette) 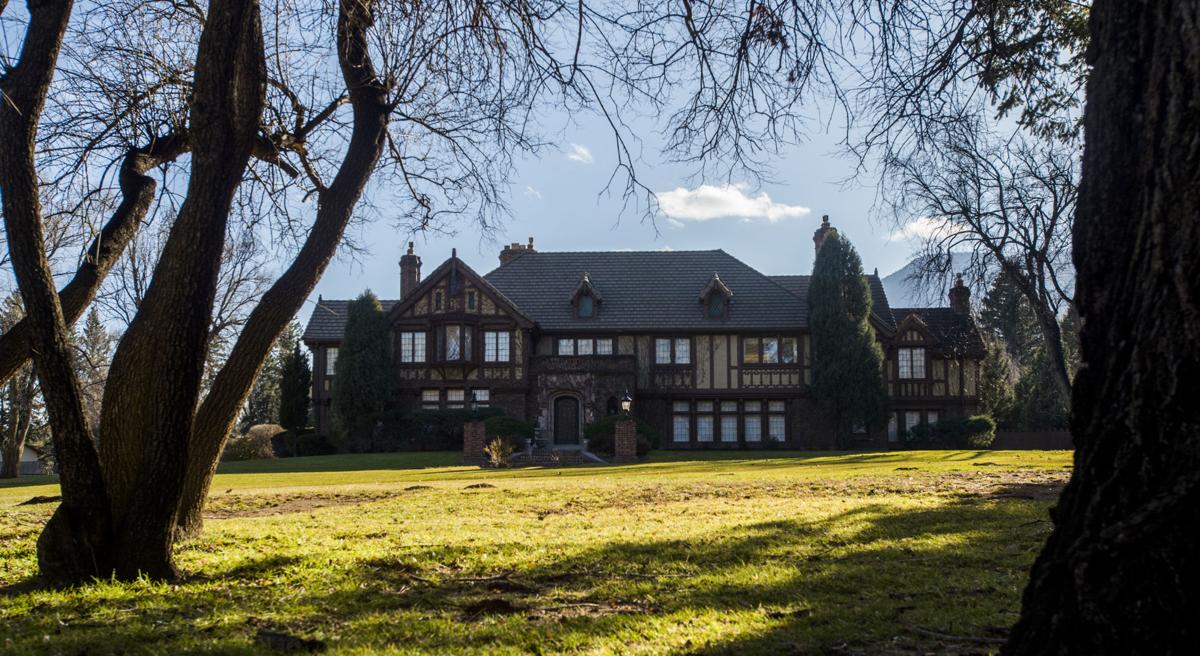 Terry Ragan’s complexes account for more than half of all city code enforcement housing cases and about 80 percent of all housing code violations. Ragan's 9 bedroom house in the Broadmoor neighborhood is valued at $2.1 million according to Zillow. (Photo by Nadav Soroker, The Gazette) 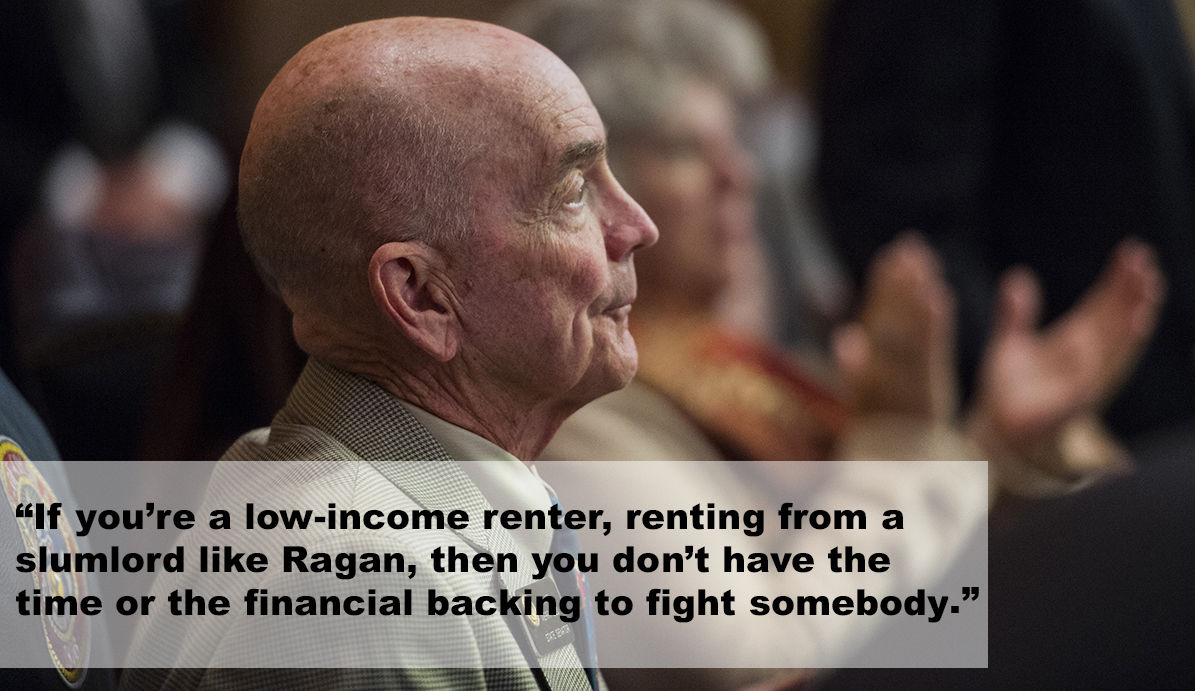 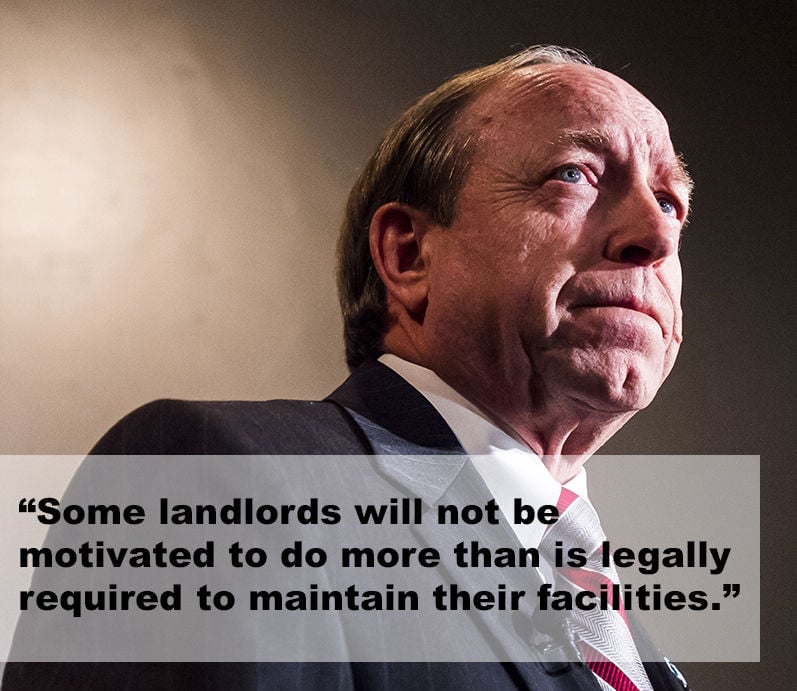 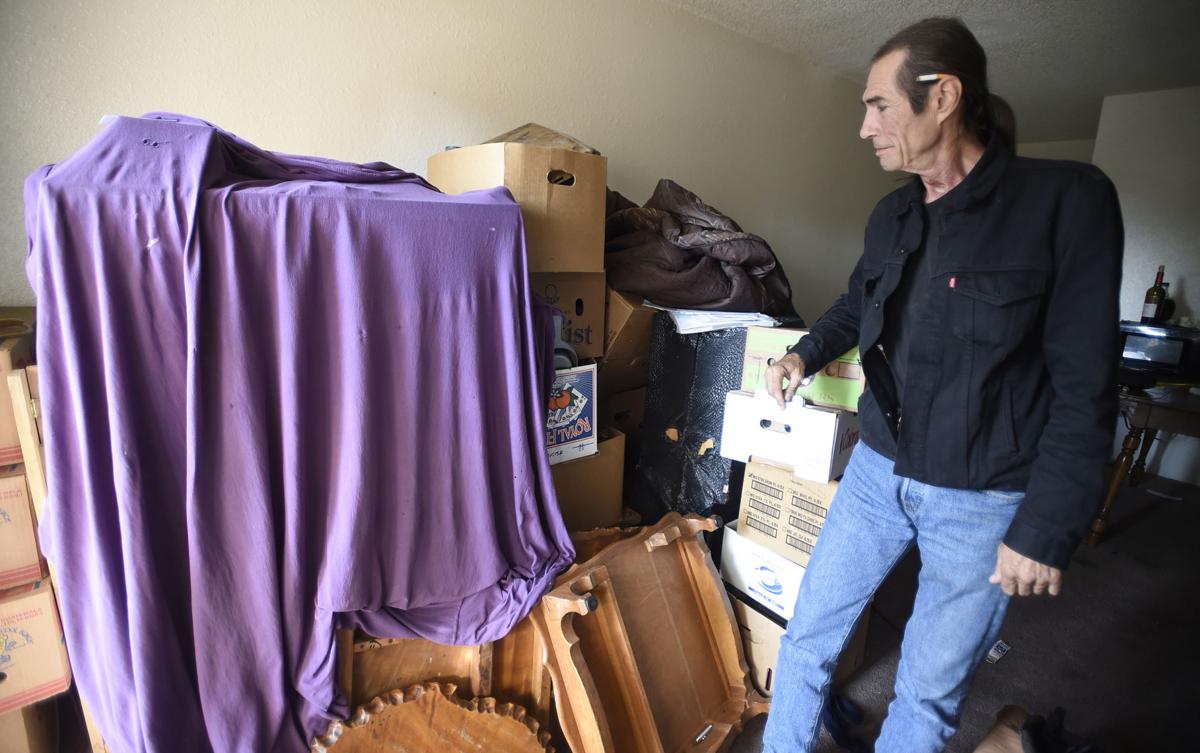 Duwayne Hall keeps nothing in his cabinets or closets at his complex in southeast Colorado Springs, Because of a monthly spraying of all the apartments at his complex, it's too hard for him to take them in and out all the time because of a disability. He leaves everything piled in the middle of his living room. (Photo by Jerilee Bennett, The Gazette) 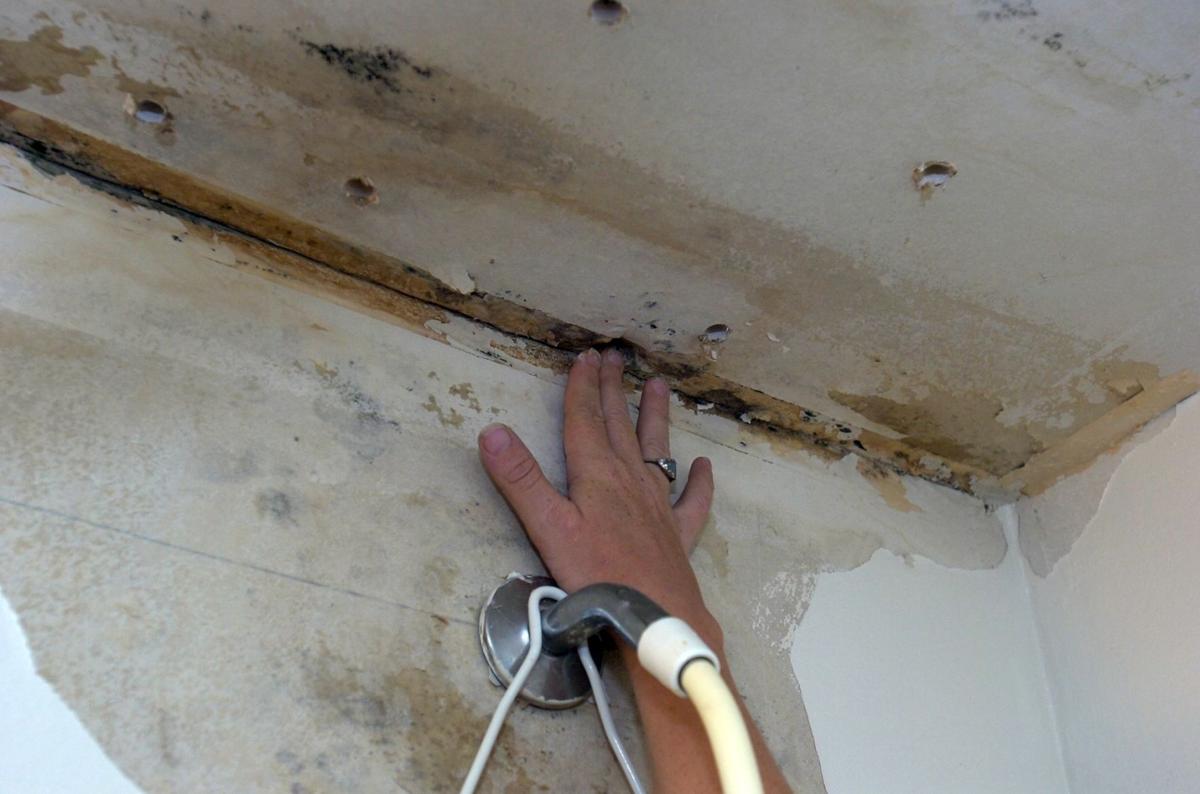 Water damage and mold above the shower head in the bathroom at Pine Creek Village apartment. Holes were drilled so the water could drain into the tub according the resident but the repairs have not solved the problem. Terry Ragan owns the property. (The Gazette file)

In the 15 years since tenants spoke to The Gazette about conditions at Terry Ragan’s apartment complexes, little has changed.

If anything, they’ve gotten worse, according to residents, police and code enforcement.

In 2003, after The Gazette ran a series on the crime, gangs, cockroaches, leaky pipes, mold, maintenance complaints and code violations at Ragan’s complexes, the City Council talked about increasing fines and about cracking down on repeat offenders.

None of that has been done.

Instead, the cash-strapped city cut code enforcement staff by 20 percent in 2009.

The percentage of police calls at Ragan’s properties more than doubled between 2003 and 2016. Ragan’s complexes account for more than half of all city code enforcement housing cases and about 80 percent of all housing code violations.

Ragan’s response is the same as it was 15 years ago: he refused to comment as did his son, Todd Ragan, who now oversees the business’ day-to-day operations.

All but one of Ragan’s properties are in southeast Colorado Springs, where, by the city ’s admission, his complexes fill a need for affordable housing.

While the average rent in town hit a record high of $1,060 last year, rates in Ragan’s apartments start as low as $510 a month.

Background checks are lax — none accept past evictions, but some of his complexes allow certain felony convictions, several apartment representatives confirmed.

Many past and current renters say the low rates and apparent willingness to overlook criminal convictions make Ragan’s apartments appealing to a cross section of low-income renters, out-of-towners, and those with some sort of criminal history.

Ragan’s complexes account for more than half of all city code enforcement housing cases and about 80 percent of all housing code violations.

“Some landlords will not be motivated to do more than is legally required to maintain their facilities,” he said.

All renters, Suthers said, are entitled to a “clean and safe living environment,” adding that is best accomplished by increased competition in the private real estate market, pushing out unsavory landlords or forcing them to improve their properties.

Renters who have lived in Ragan’s apartments for years say rents go up dramatically, sometimes doubling from when they moved in. Many are unable to move because they don’t make enough money or because they are hit by questionable late fees and charges for what they say are made-up offenses, making it impossible to save money. Others can’t find new housing because of their criminal records.

Suthers said if tenants feel their landlords are not abiding by the terms of the lease, they have recourse: the courts.

“If you’re a low-income renter, renting from a slumlord like Ragan, then you don’t have the time or the financial backing to fight somebody,” Merrifield said.

At the state level, apartment owners, lobbyists and fellow Democrats fought against legislation strengthening tenants’ rights, Merrifield said. If change is going to come, he said, much of the work needs to be done at the local level.

“Code enforcement is very lax in the city and renters’ rights are not very strongly supported by city staff, they never have been,” he said. “I think the city needs to step up and support the citizens suffering under those kinds of situations.”

With rents in Colorado Springs hitting record heights, Ragan’s low rates might be considered a service to the city, said Peter Wysocki, the city’s director of planning and community development who oversees code enforcement.

“Providing affordable housing meets a community need, although we certainly would like to see this done professionally and in line with standards of habitability,” city spokeswoman Jamie Fabos said.

Colorado Springs will fall short of the affordable housing it needs in 2019 by 26,000 units, Fabos said.

City Council President Pro Tem Jill Gaebler formerly worked with Greccio Housing, which is dedicated to providing affordable housing to the city’s low-income residents. However, Greccio manages a limited number of units — 527 apartments across 24 properties — leaving many renters with Ragan’s apartments as their only option, Gaebler conceded.

“That’s what we need to change,” she said. “We need to make sure the landlords are honoring the lease and the codes.”

"Code enforcement is very lax in the city and renters' rights are not very strongly supported by city staff, they never have been.  I think the city needs to step up and support the citizens suffering under those kinds of situations."

Hammes said the city only has 13 code enforcement officers.

“It’s tough,” he said. “If I had 19 or 20 (officers) we would be able to do a lot more proactive work and a lot more special projects to improve the appearance of the city.”

Suthers’ draft budget for 2018 allocates $1.55 million for Hammes department, a slight increase from the $1.33 million allocated in 2017. Fabos said code enforcement will not hire any new officers in 2018.

Even with more money and more employees, Hammes said his officers are limited because the city’s codes aren’t as strong as they could be.

The $100 fine for repeat offenses hasn’t changed since 2003, Hammes said. So far this year, Ragan has paid a total of $2,700 in fines, more than any other Colorado Springs landlord, Fabos said.

Even the definition of a repeat offense hasn’t changed since 2003.

With leaky pipes and cockroach infestations as the two most common violations in Ragan’s apartments, Hammes said the issues are systemic. But the city’s officers must treat each dwelling as an individual violation.

An officer can force a complex to hire professional exterminators and treat an apartment but not an entire building, Hammes said.

“So we’re just chasing (the cockroaches) around from apartment to apartment,” he said.

“It’s not serving to change behavior,” he said. “Deeper into the pocketbooks might help.”

Public nuisance laws were slightly updated in 2009 and code violation complaints can now be submitted over the phone rather than limiting the process to those with a computer, but otherwise little has changed since 2003.

A list of known gang members kept by the Colorado Springs Police Department shows dozens — Bloods, Crips and members of the Aryan Brotherhood — all live within Ragan’s walls.

The ordinance would also have required landlords to register their properties with the city, making it easier to keep tabs on problem businesses.

The council voted down Myers’ proposal.

City Council President Richard Skorman, who previously served on the council from 1999 to 2006, said tenant issues took a back seat to keeping the city running and providing basic services, particularly during the recession that began in 2008.

But other council members said the city has failed tenants by not making them and affordable housing a priority.

“The proof is in the pudding,” said Bill Murray. “We have a problem with shiny objects. ... The shiny objects have gotten in the way of empathy, sympathy and common sense.

“We’ve created an environment that ... defaults to developers and big money.”

Murray said if the city was serious about affordable housing and tenants rights it would require developers to set aside 15 percent of new housing developments for lower-income tenants.

But Strand said he wants mold, which can cause chronic coughing and wheezing and skin, eye and throat irritation, addressed. Neither the city nor the state has any laws requiring landlords to clean up mold and Suthers said the city does not currently have the resources for testing. Strand said he is working with the El Paso County Public Health Board to come up with mold regulations by the end of next year, however.

Councilwoman Yolanda Avila, who was elected this spring to a four-year term representing southeast Colorado Springs, said she wants to be a voice on the council for tenants, saying the buck stops with her.

“It’s not going to be another 13 years. It definitely isn’t going to go for another four years,” Avila said.

Updating the definition of a chronic offender and increasing fines might be a good start, Avila said. She also suggested creating a renter’s guide to the city.

Ragan and his complexes also are on the radar of other council members and city health officials, who say they are working on new regulations, although none had a timeline for when they would be ready.

Among them is Councilman Merv Bennett, who said he is familiar with Ragan’s reputation.

Resolving issues with problematic landlords is a priority, Bennett said, though it’s unclear what can be done in the immediate future. The first step, he said, would be discussing the city’s options with the city attorney and mayor’s office.

Bennett said he would support requirements or incentives for developers to include affordable housing in new construction projects. He also supports hiring new code enforcement officers, although there’s no additional funding allocated for that.