Ground zero in New York, the Pentagon in Virginia, and Shanksville, Pennsylvania, hosted memorials with survivors and top U.S. officials in attendance. Lectors read the names of each of the 2,977 people killed in the attacks. STORIES FROM INSIDE THE PENTAGON ON 9/11: 'SAW THE FIREBALL PASS OVER THE TOP OF OUR HEAD'

"As we carry these 20 years forward, I find sustenance in a continuing appreciation for all of those who rose to be more than ordinary people," said Mike Low, the father of Sarah Elizabeth Low, a flight attendant whose plane crashed into the World Trade Center. 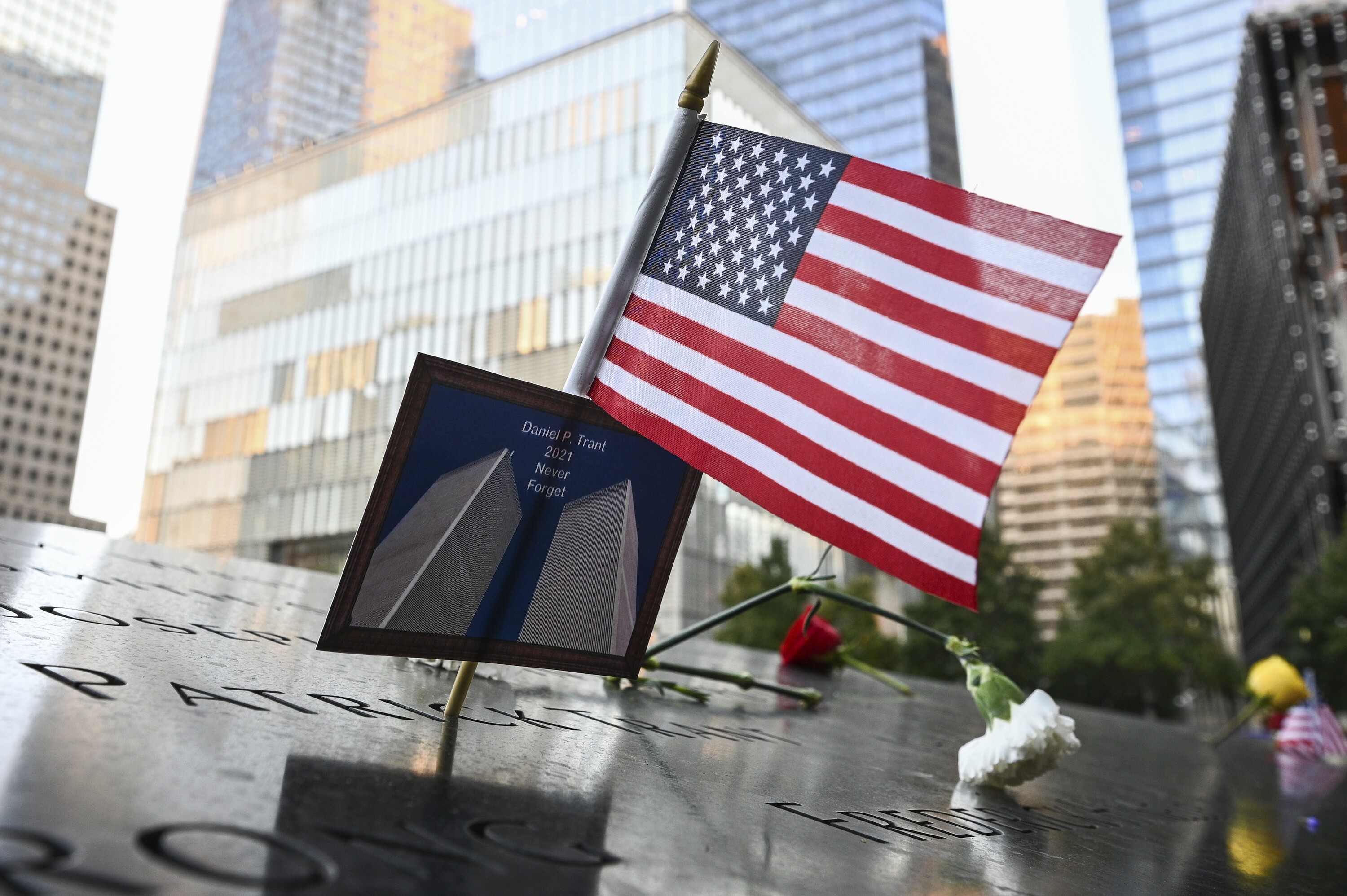 An American flag placed along with a photo of the twin towers and the name Daniel P. Trant, a Cantor Fitzgerald bond trader who died during 9/11, before ceremonies to commemorate the 20th anniversary of the Sept. 11 terrorist attacks on Saturday at the National September 11 Memorial & Museum in New York. (Anthony Behar, Pool Photo via AP)

Biden was also scheduled to visit Shanksville, where Vice President Kamala Harris, former President George W. Bush, and former first lady Laura Bush joined a memorial service Saturday morning remembering those whose hijacked plane crashed into an open field there. Speakers recalled the determination of passengers on United Airlines Flight 93, who charged the cockpit in hopes of regaining control of the airplane, which eventually crashed into the empty field. 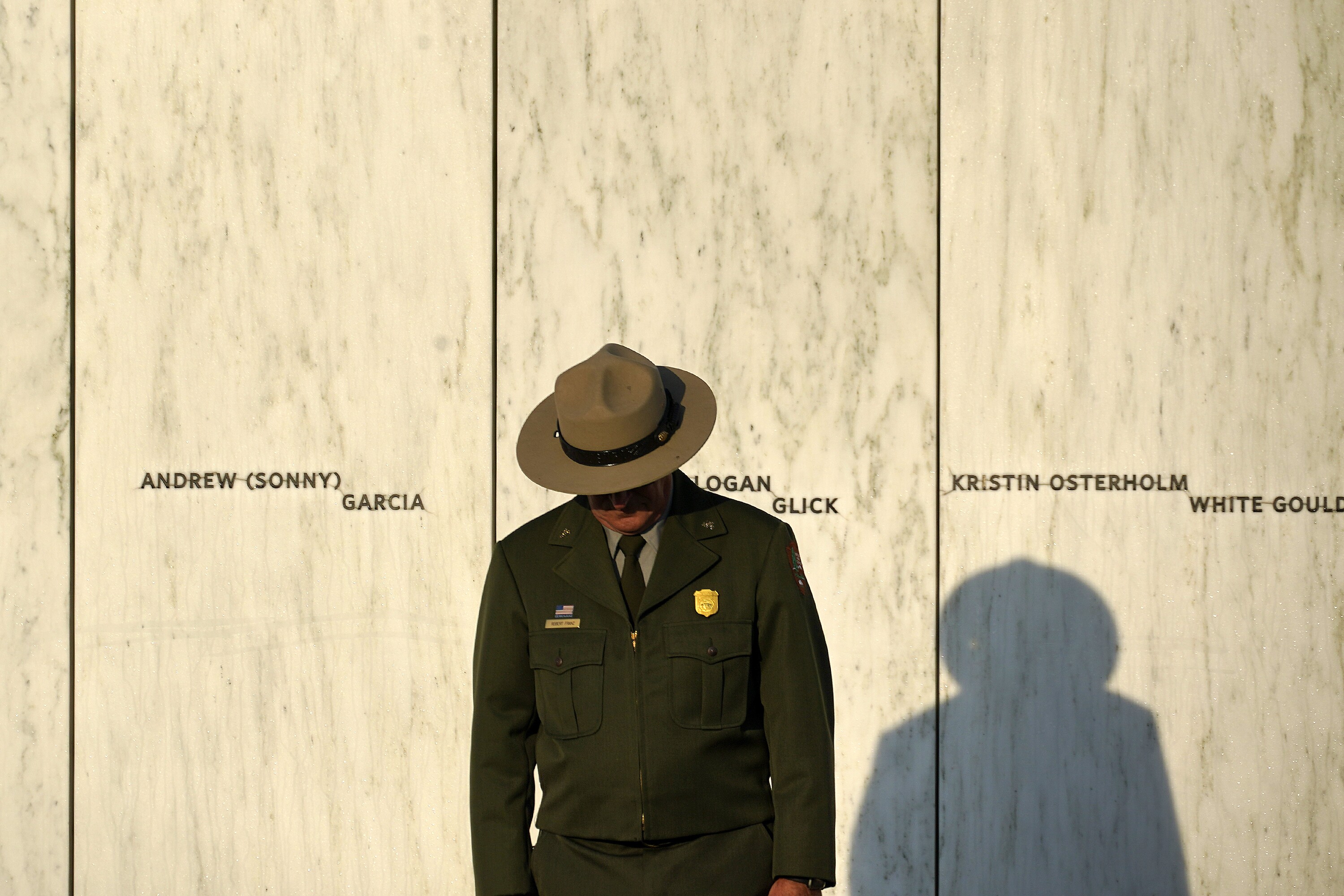 A National Park Service ranger stands in front of the Wall of Names at the Flight 93 National Memorial in Shanksville, Pennsylvania, before a service of remembrance on Saturday as the nation marks the 20th anniversary of the Sept. 11, 2001 attacks. (AP Photo/Gene J. Puskar)

"The passengers and crew members joined together and decided to fight back. In a moment of terrible uncertainty, they were determined to control their fate," said Stephen Clark, the superintendent of the National Park Service's sites in western Pennsylvania. Attendees listen during an observance ceremony at the Pentagon on Saturday on the morning of the 20th anniversary of the terrorist attacks. An American flag is draped over the site of impact at the Pentagon. (AP Photo/Alex Brandon)

In northern Virginia, memorial-goers gathered outside the Pentagon, where American Airlines Flight 77 crashed on 9/11, killing 184 people.

"We must ensure that all our fellow Americans know and understand what happened here on 9/11 and in Manhattan and in Shanksville, Pennsylvania," said Defense Secretary Lloyd Austin, a retired Army general who led troops during the post-9/11 invasion of Iraq. "It is our responsibility to remember, and it is our duty to defend democracy."

Former President Donald Trump, a New York native, said he will visit ground zero in Manhattan on Saturday to mark the 20th anniversary.

As the 20th anniversary of 9/11 approaches, Colorado Politics asked state political leaders where they were that day and how they felt.