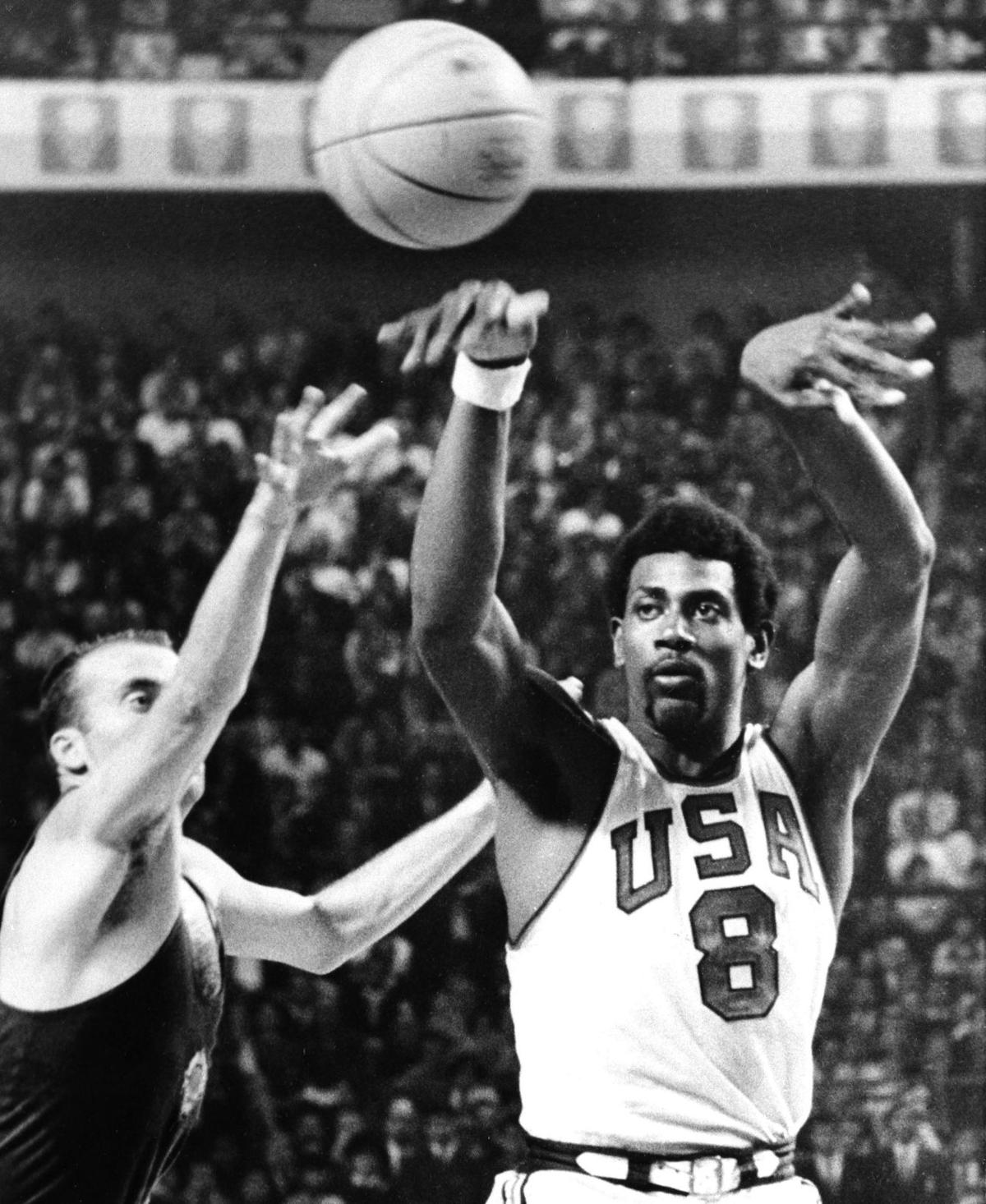 With his eye on the basket, Spencer Haywood (8) of the U.S. Olympic basketball team, gets off a shot as a player from the Yugoslavia team vainly tries to interfere in final Olympic action in Mexico City, Oct. 26, 1968. The U.S. won the game, 65-50 and took home the gold medal. The Yugoslavian player is unidentified. (AP Photo) 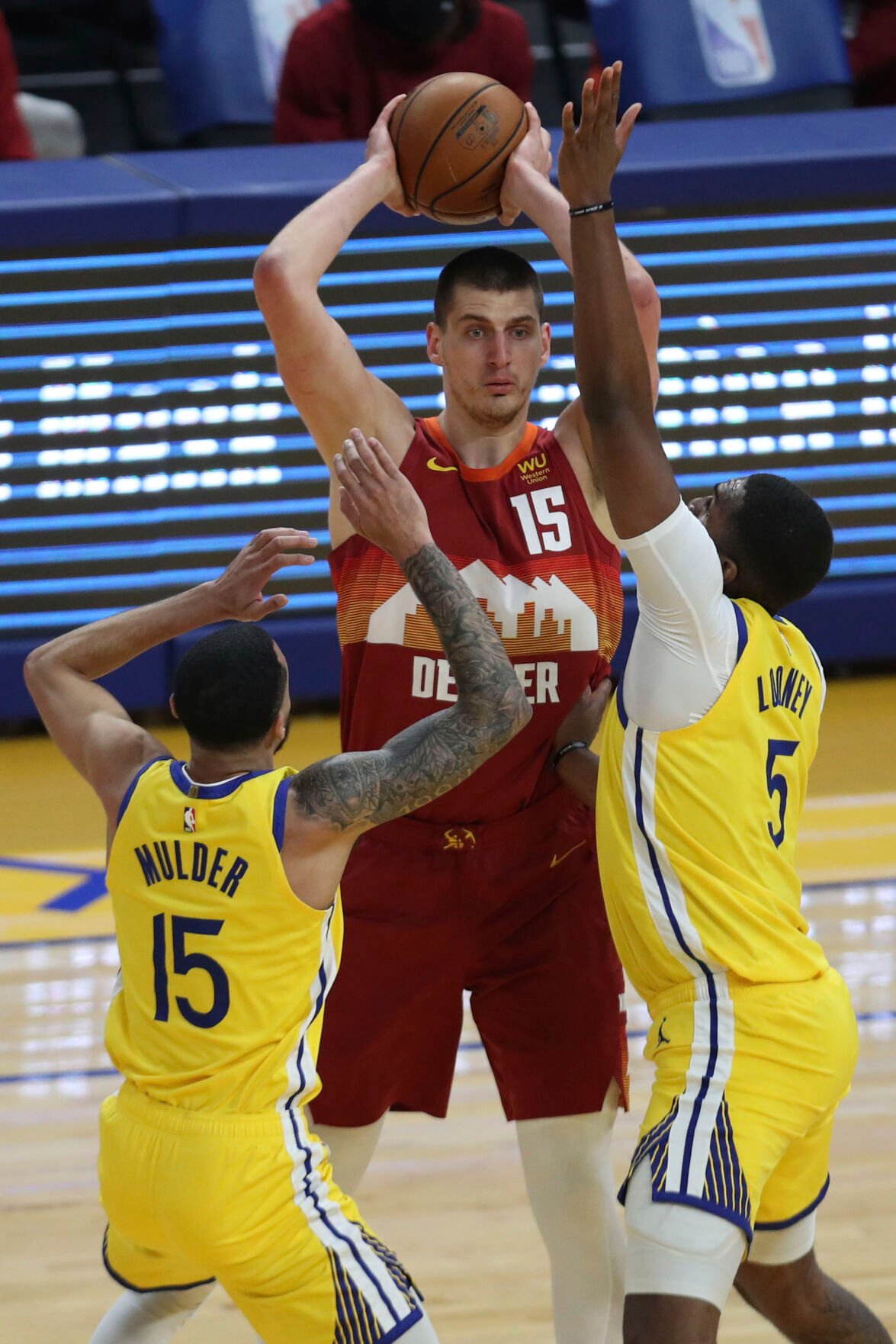 With his eye on the basket, Spencer Haywood (8) of the U.S. Olympic basketball team, gets off a shot as a player from the Yugoslavia team vainly tries to interfere in final Olympic action in Mexico City, Oct. 26, 1968. The U.S. won the game, 65-50 and took home the gold medal. The Yugoslavian player is unidentified. (AP Photo)

Separated by 51 years, The Stallion and The Joker are MVPs.

Nikola Jokic is producing in 2020-21 the greatest season in Denver pro basketball history since Spencer Haywood’s 1969-70.

The Denver Nuggets’ center properly has become the overwhelming choice for the NBA’s Most Valuable Player award, according to ESPN’s most recent straw survey of 101 media members who cover the league. He received 90 first-place votes to distance himself from Joel Embiid and Giannis Antetokounmpo and the other rich and famous megastars.

More than a half century ago Haywood became the runaway MVP winner for the ABA MVP with 17 of 20 first-place votes to lay waste to Rick Barry, and the Denver Rockets’ rookie certainly had a superior season over NBA MVP leaders Willis Reed, Jerry West and Kareem Abdul-Jabbar.

It’s been a while in between the best and the brightest.

David Thompson finished second in the ABA voting in ’75 and third two years later in the NBA. Alex English was sixth and eighth in the NBA, and Carmelo Anthony ranked sixth before demanding to be traded.

But nobody truly has touched Haywood in his sole season with the Rockets or Jokic in his sixth year with the Nuggets.

As a 20-year-old center Haywood averaged 30 points and 19.5 rebounds, with 2.3 assists, playing 45.3 minutes per game. He scored 40-plus in nine games and, in his final regular-season game in Denver, before a sellout crowd of at the downtown Auditorium Arena, finished with a Mile high of 59 points. Spencer averaged more than 40 points in one eight-game span and had another game with 39 points and 28 rebounds. Teammate Byron Beck nicknamed him “The Stallion.’’

Having seen Haywood play in 1970 and Jokic today, their 74 combined points vs. New Orleans teams amazes.

Both certainly have been worth more than their salaries — Haywood with a six-year deal with the Rockets announced as $1.9 million, but actually valued at about $400,000, and Jokic with a five-year $147 million contract with the Nuggets.

Haywood was born and raised in Silver City, Miss., and Jokic in Sombor, Serbia. They learned the game 5,500 miles and five decades apart, but each eventually came to Colorado.

Interestingly enough, Jokic will become the fifth player from another country for the four major teams in Colorado to win a league MVP. The others were Canadians Joe Sakic, Patrick Roy and Larry Walker, and Swede Peter Forsberg. Sakic won both the regular-season and playoff awards; Forsberg was a regular-season MVP and Roy a postseason MVP, and Walker won the National League MVP.

Haywood picked cotton for $4 a day as a kid about halfway between Memphis and New Orleans. He moved to Detroit in 1964, and his high school coach persuaded Spencer to attend college to play basketball at Trinidad Junior College in southern Colorado.

The teenager was selected to the U.S. Olympic for 1968 and became the leading scorer (and shot 70 percent) as the Americans won gold. The 21-year-old Jokic, who played in European leagues as a teenager, was Serbia’s most outstanding player on the 2016 Olympic team, which ended up with a silver medal after losing to the Americans.

Haywood bitterly left the Rockets after the one season because he believed the ownership — Ringsby Rocket Trucking System — had conned him with a contract that wouldn’t pay off until he would reach 50, and then only if he worked for the company full time. Courts sided with Haywood, who had signed with the SuperSonics and ultimately, after overcoming cocaine addiction, became a Hall of Famer in 2015.

That was the same year Jokic signed a four-year pact with the Nuggets and played in the Summer League in Las Vegas.

The MVPs of 1970 and 2021 don’t know each other and had no reason to meet then even though Spencer lives in Vegas.

They do now. The Nuggets should invite Haywood back next season for the MVP presentation to Jokic before a game. The Joker and The Stallion could be acknowledged appropriately.

Woody Paige: Jamal Murray's injury is a shame, and will cost Denver Nuggets in playoffs