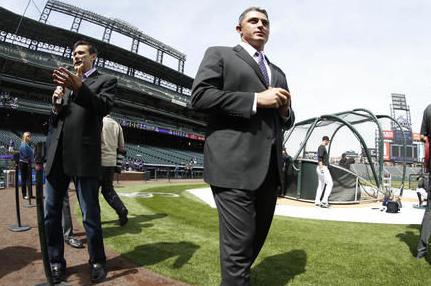 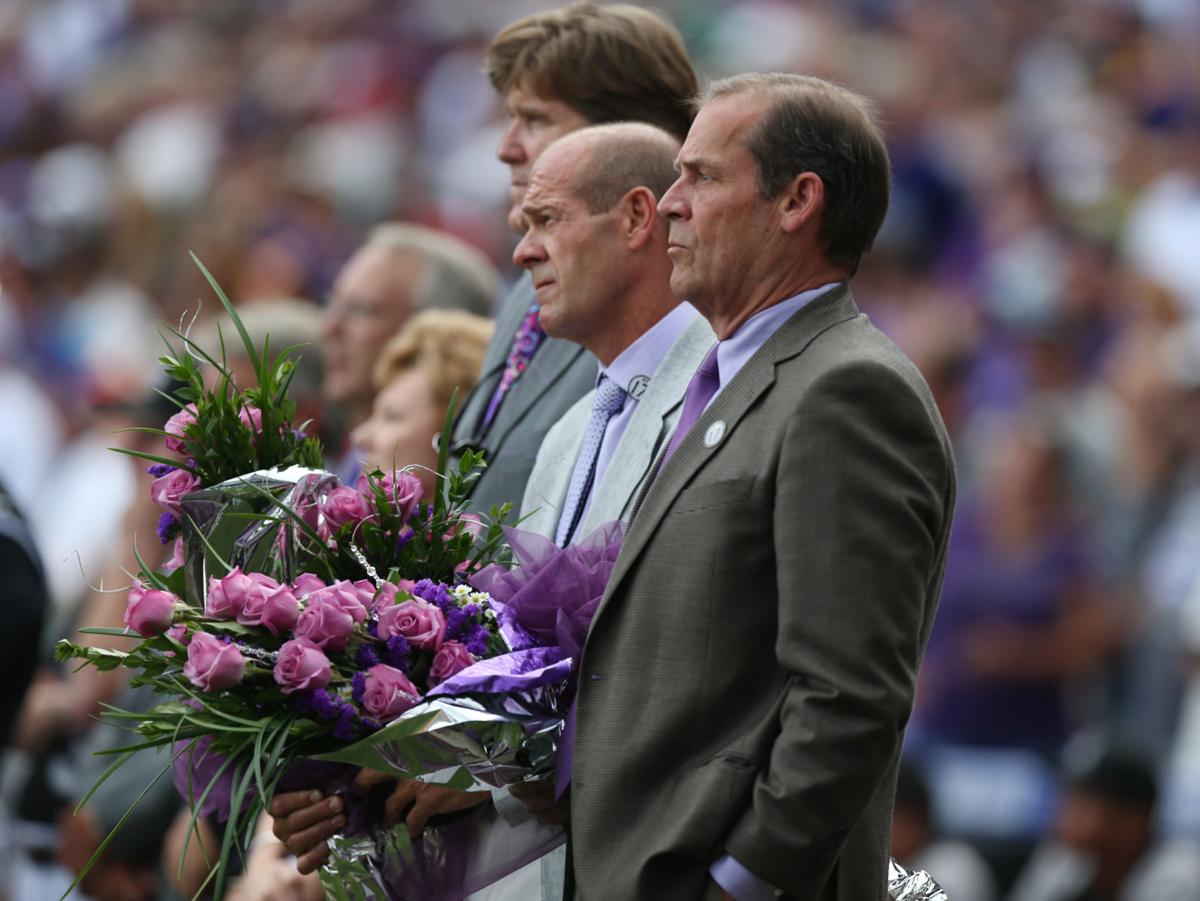 From front, Colorado Rockies co-owners Dick and Charlie Monfort hold bouquets of flowers for presentation to Christy Helton, wife of retired Rockies first baseman Todd Helton, as the team's chief operating officer, Greg Feasel, looks on during a ceremony to retire Helton's number before the Rockies host the Cincinnati Reds in a baseball game in Denver on Aug. 17, 2014. (AP Photo/David Zalubowski) 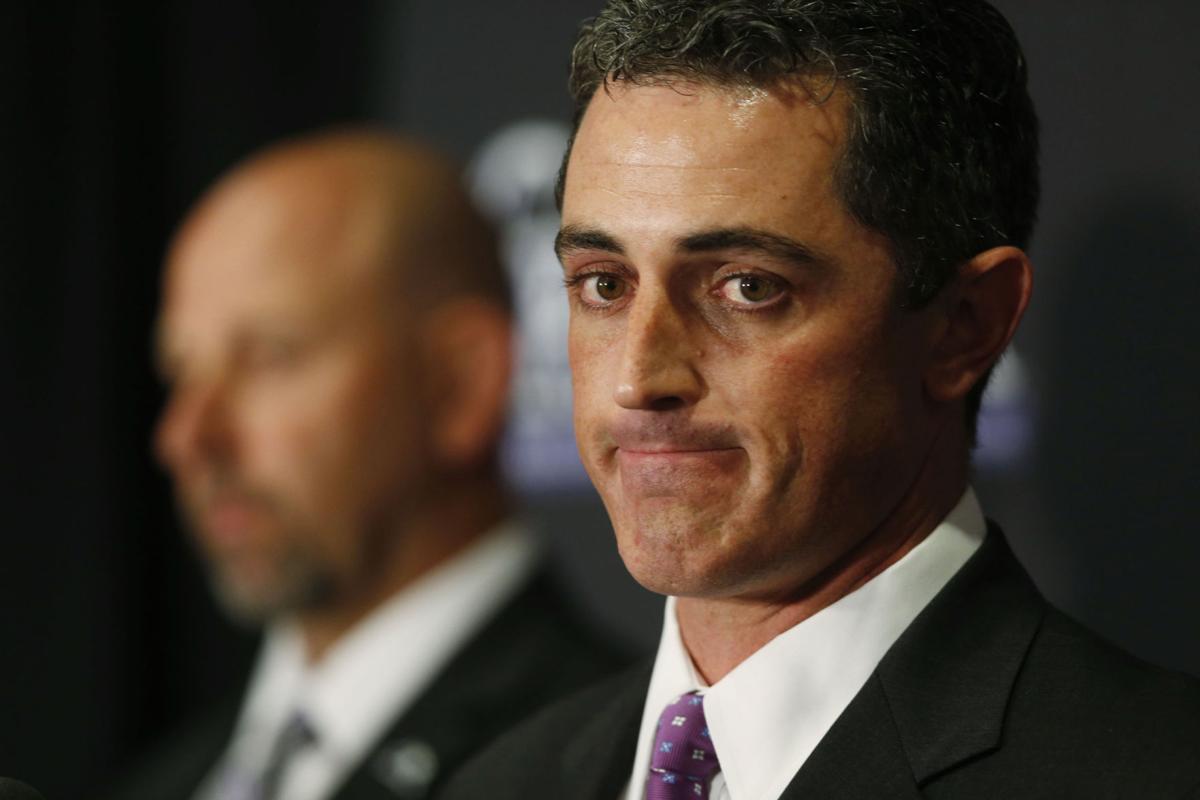 Colorado Rockies new general manager Jeff Bridich responds to questions during news conference to announce his promotion to the top job in Denver on Wenesday, Oct. 8, 2014. Bridich, who replaces Dan O'Dowd, has served in a leadership role in the Rockies' baseball operations for 10 years, most recently as the team's senior director of player development. (AP Photo/David Zalubowski) 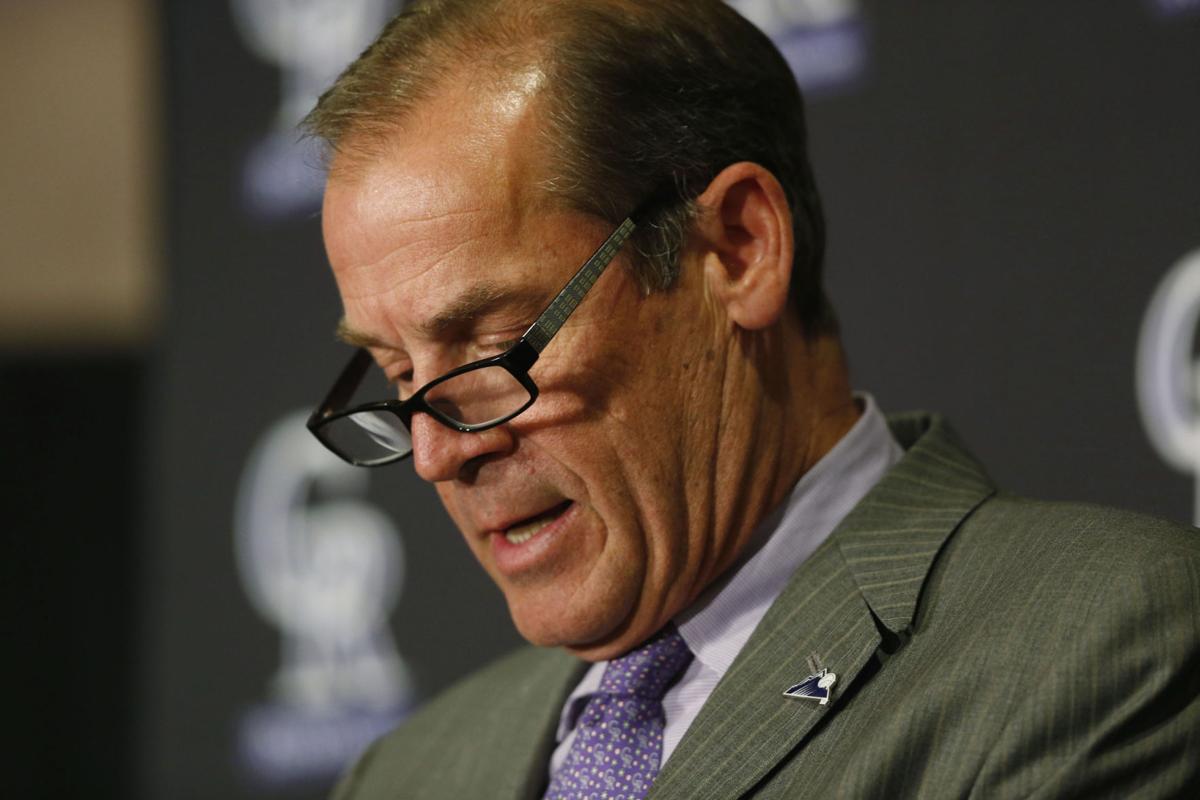 Colorado Rockies new general manager Jeff Bridich responds to questions during news conference to announce his promotion to the top job in Denver on Wenesday, Oct. 8, 2014. Bridich, who replaces Dan O'Dowd, has served in a leadership role in the Rockies' baseball operations for 10 years, most recently as the team's senior director of player development. (AP Photo/David Zalubowski)

On Feb. 2, toward the end of a press conference in the aftermath of the most ruinous trade in Denver sports history, I asked Rockies’ majority owner Dick Monfort if he had considered firing Jeff Bridich as executive vice president/general manager and himself as CEO/de facto president of the franchise.

On Monday morning both Roxheads are out of the team’s two direct policymaking baseball management positions.

Jeff Bridich's best and worst moves with the Rockies

Dick does remain as one of the worst owners in Major League Baseball, but Jeff is finished as one the foulest GMs in the game.

In what was categorized as “a mutual agreement’’ Bridich resigned or was fired. Also, Monfort has resigned or fired himself and named his successor as COO/club president — loyal lackey Greg Feasel.

Monfort, who did not speak Monday, may have violated baseball’s important Selig Rule and could be suspended or fined heavily.

Former commissioner Bud Selig instituted a diversity decree, still in force, that teams must interview minority candidates before selecting anyone to the franchise’s five most important positions — including manager, general manager and president.

There is no proof, or explanation, that Monfort interviewed others for the open president’s job. In fact, the Rockies had no president-in-title since Keli McGregor’s death in 2010. Monfort has acted in the role since.

Current commissioner Rob Manfred, who has made efforts recently to strengthen the Selig Rule, certainly will investigate Monfort’s decision to elevate Feasel, who has no past in the Rockies’ actual baseball operations. He is the longtime buddy of both Dick and Charlie Monfort and worked strictly on the franchise’s business side.

Now, Feasel will be the CEO and president and likely will be a major player in choosing the temporary general manager the Rockies promise and a new general manager in the next offseason.

Will a minority or a woman be a serious contender for the interim or permanent GM position in the Rockies’ organization. Probably not.

Of the 15 executives and officers of the Rockies whose photos and biographies appear in the franchise’s front-office directory, 11 are white, three are women and one is Latino.

All three general managers in Rockies’ history were white, and of the club’s seven managers, one, Don Baylor, was African-American.

The Rockies have to think about Billy Owens, the Athletics assistant general manager/director of player personnel. He is among the best talent evaluators and analytic specialists in baseball, has worked under “Moneyball’’ Bill Beane for 22 seasons, spent his playing career in the minors and was a finalist for GM jobs with the Angels and, earlier this year, the Mets. Executives and players throughout baseball love Owens, and he’s an African-American whose club has been in the postseason six of the past nine years — despite being, as Monfort believes, a dreaded “mid-market’’ franchise.

Another baseball expert, which the Rockies are lacking, is Cardinals’ VP and general manager Mike Girsch, who has served as No. 2 to president of baseball operations John Mozeliak. The two pulled off the steal of a deal in the offseason — getting Nolan Arenado from the Rockies for five unknown players and approximately $50 million. Girsch is white.

The Rockies’ announcements Monday primarily were positive. Bridich should have “stepped down,’’ and Monfort should step away from baseball administration. During the infamous Zoom conference call, Monfort admitted he was “a fan.’’ The Rockies don’t need fans or sports writers overseeing a public trust that has lost the trust of the public.

But Monfort shouldn’t have made a snap judgment on Feasel, a suit who belongs in an office handling concessions and the party deck.

Even Bridich admitted in a statement that the Rockies should go in another direction, although he said Monfort has “a clear vision for the Rockies.’’ Monfort’s vision always is blurred.

The Rockies have the most dreadful record in the National League and one of the two most terrible minor-league systems in all of baseball.

At least, though, ding, dong, the Bridich is gone.

When Jeff Bridich took over personnel decisions for the Rockies prior to the 2015 season, the team had Nolan Arenado, Troy Tulowitzki, DJ LeMa…