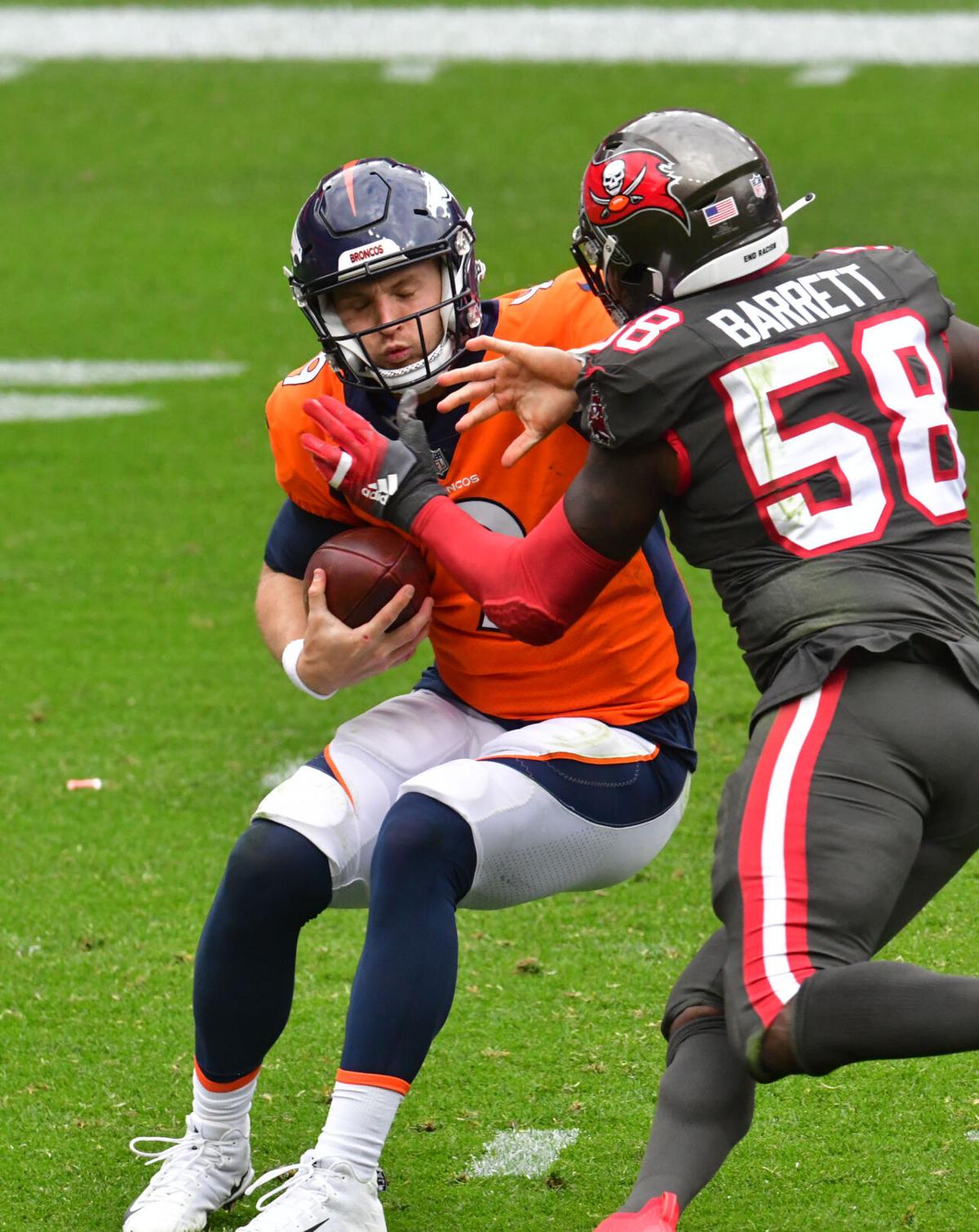 Broncos quarterback Jeff Driskel is sacked by Buccaneers linebacker Shaquil Barrett in the second quarter of a game. The Broncos were defeated by the Tampa Bay Buccaneers 28-10 at Empower Field at Mile High on Sunday, Sept. 27, 2020. (Photo by Jerilee Bennett, The Gazette) 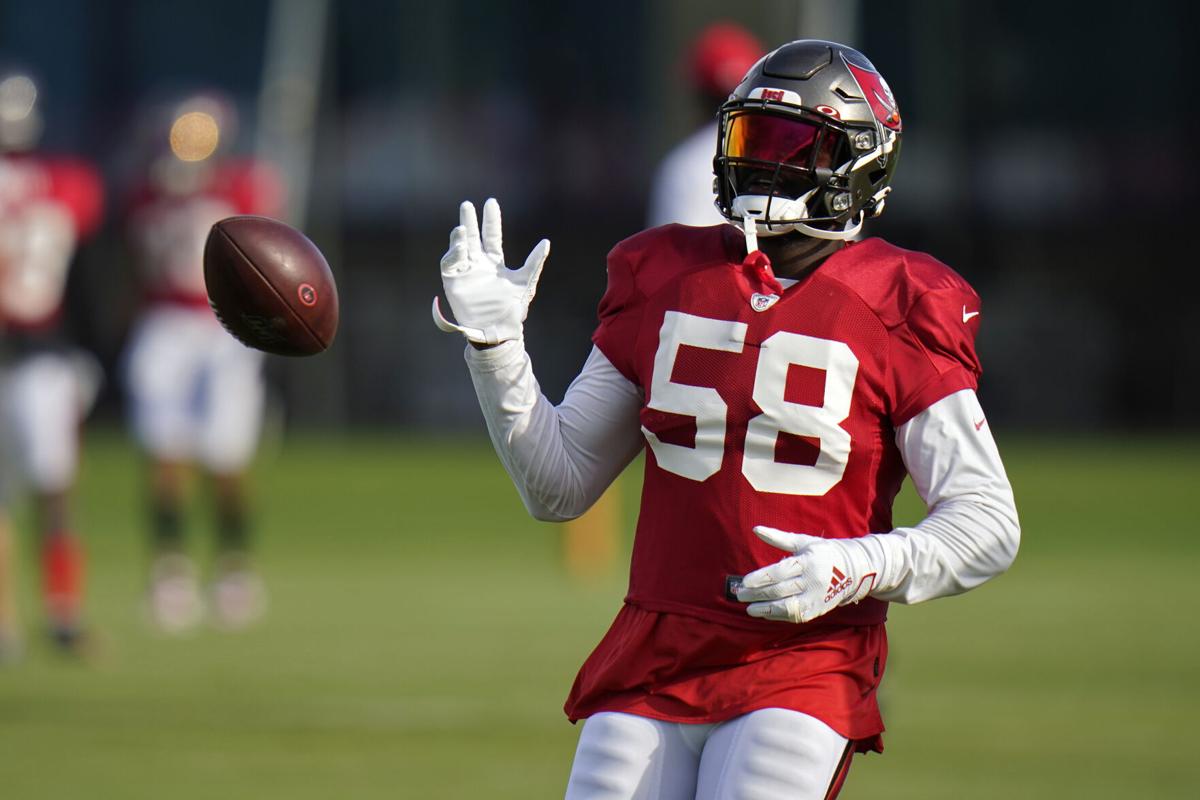 Tampa Bay linebacker Shaquil Barrett, who played for the Denver Broncos and Colorado State, knocks the ball away during training camp Aug. 18 in Tampa, Fla.

Broncos quarterback Jeff Driskel is sacked by Buccaneers linebacker Shaquil Barrett in the second quarter of a game. The Broncos were defeated by the Tampa Bay Buccaneers 28-10 at Empower Field at Mile High on Sunday, Sept. 27, 2020. (Photo by Jerilee Bennett, The Gazette)

Tampa Bay linebacker Shaquil Barrett, who played for the Denver Broncos and Colorado State, knocks the ball away during training camp Aug. 18 in Tampa, Fla.

Not even 5,700 Broncos in-person fanatics, and not even Cartman, Stan, Eric, and 1,800 other residents of South Park and, especially, not even Kenny could save the home team Sunday.

“Oh my God, they killed the Broncos’’ would be the line on the animated series based on a county in Colorado 85 miles southwest of the stadium @Mile High.

The Broncos played like cardboard cutout cartoon characters against the Buccaneers, as if they had been created by Trey Parker and Matt Stone, who grew up in Denver as Broncos fans and have included the Broncos in 23 episodes since the series originated in 1997.

Remember 1997. That was the season the Broncos won their first Super Bowl. Such a team was long ago and far away. This team is not close.

After they lost rather routinely 28-10 to Tom Brady and his new team, the Buccaneers, and dropped to 0-3, the same record of a year ago, Broncos players talked about forgetting this game and getting ready quickly for the next in New York against the equally inept Jets.

“Let’s get back to playing football,’’ said Shelby Harris, one of the few striking standouts on the field for the Broncos Sunday. “In my mind we’re going to turn this around.’’

They may settle for Fairplay, the real town in Park County, rather than bad play.

Finally, late in the fourth quarter, coach Vic Fangio did a mercy act for quarterback Jeff Driskel, replacing the replacement with Brett Rypien, another in the extensive list of guys who have tried and failed since the retirement of You Know Who. Rypien was racing the Broncos down the field until he threw an interception at the end zone.

Tom Brady arrived at the game with a losing record vs. only one team in the NFL. Scratch that mark. He is now tied at 9-9 vs. the Broncos. He brought along former and current sidekick Rob Gronkowski, and they combined on six connections for 48 yards. However, the rarely touched Brady, en route to Canton, Ohio, hit eight different targeted Bucs and finished with 25 completions on 38 passes for just 3 yards shy of 300 yards and three touchdowns without an interception.

Driskel, whose starting stint will be short, threw a touchdown and a pick — and was treated like London during the World War II blitz. He now has been sacked 11 times in less than two full games. He was the victim of a Shaq attack. Former Broncos edge rusher Shaq Barrett, who wasn’t wanted here anymore and turned into an All-Pro in Tampa, got to Driskel twice, including once for a safety.

This wasn’t much of a game after the Bucs blocked a punt and scored first, realizing they didn’t have to score often.

The Broncos have totaled 45 points in three games (two at home), averaging 15 per, typical of what’s been going on over, and over, four lousy seasons.

“We got 13 more games’’ was the rallying cry. But Fangio said the focus must be on one game — in New Jersey. A month ago Fangio was a happy camper at Dove Valley. However, the Broncos are sad-sackers now, and Fangio is hearing the howling of the wolves, with just cause.

The running game was nonexistent without Phillip Lindsay and with Melvin Gordon III gaining a measly 26 yards on eight carries. The Broncos gave up on rushing and could have surrendered the passing game, which produced 229 mostly useless yards.

The offensive line is a mesh unit. Tight end was supposed to be a strength, but it’s such a weak link that two of them were declared healthy inactives and Noah Fant dropped two passes, and another of the 10 flung his way flew about 10 feet over his head.

The Broncos were not a pleasant sight for those lucky (?) random fans who “won the lottery’’ to attend the game.

And the citizenry of South Park, including Kenny and Cartman, were silent and cut out early.

Paul Klee: Not even South Park cutouts are laughing as Broncos devolve into 0-3 comedy

The Broncos franchise is a cutout of what it used to be, columnist Paul Klee writes. From a distance they look similar, but they are imposters. The Tampa Bay Bucs tore through the Broncos 28-10 as if they were made of cardboard. The Broncos' record is 0-3 for the second straight season.