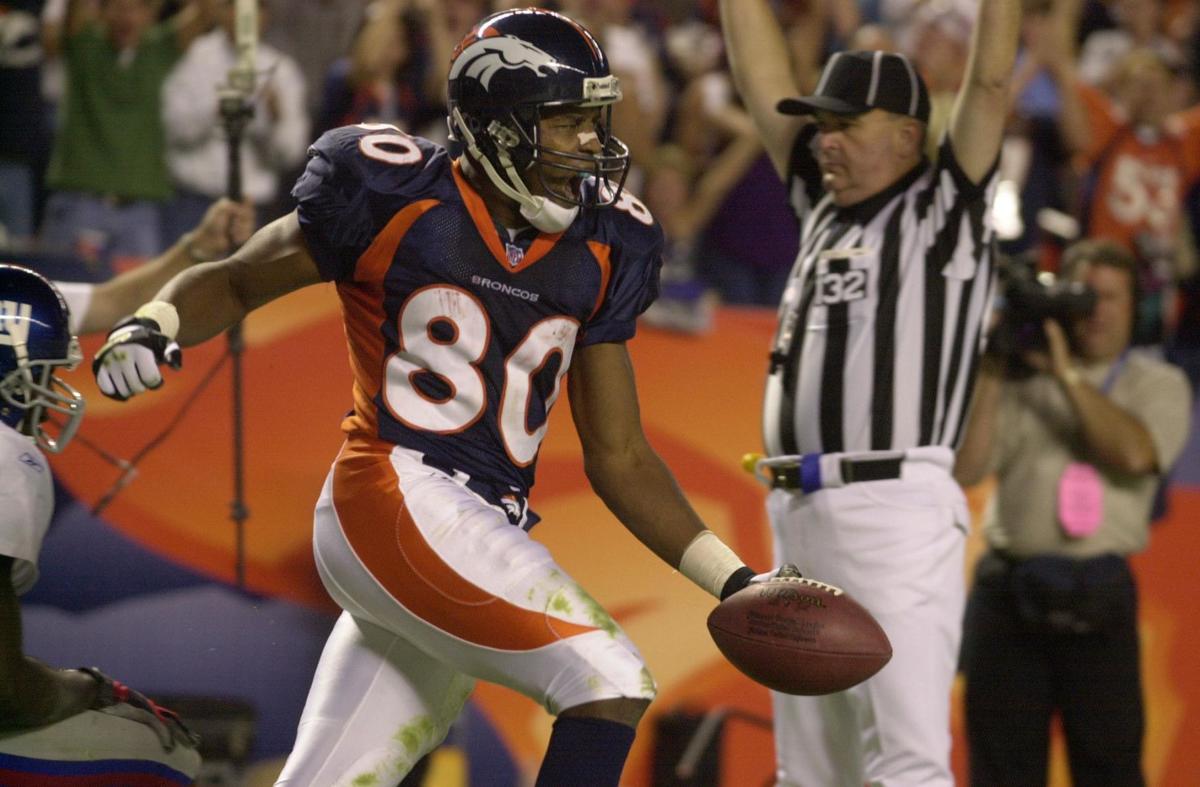 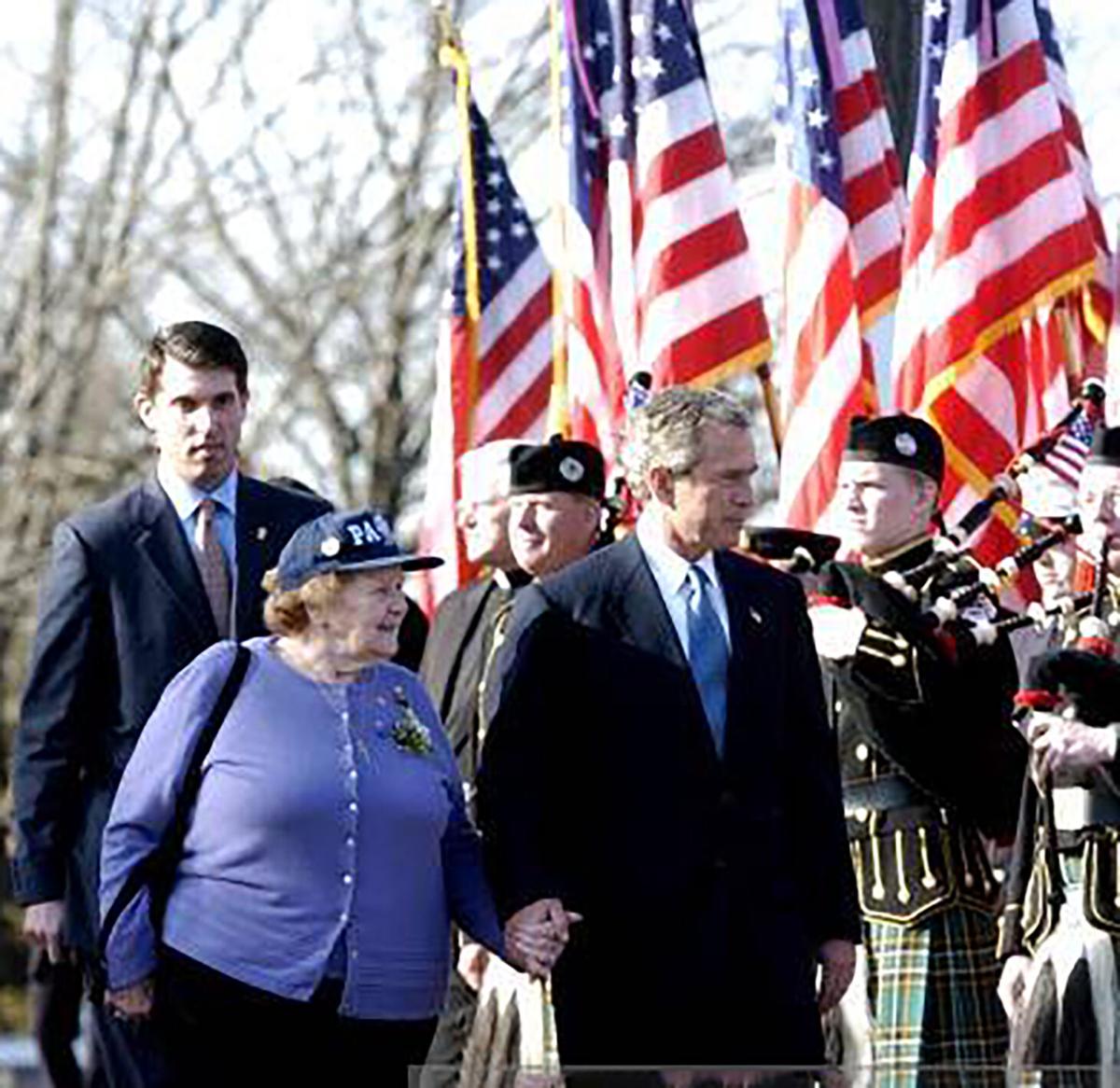 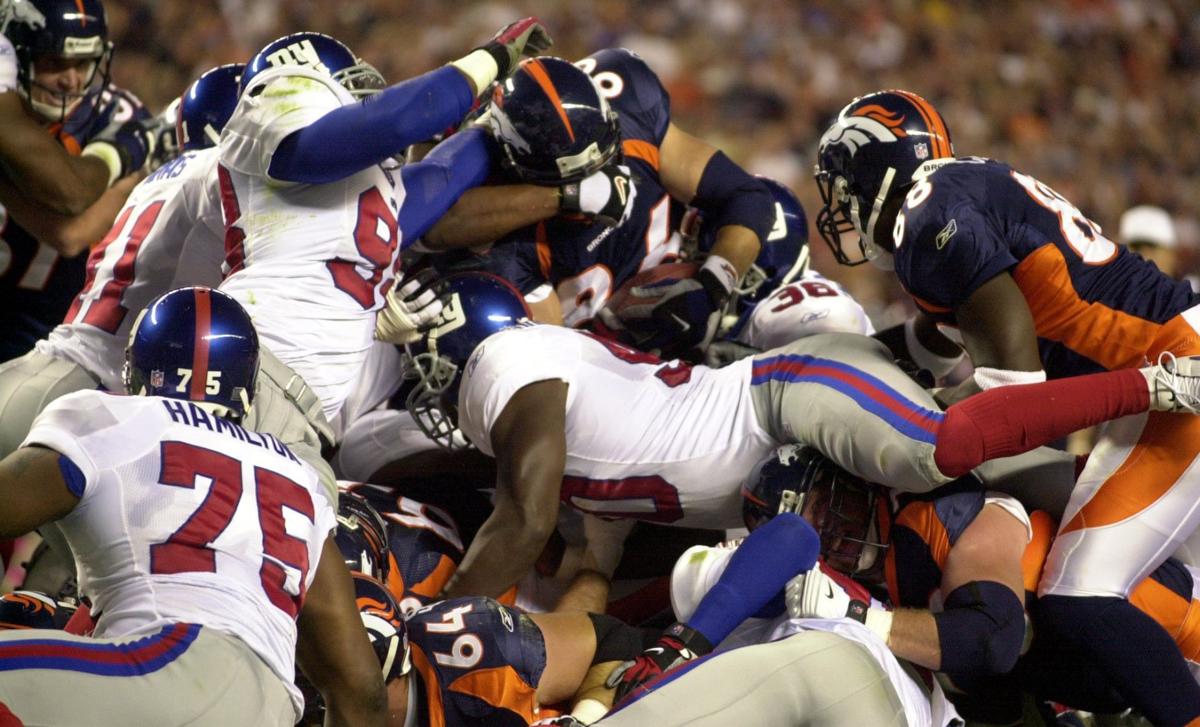 Bronco fullback Patrick Hape is denied at the goal line by the Giants defense in the first quarter of the opening regular season game at Invesco Field at Mile Hi Monday night, September 10, 2001. Jerilee Bennett photo

Bronco fullback Patrick Hape is denied at the goal line by the Giants defense in the first quarter of the opening regular season game at Invesco Field at Mile Hi Monday night, September 10, 2001. Jerilee Bennett photo

Remember a time in September.

The last game of the first week would be the last NFL game until Sept. 23.

Twenty years later, the Broncos open the season Sunday, Sept. 12, against the Giants in MetLife Stadium.

Three seasons the Giants have been responsible for ruinous moments in Broncos team history – the last in 2017 in a 23-10 outcome that was the portent of the Denver franchise’s descension into pro football’s depths of despair.

The Broncos also lost Super Bowl XXI to the Giants, 39-10, and the Giants halted the Broncos league-tying record of 18 consecutive victories (over two seasons) in 1998.

But, the 2001’s game morning after turned into tragic and memorable mourning, and 9/11 will live in infamy, too, forever.

I wrote that day: “Amid the fire and smoke and rubble and chaos as the Twin Towers of the World Trade Center collapsed, Miss Liberty still held her head high. But there were tears in her eyes. And the world cries with her.’’

The night before in Colorado, the Broncos, winners of Super Bowls in the 1997-98 seasons and losers to the Ravens in the playoffs in 2000, and the Giants, who reached the Super Bowl the previous year and fell to those Ravens, began as Super Bowl contenders again.

Fassel once asked me to support his candidacy for the Broncos’ head coaching job if Shanahan declined an offer. Instead, they were coaching against each other.

The Broncos won that celebratory night 31-20 as Griese threw for 330 yards and three touchdowns; Davis rushed for 101 yards, and Smith had nine catches for 115 yards and McCaffrey six for 94 midway of the third quarter when he suffered a season-ending devastating broken leg.

A subdued midnight flight carrying the Giants home to Newark, N.J., landed at 6 a.m., and the team filed past the adjoining gate that had a scheduled flight departing soon for San Francisco. The players were off for the day, but Fassel and his staff bused to the Giants’ complex at the Meadowlands to prepare a game plan for the Packers.

The Giants learned two airplanes hijacked by terrorists struck the World Trade Center twin towers. Another plane smashed into the Pentagon. A fourth would dive into a field in Pennsylvania. It was United Flight 93 which sat at the gate next to the Giants’ charter.

The United States had turned upside down.

I finished a column about the football game about the same time the Giants flew out of Denver. Seven hours later I was writing a column about the most catastrophic event in American history since Pearl Harbor. My employer, The Denver Post, assigned me to go to New York to cover the horrific tragedy, and I sneaked down two nights to Ground Zero. I called Jim Fassel from there.

My friend Jim told me he climbed to the top deck of Giants Stadium on Sept. 11 and watched the smoke rising from the cavity where the World Trade Center had been the tallest, most gleaming presence in the Manhattan skyline early that morning.

The Giants received a phone call from a Giants fan, husband and father of three who worked near the top of one of the towers. He hadn’t died because he had traveled to the Denver for the game.

“None of us will get over this,’’ Fassel said.

Psychologically scarred, to this day, like Fassel and everyone else, I returned to covering football when the Broncos resumed playing in Phoenix and won 38-17. But the Broncos, with an 8-8 record, and the Giants, at 7-9, didn’t challenge for the Super Bowl that season. Instead, I watched the Patriots and the Rams in the New Orleans Superdome.

Studesville would be named the Broncos’ interim head coach in 2010, then was followed by Fox, who was the head coach for four seasons (and returned to New York for Super Bowl 48). McCaffrey is the head coach at Northern Colorado, and Sean Payton became the Saints’ coach and Garrett the Cowboys’ coach. Griese, who produced his best Broncos’ performance ever on Monday night, Sept. 10, 2001, is now the analyst on every Monday Night Football game, and Davis is in the Hall of Fame, and Smith should be.

Fassel died of a heart attack in June, Gibbs of a stroke in July.

I moved to work in New York City in 2004 and often revisited Ground Zero, and one day read the names of all the victims – including Robert L. Cruikshank, who lived in retirement in Beaver Creek before being lured to New York to serve as temporary executive vice president for an investment company. I interviewed his wife Marianne in their Upper East Side apartment when she didn’t know if he still was alive. I had to tell her the 64-year-old Cruikshank died on the 92ndfloor of the North Tower. He was one of 30 men, women and children with Colorado connections who lost their lives with more than 3,000 others (and 6,000 were injured) at the three sites.

Sunday is a football game.

On this day we must all remember a day in September.