Gov. Jared Polis last week did something no other state in the country has done, clearing the way for anyone over 18 years old to get a booster shot. 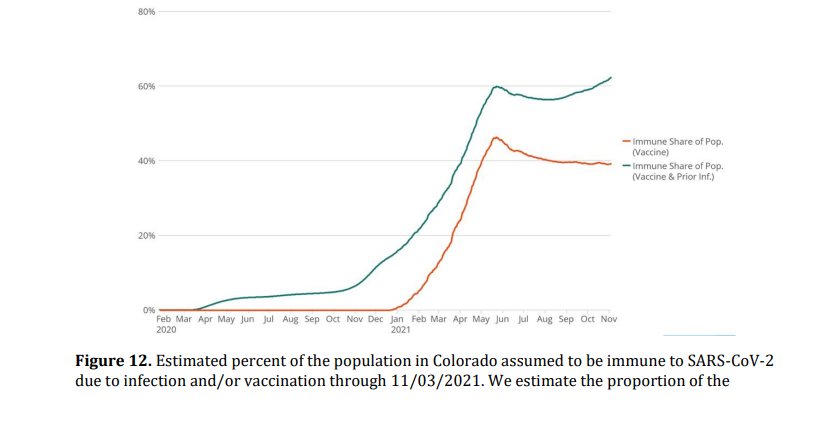 Scientists, state health officials and our governor can’t seem to tell us why Colorado is the third worst place in the United States suddenly for increased rates of COVID infections. A couple weeks ago we even made it briefly to No. 1.

What the hell happened?

Strangely, I think “Game of Thrones,” which explains so much of the weirdness of life right now, can explain this best, too: Winter is Coming.

Take a look at the states with the worst rates of infection right now, according to the New York Times tracker of cases per 100,000 people:

Colorado hospitals had to divert patients at unprecedented levels in October

In other words, 10 of the 12 coldest states in the country are exactly the states with the highest rates of infection per 100,000 people right now.

That’s the best explanation I’ve seen of this new spike: We’re going back inside, gathering together again in close quarters and breathing stagnant air.

"Coronaviruses tend to thrive in winter months and colder weather," Centers for Disease Control and Prevention Director Rochelle Walensky said in a White House COVID-19 briefing last week. "Right now is not the time, as cases are coming down, to become complacent because we do know colder weather is ahead of us."

Colorado’s spike is a worrisome sign that a fifth pandemic wave could be ahead this winter across the United States. The cold belt may be the canary in the coal mine.

I’m simplifying by saying cold weather is the main reason for Colorado’s spike, since there are several contributing factors, listed below. (That’s what journalists do, try to separate the wheat from the chaff of overwhelming information — and disinformation — out there and tell you what is most important.)

And I’ve heard a lot of complaints that the media is hyping how bad it is right now, and unduly alarming folks in Colorado.

But the numbers straight from the Colorado Department of Public Health and Environment are undeniable: Colorado is reporting more than 3,000 new cases per day on average, putting it in the top 10 of all states when adjusted for population, according to data tracked and analyzed by The Washington Post. The state’s rate of new cases is higher than it has been in nearly a year.

In response, Gov. Jared Polis last week did something no other state in the country has done, clearing the way for anyone over 18 years old to get a booster shot.

His unique and unilateral move puts Colorado at odds with the U.S. Food and Drug Administration’s current booster guidance, which advises boosters for only those 65 and older and people who have underlying medical conditions or live or work in high-risk areas. Polis has been one of the most outspoken governors in the country in expressing frustration with foot-dragging at the FDA in approving boosters for everyone and vaccines for children. He’s also paving the way for rationing of healthcare for the first time in the state if hospital capacity is overwhelmed this winter.

1. Because the governor has left COVID policies up to local municipalities in the last year, we have a lot of pockets of unvaccinated populations. Much of Colorado is remote and rural, and a lot of remote/rural areas are not vaccinated at the rates urban areas are.

2. Waning immunity is likely significant for Colorado, where a third of infections now are among the vaccinated. Colorado had a "relatively early start with vaccinations," which, in turn, means that immunity here may have waned at an earlier point than elsewhere, Glen Mays of the public health school told our reporter Seth Klamann. Colorado’s case rate peaks have historically been ahead of the U.S. average. During the fall wave of 2020, Colorado’s case rate peaked roughly two months before the country’s. This is one reason why Polis is eager to do boosters ahead of the rest of the country.

3. More mobility of people is a factor: more people are coming into Colorado now and we’re all moving about the state more, people are no longer social distancing and schools have reopened. The modeling team measures how mobile people are, and this fall we have returned to population movement and mixing that “is at or beyond pre-pandemic levels.” The start of the spike in hospitalizations in Colorado coincides with school openings, “but the return to school, which began about three months ago, does not explain the recent sharp rise in hospitalizations,” cautions the report. “Additionally, patterns of school re-opening across the country do not align with the current pattern of rising and falling epidemic curves across the states.”

4. In contrast to prior waves, the use of nonpharmaceutical interventions such as masks, social distancing and remote work is more limited now, which has likely contributed to increased infection rates.

However, the team examined mask-wearing patterns using public survey data, and found that there has not been a “sharp downturn in reported use of masks coincident with the timing of the surge."

And at this point in the pandemic, there just isn’t any political will to go back to restrictive measures like mask mandates and social distancing and school closings.

The problem is: We’re done with COVID prevention, but COVID is not done with us.

And winter is coming.

As COVID-19-related hospitalizations in Colorado continue to climb toward record levels, a system that has helped patients avoid the brunt of …