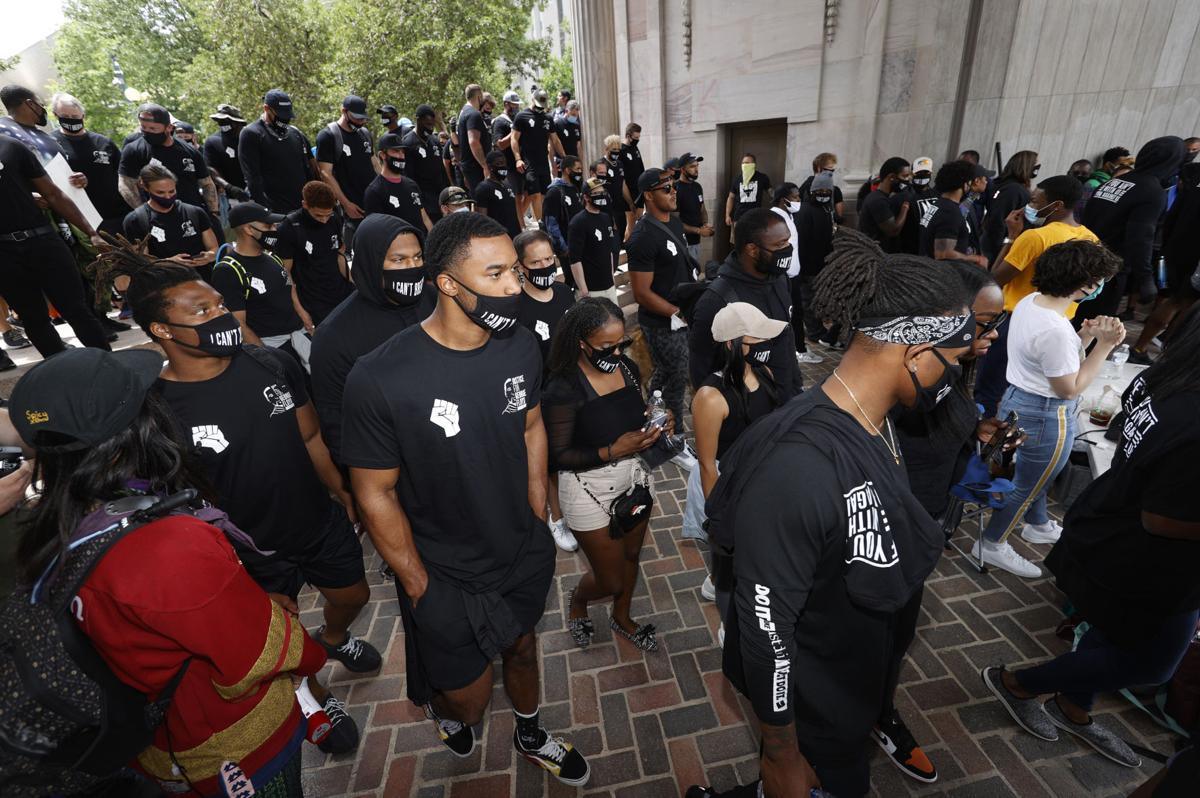 Broncos take part in a June rally in downtown Denver over the death of George Floyd in Minneapolis.

Broncos take part in a June rally in downtown Denver over the death of George Floyd in Minneapolis.

To mask or not to mask

Poor Andy Reid. His Kansas City Chiefs looked like world-beaters — again — and the ol’ ball coach didn’t get to see the game! His coronavirus face shield was all fogged up. (Worst of all, America was denied a proper look at that sweet 'stache.) Oh, well. At least you’ll get a good look at Vic Fangio’s mug — half of it, at least. Fangio rocks a buff like a fly fisherman. Fangio will be joined by new offensive coordinator Pat Shurmur, who eschews the upstairs booth and opts for working from the sideline. “I like being on the field with the quarterback,” said Shurmur, who spent the past two seasons as head coach of the New York Giants, making him a logical substitute if, God forbid, Fangio is forced to miss a game. Coaches must stay masked up, even though every player and staffer is tested daily and NFL coronavirus numbers have been incredibly low: four positives out of 58,621 tests throughout the league from Aug. 21-29. Amazing. Also amazing: no fans will be allowed at Empower Field at Mile High for the season opener — despite Colorado completely flattening the curve. Before you say it's just a game, consider this: if Gov. Jared Polis can ban fans with zero justification, what other arbitrary rules that make no sense does he have in place?

Since I know you care about my fantasy team, it’s with great disappointment I announce “The National Fun League” is taking the 2020 season off. No fantasy football in this corner. Call it a peaceful protest by the Commish, yours truly, after the commissioner’s office was held responsible for a failed trade proposal — a ridiculous accusation. But best wishes to the fantasy players embarking on yet another march to the championship. The question around these hills revolves around the running backs: Phillip Lindsay or Melvin Gordon? My pick is Gordon, in part because NFL defenses have yet to tackle. It’s no fun when the season’s first assignment is to bring down a hefty running back like Gordon. How will the Broncos divvy up carries between their twin Pro Bowlers? "They’re two outstanding runners who both deserve to be starters," Shurmur said. "Who plays the first snap? It really doesn’t matter.” The offensive coordinator pledged “equal” opportunities for both running backs. “In my mind it’s a good problem to have,” Shurmur said. One fantasy prediction: tight end Noah Fant is the breakout performer.

Credit the Miami Dolphins. Now there’s an NFL team that questions why you’d run the same play over and over if it didn’t work last time. Instead of kneeling for the national anthem, the Dolphins said they would stay in the locker room for the national anthem. They did. While the protest didn't earn headlines — out of sight, out of mind — at least it’s not running back a failed attempt at producing new results. That's one of the many problems with the NFL protest movement: instead of coming up with a plan that could gain new supporters, players pursue optics and "empty gestures" (the Dolphins’ words, not mine). They want Twitter clicks, not something that sticks. Broncos wide receiver Courtland Sutton said he will kneel for the national anthem. His choice, and the Broncos have a policy of allowing players to protest as they choose. But why, then, mimic a gesture that must have fallen flat if it's true that nothing has changed since Colin Kaepernick kneeled himself out of the league? Repeating a failed protest is like voting for the same political party for 60 years and expecting different results. You know what would make a real difference here in Colorado? Create allies, not enemies. And a Broncos player would turn heads and open hearts if he took a stand for the tragic deaths of Davarie Armstrong, Xzavier Collier and Chaney Harris — three teenagers murdered in Denver this summer. Take care of our own first.

Paul Klee: Why the 2020 season is so important for the Broncos franchise | Broncos 2020 Preview