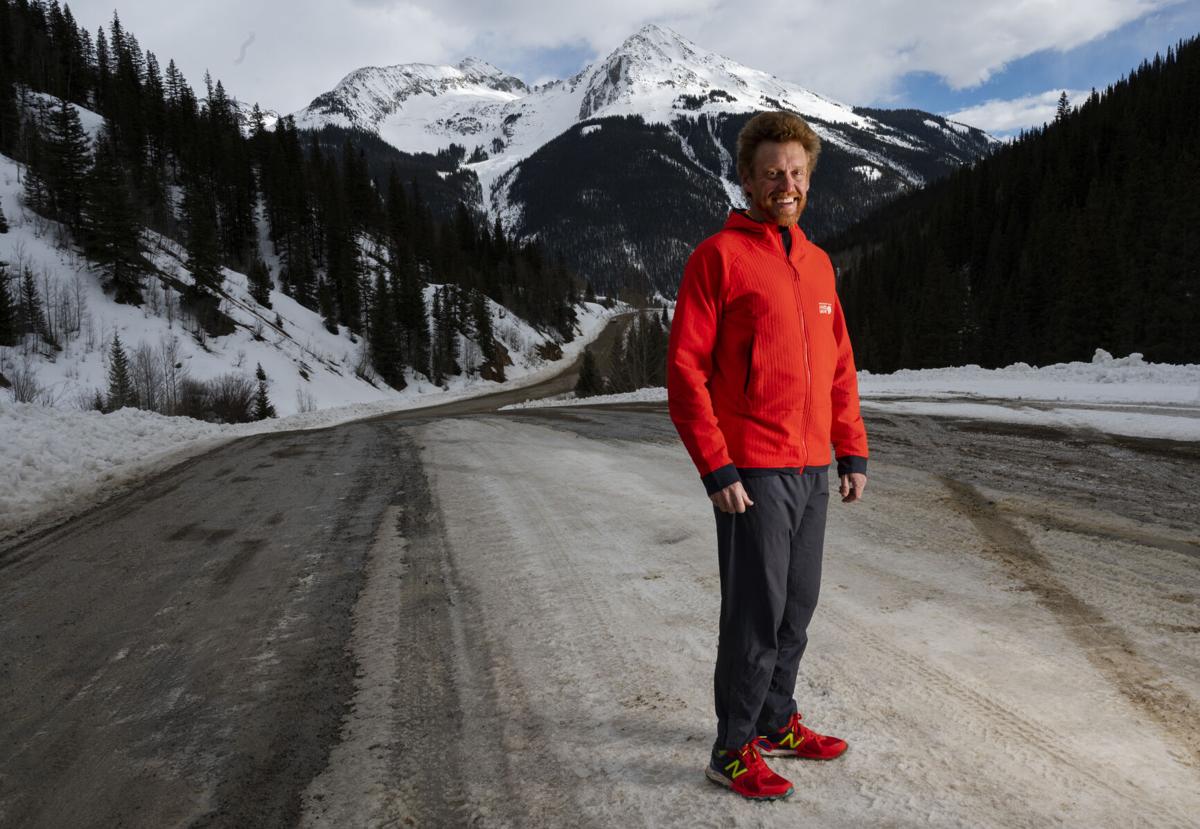 Bryon Powell, editor-in-chief of iRunFar, an online source for all things running, stands for a portrait outside his home in Silverton. 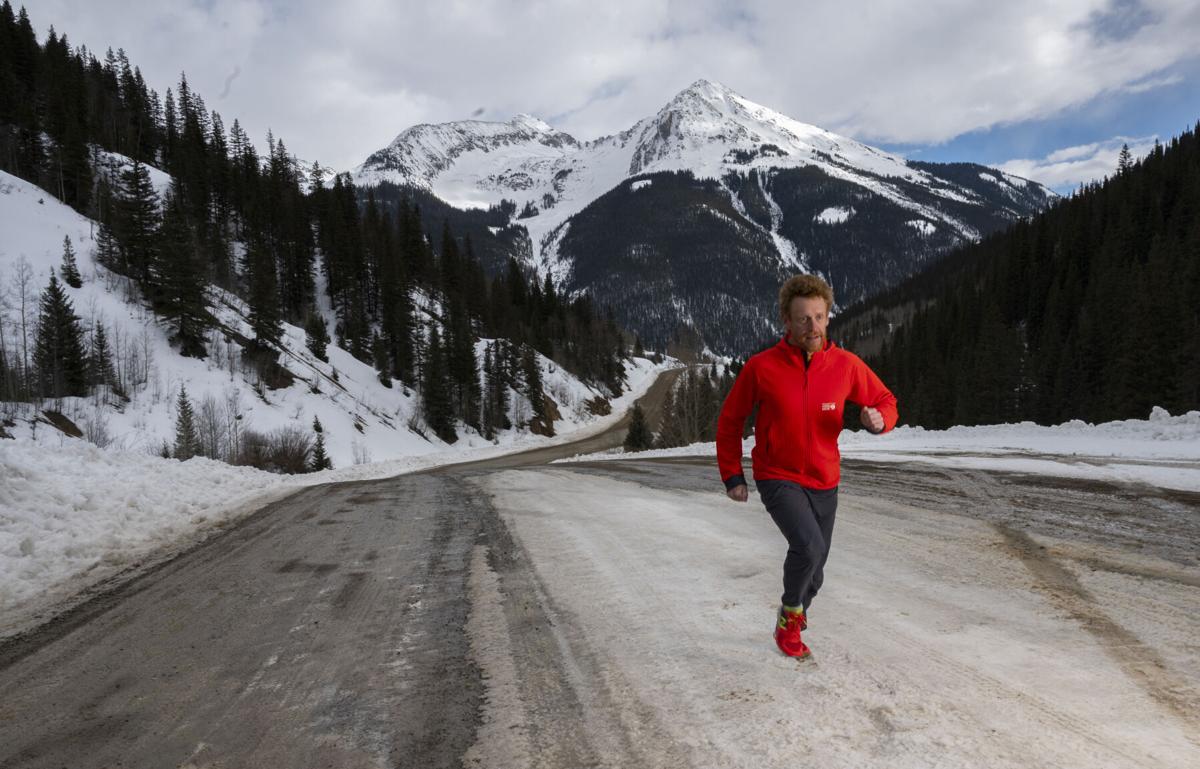 Bryon Powell, editor and chief of iRunFar, an online source for all things running, runs outside his home in Silverton, Colo., Thursday, Feb. 25, 2021. (The Gazette, Christian Murdock) 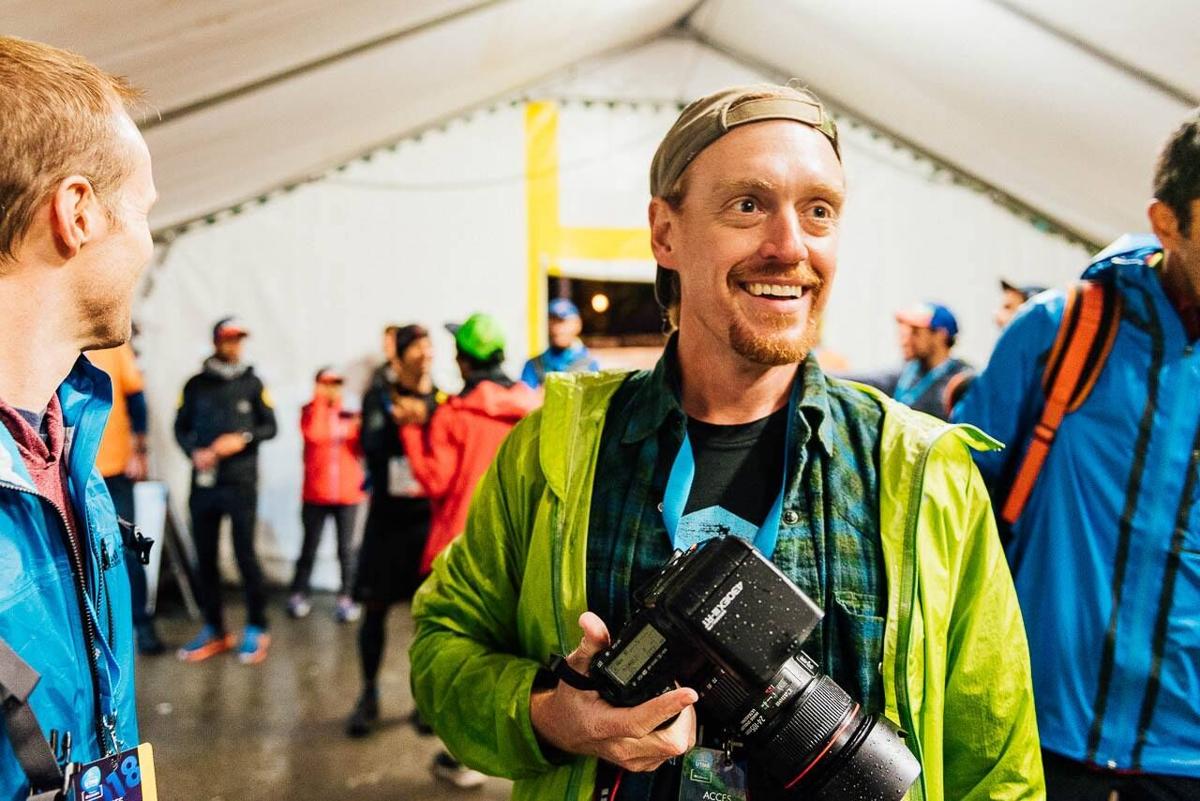 Bryon Powell, iRunFar’s founder and editor-in-chief, works the scene during a race weekend. 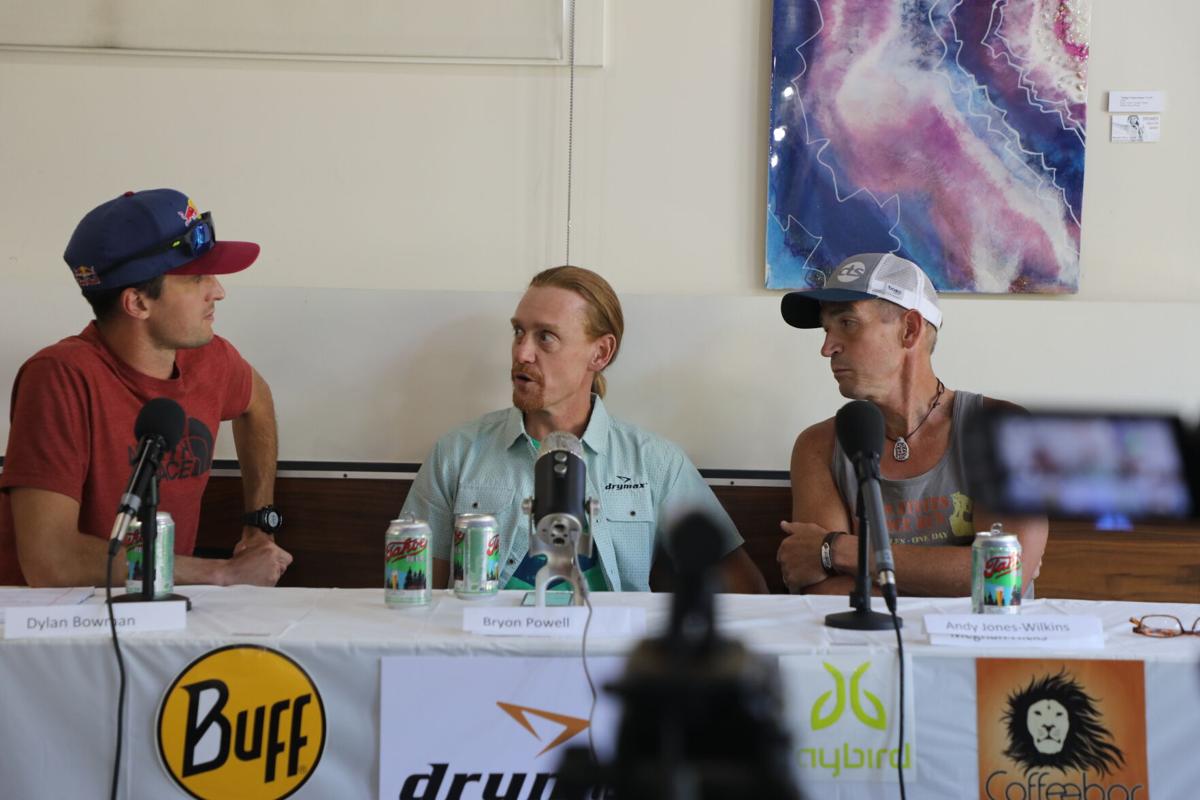 Bryon Powell, founder and editor-in-chief of iRunFar, hosts an interview during a race weekend. 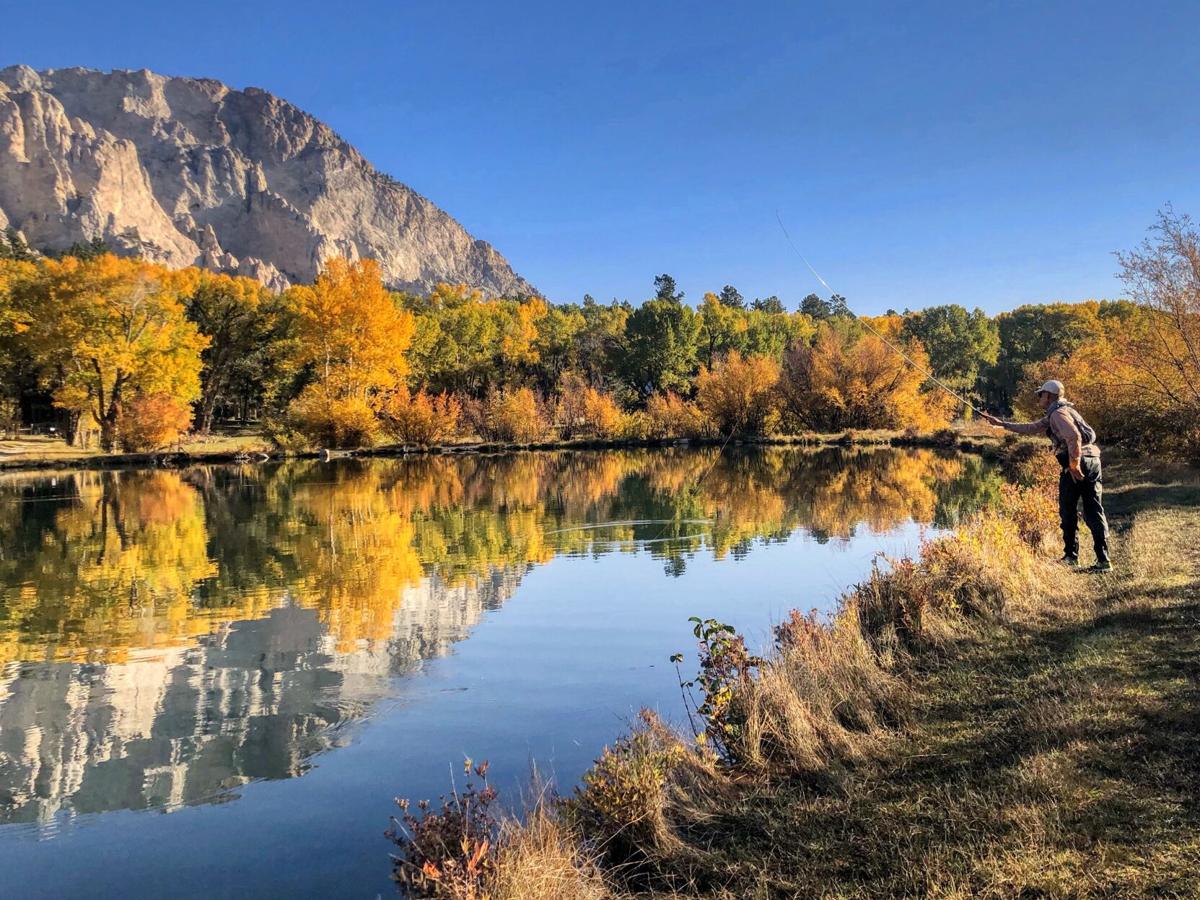 While removed from typical duties of iRunFar during 2020, Bryon Powell completed a Troutman 100 in the Arkansas River Valley, running 100 miles and catching Colorado's iconic trout along the way. Photo courtesy Bryon Powell 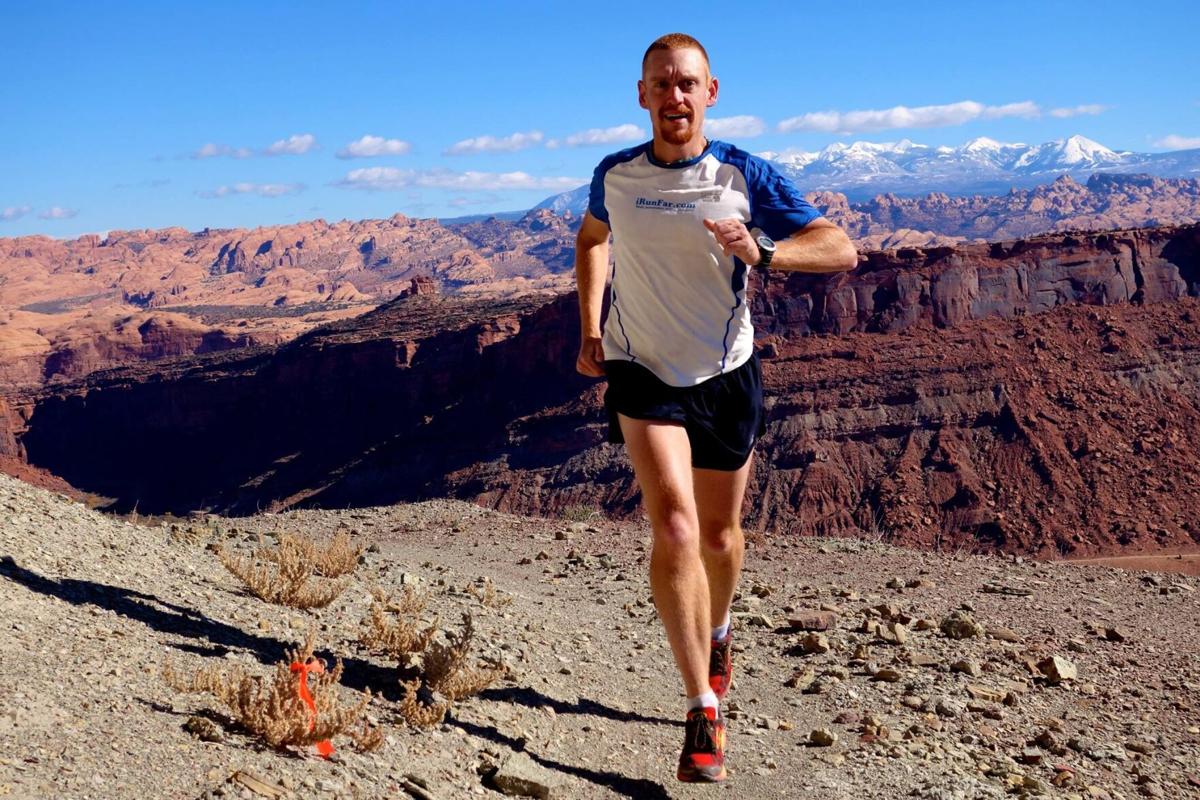 Bryon Powell, editor-in-chief of iRunFar, an online source for all things running, stands for a portrait outside his home in Silverton.

Bryon Powell, editor and chief of iRunFar, an online source for all things running, runs outside his home in Silverton, Colo., Thursday, Feb. 25, 2021. (The Gazette, Christian Murdock)

Bryon Powell, founder and editor-in-chief of iRunFar, hosts an interview during a race weekend.

SILVERTON • Bryon Powell, hair and goatee shaggier than usual, emerges from his cabin and squints under the late-afternoon sun. He blocks the harsh rays with his hand.

“Man,” he says, “when you’ve been sitting inside and staring at your computer all day ...”

So goes another day for Powell, 42, who might be popularly perceived scampering around some far-off mountain range, doing what he does to compete in some of the world’s most daring long-distance foot races.

On the contrary, the founder and editor-in-chief of iRunFar is commonly inside.

He’s inside this little cabin at his Mac computer. Here in this humble abode in southwest Colorado, he operates the go-to web source for all things trail running, everything from race previews and recaps, to top performers and advice, to the gear and trends of an ever-expanding lifestyle.

It is Powell’s task to organize daily content (441 articles in the last normal year, 2019); to maintain advertisers (a struggle in the abnormal 2020); to declutter and optimize the website (“an infinite black hole of its own,” he says); to maintain social media (“delete some troll comment and there’s like four more”); and to otherwise keep pleased iRunFar’s international readership contributing about a million page views every month.

Also in this room, hanging above the computer, is a whiteboard with goals. Powell recently arranged them into do-nots: no spending money, no drinking, no sleep aids.

There is a book open about wilderness medicine. There are other books on the shelf with such titles as “The Anxiety and Worry Workbook” and “The Healthy Mind Toolkit” and “The Mood Cure.”

Powell scrawled his mood on the whiteboard: “Optimistic.” He’s optimistic this day, following a call with his supervisor representing iRunFar’s parent company.

“We had a laundry list of things we possibly could do. There’s always something you could do,” Powell says. “But (it was about) drawing boundaries. Last year, with COVID and no travel, those lines were easier to draw. I just need to be better about drawing those lines now.”

The lines have been blurry for about a decade now, ever since Powell decided to blend his personal and professional lives.

In 2009, removed from his college running days and working as an attorney in Washington, D.C., Powell sold his house and moved across the country to pursue his true passion. He moved in with Meghan Hicks, a fellow trail runner he’d met at a Colorado event. She was working at Yosemite National Park.

Powell, meanwhile, was working to expand his running blog into something more, something bigger.

“We had an old dog, and she would sit at his feet under his desk,” Hicks recalls. “I’d come home in the evening, and her chin would be on his foot, and I would think to myself: How long have these two been in this position, unmoving?”

So the scene went: Powell upping his three write-ups a week to three a day, enticing other contributors to populate the site and enticing advertisers in order to make a living — spare as it was, the leftovers after the costs of business trips to races.

Sleepless and exhausting were the sufferfests he ran and so were the hours of reporting and writing. Yes, he’d find time to train between iRunFar work at his computer. But there was “anxiety” with that, he says.

There was a time en route to Leadville to cover the 100-mile race there, he recalls.

“I forgot my tripod or something,” he says, “and I just broke down crying. I was frazzled beyond belief. I had been running myself ragged for months at that point. I was like, ‘I’m done, I quit.’ I have had that thought many times.”

But last year was different.

Last year, as it became clear that he would not be traveling, as races were canceled and the bankroll suddenly looked grim, Powell did not panic. Rather, he became excited by a new, bold strategy.

He thought: “Let’s use this as a chance to recover. We’ve been going full bore around the world for a decade. ... Let’s recharge our batteries a little bit. That was one of the best decisions I’ve ever made at iRunFar.”

By “we,” Powell typically means Hicks, the site’s managing editor. Their lives aren’t so different from other serious runners, she says, runners who similarly work full-time jobs and carve out time to train and travel.

Their lives might be seen as a “dream,” Hicks recognizes. “You’re running a business on your personal passion. But I think that’s actually a really hard thing to do.”

“The way Bryon and I have maintained our love of running over the years has been very different, how we set our boundaries and how we walk away. There’s no perfect answer, and it’s a moving target all the time.”

And it’s probably not sustainable, Powell says. He doesn’t intend to be an attorney again, “but this is the second career, and I’d be surprised if there’s not a third someday,” he says. “There’s only so much time and energy you can pour into this.”

More time fly fishing would be nice. The year 2020 was good for fly fishing.

It marked a proud achievement for Powell: 100 miles on foot through the Arkansas River Valley, catching the “grand slam” of Colorado trout along the way — brook, brown, cutthroat and rainbow.

And that was key: patience beside the stream.

“It’s zen in a way,” Powell says. “Running, I’ve done for so long, and it’s nice when I don’t think about running, which means I think about everything else. But when I’m fishing, I’m watching the fly, I’m watching for the fish. You have to be in the moment.”

The snow didn’t stop Ron Forseth from his ritual one recent morning.