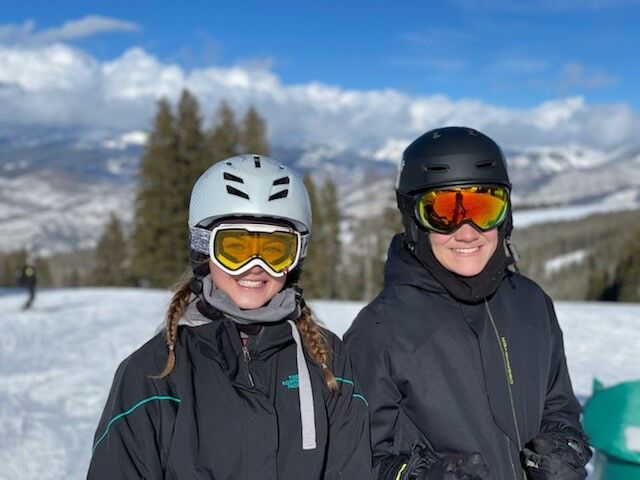 For a pair of Colorado Springs teenagers, a math assignment turned into a massive day on the ski slopes.

Kayla Anderson, a junior at Pine Creek High School, recently presented to her pre-calculus class the painstaking process of netting 90,450 vertical feet in fewer than eight hours, from the time Beaver Creek Resort opened and closed.

To put that in perspective, 30,000 vertical feet is considered a hardcore day. Anderson, a lifelong skier and athlete with a competitive drive, previously notched close to 49,000 feet.

When tasked with a project applying math to life, Anderson turned to her beloved sport. She competes in cross-country, track and soccer, but skiing has always been her “getaway,” she said.

“Calming for me in a crazy life,” she said. And most needed, she said, after a crazy year. The pandemic separated her from teammates and classmates and turned teenage life upside-down.

But the scheduling changes allowed for a midweek escape to the slopes, a Wednesday when lift lines would be short. That would be critical for getting up and down the mountain fast.

A running partner with similar physical and mental fortitude and sharing Anderson’s knack for stat-keeping, Gonzalez helped with configurations. They would stick to two lifts, one gaining 2,159 feet and the other 2,102 feet. Two runs, 42 laps, speeds maxing out at 67 mph. Anderson wore her lucky helmet, signed by the legendary Lindsey Vonn.

People followed along on Facebook, where Anderson’s dad posted updates on the duo’s fundraising mission.

“This was for childhood cancer,” Anderson said. “Not for an A.”

Anderson and Gonzalez felt inspired to keep going — especially after Anderson’s dad showed them a certain video of encouragement from a certain someone.

“Hey Kayla, it’s Lindsey,” Vonn said. “I heard you were gonna ski 70K in one day. That’s nuts. But I wanna wish you all the best of luck. I know you’re gonna crush it.”

Crush it she did, thanking her partner along the way.

“One of the biggest parts was each other,” Gonzalez said. “We kept each other going.”

Stargazing at Colorado's otherworldly dunes, and the plight of dark skies beyond

MOSCA • The campground opened for the season this month, and of course it was full. Of course people from near and far came for this certain s…