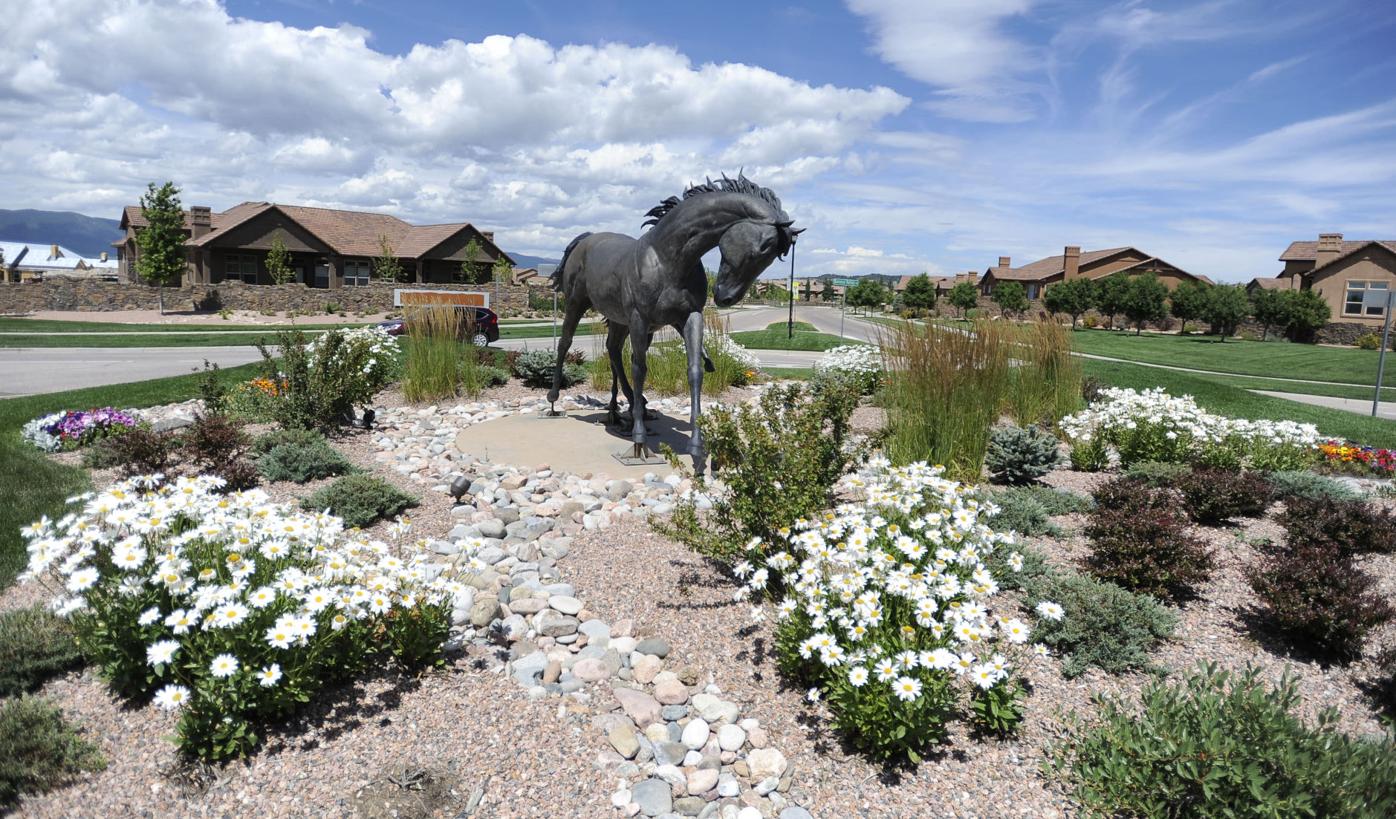 One of the roundabouts in the Flying Horse neighborhood has a beautiful garden and horse sculpture.

One of the roundabouts in the Flying Horse neighborhood has a beautiful garden and horse sculpture.

A Texas real estate company wants to bring an urban-style, mixed-use development to the heart of Colorado Springs’ suburban north side.

Classic Cos., one of the Springs’ largest homebuilders and real estate companies, has developed the sprawling Flying Horse project over nearly 20 years. It boasts six- and seven-figure homes, a golf course, The Lodge at Flying Horse boutique hotel, a private club, high-end steakhouse and other amenities, along with a handful of commercial uses that include a 7-Eleven and Josh & John’s ice cream store.

Downtown Flying Horse proposes a mix of land uses on Flying Horse’s far south end — northwest of Colorado 83 and New Life Drive, west of the future extension of Powers Boulevard and near InterQuest Parkway, according to a proposal submitted to city planners by Stillwater and Classic.

Clay Roby, Stillwater’s managing director, said that mix would be in line with the development activity along InterQuest Parkway, which is one of the city’s hottest commercial areas and home to hotels, apartments, restaurants, stores, entertainment and other uses.

The proposal submitted to city planners shows Downtown Flying Horse would have an upscale hotel with up to 250 rooms; as many as 1,500 residences, with apartments and attached single-family housing, which generally refers to townhomes and condominiums; 800,000 square feet of offices; and 90,000 to 300,000 square feet of commercial uses, such as a grocery.

Some buildings would be designed with ground floor commercial spaces and upper floor residential units — a common feature of older downtowns, the proposal shows. Those buildings would line a two-lane road that would serve as Downtown Flying Horse’s primary, internal travel route.

A focal point of the project would be 3.5 acres of open space, to be surrounded by the hotel, restaurants, offices and residences, the proposal shows.

Despite the Downtown Flying Horse name, the project isn’t proposed as a densely packed environment, but rather a highly walkable, master-planned and self-contained community that would appeal to a variety of users, Roby said.

But, he added: “Whether you’re coming just on your own, maybe with your dog or whatever, or you’ve got family, friends or a spouse, you’ve got kind of a nature-infused environment ... and, this is a cliche, but you can live there, you can work there, you could entertain yourself there.”

Stillwater has contracted to purchase the 67.4-acre site from Classic, Roby said, though the company first has asked the city to amend Flying Horse’s master plan and approve a zoning change that would allow for the Downtown Flying Horse development. If the company obtains those regulatory OKs, it expects to complete the property’s purchase by year’s end, Roby said. Construction on the project could begin next year, though the company is mapping out a phased development of the project, which will be market driven, he said.

Flying Horse has been one of the city’s more successful upscale developments over the last several years, prompting Classic to expand the brand.

The company is developing Flying Horse North, a similar high-end project in unincorporated Black Forest north of the Springs. Flying Horse North also will have luxury homes, a golf course and other amenities. Classic also developed University Park and Indigo Ranch, among other Springs-area residential communities.

Classic also is redeveloping the Springs Ranch Golf Club on the city’s east side into The Greenways at Sand Creek, a residential community where Stillwater Capital plans a 330-unit apartment complex. Roby said the company expects to break ground on the apartments in a few months.

Stillwater Capital develops, underwrites, acquires, manages and sources a wide range of real estate projects, according to its website. Its projects, most of which are in Texas, include apartments, a mixed-use development anchored by the headquarters of the Professional Golfers’ Association of America, office complexes and an entertainment center.

A Dallas real estate company has proposed a 330-unit, upscale apartment complex on Colorado Springs’ northeast side, as the city’s quality of …