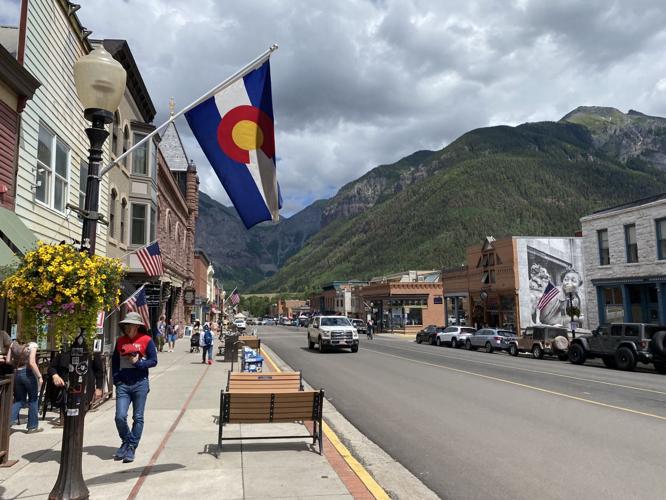 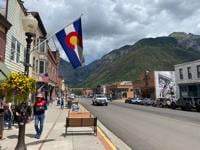 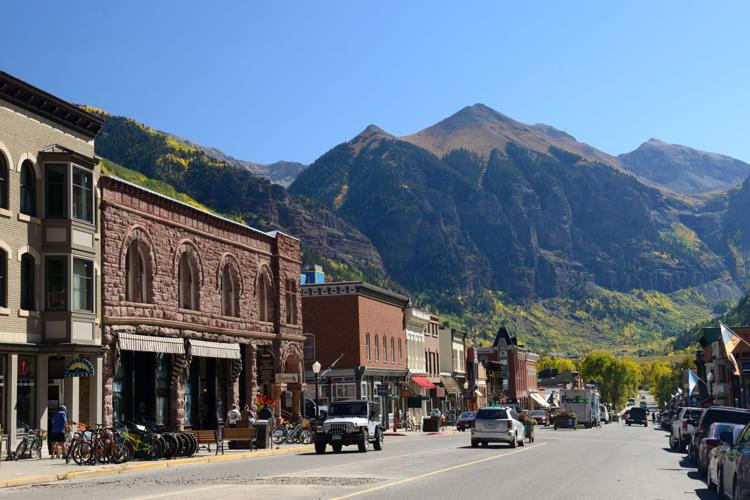 Tourists on sidewalks along Colorado Avenue in the historic district of Telluride. 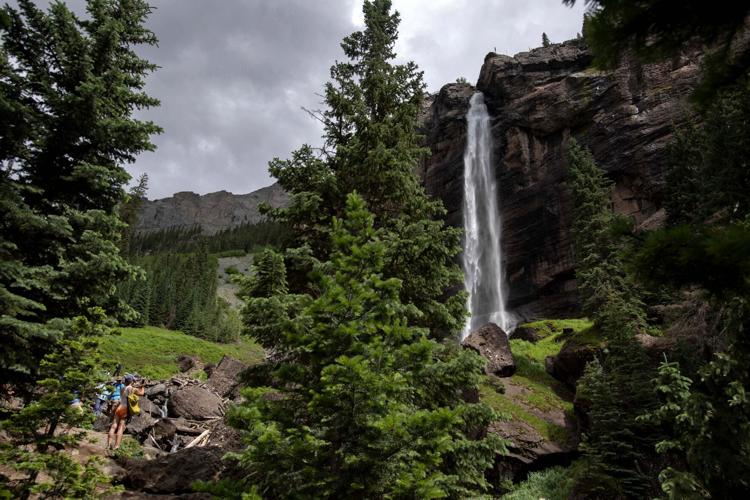 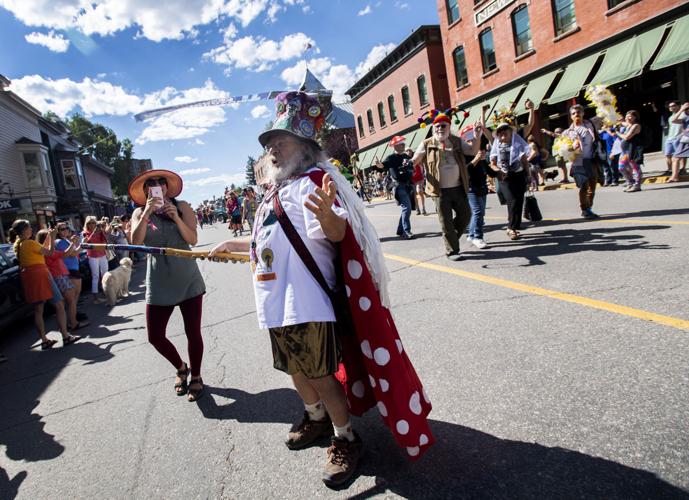 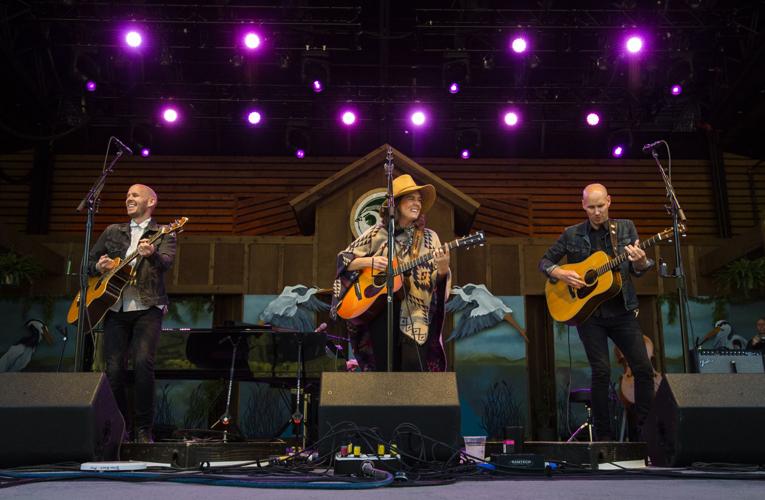 Tourists on sidewalks along Colorado Avenue in the historic district of Telluride.

Along Telluride’s main street, Colorado Avenue, you might not look twice at the brick and white-trimmed building that blends together with its commercial and residential neighbors.

This is called the Mahr Building, standing in the place of the old San Miguel Valley Bank. A legend was born here.

It was the morning of June 24, 1889. Matt Warner held a gun to the bank’s teller while Robert LeRoy Parker stashed the money. Parker would take another name later: Butch Cassidy. This was his first robbery.

And this is but one story told along Colorado Avenue, this National Historic Landmark District that is one of the most postcard-perfect places in all of the West.

1:00+10 Looping through relics of Pikes Peak past, this trail is 'a treasure trove of history'

Deep in the San Juan Mountains, Telluride is a wonder in both natural and urban senses. The Victorian architecture preserved from the days of mining now houses the kind of designer brands and restaurants that please the rich and famous. They come for the ski resort, those destination slopes that backdrop the town.

After gold and silver in the late 1800s, the most precious resource today is powder in the winter. Telluride is no less busy in the summer, when the breathtaking hills turn green as they surely appeared that June day in 1889.

Don’t take to Colorado Avenue with the ill intents of Butch Cassidy. But you’ll surely leave as happy as him.

Telluride Trappings and Toggery calls itself the town’s longest-standing store, established in 1972. The founders were said to start their enterprise “under the assumption that even cowboys and hippie ski bums needed a place to buy clothes.” Now, by its own account, the store has “expanded its repertoire to accommodate Telluride’s larger and more sophisticated clientele.”

That’s a clientele represented at Society Telluride; friends shop global brands with Champagne in hand. Alpen Schatz, meaning Alpine Treasures, showcases the European elegance that broadly defines Colorado Avenue. The aim is “to bring you the magical traditions of the Alps directly to your home,” with handicrafts including Swiss dog collars.

The lavish culture is seen, too, in the high-end jewelry and art at Elinoff & Co. More luxury at Overland Sheepskin Co., with an impressive array of leather and fur accessories.

Colorado state park entrance fees will be waived on Aug. 1

Sublime is among Colorado Avenue boutiques stocking the latest and greatest in women’s fashion. Down to Earth offers something more casual and Bohemian, while Black Bear Trading Co. goes for Western wear.

Hook is a must-visit, true to its name with an eccentric display of wall hooks. The chocolate bars are just as well-known around town, as is the hot sauce.

Between the Covers is the cozy, independent bookstore on the main drag. This is as much a reading town as it is a music town, as exemplified by the acoustic and electric guitars at Telluride Music Co.

For outdoor needs, Jagged Edge is the trusted source, with gear and apparel from top makers.

On Colorado Avenue, you can’t go wrong any time of the day at Butcher + Baker. It’s bowls, burritos and pastries for breakfast, and comforts like the fried green tomato burger for lunch. Just off the main drag is a name known around the world: Baked in Telluride, an emporium of bagels and doughnuts and afternoon pizza and sandwiches.

Speaking of pizza, if you’re unfamiliar with Detroit-style — rectangular, thick, crispy edges — allow Brown Dog to introduce you. The favorite is the 3-1-3, a white pie with salami, ricotta, red chiles, sweet peppers, basil, arugula and Parmesan.

It’s Mexican like you’ve never had it at La Cocina de Luz, specializing in vegetarian and vegan dishes made with organic ingredients. Also check out the juice bar and freshly churned ice cream. The surprises continue on the patio, where Caravan serves beloved Middle Eastern fare out of a trailer.

One head-turning building along the main street is the historic New Sheridan Hotel, home to Chop House Restaurant. Spoil yourself with some surf and turf, or simply belly up to the bar and enjoy the local, old-school vibe.

For elevated finds, look to The National; it was an editor’s pick of Ski Magazine last year, noted for “an ever-changing menu of creative contemporary American.” Also picked was 221 South Oak, a block off Colorado Avenue. Expensive plates featuring lamb, short ribs, duck and trout at last check.

Cheap margaritas and global beers have been the calling card at Last Dollar Saloon. Also on the main street is The Tunnel, a modernized speakeasy that has required a password. Off Colorado is another bar that aims to transport you: There, where you pick a spirit and house-made jam mixture.

A visit to Bridal Veil Falls is unforgettable — albeit crowded. The state’s tallest free-falling waterfall is reached by driving Colorado Avenue to the east end of the box canyon; decide on the trek via road or trail.

For a closer break from downtown, take a stroll around Town Park. When it’s not consumed by a festival, it’s a quiet, scenic, stream-side space for picnics and sports on a variety of fields and courts.

Another must-do is the gondola ride from downtown. Have the camera ready on the way up to Mountain Village.

Check the listings for shows at the Sheridan Opera House and the Michael D. Palm Theatre.

Colorado Avenue is quite the scene during annual, colorful happenings. Among them: the Mushroom Festival (Aug. 17-21) and Blues and Brews Festival (Sept. 15-18).

Main Street Colorado is a summer series spotlighting downtown stretches of mountain towns that altogether give the state its undeniable character.

Former Marine Jim Hickey has walked across the country to spread awareness of cancer and the people battling it. On Saturday, Hickey finished his latest trek for a 2-year-old battling acute lymphoblastic leukemia.