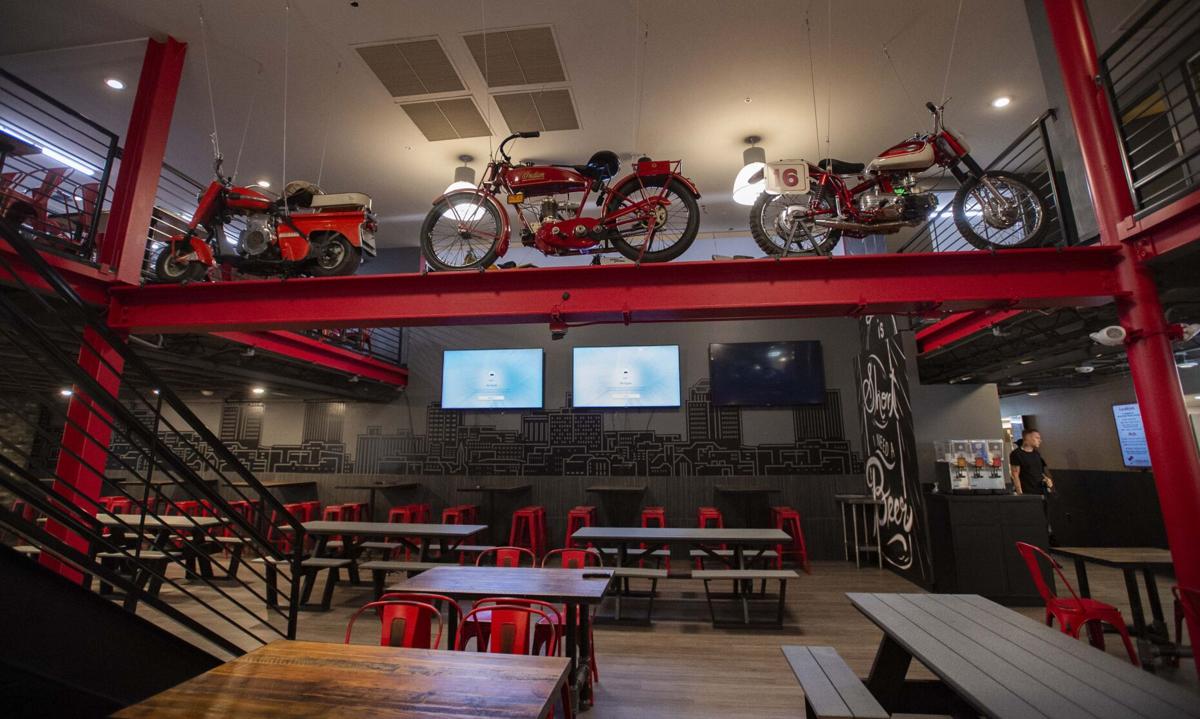 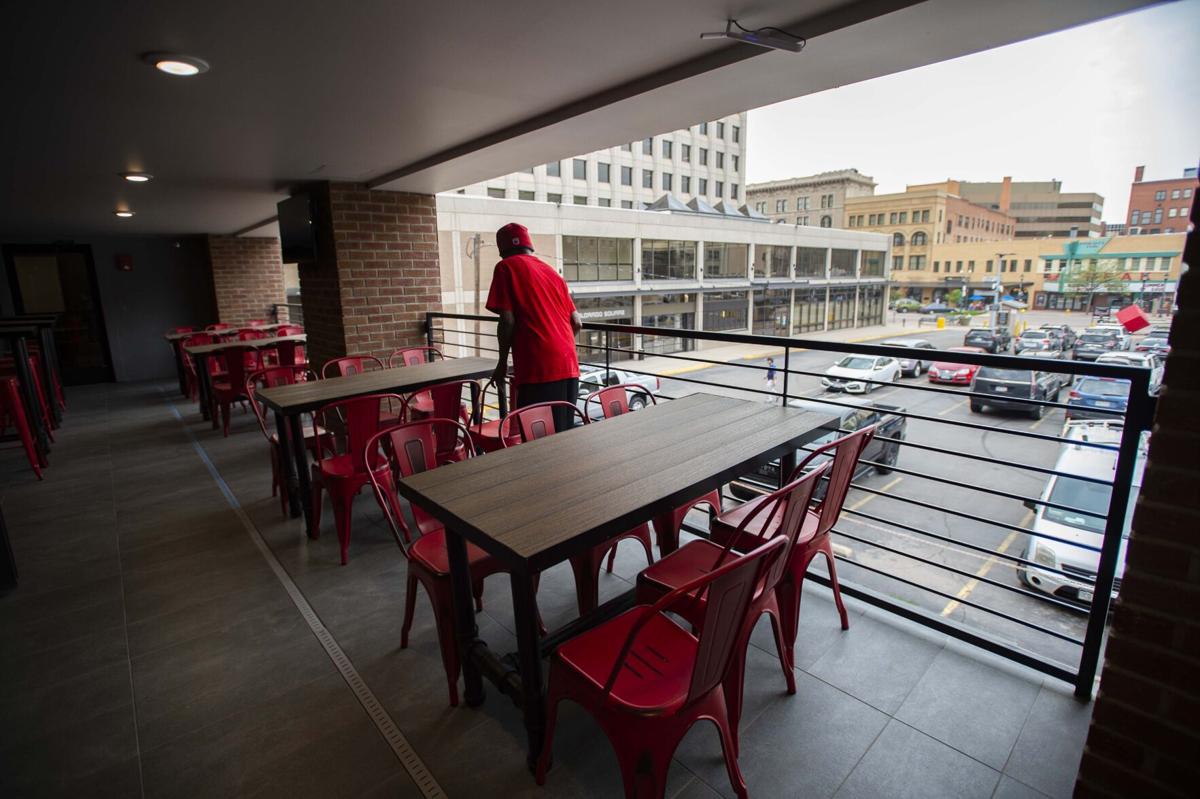 The Tejon Eatery at 19 N. Tejon St. in downtown Colorado Springs features outside dining on its second floor. 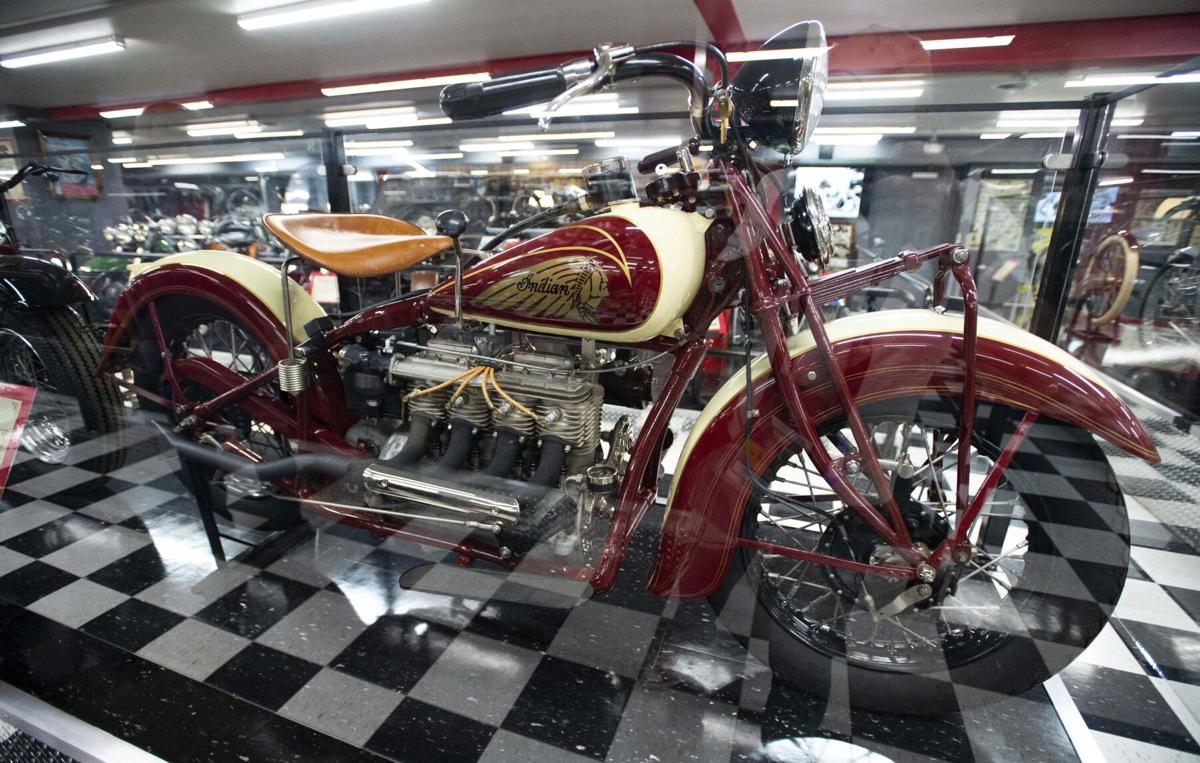 A 1935 Indian Four is one of the more than 80 motorcycles from the early 1900s to 1970s on display at the Rocky Mountain Motorcycle Museum, on the second floor of the new Tejon Eatery. It is free and open to the public. 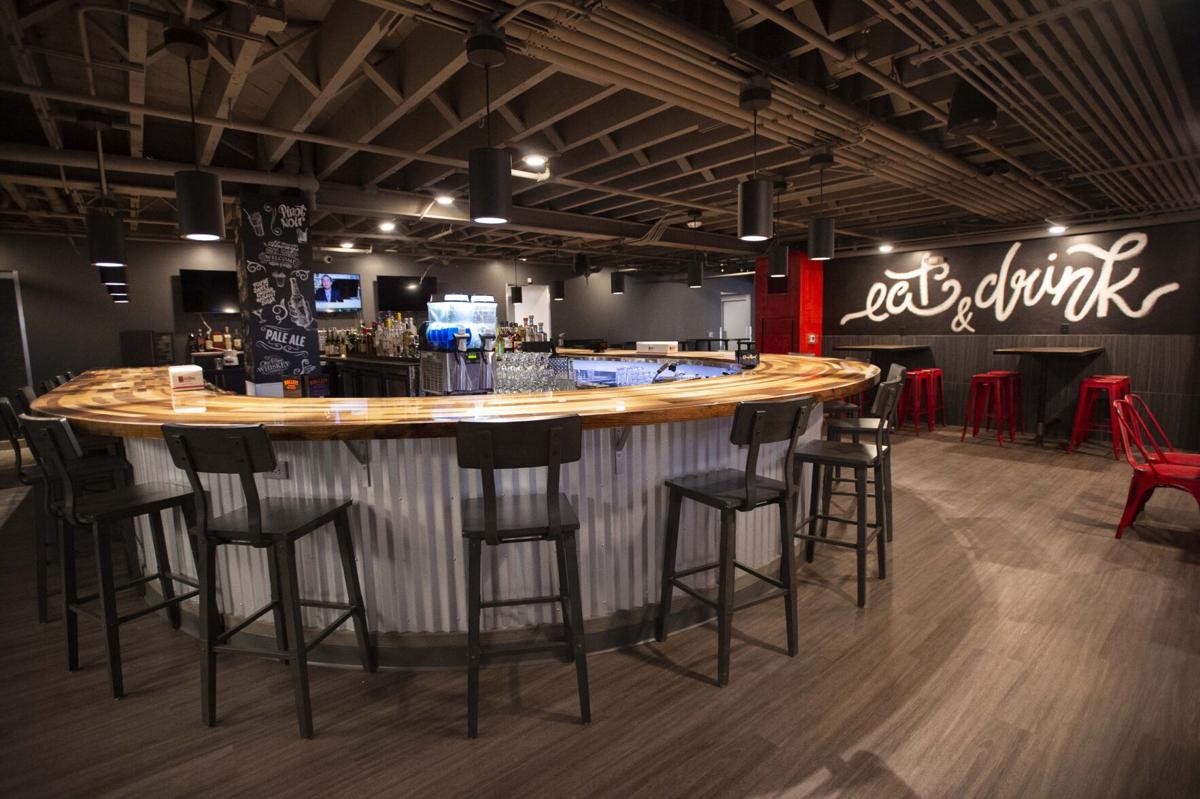 A first floor bar inside the Tejon Eatery is one of several amenities at the new food hall in downtown Colorado Springs. The venue, with nine restaurants and two bars, is set to open next week. CHRISTIAN MURDOCK, THE GAZETTE 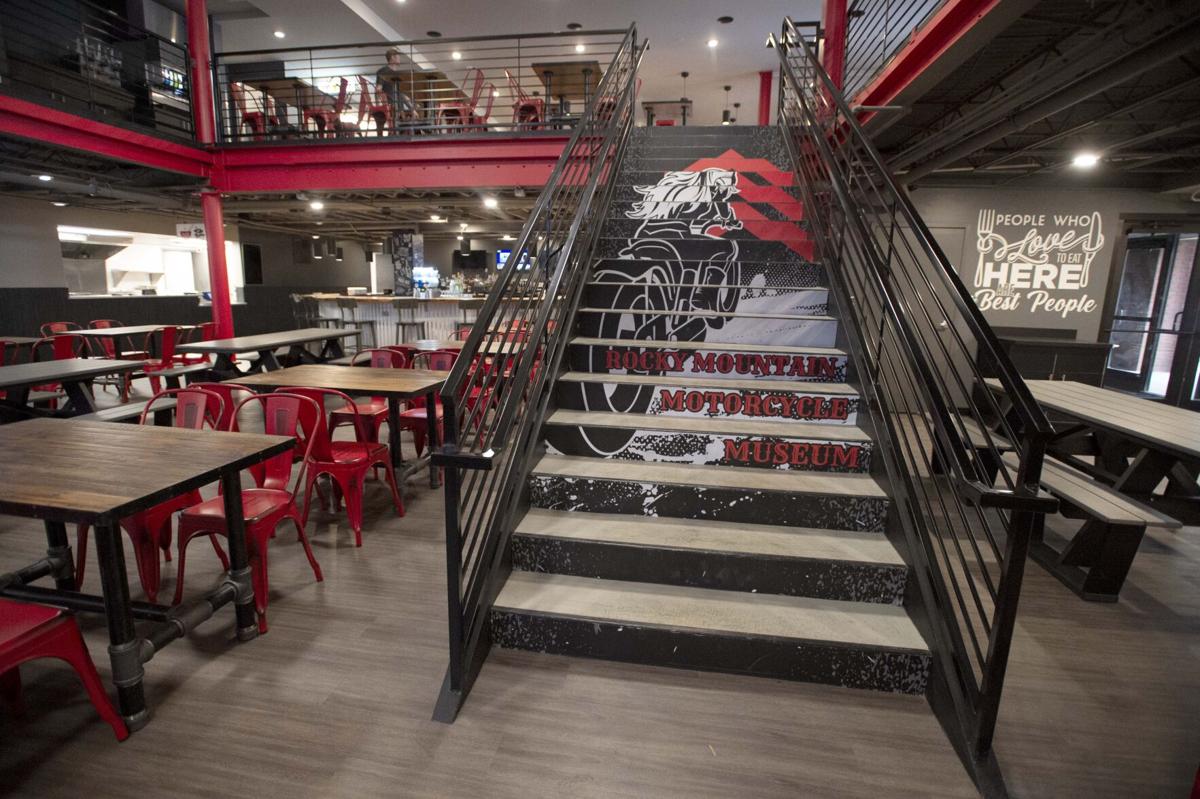 Stairs lead to the second floor of the new Tejon Eatery, where there’s a second bar, more seating, an ice cream shop and the Rocky Mountain Motorcycle Museum. CHRISTIAN MURDOCK, THE GAZETTE

A first floor bar inside the Tejon Eatery is one of several amenities at the new food hall in downtown Colorado Springs. The venue, with nine restaurants and two bars, is set to open next week. CHRISTIAN MURDOCK, THE GAZETTE

Stairs lead to the second floor of the new Tejon Eatery, where there’s a second bar, more seating, an ice cream shop and the Rocky Mountain Motorcycle Museum. CHRISTIAN MURDOCK, THE GAZETTE

Restaurants and museums are part of the fabric of downtown Colorado Springs.

Now, the area has nine more food choices and a new museum — all under one roof.

The Tejon Eatery food hall opens July 22 in a remodeled office building at 19 N. Tejon St. in the heart of downtown, though portions of the venue might open as early as this week.

Tejon Eatery, launched by longtime downtown nightclub owners Sam and Kathy Guadagnoli, will have nine restaurants, two large horseshoe-shaped bars and seating for about 350 people spread across its first and second floors.

The second floor also will be the new home of the Rocky Mountain Motorcycle Museum, with dozens of bikes from the early 1900s to the 1970s, along with motorcycle gear, historical photographs, advertisements and other memorabilia. The museum has moved from the Pikes Peak Harley-Davidson dealership on North Nevada Avenue.

“I think a food hall will be great here, with all of our (surrounding) offices,” Sam Guadagnoli said of Tejon Eatery’s location. “This really is quite different than most food halls.”

Food halls — multiple food and beverage concepts that operate together in a single space and often serve as social gathering spots — have been popular for years in Denver and other cities, but only now are taking shape in Colorado Springs.

C.O.A.T.I., with more than a half-dozen vendors, opened last year in the 500 block of South Tejon Street, becoming one of the city’s first true food halls. Other multiconcept and mixed-use venues include the Payne Chapel, Ivywild School, the Old Depot and Lincoln Center.

The Guadagnolis have planned the Tejon Eatery for more than a year, though its opening was delayed for months because of the COVID-19 pandemic, Sam Guadagnoli said. Their downtown businesses include Cowboys, Blondies, The Mansion and Gasoline Alley; they also operate the upscale Prime 25 steakhouse south of downtown.

Guadagnoli said he was intrigued by the idea of a food hall after watching food carts do bang-up business outside his downtown nightclubs, especially on weekends.

“There’s lines on Friday and Saturday nights coming out of the clubs,” he said. “They do great. They’re selling hot dogs or burgers or tacos. They sell out every night.”

The building at 19 N. Tejon, which he owns, went through a $2 million upgrade to create the eatery, which Kathy designed, Sam Guadagnoli said. The remodeling included removing offices and opening up a portion of the first floor to the second floor, which created an open-air seating area.

• An ice cream and candy shop that sells ice cream, shakes, floats, malts and candy by the pound; it’s decorated with a soda fountain-like counter and stools, circular tables, old-fashioned napkin dispensers and black-and-white wall tiles to match the floor pattern and conjuring up images of an 1950s-era ice cream parlor.

• A first-floor seating area with dozens of individual and group tables, sofas, three big-screen TVs and a bar. The second floor has another bar, four more big-screen TVs, dozens of additional tables and a private meeting room — with a white board and wall TV — for business meetings, working lunches or corporate gatherings. A second-floor outdoor seating area faces Pikes Peak Avenue and has its own TVs and speakers.

“I’ve been down here a long time,” he said. “We used to be a destination. But now all the apartments going up and all the people moving downtown, well maybe we’ll become a neighborhood and a destination, which would be kind of cool.”

Dylan Montanio, Tejon Eatery’s executive chef, said the venue’s variety of food concepts is meant to offer something for everyone, while its large seating areas provide places for visitors to gather.

From In-N-Out to downtown hotels; Colorado Springs commercial construction not slowing down

“That was really what we were trying to design here, a space where people want to come in, where there’s a lot of variety, has a really nice inviting feel to it, so you’d want to sit down and relax,” Montanio said.

Tejon Eatery, which will be open seven days a week, expects to employ 80 to 90 people at full capacity, though, like many restaurants, it has had trouble finding workers, Guadagnoli said.

The second-floor Rocky Mountain Motorcycle Museum, meanwhile, is free and open to the public. A museum grand opening for its new location is targeted for late August or early September, said Jim Wear, the museum’s founder, curator and executive director.

The nonprofit museum seeks to educate people about the history and legacy of motorcycling, including in the Pikes Peak region, Wear said. It joins the Olympic & Paralympic Museum, the Colorado Springs Pioneers Museum and the Colorado Springs Fine Arts Center as downtown attractions.

He said he and Guadagnoli, a motorcycle buff, talked for years about joining forces to showcase the museum’s collection.

The roughly 85 motorcycles now on display at Tejon Eatery are owned by the museum, while others are on loan from individuals and collectors; 10 to 11 of the bikes at the museum are part of Guadagnoli’s personal collection.

Wear expects the new location to help attract a wider variety of visitors, including office workers, tourists and families, in addition to motorcycle aficionados.

“We’re right downtown and of course downtown is becoming a big tourist area, so we’re going to get tons of people who are just wandering through — ‘oh, let’s check this museum out,’” Wear said. “So we will expose a completely new audience that we’ve never been able to get to in the last 30 years via this location.”

Amy’s Donuts, whose more than 100 varieties range from the traditional to the exotic, will add a second location next year in fast-growing nor…