After months of internal strife at the Colorado Springs Charter Academy, the state’s education commissioner is weighing whether to step in.

The head of the Colorado Department of Education, Katy Anthes, could ask for a third party to provide external oversight for the K-8 school on Chelton Road that has struggled with its financial controls. It would be a step that has only happened once before in state history, said Dustin Sparks, with the Charter School Law Group, who is working with the school.

Anthes called a meeting last Thursday to hear from the Colorado Charter School Institute, the group that oversees the state’s charter schools, and academy representatives before making a decision.

The institute and the former school board president have both called on her to use her emergency powers granted by state law to intervene in the school.

“The commissioner is using the information presented by the parties to determine whether she uses the statutory powers she has to direct the parties,” CDE spokesman Jeremy Meyer told The Gazette in an email. “We are expecting to have her response in the next week.”

Former academy Board President Breckenridge Merkle called for help in a May letter that stated while he had no evidence of wrongdoing, the state needed to take action because of the "mismanagement" and "dysfunction" of the board.

"It is my opinion that an emergency exists at CSCA that necessitates either the Charter School Institute (CSI) or the Colorado Department of Education to take over the operations of the school to stop the damage being done. Without this intervention, I believe that CSCA will not be able to recover," Merkle wrote.

Merkle's plea followed formal notice from Assistant Attorney General Joseph Peters to Merkle and Head of School Zoe Ann Holmes in April that the school’s board may have committed several violations of the Colorado Charter School Institute’s School Compliance Policy. The letter alleged problems such as a lack of proper oversight to prevent fraud, and allowing board members to direct individual staff members instead of leaving day-to-day operations to the head of school, as per its own policies. 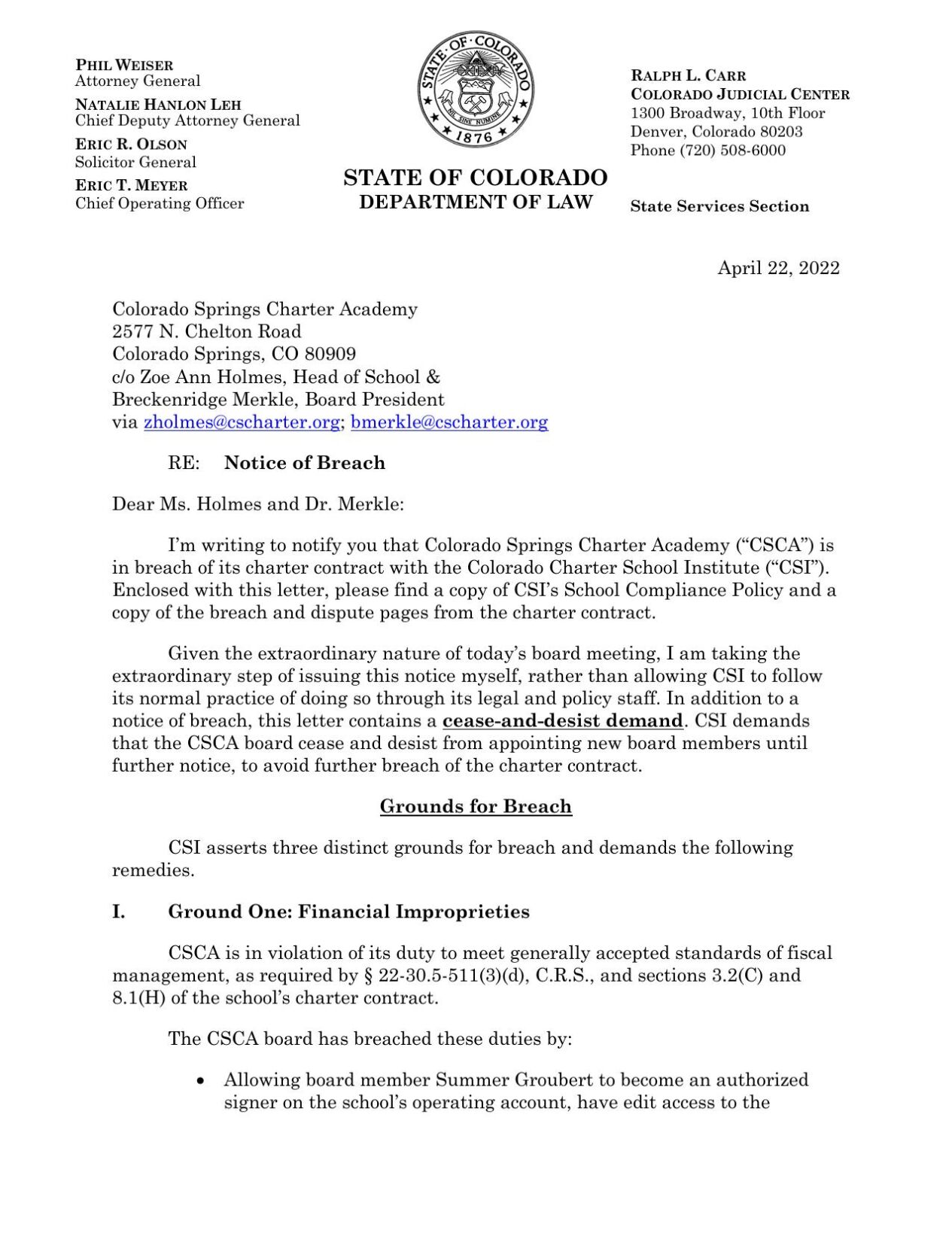 The letter includes a cease-and-desist order that demands the board abstain from appointing new members until the institute has concluded its investigation. That order remains in effect. The school board currently has two unfilled seats.

The school's formal response to the state called the allegations unsubstantiated and asked for an apology for needlessly damaging board members' reputations.

The board’s treasurer, Summer Groubert, told The Gazette the allegations were ill-informed, “slanderous and libelous.” Groubert is in the Republican primary for House District 18, which covers part of western El Paso County.

Sparks said the Attorney General's Office found no evidence of embezzlement or favoritism, and that those findings will be released after the commissioner's decision is made.

On May 20, Merkle sent his letter to Anthes and CSI Executive Director Terry Croy Lewis, requesting an emergency intervention from either agency to prevent “a mass exodus of both employees and students” from the school. He noted that a budget for the coming year had not been completed and the board could not agree on important aspects of it, such as how many students to expect. 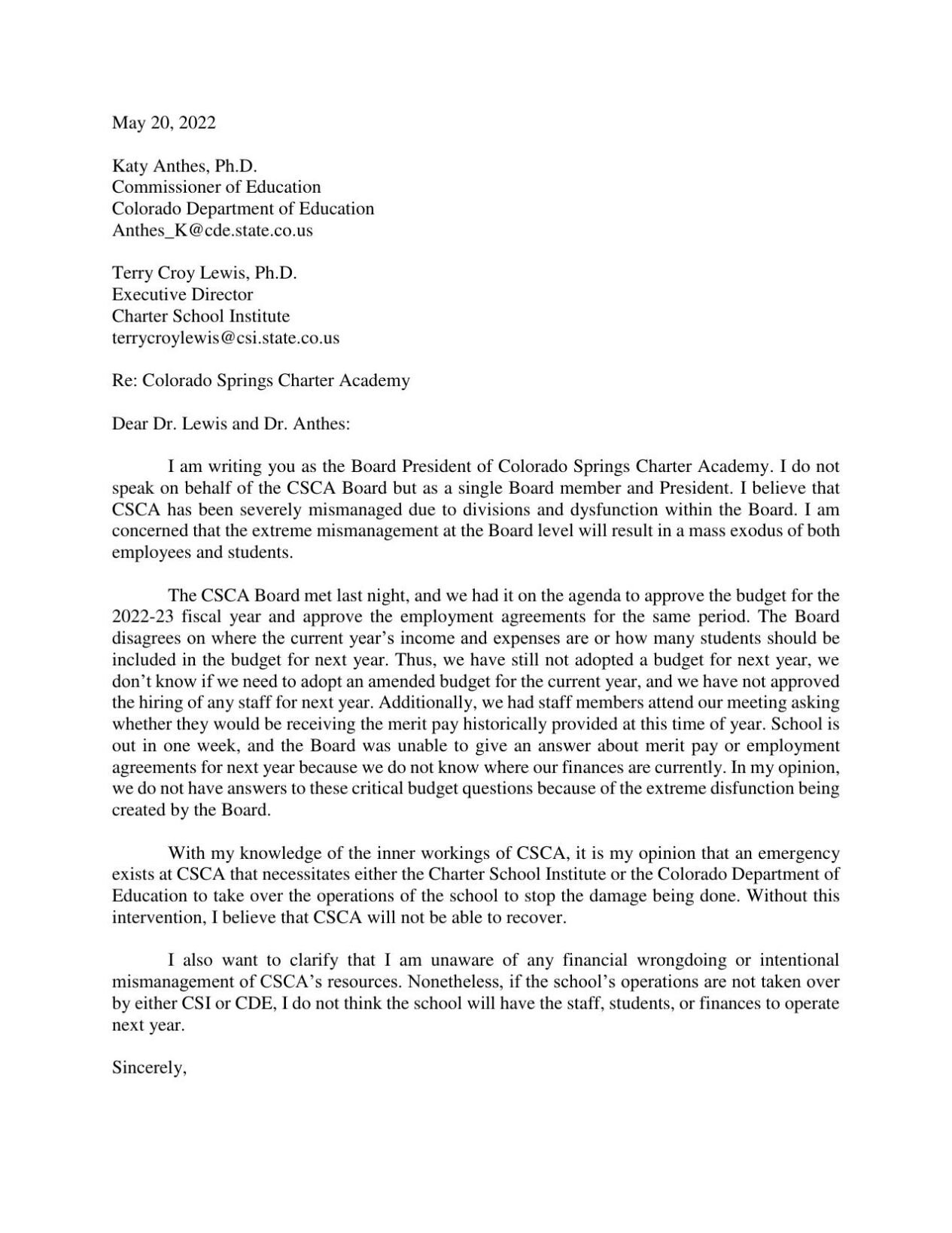 “He wasn’t our strongest board member,” she said of Merkle, who resigned last month.

Sparks said three teachers left at the end of this year.

Some of the problems with financial controls arose from a leadership void after several school administrators resigned late last year.

Former Head of School Dan Ajamian left the school in December after the board voted 4-1 in favor of a “motion to terminate, with option to resign,” according to the minutes from the Dec. 14 board meeting.

Three other top administrators, including a financial manager, left the school at about the same time, according to Sparks.

That left the school without a primary administrative decision maker, so the board voted to give Merkle and Groubert authority to manage all school operations until a permanent head of school was hired, “excluding approval signatures for the necessary accounts and credit items,” according to Dec. 16 minutes.

On Dec. 20, the board authorized Groubert and Merkle as signers on the school’s checking account, records show.

Colorado's student assessment scores dropped in 2021, but experts give pause

“The treasurer and board president were authorized by the board to sign invoices and checks and things that needed to be processed so people could be paid appropriately,” Groubert said.

Holmes was hired as interim head of school on Dec. 28 but did not have full decision-making authority until she was named permanent head of school in March. 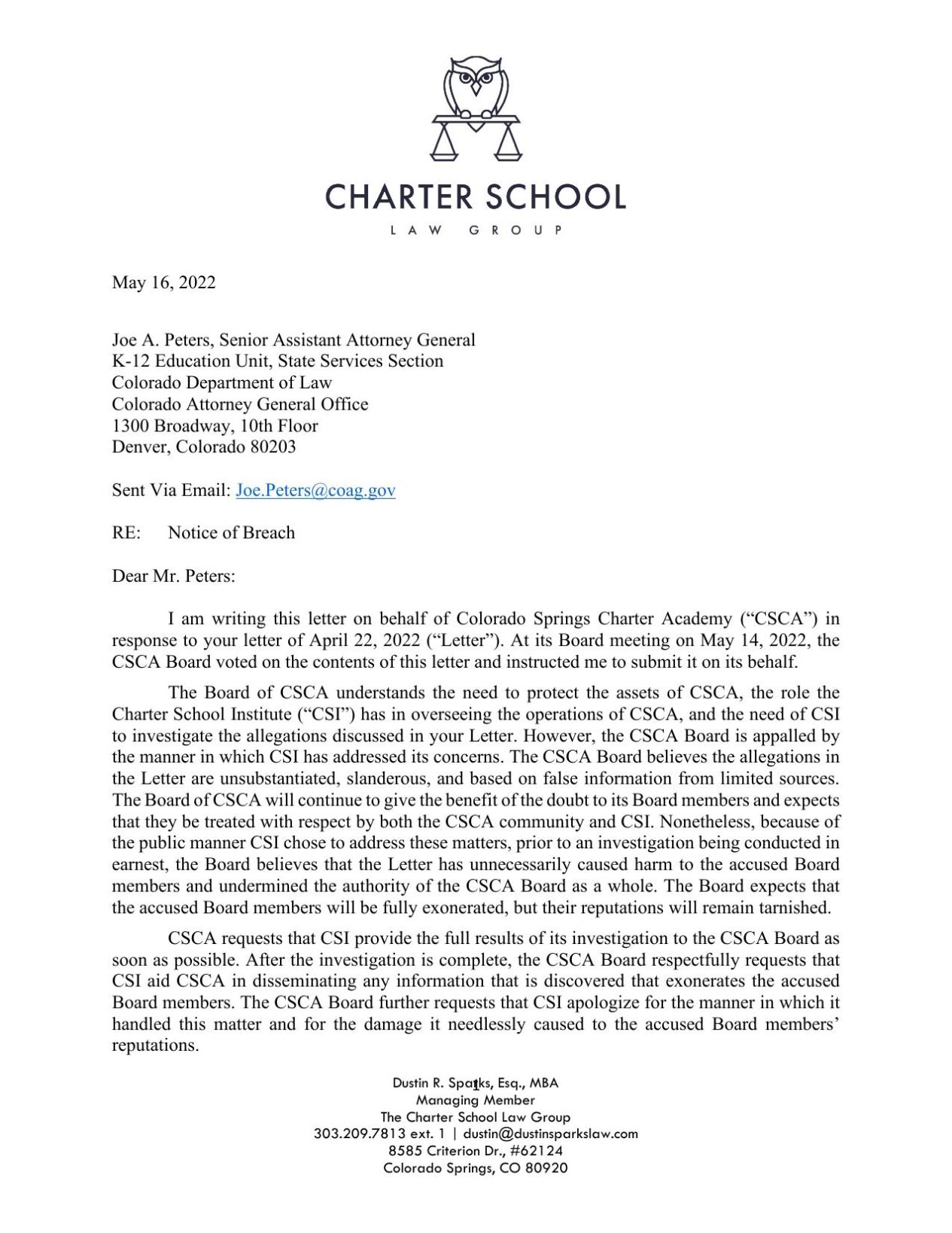 At last week’s meeting with the state commissioner, Sparks argued in favor of the school remaining independent, contending that the board members made a good-faith effort to manage the school’s finances in the absence of several administrators.

“I don’t think CSI has a strong case at all to take over the school,” he said.

He said that while the Attorney General's Office is correct and Groubert was an authorized signer on the school’s operating account, had edit access on the school’s accounting system, and a purchase card with a $50,000 limit, none of the funds were misused or misappropriated. She does not have any purchasing authority, according to the school's formal response to CSI.

The school has not finalized its budget for next year because it is still getting estimates on how much it will receive per student. The school is planning to have 375 students next year, Sparks said.

Groubert said she believes the school can continue to function without outside management.

“We’ve got amazing teachers who love their jobs, and we have some of the highest reading scores in the state,” she said. “We’ve accomplished this with an autonomous board, and I think we should be allowed to continue.”

When Rosa Beltran was going through high school in the late 1990s in a small town in southern Colorado, she never expected to graduate.

Colorado’s highest peaks draw plenty of attention and plenty of crowds, while down below some of the state’s most pristine, unspoiled nature affords true, splendid solitude.