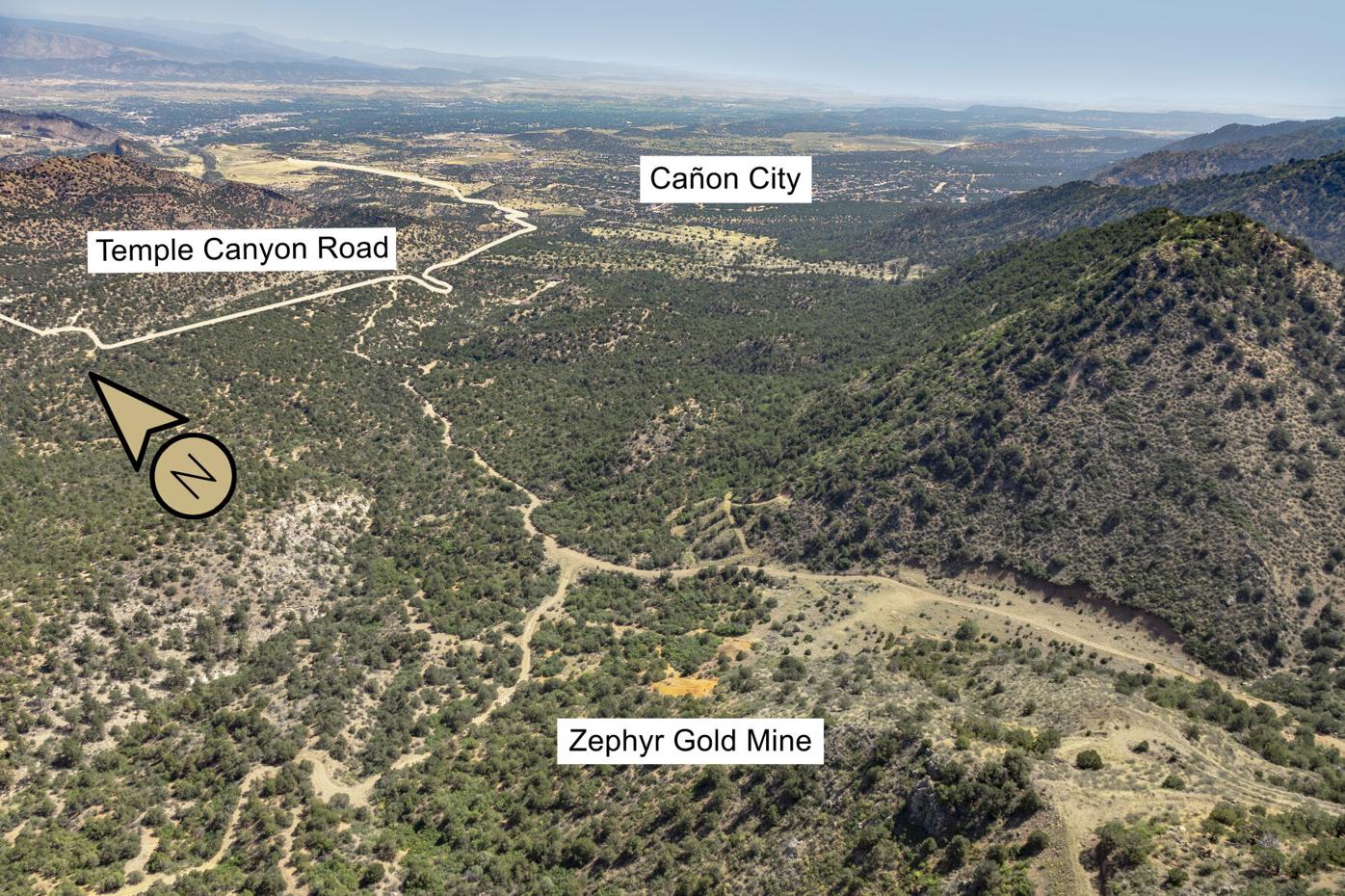 The proposed Dawson Gold Mine is pictured from above about 6 miles southwest of Cañon City in Fremont County. 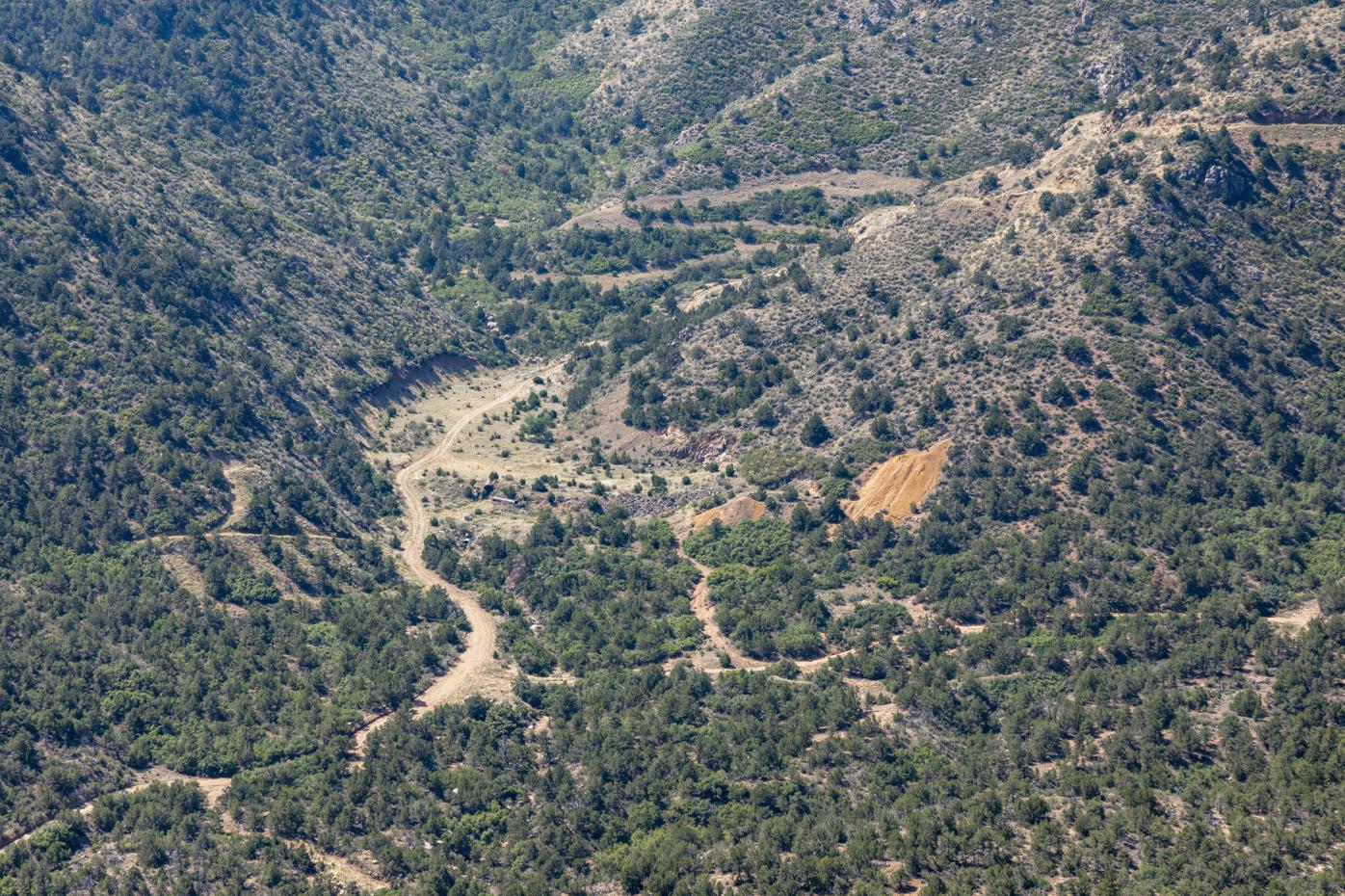 The site of the proposed Dawson Gold Mine is six miles southwest of Cañon City in the Grape Creek watershed. Grape Creek flows into the Arkansas River in Fremont County.

The proposed Dawson Gold Mine is pictured from above about 6 miles southwest of Cañon City in Fremont County.

The site of the proposed Dawson Gold Mine is six miles southwest of Cañon City in the Grape Creek watershed. Grape Creek flows into the Arkansas River in Fremont County.

The promise of gold brought people by the tens of thousands to Colorado and laid the foundation for statehood. High gold prices and demand from the renewable energy sector for materials like silver are now bringing speculators back to the state, looking to strike it rich.

The on-again interest in metal mining comes as the need for coal for power plants is declining and and could help buoy the industry, said Stan Dempsey Jr., president of the Colorado Mining Association.

"We are having an energy transition and that’s going to push the need for these minerals," he said.

For example, silver is a key mineral needed for solar panels because it is an excellent electricity conductor, Dempsey said, noting the Revenue-Virginius, a silver mine near Ouray, reopened this year after shutting its doors in 2015.

Last year, Colorado was 17th in the nation for its mineral production, valued at $1.62 billion, excluding natural gas, coal and other fuels, according to the U.S. Geological Survey.

The interest in new mines also underscores the need for higher environmental standards across the nation and in a state that's still battling the pollution from old mills and thousands of historic mines, said Jennifer Thurston, executive director of the the Information Network for Responsible Mining, a nonprofit. Currently, mine waste generated by extraction and processing is exempt from hazardous waste standards, according to the Environmental Protection Agency.

The Dawson Gold Mine, proposed six miles southwest of Cañon City, is facing some of those tensions. The Canadian company Zephyr Minerals is pushing for the underground mine. The company is promising millions in annual economic benefit to a community that is still living with contamination from the Cotter Uranium Mill, a Superfund site about two miles out of town that polluted the soil and groundwater with radioactive material.

Zephyr has applied for a permit through the state Division of Reclamation, Mining and Safety to mine 105,000 tons of gold mineralized rock annually that is expected to yield an estimated 27,000 ounces of gold, according to documents submitted to the state.

Operators forecast the life of the mine to be be five years, and during that period, 710,000 tons of rock could be extracted. Executive Chairman and Director for Zephyr Minerals Will Felderhof expects the annual economic benefit locally could be $17.5 million a year, according to the Cañon City Daily Record.

Even so, the Dawson would be a somewhat small operation, experts said. By comparison, the Cripple Creek and Victor Gold Mine, perhaps the most famous mine in Colorado, produced more than 25 million tons last year of mineralized rock, state production reports showed. During 2019, the company estimated it contributed $91.5 million to the economy through salaries and government payments, according to a report from mine-owner Newmont.

For some, the short-term economic benefits of the proposed mine do not outweigh the environmental concerns.

A state agency, residents and environmental groups all oppose the mine for numerous reasons: The owners have not secured water rights, the mine's tailings pose a risk to the watershed, the company has not stated how it will treat its water, and the mine could expand into lands proposed to become wilderness, among other worries.

The objections have trigged a public vote by the state's Mined Land Reclamation Board on the company's permit request that could happen in December, agency spokesman Chris Arend said.

Advocates pointed to the lack of water rights as one of the most fundamental permit flaws.

The Division of Water Resources, a state agency that administers water rights, submitted a letter in August opposing the mine permit until the operators can secure additional water rights.

"The proposed mining operation will consume groundwater through mining operations and require new non-exempt water well permits for the freshwater uses. These uses are expected to be out-of-priority and injurious to other water rights holders without a plan for augmentation," the agency said in a formal letter.

The Division of Reclamation, Mining and Safety could permit the mine pending its acquisition of water rights, but Zephyr cannot actively mine until it addresses the water rights concern, Arend said.

Zephyr did not respond to questions about water rights or other issues raised by neighbors or environmental groups.

The Information Network for Responsible Mining also raised technical concerns about the mine proposal, saying the the company did not provide information on how it would treat recycled water it plans to rely on, and, without treatment over time, the recycled water could interfere with the mining process. Zephyr may also be underestimating the amount of water the mine could use — projecting only 10% of what the rest of the industry uses, said Steven Emerman, an expert hired by the nonprofit, in a lengthy opposition report.

Emerman also pointed out that tailings from the mining process, a sandy wet material, will be stored in a risky location upstream from Grape Creek, a tributary of the Arkansas River.  If the tailings pile collapsed it could permanently pollute the watershed, said Emerman, owner of Malach Consulting, a Utah-based company that specializes in groundwater and mining.

The permit application also doesn't anticipate how things could go wrong or how to prevent them from doing so, he said.

"If I were the regulatory authority I would say the problems here are very fundamental. … You have to rethink this whole thing from the very beginning," he said.

If the tailings were soaked by a large rainstorm, Emerman said, that could lead to their liquefication, in which highly saturated soils flow like water and could reach Cañon City.

He also noted that if the 121-foot-high tailings pile is constructed as planned, it could be a risk to the watershed forever.

The risk to the watershed is one of the key concerns for local residents with the Arkansas Valley Conservation Coalition, a group formed to fight the mine proposal.

"Given a significant rain storm, that whole tailings pile could collapse, go down the mountain into Grape Creek into the Arkansas," said Mike Gromowski, a leader with the coalition.

The company is proposing to store the tailings over 10 acres and limit the water content in the waste, a method known as dry stacking. A report paid for by the company stated that the outside shell of the tailings will be hard and not susceptible to liquefaction.

Dry stacking is a modern method of tailings management and can minimize the risks associated with them, said Professor Corby Anderson, a mining expert with the Colorado School of Mines.

The company also states in its permit request that it plans to build diversion channels around the tailings to capture clean water. Potentially polluted water that seeps through the tailings will be captured in a pond, the company said.

When it comes to the company underestimating water consumption, Michael Henderson, a research professor in the Mining Engineering Department at the Colorado School of Mines, said underground mines tend to have too much water rather than not enough because they function like a giant underground wells.

All of these questions around water are critical because new mines in Colorado must have a plan that will protect water and the environment, said Thurston, the executive director of Information Network for Responsible Mining.

"Anybody whose water rights are downstream or who has a well in that area is potentially impacted by this mine," she said.

For opposition activist Gromowski, the recreation and tourism industry in Fremont County is far preferable to the mining industry, and could be harmed by the Dawson. The proposed mine is just north and east of a proposed wilderness area, just south of Bureau of Land Management property considered an Area of Critical Environmental Concern, and southwest of Temple Canyon Park, a camping and hiking area.

"Recreation is self-sustaining in its perpetuity, unlike a mine that is going to be here five, maybe 10 years," he said.

The company also has mining claims with the wilderness study areas and if they disturb those areas, the property could lose the wilderness characteristics needed for preservation, Thurston said. The company is not asking for a permit in those areas, but if they get a permit to mine on their private property, they could apply for an amendment in the future to mine on public lands.

"It's easier to amend a permit than in it is get a fresh one," she said.

The interest in mining, particularly uranium and vanadium, has escalated in Colorado in part because of the federal interest in building up the national uranium reserve and because vanadium can be used in batteries, Thurston said. The state is also home to rare earth minerals, necessary for all kinds of electronics, and silver, key for the renewable energy industry.

However, both Thurston and Dempsey said the regulatory road for a new mine in Colorado can be long. Environmental, social and governance goals are also becoming more important to the mining industry as a whole, and banks and other lenders are asking for a high commitment to those goals, Dempsey said.

Thurston would prefer to see updated regulations that would make it easier for the public to participate and understand the process, and more stringent rules to govern tailings.

The country also needs a national minerals policy to guide mining, she said.

"There is no comprehensive view going on that looks at how much we need across the board. … Are there certain places that should be off limits?" she said.

Some mining proponents say that the United States should extract more metals domestically and reduce dependence on China and other foreign countries.

"I think those opportunities for jobs and contributions to the local economy are really important," Henderson said.

The owners of Colorado's largest gold mine near Cripple Creek have taken the first step to begin underground mining just north of the mountain town, but there are many more hurdles to clear before the first ounce of gold is recovered, according to a mine spokesman. Cripple Creek & Victor Gold Mining Co., acquired in August by Greenwood Village-based Newmont Mining Corp., is seeking approval from Colorado regulators to expand the boundaries of its mining operation to include the site a half-mile south of the Cripple Creek Heritage and Information Center and the Molly Kathleen Mine tourist attraction.