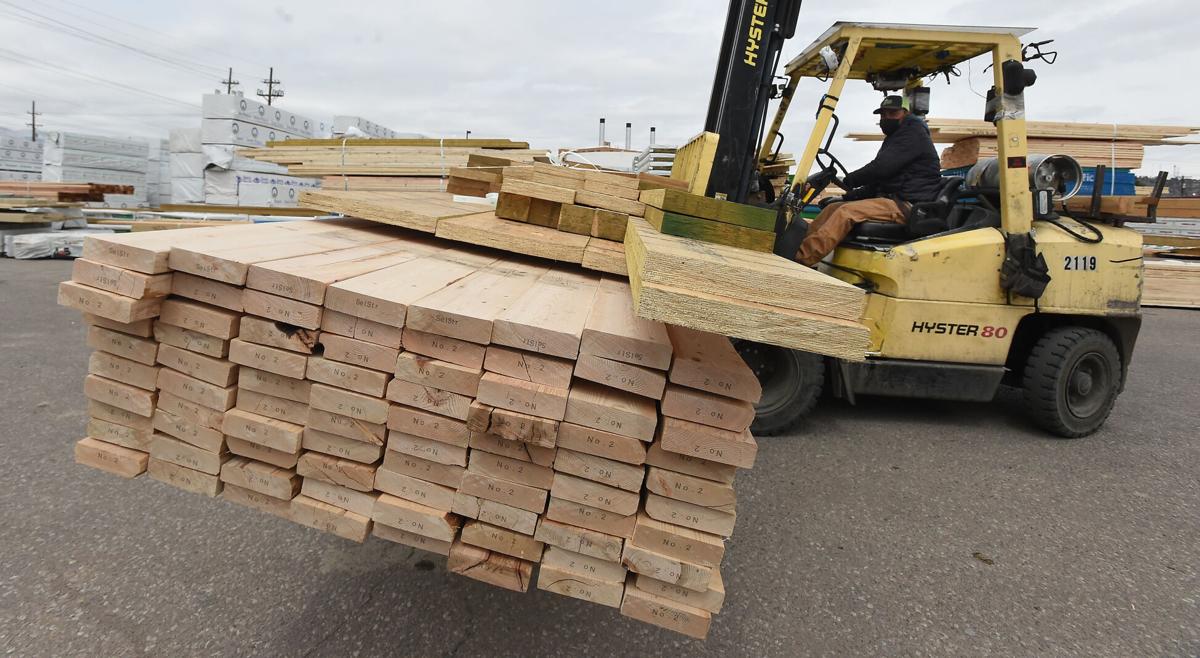 Stacks of lumber are moved last week by employees at Foxworth-Galbraith Lumber & Building Materials on North Nevada Avenue in Colorado Springs. Building material costs, particularly lumber, have soared over the last year, leading to spikes in the cost of new homes, decks, home remodelings, hotels, offices and retail buildings, among other residential and commercial projects. JERILEE BENNETT, THE GAZETTE 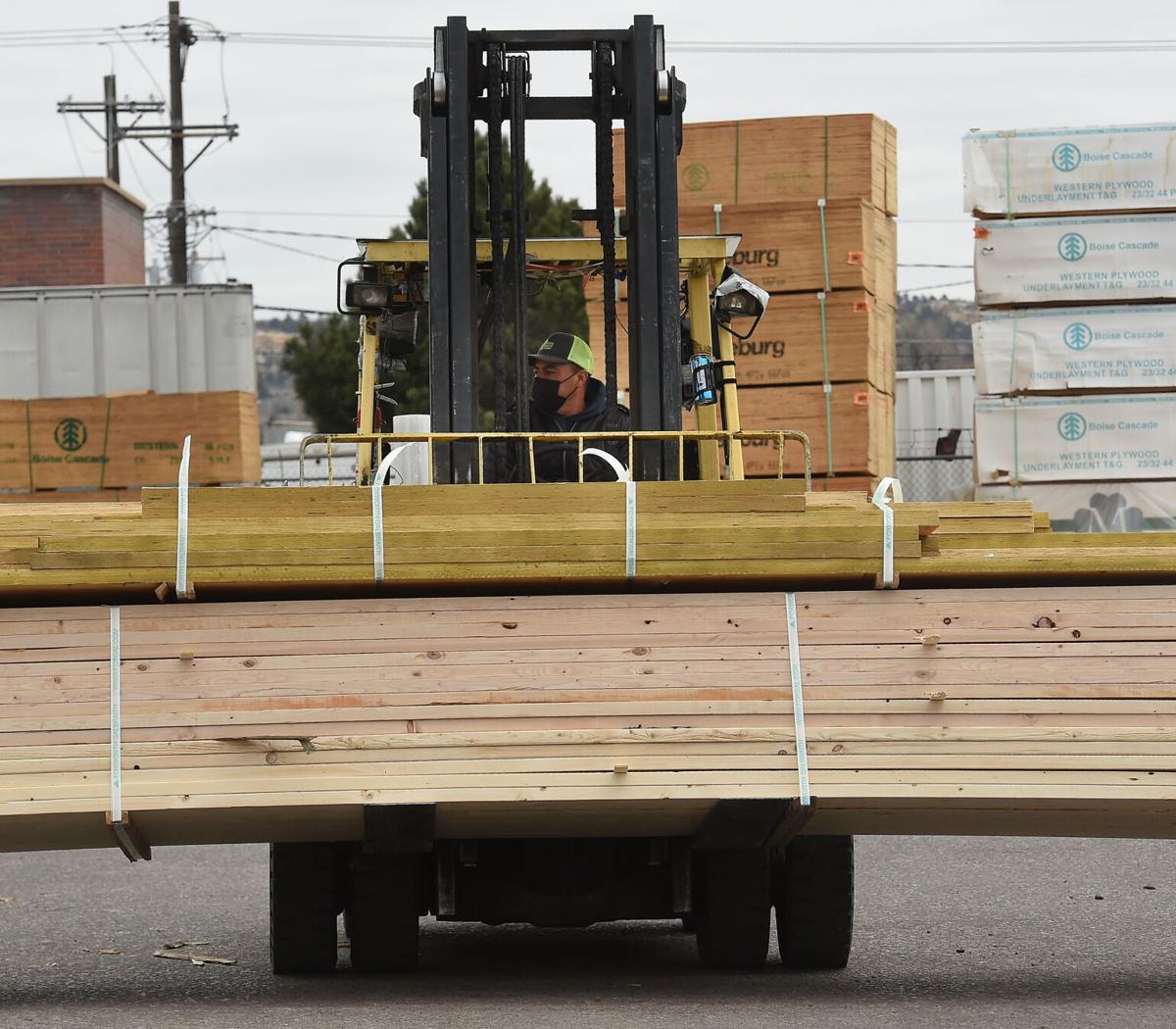 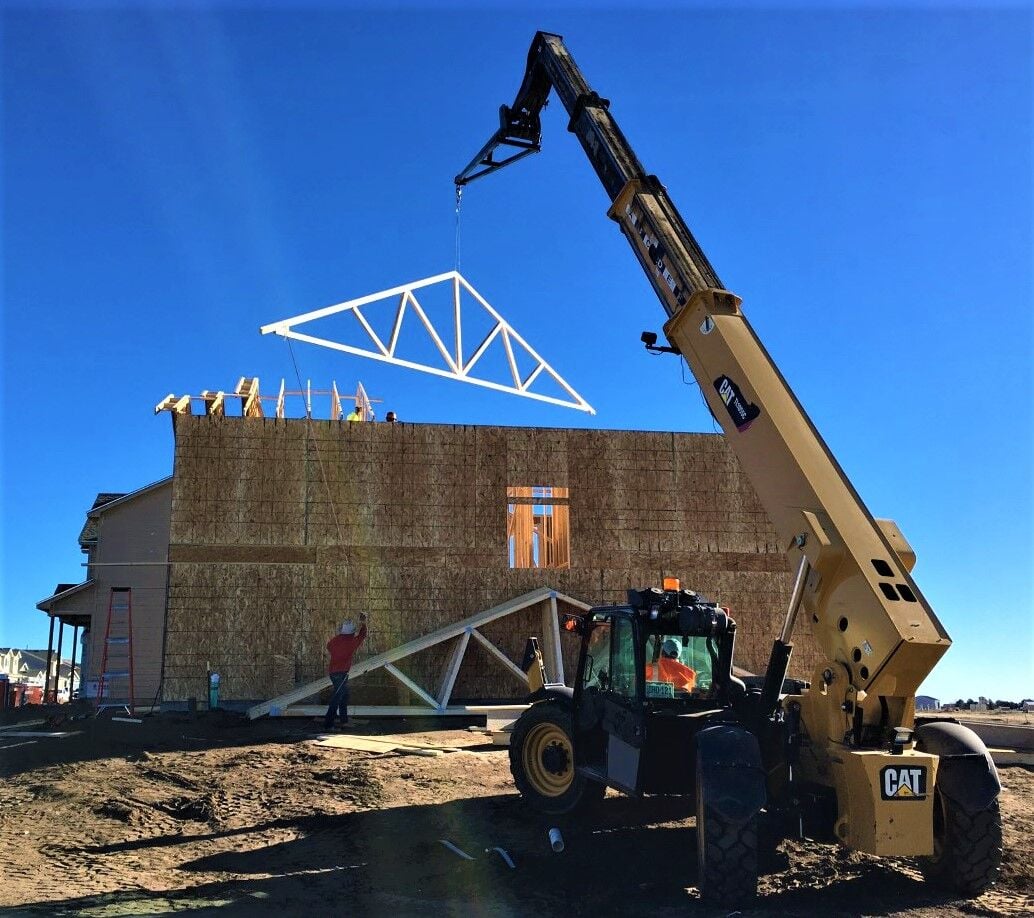 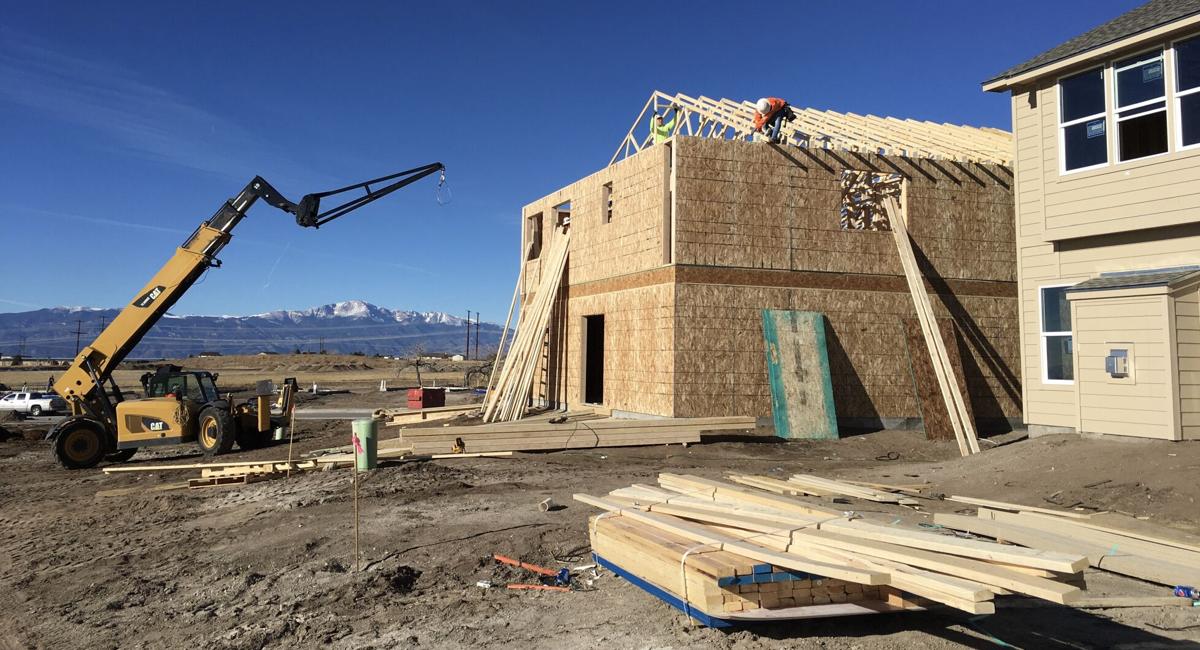 Stacks of lumber are moved last week by employees at Foxworth-Galbraith Lumber & Building Materials on North Nevada Avenue in Colorado Springs. Building material costs, particularly lumber, have soared over the last year, leading to spikes in the cost of new homes, decks, home remodelings, hotels, offices and retail buildings, among other residential and commercial projects. JERILEE BENNETT, THE GAZETTE

Buying a home from a local builder? Hiring a remodeler to construct a backyard deck or finish your basement? Installing a wood privacy fence on your own?

Grab your pocketbook and get ready to dig deeper than the hole for that new fence post.

At Vanguard Homes in the Springs, prices spiked an average of $80,000 per house from July 2020 to February of this year, said owner and president Mark Long.

Higher costs for land, labor and insurance are part of that figure, but lumber alone added $26,000 — nearly one-third of the $80,000 increase, Long said.

Vanguard's jump in lumber costs nearly matches an estimate from the National Association of Home Builders, which said two months ago that soaring lumber costs have added $24,386 to the price of an average single-family home since mid-April of last year.

"Every other dadgum thing that we touch, nothing is going down in price," Long said. "We're at the point where we are raising prices — and it's a moving target — monthly if not bimonthly or semi-monthly, to try to anticipate the amount of price raises we have."

Classic Cos., the longtime Colorado Springs homebuilder and development company, has raised prices by $35,000 to $40,000 on an average house from last year, with lumber accounting for about $25,000 to $30,000 of that boost, said Joe Loidolt, who heads homebuilding for Classic. Like Vanguard, Classic has seen land, labor and other costs also rise, he said.

"But lumber far and away is the biggest driver," Loidolt said.

Higher costs aren't just affecting the residential side of the construction industry.

"We typically see increases in costs every year, but the increase in costs this year is so extraordinary that it's requiring us to rethink our approach to material selection and to building system design," Colarelli said.

Instead of lumber, for example, Colarelli said his company is using light gauge steel for framing on some projects. Steel is typically more expensive, but not these days, he said.

Pace of homebuilding in Colorado Springs edges up

Why have lumber and other building material costs risen so much? Blame the COVID-19 pandemic, in large part, industry experts say.

Early on in the pandemic, some lumber mills shut down because of government stay-at-home orders. Or, social distancing rules and other safety measures restricted and delayed how employees could perform their jobs, which caused lumber production to slow.

Lumber supplies then tightened, yet the demand never stopped because of a robust housing market.

Historically low mortgage rates and a shortage of homes for sale on the resale side of the market led many buyers to opt for new homes.

Likewise, employees working remotely at home for months during the pandemic took note of repairs and upgrades they had put off and now wanted to do.

Or, they decided they needed an addition or finished basement to create more space — especially as everyone in their family was stuck at home, including kids who were learning remotely.

The result: sticker shock for builders, contractors and, ultimately, consumers.

"The homeowner takes a look at these new estimates and their jaws drop, rightfully so," said Greg Wickham, owner of Wickham's Workbench, a longtime Colorado Springs contractor and remodeler.

The demand for home remodeling, repairs and other work hasn't stopped and his business remains strong, he said. Still, he's lost some jobs or had customers balk at the steep price hikes he's presented to them compared with what they had expected to pay, Wickham said.

To offset surging costs, Wickham said he's made adjustments. If he bid a job before prices escalated, he stuck with his original estimate and absorbed cost increases for lumber and other materials. He's also eliminated his markup on construction materials as a way to curtail escalating prices for clients.

"The prices are scaring customers away," Wickham said. "All you can do is different techniques like I'm talking about. (Eliminating) the profit margin on the materials. Different things that you can do to sweeten the pot and try to make up for some of this craziness in the material world.

Gary Seabolt of Pikes Peak Construction, a small general contractor in the Springs, said his company recently purchased a single sheet of 4-foot by 8-foot plywood from a local home improvement store — the same kind of material that do-it-yourselfers might purchase for a weekend project.

A client who recently was referred to Pikes Peak Construction wanted a bid on a deck, Seabolt said. The estimate the company provided was about $15,000 more than the client had budgeted. The client decided against the project.

"Even me, myself, I kind of choked at the price that we got because I wasn't expecting it to be that high," Seabolt said. "It was a shock to them."

Some customers might blame contractors and remodeling companies for the spike in prices, but businesses like his can't do much about the rising cost of building materials, Seabolt said.

Another month, another record for home prices in Colorado Springs

"I can completely see where the consumer believes that," he said. "It's not your contractor that's jacking that price up. ... That's a very, very real thing for the construction industry right now. And it's tough."

Homeowner Zack Stys, who lives in the Meridian Ranch development in unincorporated El Paso County, northeast of Colorado Springs, has a three-car garage attached to his house.

He said he wanted to add a free-standing garage that would be big enough to house recreational vehicles, which would appeal to buyers should he ever sell his house. He also wanted extra storage space and room for a shop where he could work on bikes, toys and cars.

Based on what a neighbor had paid for a similar structure a few years ago, Stys said he expected the garage cost to be around $50,000 to $60,000.

But when he received estimates from three contractors, each bid came in at more than $100,000. All cited the soaring cost of lumber for the price escalation.

"That was more than I wanted to pay at the moment," Stys said. "So I decided to hit the brakes on that project for now and see what the market does in a year or two years. We'll see where it goes."

Many homebuyers, however, aren't holding off their purchases of new houses. Through the first quarter of 2021, building permits pulled for the construction of single-family homes in El Paso County were nearly one-third higher than the same period last year, Pikes Peak Regional Building Department reports show.

The furious demand for new homes has remained strong, in large part, because of the shortage of homes on the resale side of the market. Over the past few months, resale inventories have plunged to their lowest levels in at least 25 years, according to Gazette historical data.

As a result, the desire for a new home trumps concerns about higher prices, said Long, of Vanguard Homes.

"Their sticker shock is very much secondary to their desire to get a house," Long said of new homebuyers.

It's been the same on the commercial side of the local construction industry; in 2020, the dollar value of building permits for new commercial projects — such as offices, banks, shopping centers, restaurants, manufacturing plants, schools and hospitals — totaled $828.4 million or more than 55% higher than the year before.

Colarelli, the general contractor, said many of his clients have continued with their projects, despite rising building material costs. He did, however, have one client cancel a planned hotel in Colorado Springs and another scrap an apartment project in Denver.

"Frankly, I'm surprised it's not happening more," Colarelli said. "But I think owners are able to take advantage of low interest rates to help manage the change in construction costs, to some extent."

At some point, Colarelli said he expects developers and commercial project owners to say enough is enough and that they can no longer accept such steep price increases.

Eric Swanson, general manager of Wells & West General Contractors in Colorado Springs and board president of the El Paso County Contractors Association, isn't so sure.

A believer in the economics of supply and demand, Swanson said he doesn't foresee a slowdown over the next year in the demand for construction materials, especially as global economies recover from the pandemic. That demand will keep prices high, he said.

"If we and the rest of the world come out from under COVID, it's going to open up demand everywhere," Swanson said. "All of the suppliers will be trying to keep up and catch up. ... I don't see in the next year us seeing a slowdown in international demand. I don't see that allowing for us to have a reduction or a slowdown in the increase in costs."

For now, those rising costs are likely to trickle down to end users — retailers who rent shopping center storefronts, tenants in office and medical buildings and consumers who shop at stores, eat at restaurants or stay in hotels, industry members say.

"Eventually, that's where it all rattles," said Jim Johnson, owner and president of GE Johnson Construction Co. in Colorado Springs. "If it costs us more to build a building, the rent is going to be more because of the expense in providing that environment. Whether that's an office building, a hotel or a medical office building, the owner, the developer is going to want to recover their investment.

"Eventually, if you follow it all the way through, yes, of course, the user is going to being paying more," Johnson said, "Whether that's a hotel guest, a patient or an office company."

Residents who have been smiling about skyrocketing property values in El Paso County will get confirmation of that soon, but it comes with a p…