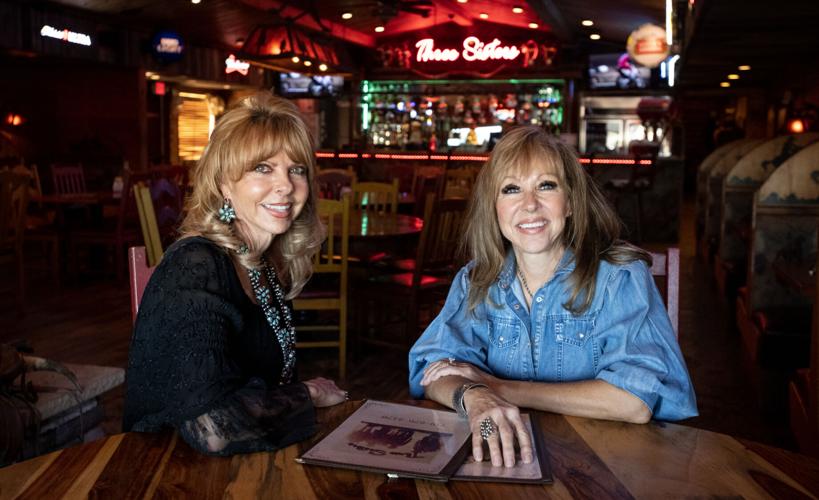 Jamie DeVencenty, left, and Paula Williams, two of the trio of sisters behind Three Sisters Tavern and Grill in Colorado City, pose in the restaurant. 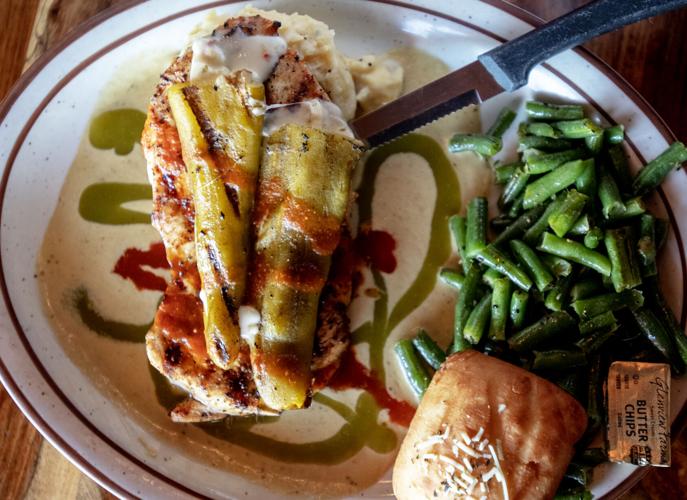 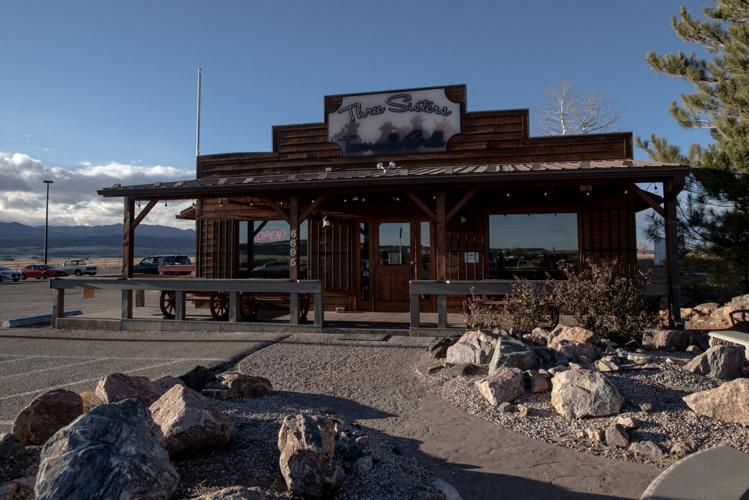 With it’s old-Western, saloon appearance outside and the Western-themed decorations inside, Three Sisters has become a favorite of local and travelers passing through alike. 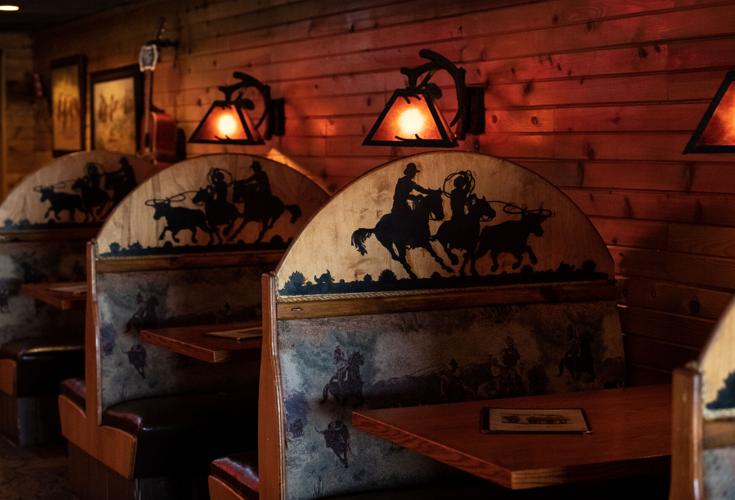 Light shines through the window onto booths inside Three Sisters. 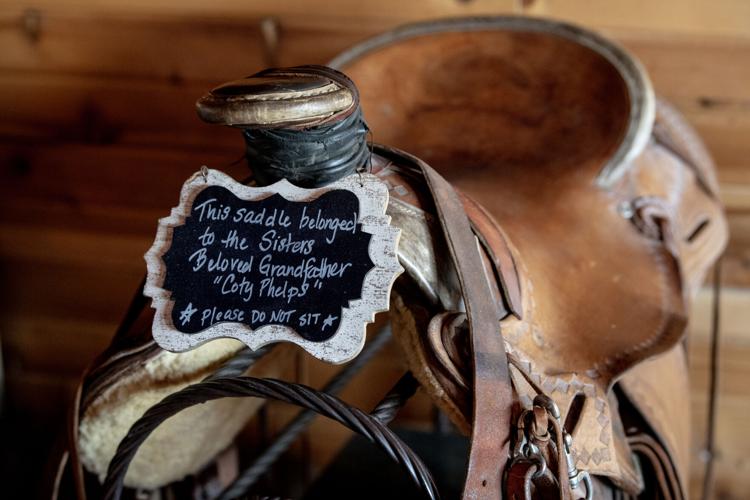 All around are Three Sisters’ family relics, such as the sisters’ grandfather’s saddle pictured here.

Jamie DeVencenty, left, and Paula Williams, two of the trio of sisters behind Three Sisters Tavern and Grill in Colorado City, pose in the restaurant.

With it’s old-Western, saloon appearance outside and the Western-themed decorations inside, Three Sisters has become a favorite of local and travelers passing through alike.

Light shines through the window onto booths inside Three Sisters.

All around are Three Sisters’ family relics, such as the sisters’ grandfather’s saddle pictured here.

COLORADO CITY • A Tuesday afternoon finds the sisters in their restaurant with flutes of Champagne.

She and Jamie DeVencenty are celebrating nothing in particular — nothing besides being together at their favorite place, which is indeed worth celebrating. They only wish the third sister behind Three Sisters Tavern and Grill were here.

They call Darla Watson the “Texas Tornado,” because she lives in Texas and, by her own account, “I’m usually blazing through. We really do it up.”

Just as the sisters learned hard work growing up on the family ranch near Pueblo, they learned the importance of a good time. DeVencenty’s husband, Rocky, has put it best: “Sisters by blood, best friends by heart.”

South of Pueblo today, if one is so curious to meet the three sisters of the wood barn-looking Three Sisters off Interstate 25, and if one so happens to find all three sisters together inside, one is treated to the kind of warm, spirited welcome one only knows from a warm, loving home on the range.

One might find a little fire for warming up inside. Patsy Cline, Dolly Parton or George Strait might be singing softly over the speakers. The staff will be in cowboy hats and Western shirts, matching the local old-timers. The portions will be big. The steak, chicken, burger, green chili and bread pudding will be just right — a taste of home.

Oh yes, Watson wishes she could be here this afternoon.

“It’s my favorite place,” she says on the phone from Texas. “It’s family. It really represents that.”

There’s Granddad’s saddle. There’s Daddy’s guitar on the wall. There are the branding irons and the trophies of a big-prize family. Daddy rode bulls. Momma was Miss Rodeo Colorado. DeVencenty went on to jump horses; now her daughter is winning world titles.

But the restaurant isn’t trying to show off the family as much as it is trying to hold on to an ideal that the sisters see fading up and down I-25. “Just trying to keep the West alive,” DeVencenty says.

Williams is still living it. She married a cowboy, and together they tend to the animals and land not far from the restaurant.

DeVencenty, meanwhile, married a pilot. She and Rocky went on to own and operate a flight-for-life and air charter business along with a fueling service out of the Pueblo airport.

The sisters blame Rocky for the enterprise none of them saw coming about 10 years ago. They loved the nostalgic, little building there in Colorado City, that was all.

“The next thing we knew,” DeVencenty says, “he was putting up a sign: ‘Three Sisters Restaurant.’”

He was getting a liquor license, the story goes, when he got some advice about the flyby location in the countryside: “You’re gonna need a lucky penny.”

A lucky penny, perhaps. But more so hard work that the sisters knew all too well. At the family farm, there were cattle to feed and others to round up, hay to bale among other chores around the clock.

“It doesn’t go away,” Williams says of that work. “It’s seven days a week.”

Three Sisters was initially open four days a week before the sisters changed to seven. A lot of money was lost in that hard, first year. But the sisters never thought about quitting.

“It’s the same thing with ranching,” DeVencenty says. “You just get up the next day.”

The restaurant hosts live music now and then. Those nights recall others from the sisters’ upbringing, when the moon hung high over the farm.

“My grandma had 10 kids, and every guy who walked in had a guitar,” Watson recalls. “We’d all sing together. They’d play the guitar and the piano. ... When I think back on that, it feels kind of surreal.”

And sometimes today, that’s how it feels back at her favorite place.

Among appetizers ($10-$14), the tempura fried avocado is a favorite. So are the pepper jack cheese sticks, lightly battered and fried, and the local goat cheese that’s pan-seared and served with tomato, sweet basil and garnished with a balsamic reduction.

The Twisted Sister ($19) is the beer-marinated, smoked and sauced brisket sandwich complete with pepper jack cheese. The Little Brother ($16) — named for the three sisters’ other sibling — is the sausage sandwich on a hoagie, with cheese, mustard and lettuce. The apple chicken salad wrap is a tender breast diced with apples, celery and dill pickle between a chipotle tortilla.

Along with a rib-eye and New York strip, the kitchen makes a pub steak — a beef shoulder seared with spices, baked and smeared with a specialty poblano cream sauce. Steaks ($28-$33) are served with mashed potatoes, green beans, roll and salad. Chicken fried steak and chicken fried chicken other favorite entrees.

That poblano cream sauce, along with a cheese-stuffed pepper, also completes the chicken relleno ($20). That’s on the side of the menu with fresh tamales ($16) and burritos ($18).

The taco salad ($17) is popular. So is the steak salad ($20), tossed in the house garlic vinaigrette with apples, cucumbers and bleu cheese crumbles.

The sisters insist you can’t leave without bread pudding, a recipe inspired by their grandma. It’s perfected with a bourbon cream sauce.

Everyone's favorite Colorado restaurant experience makes its comeback in May after being closed for almost three years, according to a Thursday news release.

More from this series

Craving Colorado: A dive into the culinary character of the Centennial State

Hey Colorado foodies, this one's for you. In this series, features writer Seth Boster takes readers on a monthly adventure into Colorado's dyn…